Oxford Dictionaries defines a masochist as “a person who enjoys an activity that appears to be painful.” Until recently I thought this term was reserved for kinky sex, but then I attempted to review Sekiro: Shadows Die Twice, and now I’d consider gaming to be one of these activities. Sekiro: Shadows Die Twice might be the hardest video game I have ever played.

After hours of frustration and profanity, I managed to defeat the Unchained Ogre, before pushing forward to struggle with the next mini-boss. Tempers flared. For a while there, the idea of bringing the human race to its untimely end felt like a reasonable course of action.

Thankfully I had a Plan B – the Hirata Estate level; an optional flashback exploring a memory of our hero “the One-Armed Wolf.” My idea was to play this level, earn some experience, level up and return to the main game stronger and more capable. It turned out that this flashback was harder than what came before. 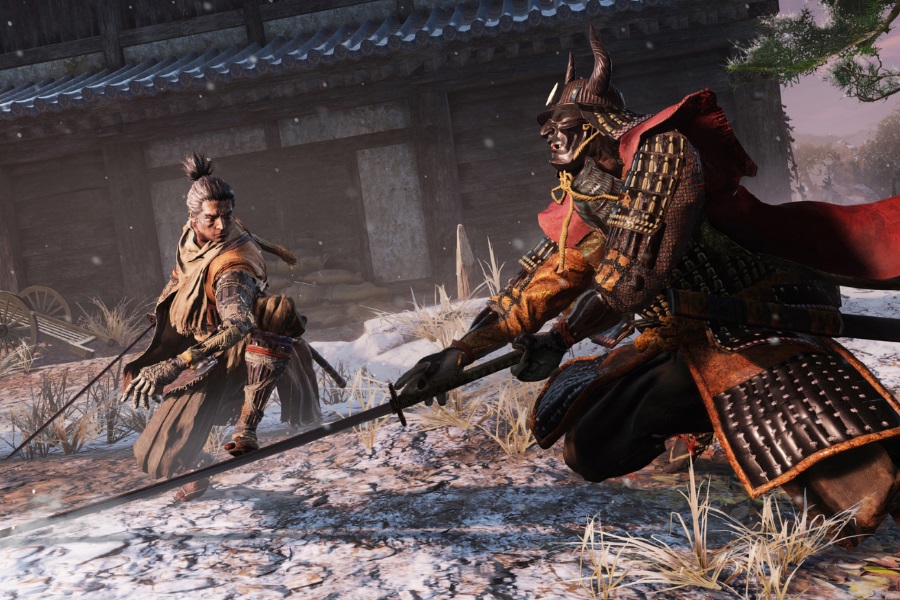 With no Plan C to fall back on, I came to realise that I would never finish this game in time for a review. I was Rocky on the mat. Bloodied. Defeated. The game being Apollo Creed, leaving the ring victorious. It’s safe to say Sekiro: Shadows Die Twice is out of my league. Though in my defence, the opening chapter is misleading.

I first played Sekiro: Shadows Die Twice at “Sword School.” It was a preview event where the media folk in attendance learned the history and craftsmanship of the katana, before being treated to a traditional sword demonstration and brief hands-on with the real thing. Sword School wrapped up with me playing a chunk of Sekiro from its beginning.

As you may know, Sekiro: Shadows Die Twice comes from Japanese developer From Software – the studio best known for their work on the punishing Dark Souls trilogy and PlayStation 4 exclusive Bloodborne. I have played and finished Bloodborne and Dark Souls 3, though I admit there were times where I doubted my ability to reach the end credits.

I expected a similar challenge from Sekiro: tough but doable. That’s why I was pleasantly surprised to discover that the opening hour of Sekiro was survivable. In fact, I only died twice during the hands-on. The stress factor was low. I was able to enjoy the traditional Japanese setting and fast-paced combat without being overly concerned about death. Best of all, there were no souls to bank.

Days go by, and a review code lands in my inbox. This time I played beyond Sekiro’s opening chapter, and it turned out I couldn’t have been more wrong. The opening was basically a tutorial, and straight afterwards the difficulty increased about a bajillion percent. And there are souls to bank like in Dark Souls. They’re simply referred to as EXP and come into play at the same time Sekiro starts getting difficult.

Now knowing what I do about Sekiro, I’m offering a slight nod of approval to anyone who has managed to finish this game. It is no small feat. Although I do question your sanity. Was it lost during or before Sekiro? Why do you punish yourself like this? And are you aware that stress can lead to all sorts of health problems? If you come across someone who says this game is easy, call them out for being a liar.

As this was supposed to be a review and I have so far spent over 500 words complaining about the difficulty, it’s time to share what I liked about Sekiro from the brief amount of content that I have managed to see.

As a fan of Japanese culture and cinema, I adored the 1500s Sengoku setting; a bloody period in the nation’s history – So there’s plenty of Samurai and Shinobi to go around. There’s also a heavy dose of supernatural and mythology, tapping into Japanese lore to build a familiar, yet unique game world. Plus all of the dialogue comes across in Japanese with English subtitles adding to the authenticity.

Despite its difficulty, Sekiro’s combat is technical and fun. The sword-based combat is much faster than Dark Souls and Bloodborne. The One Armed Wolf’s prosthetic arm is equipped with a grappling hook that adds new levels of verticality to the environments. His arm can also be enhanced with weapon attachments like shurikens, an axe and a flamethrower. Finally, the stealth mechanic adds new ways to strategise during combat scenarios. Splinter Cell it is not, yet sneaking behind an enemy and impaling them with your katana is often viable and the recommended course of action. I found the new gameplay mechanics to be welcome additions to the “Soulsborne” genre.

Even though death is swift and comes often, Sekiro: Shadows Die Twice never feels unfair. I would love an option to change the difficulty, just so I can see everything on offer, but that may be beside the point of this game. I believe From Software wants to punish our arrogance, for having ever felt that building the muscle memory and reflexes required for one game would automatically make us good at another. If that was their intention, From Software has succeeded.

Sekiro: Shadows Die Twice was played on PlayStation 4 with a digital review code provided by the publisher.