Since MachineGames rebooted Wolfenstein in 2014, the classic franchise has, in my opinion, set the standards for single-player first-person shooters. Following a prequel in 2015, and sequel in 2017, the latest entry, Wolfenstein: Youngblood, ditches the formula that made the previous games so memorable and instead, follows the design of several games considered problematic. Thankfully the shooting remains as tight as ever, and now you can play co-op with a friend.

The year is 1980. In this alternate history, the Reich won the war and long term Wolfenstein hero BJ Blazkowicz has gone missing during a secret mission into Nazi-occupied France.

On an impulse, BJ’s twin daughters Jessica and Sophia steal an FBI chopper, a pair of power suits and fly from Texas to Paris to join the French resistance and search for dear old dad. Of course, much Nazi blood is spilt along the way.

The gameplay is fast and kinetic. The weapons are larger-than-life, and the shooting feels tight and familiar. BJ’s power suits returns in Wolfenstein: Youngblood and are worn by both Jessica and Sophia, providing the girls with a double jump, a cloak for stealth approaches and a stomp ability for breaking through environmental objects or Nazi heads.

Apart from making it easier to kill Nazis, particularly the ones in mech suits, playing co-op gives you and your partner the ability to gift each other health and armour to help keep both players alive in what is often an incredibly difficult game with very few checkpoints. Playing solo, an AI partner replaces that friend and does a decent job of killing enemies but is atrocious at gifting health or armour and is only so-so at reviving.

The 1980s setting is not as retro as Stranger Things but does offer fun throwbacks like synth-heavy German pop music and collectable VHS covers of fake movies. Nor is this alternate history oppressive like The Man in the High Castle. Despite the harrowing nature of Wolfenstein’s story, the tone is kept light as the sister’s joke around in 80’s jargon, and you and a co-op partner will likely talk some shit along the way.

It would be a huge oversight to pick up Wolfenstein: Youngblood and expect the cinematic, story-focused experience of the previous games. Youngblood surprisingly has more in common with ‘looter shooters’ like Destiny, Borderlands and The Division.

The linear missions of previous games have been replaced with a series of hub worlds. They vary from the streets to slums and industrial complexes, to the offices of high-ranking officials. Each area is distinct enough that it stands out from the previous ones.

The problem is missions revisit areas over and over. Soon as you leave, even without a loading screen, enemies respawn, and you will have to clear them out all over again. There are only so many times you can replay an area before it grows tiresome and running through hordes of Nazis becomes more appealing than killing them again.

This story is also lacking in depth. The previous Wolfenstein game The New Colossus is jammed full of memorable characters and WTF moments. Youngblood has neither, and there are minimal story cutscenes throughout the 15 or so hour campaign. Also, there’s no overarching villain. Considering The New Colossus had one of the greatest video game villains, this opportunity was a sorely wasted.

Light RPG elements appear in the form of experience points earned for taking down enemies and completing objectives. XP points are used for unlocking power suit upgrades, many of which feel as though they should have been available from the start.

Micro-transactions make an appearance and are completely pointless. Littered throughout the world are silver coins that act as currency for upgrading weapons and unlocking cosmetic skins for weapons and the power suits. 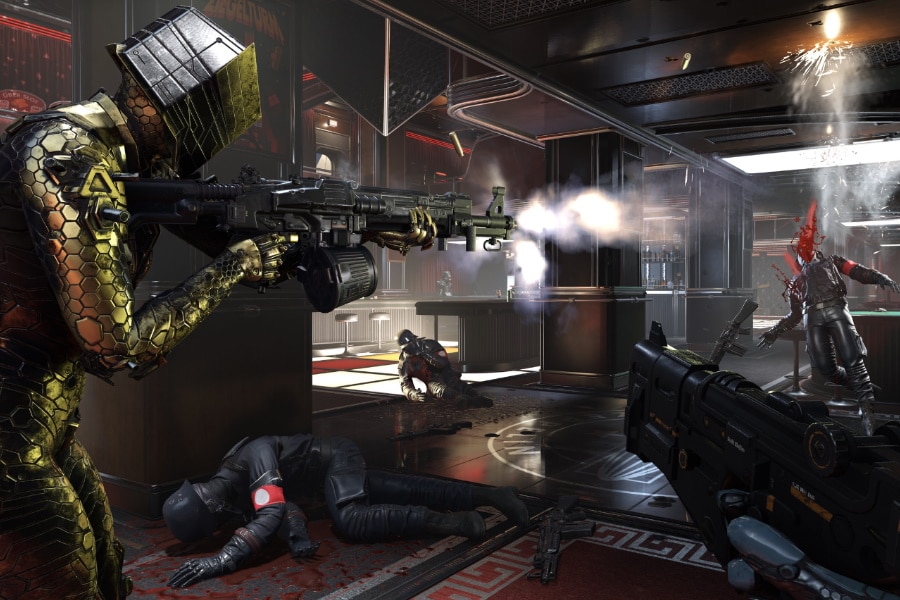 Following the completion of a mission, I was never short of coins to spend on weapon upgrades. And once you’ve purchased a paint job a weapon or the power suit, there’s little reason to buy another one. So why are their micro-transactions? If not for a few impatient gamers with money to burn, I couldn’t tell you. The good news is that you can easily experience everything on offer without spending an extra cent.

As a co-op shooter, Wolfenstein: Youngblood excels, although the lack of story and character development means it never quite reaches the highs of its predecessors. The looter shooter elements feel like an unwelcome addition as they never reach the standards set by their contemporaries.

As looter shooters receive steady streams of updates, there is a possibility that Wolfenstein: Youngblood could evolve into a great game over time, but for now, it remains an average game, and that’s a real shame.

The Deluxe Edition comes with something called ‘Buddy Pass’ where you can invite a friend to download the game and play along with you for free. It’s almost two for the price of one and is the perfect way to try out the game if still in doubt.

Wolfenstein: Youngblood is available now on PC, PlayStation 4, Xbox One and Switch.

A digital copy of the game was provided to the writer by the publisher.