Zombies have been a staple of pop culture for quite a while now, but it has been a few years since a decent zombie shooter graced gaming consoles and PCs. With no Left 4 Dead 3 in sight, and Modern Warfare skipping the popular zombie mode, Zombie Army 4: Dead War will have free reign to capitalise on our obsession with the undead when it launches next month.

You’re forgiven for not having heard of the Zombie Army series. Developer Rebellion first released Zombie Army as downloadable content for its flagship franchise Sniper Elite, before bundling the three games into one package back in 2015. The latest entry Zombie Army 4: Dead War is a full-length title, not DLC, but retains the core third-person gameplay of the Sniper Elite series while adding co-op for up to four players.

Previously on Zombie Army, it’s the final days of an alternate history WWII. The resistance has defeated Zombie Hitler and cast him into Hell – but the dead rise once again with a greater hunger than before. Players take on the roles of Sniper Elite protagonist Karl Fairburne or one of three other characters as they fight through zombie-infested Europe, getting to the source of the latest outbreak. It’s heavily suggested that Zombie Hitler will return at some point.

During the preview session, I scored the opportunity to play two levels of the campaign and survive a round of Horde mode. The campaign is set across nine levels, each taking place in Europe. Milan, Venice and a Croatian zoo have been revealed as playable locations and the two levels I played were called Meat Locker and Molten Nightmare. Yes, the latter features an active volcano. Zombie Army 4 gives off heavy ’80s horror vibes with its art and tone which can only be viewed as a good thing. No decade did horror better than the ’80s!

Gameplay will feel quite familiar to those who have played the classic zombie shooter Left 4 Dead, albeit a few noticeable differences. At any one time, players are equipped with a rifle, machine gun and pistol. The rifle has a sniper scope and is the most effective against zombies, although it’s difficult to aim at close range and takes a while to reload. I found it best to switch between weapons instead of reloading. Like L4D, Safehouses act as checkpoints and give you room to restock ammo and medkits, customise a loadout and equip items.

There are grenades, mines and Molotov cocktails waiting at safehouses. Just one of these items can be equipped at any one time, and when playing with others, you do have to share the limited supply. Power-ups add things like lightning and explosives to your ammo, with just a few rounds to be used when the time is right.

The zombie types are quite varied. They appear as everything from cannon fodder and exploding kamikaze types, to heavy gunners, snipers, chainsaw-wielding zombies and a zombie tank – a literal army tank, with flesh inside and a ribcage. It spewed zombies out the rear doors and fired at me from mounted guns. Apart from the tank, all other enemies were human-ish. The Rebellion Senior Systems Designer on hand confirmed there are no zombie animals in ZA4. If you want to shoot zombie dogs, you will need to play Resident Evil.

The Sniper Elite franchise is known for its famous x-ray kill cam. If you’re unfamiliar, this excellent mechanic adds an occasional slow-motion kill-cam to an accurate shot with the bullet penetrating the enemy in gory x-rayed detail. You better believe the x-ray kill cam made its way to Zombie Army 4. Points are awarded depending on which organs you hit. In case you were wondering, yes, apparently you can achieve genital shots on the zombies, although I was unable to achieve this in the preview session.

I played through the two levels of Zombie Army 4 with three other players. There’s not much interaction between players outside of healing and reviving downed teammates, a few emotes and witnessing each other’s best kills through the x-ray kill-cam. I did not have the opportunity to experience single-player, but I doubt it could be near as fun as playing co-op. Also, the single-player has no AI teammates. You will be going it alone.

At launch, Horde mode will offer four levels. It’s the familiar mode where players fend of increasingly difficult waves of enemies. Each game, players start with a pistol and between rounds, use points earned to access better weapons. The map we played resembled Venice, as it was brimming with water. So I’m assuming it was set in Venice.

A mammoth undead shark was hanging from a hook. Once activated by a player, the shark consumed everything in its path. We saw several traps like this throughout the game, including a fan that sucked in nearby zombies, tearing them to shreds. It’s all very satisfying to witness, and I can confirm the shark appears in several levels.

From the two-to-three hours I spent with the game, Zombie Army 4 feels rough around the edges, so hopefully, Rebellion refines the game before release. Even if it ships as-is, Zombie Army 4 is guaranteed to be a great way to spend a few hours with fellow gamers looking for some gore-soaked fun.

There is a progression system, but it’s not as deep as games like Destiny or The Division, which is actually nice. Sometimes you just want a game that you can pick up, jump in with friends and have a good time without worrying about continually equipping the best armour or weapons, and Zombie Army 4 is shaping up to be just that. 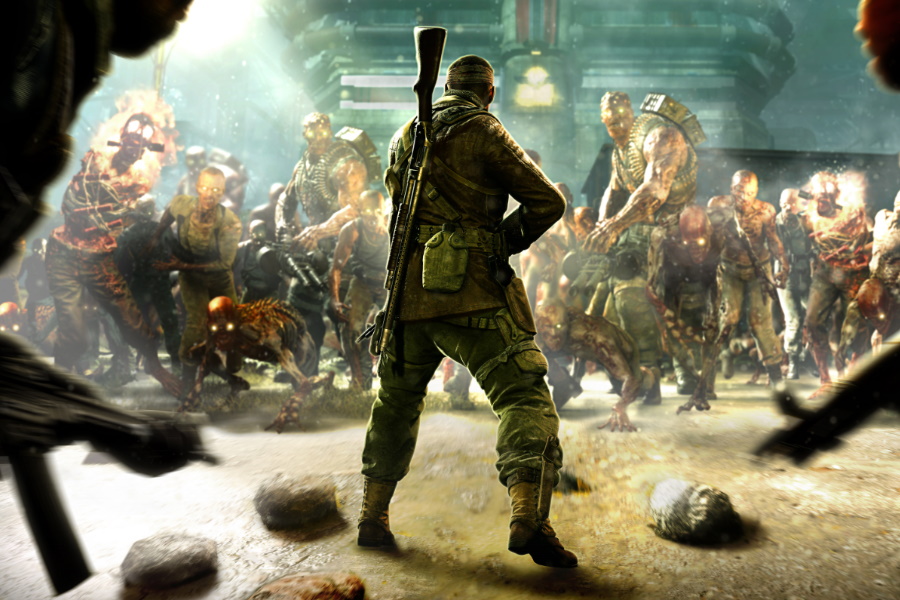