As the euphoria of Rose’s departure starts to dissipate, the contestants head to another suburban dirthole. Walking along the street, they come to a park with benches and cooking equipment in it. “Oh my god what is going on?” cries Reece, as if this is not exactly what everyone was expecting.

Today is a mystery box challenge. There is just one box, filled with…nothing?

Suddenly, the park is surrounded by dowdy suburban people carrying food. Their produce is what the contestants will be cooking with. It would’ve been perfectly easy to simply put them in the box, but time must be soaked up. All the ingredients are produced by the dowdy suburban people themselves, so the contestants’ challenge is to make something out of these incredibly unhygienic ingredients without poisoning anyone.

At Coles, the contestants eagerly promote their sponsor at length. Simon surprisingly purchases prawns, meaning he will not be making a vegetarian dish: this time he might actually make something almost worth eating.

Back in the park, Reynold admits that though his mother has a beautiful garden, she grows nothing as good as this produce. Reynold is ashamed of his mother and vows to never speak to her again.

“This is like the Holy Grail of mystery boxes,” says Andy, observing that this mystery box at one time contained the blood of Christ. The judges seem incredibly excited about the fact that the contestants are cooking with dodgy rubbish from unregulated amateurs.

Poh is making an upside-down miso caramel and chilli apple cake, having seen that her problem in previous cooks has been not stringing enough words together in a meaningless row. But today, she is sure, she will make something truly dreadful. Unfortunately, there is no elimination today, but she hopes to at least plant the seed of her ineptitude in the judges’ minds.

Hayden is making an apple butter cake, which is barely even a steak. “I’m not a baker,” he says, by way of explanation as to why he is baking. He does, however, correctly observe that a cake should be placed in the oven, so he’s got more baking expertise than you might have thought.

Melissa does the rounds of the contestants’ benches, supposedly to find out what they’re cooking, but actually fishing for compliments about her enormous hat. She finds them sadly lacking.

Tracy has a flashback to her private life, while admitting that she found the competition overwhelming at first because the other cooks were so talented and had so much experience, whereas she had never been on television anymore and simply snuck illegally onto the set on the first day. In a bizarre twist, Tracy is actually getting some screen time, explaining that she is making a duck neck sausage despite not having enough time and not knowing what she’s doing.

Meanwhile, a garbage truck rumbles by in the background. “That’s so suburban,” the contestants snigger, feeling incredibly superior to the filthy proles with their “garbage collection”.

No time for inner-city condescension now, though, as Brendan has embarked on an insane quest: making his own soy sauce. Melissa gapes in astonishment at his audacity, waits to see if he’ll mention the hat, and moves on. Brendan has never made his own soy sauce, but he figures if you’re going to humiliate yourself, you may as well do it in front of as vast an audience as possible.

Melissa snidely accuses Amina of “going mega-luxe with the lobster tails”. Amina has forgotten where she came from and gotten ideas above her station. Melissa finds her pretension revolting. Amina reacts with a slow-motion flashback in which she claims to make food that is “rustic but also homely”, even though those are basically the same thing. Today, however, she’s hoping to make something that doesn’t look like it was tossed together by a sleep-deprived pill-popper.

Laura is cooking a whole butterflied quail, which is what her nonna used to cook every Sunday, almost single-handedly driving the quail to the brink of extinction. Emelia is also cooking quail, as she and Laura go head to head in a no-holds-barred battle of the women who always cook the same thing but today aren’t. “I’m going to use the quail to tie everything together,” says Emelia, showing how inexperienced she is with poultry, and a quail is a bird rather than a type of string.

Reynold is doing a savoury dessert, which is not only a shameless attempt to have his cake and eat it too – while not actually making a cake – but is also not a thing. If we can make savoury desserts, where do you even draw the line? This way lies anarchy. The judges, bewitched by Reynold’s animal magnetism, refuse to show some backbone and kick him out right away for such a foul betrayal of basic culinary principles.

Meanwhile, Tracy is making her duck neck sausage which takes a lot of technique and, you know, whatever.

Hayden’s cake is in the oven, giving him the chance to engage in some wacky banter with Reece, the show’s comic relief. He predicts that he will be stoked if he can bake a cake as good as Poh’s but he’s in luck: Poh is fucking up again. She’s running out of time again and will be waiting for her cake to bake up until the very last second. If you didn’t know better you’d assume that Poh is colluding with the producers to generate artifical tension every time she cooks, but this is reality TV so you know that can’t be happening.

Amina is worried about her plating. She wants to show finesse. She wants to make sure the judges are happy. She has more to say, but every sentence she says is cut off by the editor before she finishes, so we never know what she actually thinks. It’s possible she said, “I want to show finesse, but my main priority is mind control” or “I want to make sure the judges are happy when I end their suffering forever”. We’ll never know.

The judges get together to tell each other obvious things of which they are already aware. They also mock Poh and Brendan for their outre foolishness. Tension rises as the male judges steadfastly refuse to say anything about Melissa’s hat.

Emelia claims to be cooking her legs and breast in brown butter, but it’s nowhere near as sexy as that sounds. She is worried about Laura: “I’m not thinking about Laura being my friend today,” she says, to widespread sympathy.

A quick shot of Khanh reminds us that Khanh is not doing anything worth watching today.

Brendan is worried that his soy sauce might not taste like soy sauce, having correctly identified one of the major elements of making soy sauce. He begins to get nervous as Jock stares intensely at him, trying to make his head explode.

Poh is incredibly stressed. “I’m really trying to steer away from these dramatic cooks,” she lies, as she looks mournfully at her inadequate cake in the oven. Her fear is that she won’t be able to turn her cake over, but when you consider the problems of many people in the world today, this really just shows her privilege.

Meanwhile, Tracy is happy with her sausage, in case you’re interested.

The judges count down. The challenge is over. The residents of the street happily look forward to the show soon leaving.

It’s tasting time, and the judges throw themselves with gusto into the task of stretching the process out far, far longer than could be deemed necessary by any reasonable person. It can be summarised as follows:

Hayden baked a nice cake. Tracy made a nice sausage. Reynold made a parsnip parfait with shiitake ice-cream that is weird and offensive and nobody likes it. Asian Sarah made a nice eggplant. Simon made OK prawns. Ginger Sarah made something or other that is fine. Jess hugs literally everyone. Amina made a lobster tortelloni which is broadly acceptable to all. Brendan made spring onion noodles that look horrible but nobody vomits after eating them. Jess keeps hugging everyone. Laura made a nice quail. Emelia made a nice quail too. Poh made a sort-of-nice cake because the jeopardy is ALWAYS false. Everybody else was boring and cut out of the show.

The judges discuss which of the contestants they’d like fuck, marry or kill, and at the end of their deliberations announce that the three cooks going into the immunity cook-off are Amina, Emelia and – in a stunning twist nobody could have foreseen unless they were paying attention to the amount of time given to each cook – Tracy!

Tune in tomorrow, when Tracy is arrested for fraud.

Support independent recapping via Ben’s Patreon. Listen to the Washing Up podcast for more Masterchef insights. 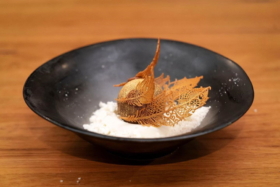 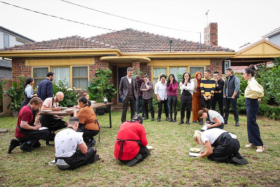 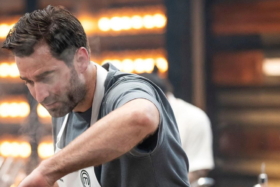