Conor McGregor doesn’t mind making a headline or two. Over the past few years, The Notorious has lived up to his moniker, in more ways than one, however, an instance he’d probably like to forget involves an old man, an Irish pub and some good old-fashioned fisticuffs. And the story is getting stranger by the day.

Back in April 2019, McGregor came under fire for assualting a local punter Des Keogh in the Marble Arch pub. The altercation allegedly spurred after Keogh twice refused to take a drink from McGregor’s own Proper No.12 whiskey. The rejection obviously hit a sore point with the UFC champion who quickly flew into a rage, sucker punching the 50-year-old from behind, before being hastily dragged away from the bar. The shocking incident left a black mark on McGregor’s name, with the the resulting court case at Dublin District Court seeing the 32-year-old admitting defeat and apologising, before being fined £860 (€1000).

While Keogh may have forgiven his attacker for the incident, the event at the Marble Arch obviously still weighs heavy on McGregor’s mind. So much so, the fighter has reportedly purchased the pub for the hefty sum of £2 million. His first act as new publican? Barring Keogh from ever entering.

Ye and your mans barred https://t.co/aVM5mcIA3F

Reported by the Currency earlier this week, McGregor purchased the Marble Arch in Drimnagh, Dublin, a fact that was confirmed by the UFC star on Twitter days later. Quoting an article on his purchase, McGregor simply stated in reference to said fight, “Ye, and your mans barred”. While the tweet can obviously be taken in jest, it does seem like something The Notorious would do.

McGregor’s purchase of the Marble Arch came after the successful reinvigoration of the Black Forge pub near his hometown of Crumlin. The venue, which was purchased for £1.7million in 2019 was transformed into a multi-faceted gastro pub for the estimated sum of £868,000. His plans for the Marble Arch remain under wraps, but the interest is high. With a second pub under his belt, McGregor could well be on his way to building out another empire. Just make sure you accept the drinks when they’re offered.

Old man comes to the door of Conor's pub and asks if he take a free shot of Proper 12 can he have a pint? pic.twitter.com/WqNbLrCS2Y 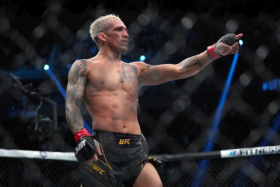