The road to becoming an NBA champion is gruellingly long and Giannis Antetokounmpo would’ve built up one hell of an appetite on his pursuit for the Larry O’Brien trophy. To celebrate this accomplishment, what could be better than a big bucket of Chick-fil-A fried chicken? Well, according to the “Greek Freak”, nothing.

Following one of the all-time performances in NBA Finals history – scoring a staggering 50 points against the Suns in Game 6 – Giannis Antetokounmpo went on Instagram Live as he took his championship trophies through the chicken restaurants drive-thru. With 150,000 fans tuning in, Giannis was in fine form, ordering a 50-piece chicken minis:

When you bag 50 points to win your first NBA championship, the only way to refuel is with 50 chicken nuggets, right? Clearly in a comical mood following the victory, he kept the jokes flowing, claiming he only signed with the Bucks so he could have free Chick-fil-A for life.

We strongly doubt this will be the last epic piece of content Giannis puts out, so stay tuned for more ‘Greek Freak’ gold. 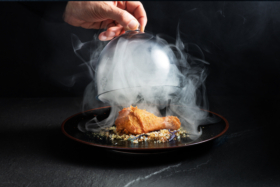