One balmy evening in Clearwater, Florida, residents were caught unawares by a sight no one expected to see. Local janitor Brian Edward Kahrs was seen sailing down the street in what was little more than a mop bucket with a leaf blower and an umbrella. “Nothing like taking a cruise along Clearwater Beach after a long night of mopping floors and scrubbing toilets,” writes Kahrs on his Facebook page. Kahrs was later quoted as saying that “his offbeat subcompact is a fuel-efficient, economical and fun way to travel.”

You’ll also like:
Guy Works Out Like Chris Hemsworth for 30 Days and the Results are Insane
Former NASA Engineer’s ‘Mission Impossible’ Squirrel Maze
Watch the Moment the World’s Richest Man Went to Space 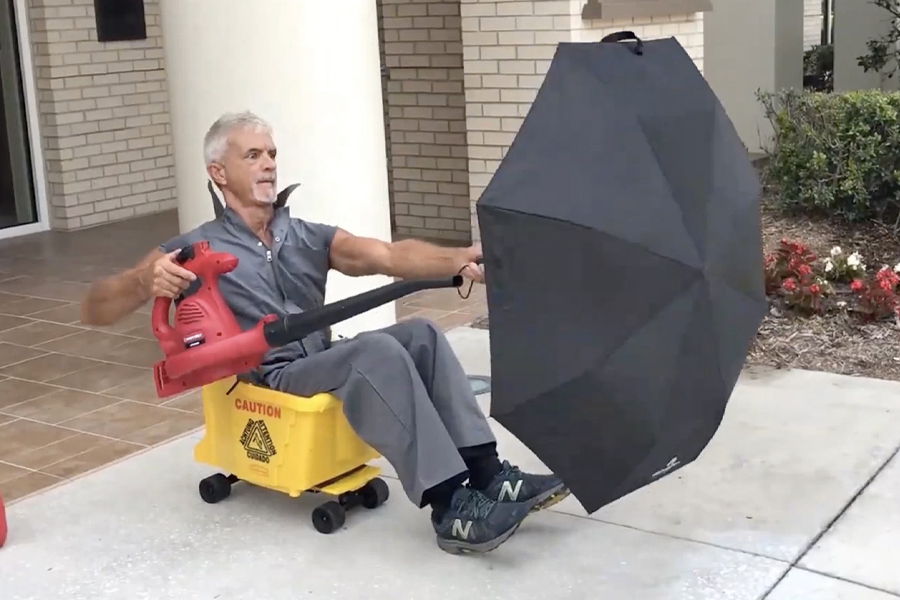 It didn’t take long for the video to go viral, accumulating some 15,000 retweets and 35,000 likes in a period of four days. It also didn’t take long for a discussion about whether this video was fake or not to pop up. As one user noted, “I’m pretty sure this defies physics?”

Sharp-eyed Brandon Paddock, who evidently understands a bit about physics as well, noted, “Sailboats capture energy from the wind. This thing would be pushing air in one direction and catching it (less efficiently) in the other. It doesn’t make any sense. It’s just an electric skateboard underneath, the blower isn’t even on (it’s a wired model).” So once again, science is dashing dreams.

But science and physics aside, developing a new form of transportation was never really the point. In response to Paddock’s comment, another user stated, “Good eyes detecting the wired model. I didn’t notice, but of course it can’t work the way it’s supposed to. Can’t blame people cooped the pandemic for doing things like this for amusement. I’m sure they had fun putting it together.” Whether it’s a fake or not, it’s a fun watch, and certainly, the citizens of Clearwater enjoyed the sight, and we could all use a bit more amusement right now.

You’ll also like:
Guy Works Out Like Chris Hemsworth for 30 Days and the Results are Insane
IWC Reveals Tom Brady’s Inspiring True Story in ‘Born of a Dream’
Former FBI Agent Breaks Down First-Date Body Language