Revolutionising footwear is at the heart of ASICS as a business. Since their founder, Kihachiro Onitsuka first made a name for the brand by redesigning the basketball shoe in 1949, ASICS has kicked, dunked, and scored every goal in sports on its quest to help athletes achieve elite performance.

With collaborations from some of the biggest names in sneakers, including Central Saint Martins very own Kiko Kostadinov who is responsible for driving the Quantum range to the forefront of every sneakerheads radar, the brand has gained traction with sought-after models such as the GEL-QUANTUM 360 6 and GEL-QUANTUM 180 6. Technology, style and comfort combine here, as the ‘Metallics Pack‘ makes its way to the lineup in limited numbers. 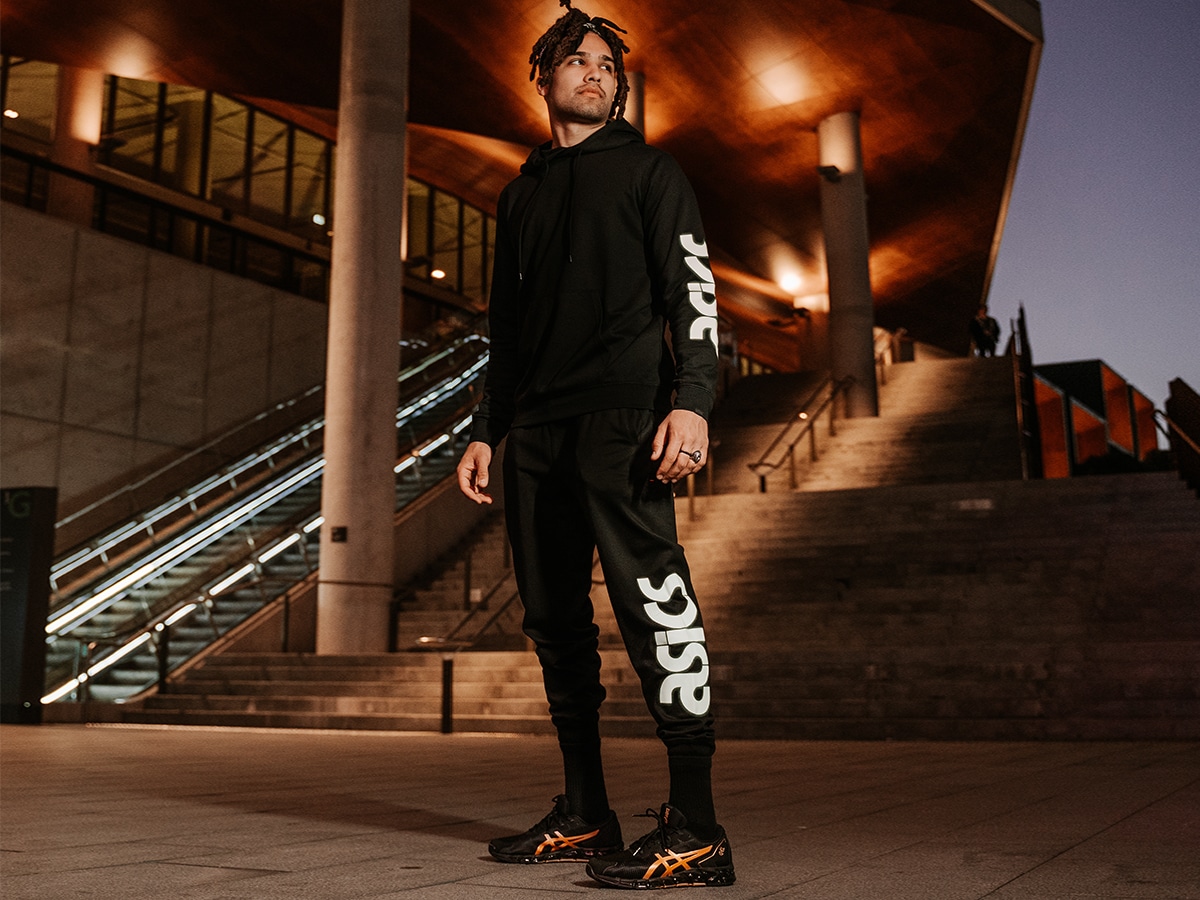 In 2021 ASICS launched the Metallic Pack as a bold, stylish new take on their popular GEL-QUANTUM 360 6 and GEL-QUANTUM 180 6 range. Produced in limited numbers the shoe is inherently versatile and suits everyday wear. When combining the contrasting hits of gold with deep black uppers, we settle on two silhouettes that are equal parts sophisticated and bold. 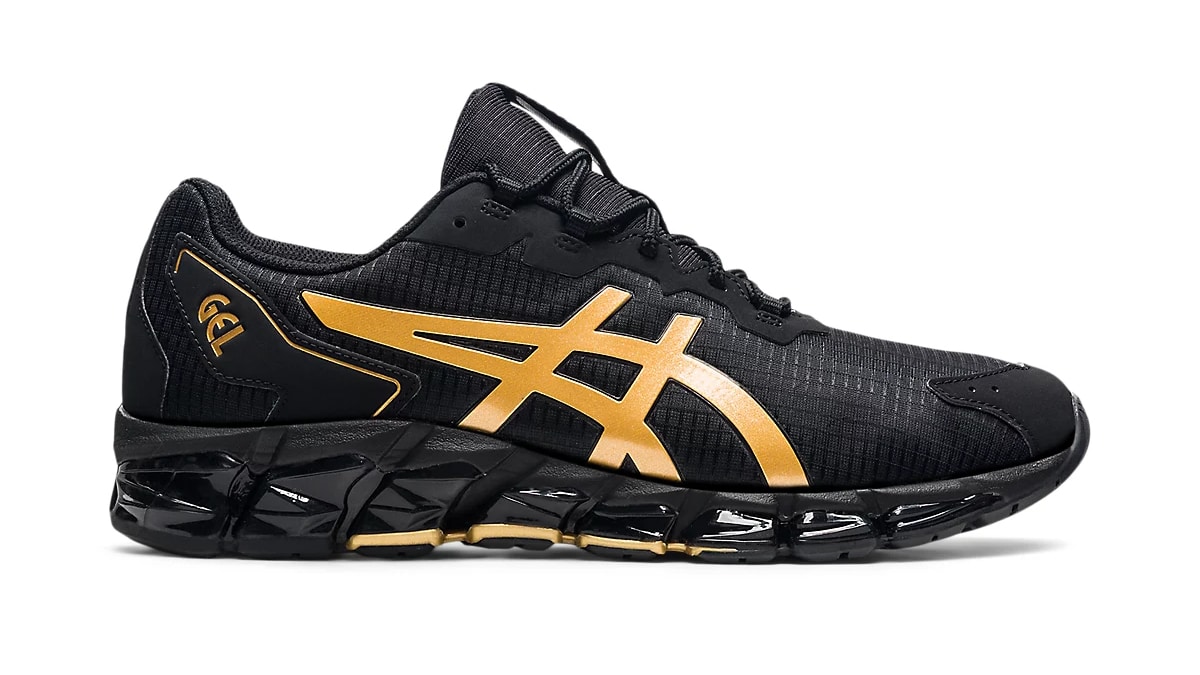 If absolute comfort is your aim, the GEL-QUANTUM 360 6 treats comfort as a priority. This style features an engineered mesh pattern on the upper with a no-sew overlay for zero interference. The eye is immediately drawn to the signature 360-degree GEL based cushioning system that wraps its way around the entire sole of the shoe for a full-length cushioning experience underfoot.

Maintaining a balance at the junction between technical components and modern street style, the GEL-QUANTUM 360 6 features a bold exterior. Highlighted by the eye-catching bright metallic gold embossed ASICS stripe logo, the small touches of gold on the outsole and ‘GEL’ logo on the heel adds a stylish flair to the exterior finish. If we had it our way, we’d pair these up with a matching pair of the SPS Pants as pictured below for maximum street style. 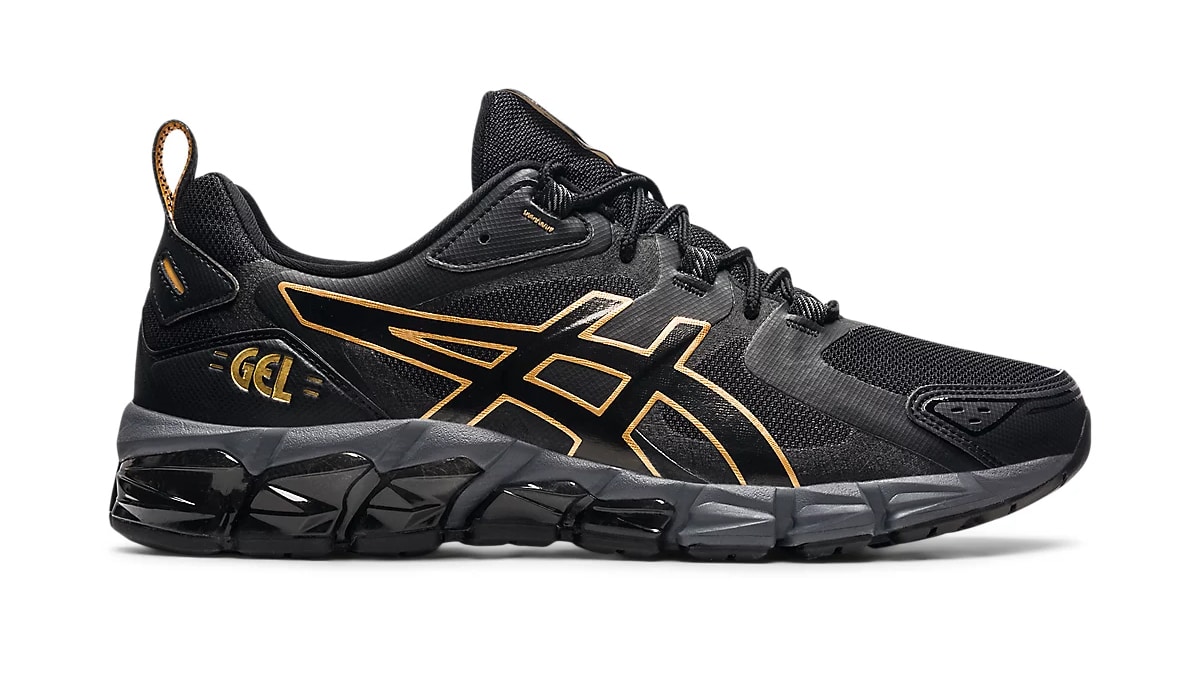 The GEL-QUANTUM 180 6 features layers of visual material depth that adds a new dimension to the no-sew upper. ASICS classic stripe logo is seen here with a slightly more understated gold outline, as opposed to the solid option on the GEL-QUANTUM 360 6.

With a number of comfort features that demonstrate that classic ASICS Sportstyle comfort meets style combination, the GEL-QUANTUM 180 6 is a winner every day. Almost acting as a derivative of the athlete’s footwear range we find a synthetic engineered mesh upper with synthetic suede overlays along with a range of metallic accents. The slightly lighter grey coloured Solyte midsole provides rollover support and breaks up the contrasting black upper. Technical nuances continue to the AHAR rubber outsole, and finally the dyed recycled sock lining. Pair these with the ASICS Sportstyle washer pants for the beginnings of a sweet streetwear fit. 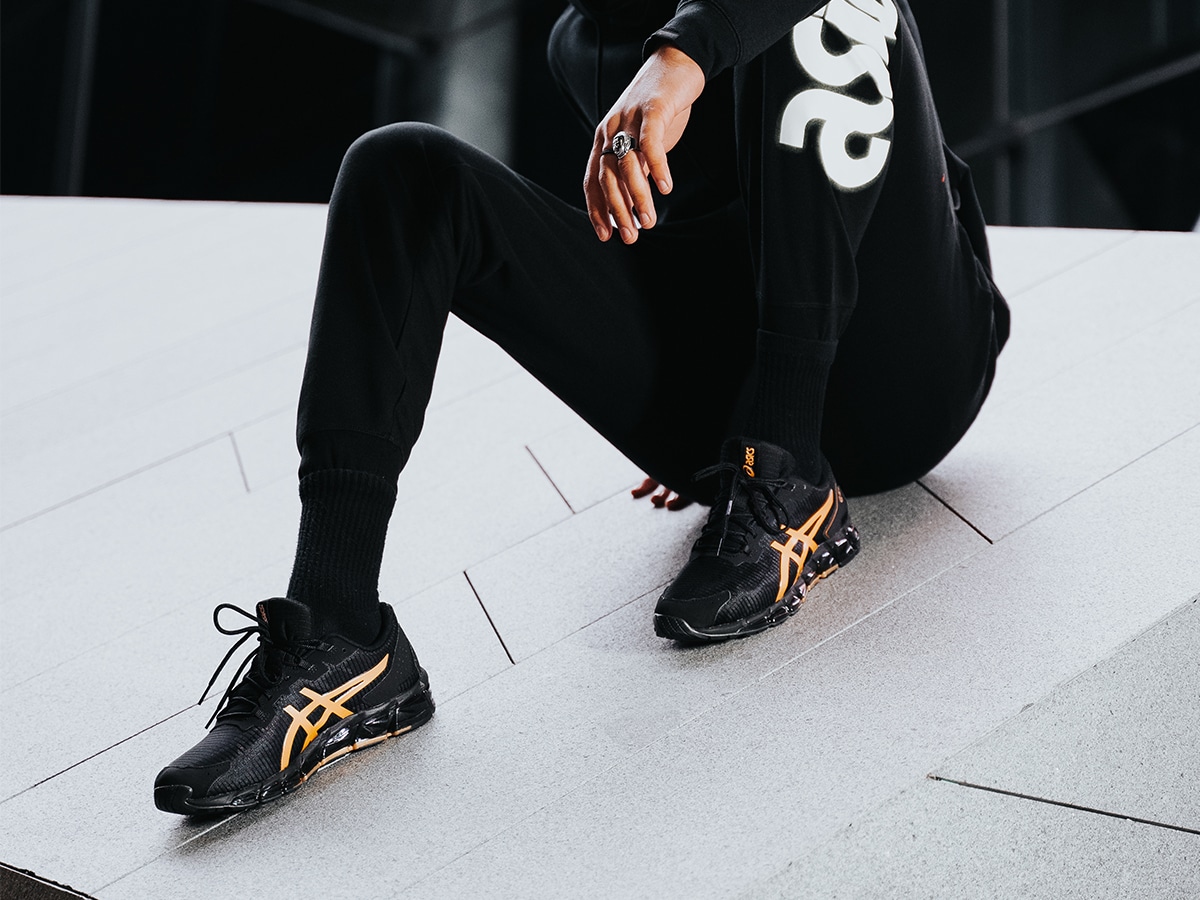 Stylish all-rounders in anyone’s book, these sneakers stand out while remaining true to SportStyle’s goal of achieving technology in design. The flagship of the ASICS Sportstyle collection, QUANTUM runners represent a continuation of ASICS’s commitment to streetwear style and sporting prowess; the perfect choice for the competitor in all of us. You can pick up a pair of the QUANTUM 360 6 and GEL-QUANTUM 180 6 ‘Metallic Pack’ for yourself via the link below.