We’re oh so close to Christmas, but that doesn’t mean we haven’t taken our collective eye off the ball. We’ve kept a sharp eye on who is wearing what in the fairy-tale world of celebrities, and we’ve got some crackers for you this month!

From Ryan Reynolds wearing an absolute beast of a Chopard to the Rock wearing a super subtle IWC and Jay-Z just casually wearing one of the world’s most complicated and most expensive watches, we’ve got it all.

Read on and enjoy Celebrity Watches of the Month! 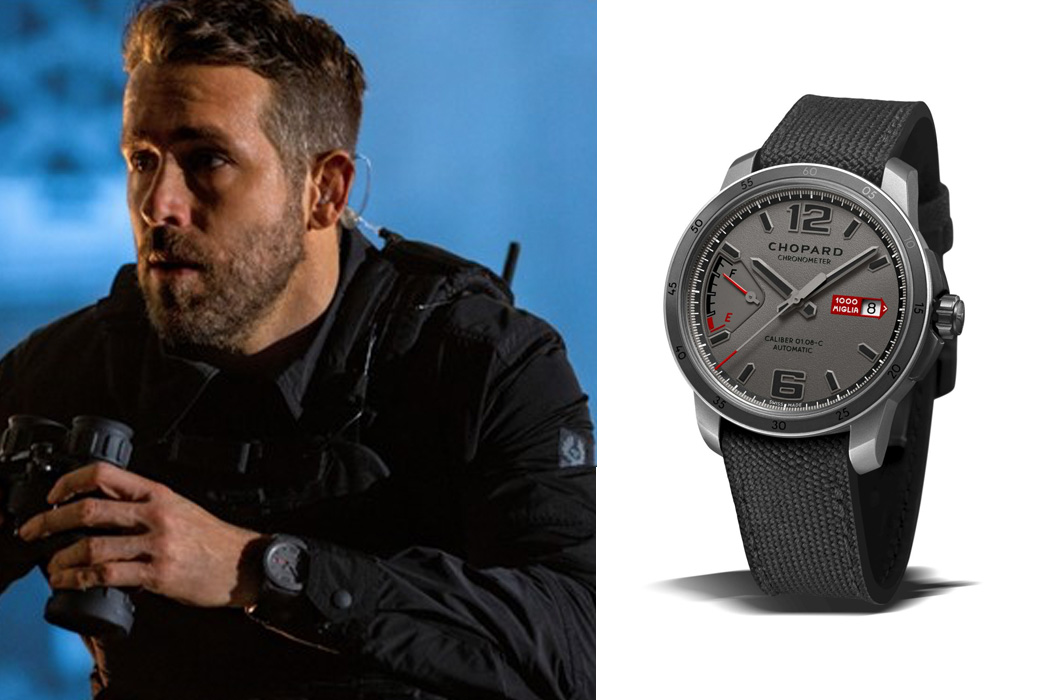 Ryan Reynolds Saving the World with a Chopard On His Wrist 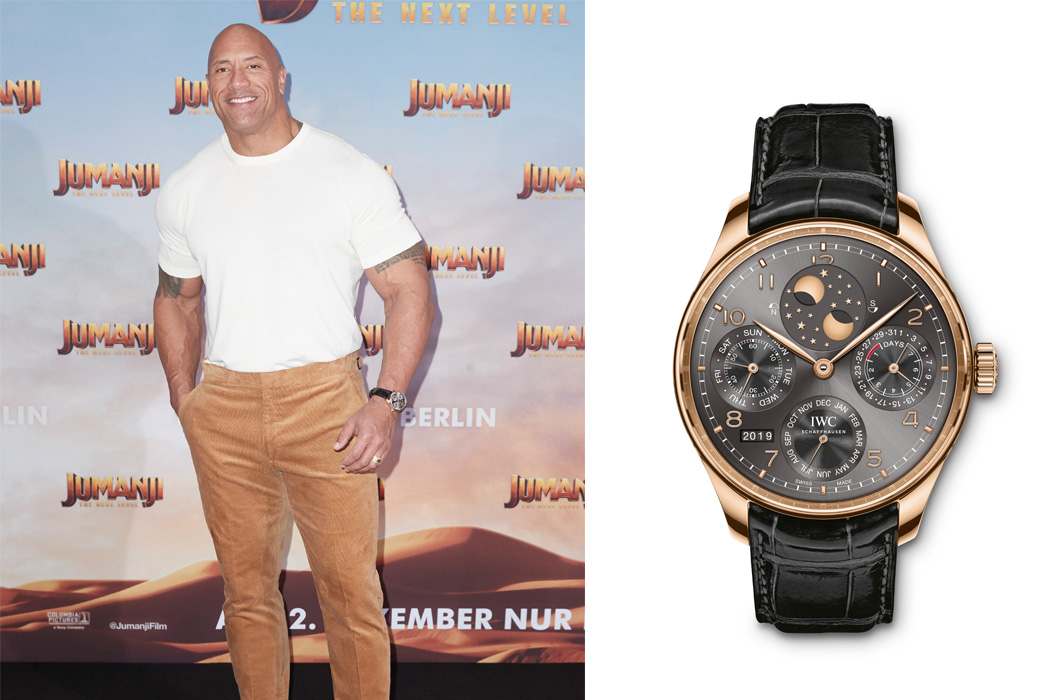 The Rock and His IWC

The Rock was spotted wearing something a little low-key at a press junket for “Jumanji: The Next Level” in Berlin, Germany. The IWC Portugieser Perpetual Calendar is not exactly a small watch, and with a case diameter of 44.20mm, this solid gold watch is in itself quite large and prominent. But, anything strapped to The Rock’s immense wrist is more likely than not going to look infinitely smaller than its measurements, and the IW503404 is no different. But still, so cool to see such a mega movie star of the most epic physical proportions wearing what is arguably one of the greatest perpetual calendars, ever. 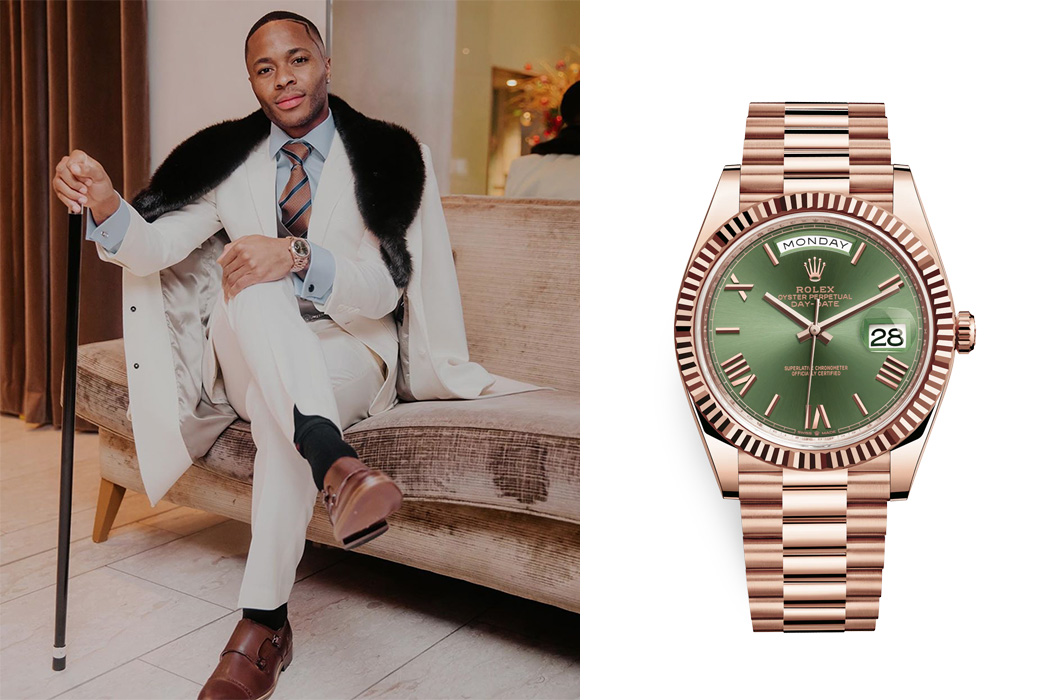 First thing’s first, I’m still sour about Raheem Sterling. As a life-long Liverpool fan, his departure from the club saw him turn from prodigy to villain in all but 2 seconds. But, I can’t help applaud his sense of style, his choice of watches and of course his footballing abilities. Here he is, depicted in all his glory, wearing the immense Rolex Day-Date 40. At a smidge under $50,000AUD, the Day-Date in Everose gold and with that deep olive-green dial is high up on many a collector’s and enthusiast’s wish list, and as much as I hate to say it, looks awesome on Sterling’s wrist. 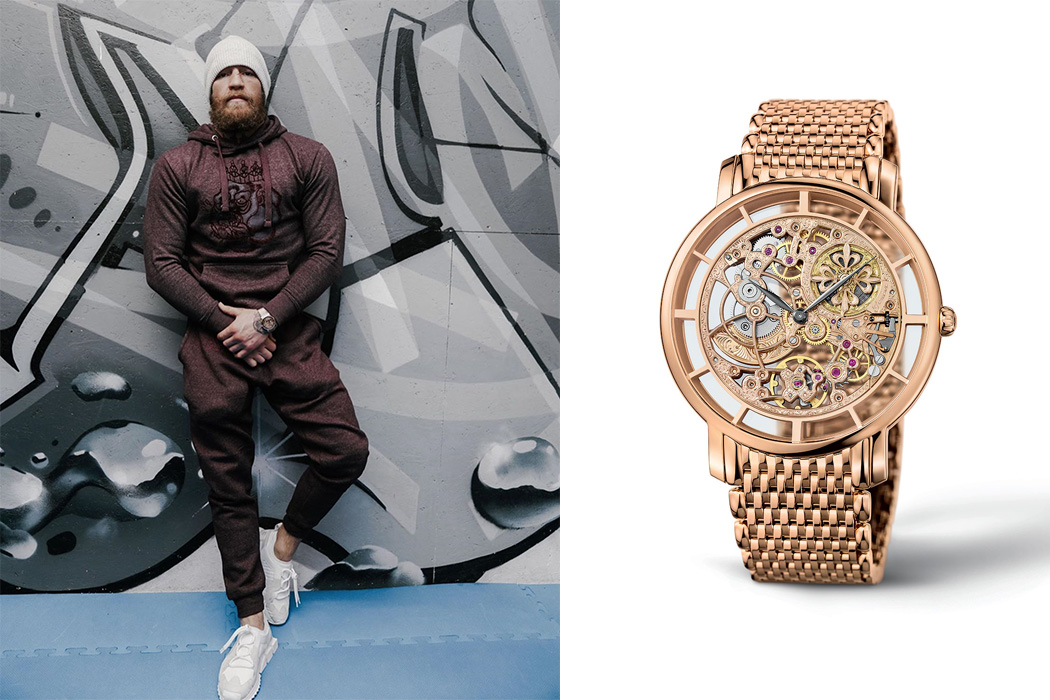 A style icon, Conor McGregor has developed an eye for the extravagant ever since he exploded on the UFC scene. Seen here with the beautiful Patek Philippe 5180/1R Calatrava Skeleton, McGregor has effortlessly married the worlds of casual with luxury. I doubt many of us could pull this off, but in the case of McGregor, it absolutely works. Word of warning: do not try this at home. 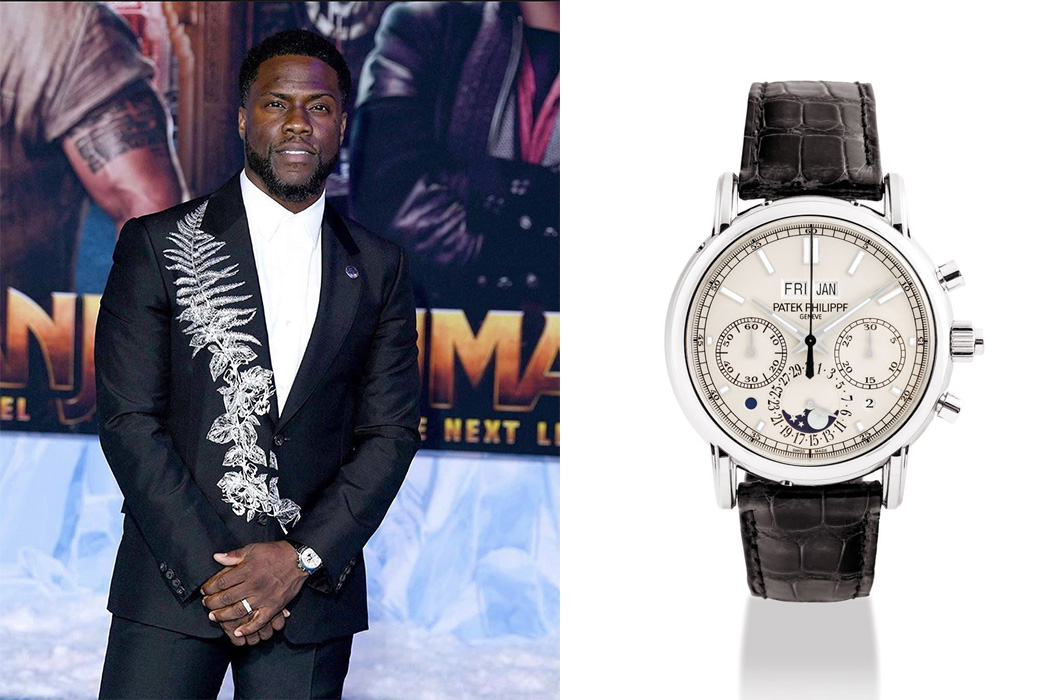 Seen at the “Jumanji: The Next Level” premiere, Kevin Hart literally took it to the next level with one of his most prized possessions, the Patek Philippe 5204 Perpetual Calendar Split Seconds Chronograph. From his humble beginnings in Soul Plane to his outright and relentless takeover of Hollywood, Kevin Hart has also been busy acquiring some of the world’s most beautiful, most complicated and most expensive watches. I like to think of the 5204 as an uber watch, and I think Kevin Hart has does done it justice paired with such an ornate outfit. 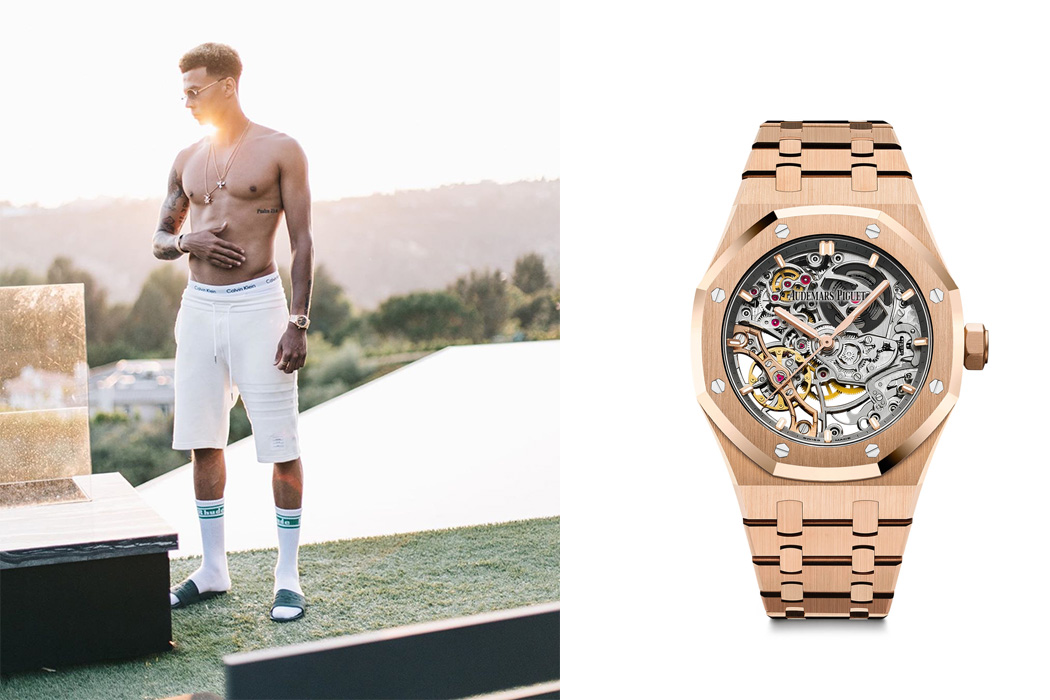 Dele Alli is a rising star in the world of football. One of the kings of Tottenham, the 23 year old midfielder is set to light the footballing world on fire. On his wrist is a solid gold Audemars Piguet. But this is no ordinary Royal Oak. This is the incredible Royal Oak Double Balance Wheel Openworked in solid rose gold. This watch is the epitome of time-telling. A perfect combination of aesthetics and mechanical prowess, similar to that of Dele Alli’s game. His technical ability within the game to seemingly turn the impossible into the simplest of tricks, flicks and passes is personified in the almighty Royal Oak Double Balance Wheel Openworked. One of my favourite players of the game wearing one of my favourite watches of all time. 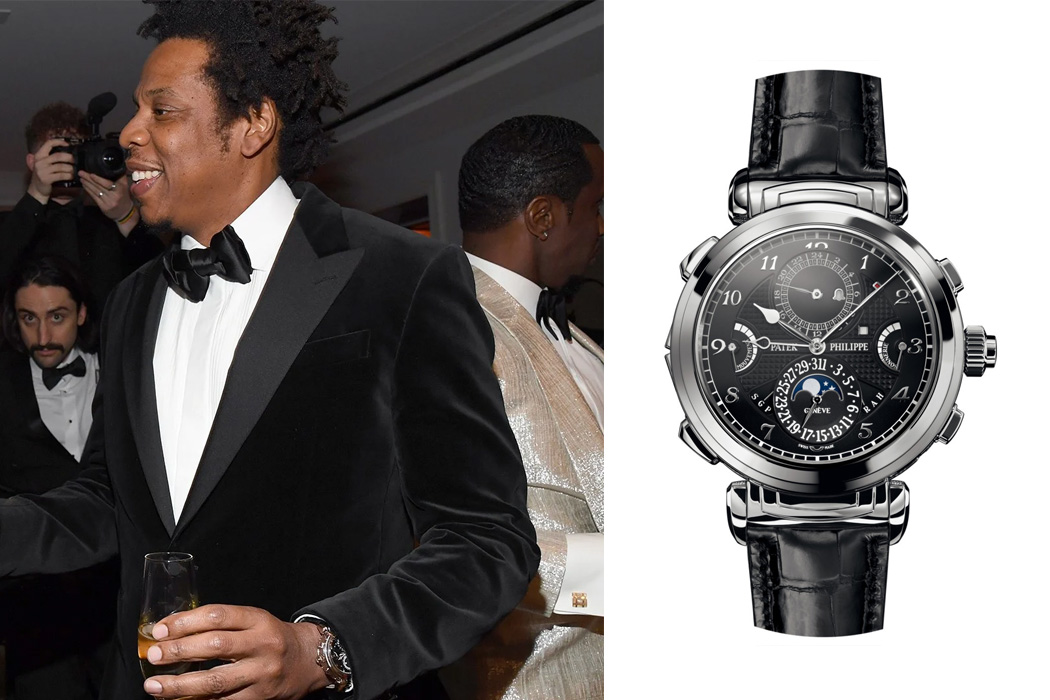 Whilst in attendance of P. Diddy’s 50th birthday party (WTF – 50 already?!), Jay-Z was spotted wearing one of the world’s most complicated and most expensive watches, the infamous $3.2 million AUD Patek Philippe 6300G Grandmaster Chime. This uber-watch contains a whopping 20 complications of which 5 are chiming modes (with two of these chiming modes being patented world firsts). Measuring 47.70mm across and 16.07mm in depth, I doubt Jay-Z had anonymity in mind, nor did he want his left wrist to remain inconspicuous through the night. This is the ultimate flex from a man whose wrist game we know is very strong.

What kind of watch does Ryan Reynolds wear?

Featured on Ryan Reynold's wrist in the Netflix blockbuster, 6 Underground, the Mille Miglia GTS Power Control Grigio Speziale is the quintessential fly-under-the-radar watch that any agent of violence and secrecy would need.

What kind of watch does the rock wear?

The Rock was spotted wearing something a little low-key at a press junket for “Jumanji: The Next Level” in Berlin, Germany. The IWC Portugieser Perpetual Calendar is not exactly a small watch, and with a case diameter of 44.20mm, this solid gold watch is in itself quite large and prominent. 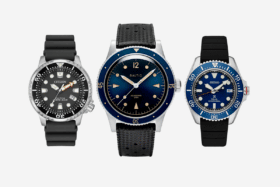