Italian history is filled with the amazing conquests of Julius Caesar and the empire that he created filled with amazing architecture, art, and innovation. On the other end of the spectrum, you have the Swiss who are world renowned for their dedication to the craft of watchmaking. To some, a Swiss made watch is a piece of history in itself dating back hundreds of years. The technical beauty and complication is its own work of art.  When you marry the Italian and Swiss histories together they overlap with a very unique brand, Officine Panerai.

Officine Panerai has humble beginnings in Florence Italy with a small watchmaker’s shop that was opened in 1860 by Giovanni Panerai. The initial workshop actually served a dual purpose as a shop and the city’s first watching making school. The workshop eventually moved to where it is currently located to this day in the Palazzo Arcivescovile and changed its name to Orolegeria Svizzera at the beginning of the 20th century. 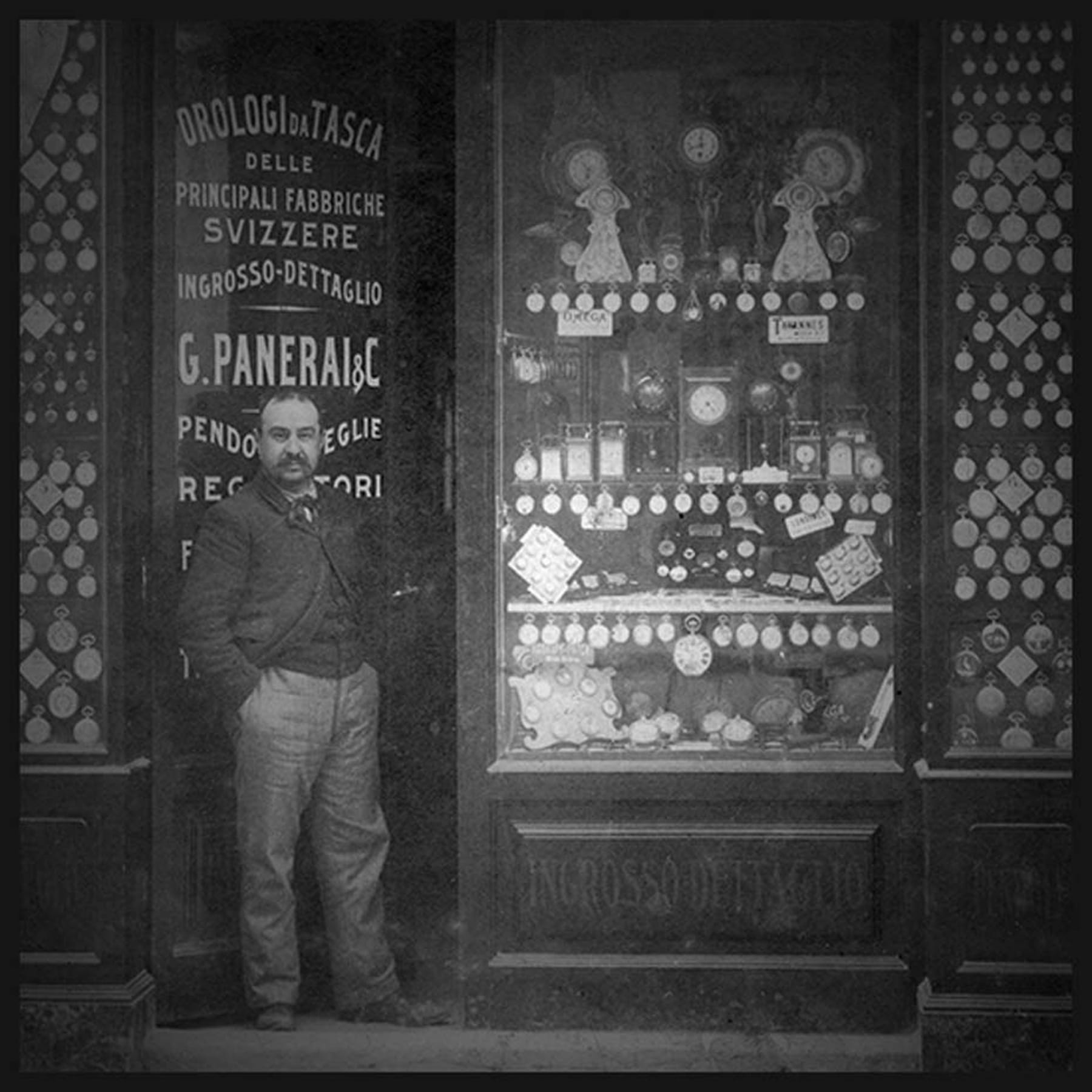 In 1864 Guido Panerai (Giovanni’s Grandson) & Figlio was created and specialized in high-quality equipment for the royal navy including depth gauges, flashlights, compasses and more. This mechanical engineering firm would be the company that along with the Orolegeria Svizzera workshop would become the Officine Panerai we know today. In continuing the development of instruments for the Italian Royal Navy, Guido Panerai filed for a patent in 1916 that would lead to a very important feature that makes a Panerai stand out even today.

They meet the military needs, Guido Panerai, was issued a patent for the method in which to create Radiomir, a radium-based powder that gives luminosity to the dials of the instruments and devices. The paste that was created by using the very toxic and radioactive element radium. In that era, they probably didn’t realize that this element is one of the most radioactive known to man. They did know for sure that the Radiomir gave the instruments the much needed underwater visibility the Italian navy needed in a way we now call “lume”. To this day instruments and watches that were created with this Radiomir material are unsafe to wear thanks to the radioactive properties of the element. 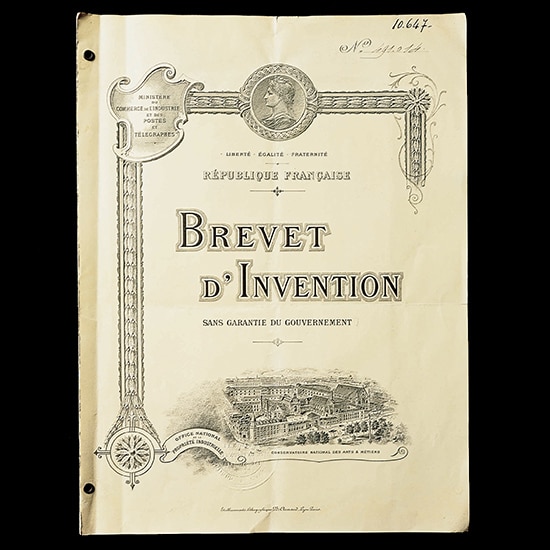 A majority of the instruments designed for the Italian Royal Navy utilized this Radiomir substance because the wearers of the gauges were essentially known as human torpedoes or Siluro a Lenta Corsa in Italian. Let’s take a minute to step back and realize what their roles were because it’s pretty crazy actually. These torpedoes had two crewmen in diving suits that rode it and steered it at a slow speed into an enemy ship leaving behind a mine and then guiding it away. Because all the missions were done underwater, visibility was of the utmost importance. Since most of these missions were to be carried out in the dark of the night, being able to see the depth, direction, and time were critical. You will notice on some newer models there is a small Siluro, a Lenta Corsa or SLC for short on the dial.

It wasn’t until 1936 that Officine Panerai created their first watch prototypes that we have come to know as the “Radiomir” case. This particular prototype was created for the frogman commandos of the First Submarine Group. This Radiomir was a 47mm with a hand-wound mechanical movement and water resistant strap that could be worn over a diving suit. Historical archives state that there were only 10 of these produced in 1936. These initial pieces are known as the reference 2533. 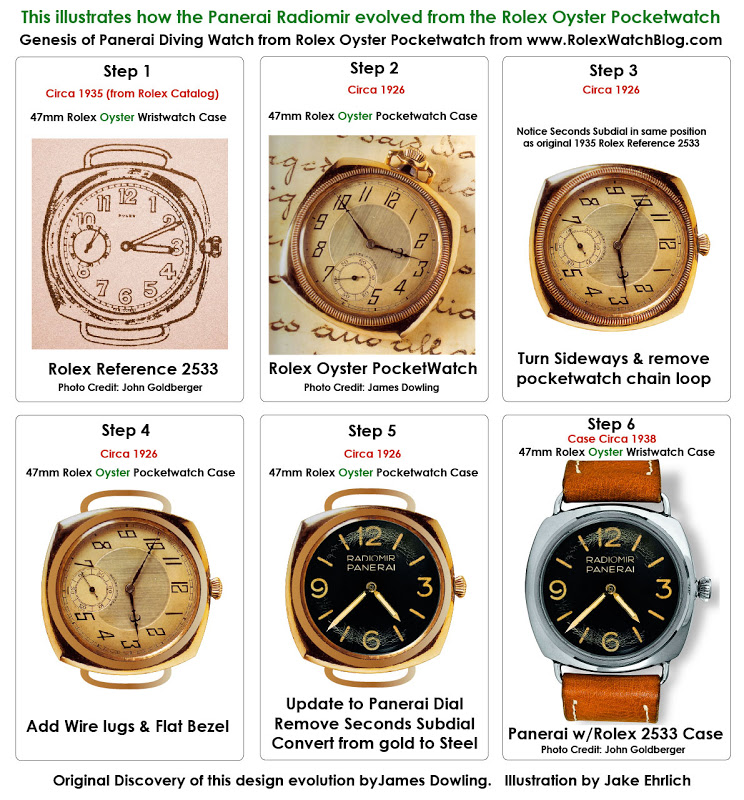 To bring the prototype to production would take another 2 years of development and had a few minor changes along the way. The new models featured what we have come to know as the sandwich dial which incorporates to separate plates to make the dial. The bottom plate has the numbers and batons painted on it while the top plate only has cutouts for those indices and is positioned above it. The wire lugs were also modified a bit in these later case designs. These models were given the 3646 reference numbers. 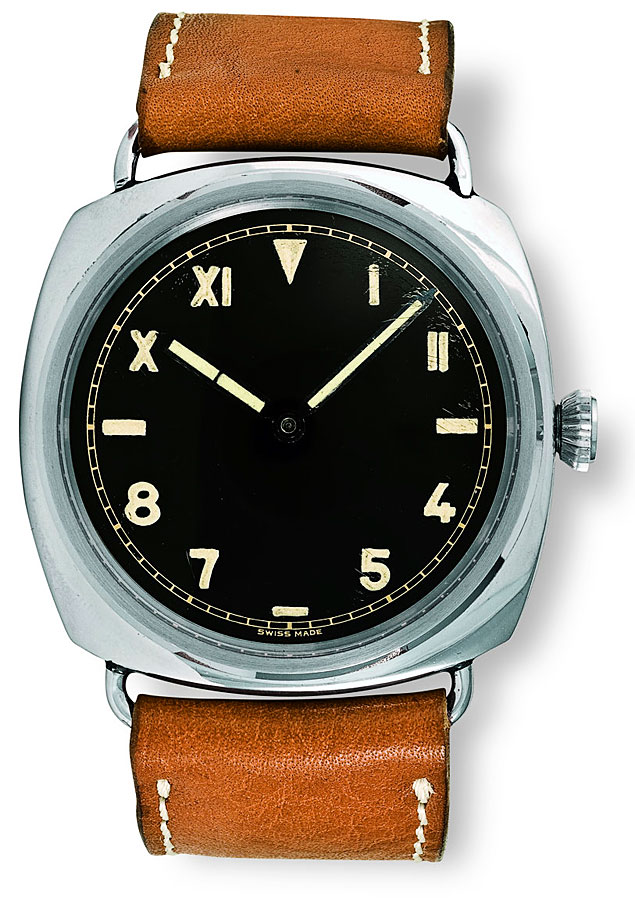 Although the watches were being designed and executed by Officine Panerai their movements were being provided by Rolex. 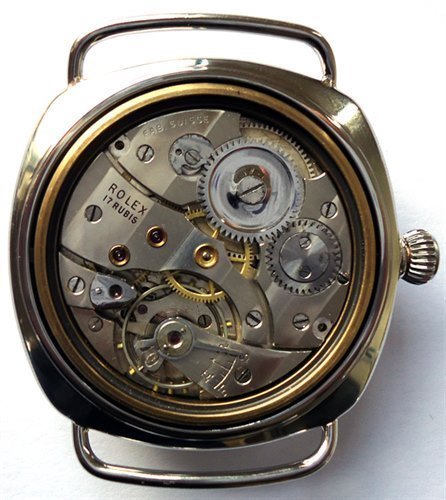 By the 1940’s the requirements of the Italian Royal Navy became even more detailed. They needed the watches to be able to stay underwater in extreme conditions for very long periods of time as well as resist extreme tension. To meet these demands Officine Panerai adjusted the lugs from the wire versions you saw in the previous prototypes. With these new models, the lugs were created out of the same block of steel for better underwater resistance and strength. This particular case style was used as an inspiration for the “Radiomir 1940’s” collection that was introduced in 2012. In 1949 the Radiomir paste is replaced with a with a new substance that will be known as Luminor. The new self-luminous substance is a Tritium based compound that was protected under a trademark patent that was filed in that year. This new substances name is the inspiration of their next line of historic watches, the Luminor. (Subsequently, in the early 2000’s the use of Tritium was banned and Panerai changed over to the substance they use now which is known as SuperLuminova) 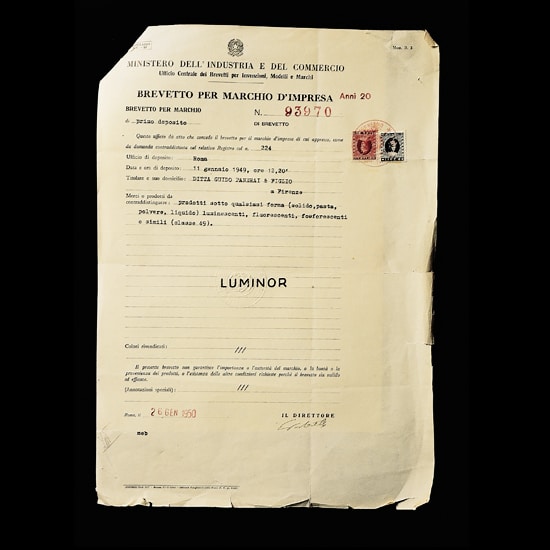 With the start of a new decade, the second world war has drawn to a close, the Radiomir to Luminor transition has completed and now Officine Panerai uses their research in developing the first-ever Luminor watch. This is the first time that we see the crown guard introduced on the cushion-shaped case that was previously used in the 1940’s Radiomir. This particular prototype was the inspiration of the contemporary pieces that have the “Luminor 1950’s” case. You can see an example of this in the 6152/1 from around 1946. It wasn’t until 1956 while working on the “Egiziano” for the Egyptian Navy that they applied for a patent on the crown-protecting bridge that we saw on the first prototypes. This crown guard would become the iconic look that Panerai watches would carry on into the present day. 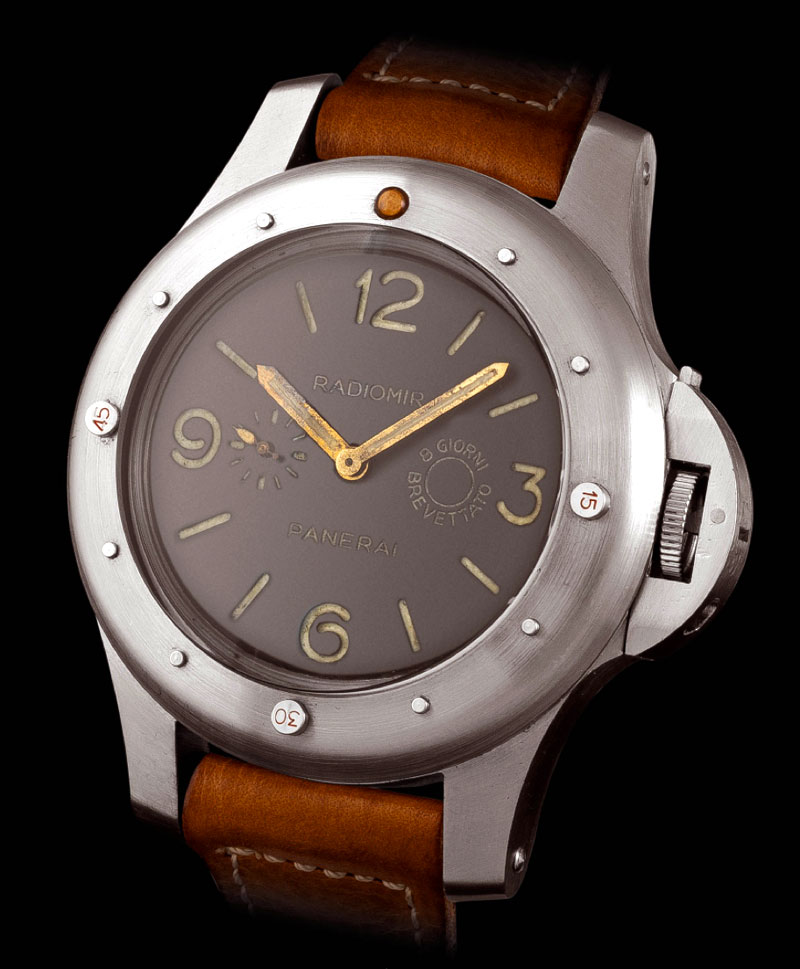 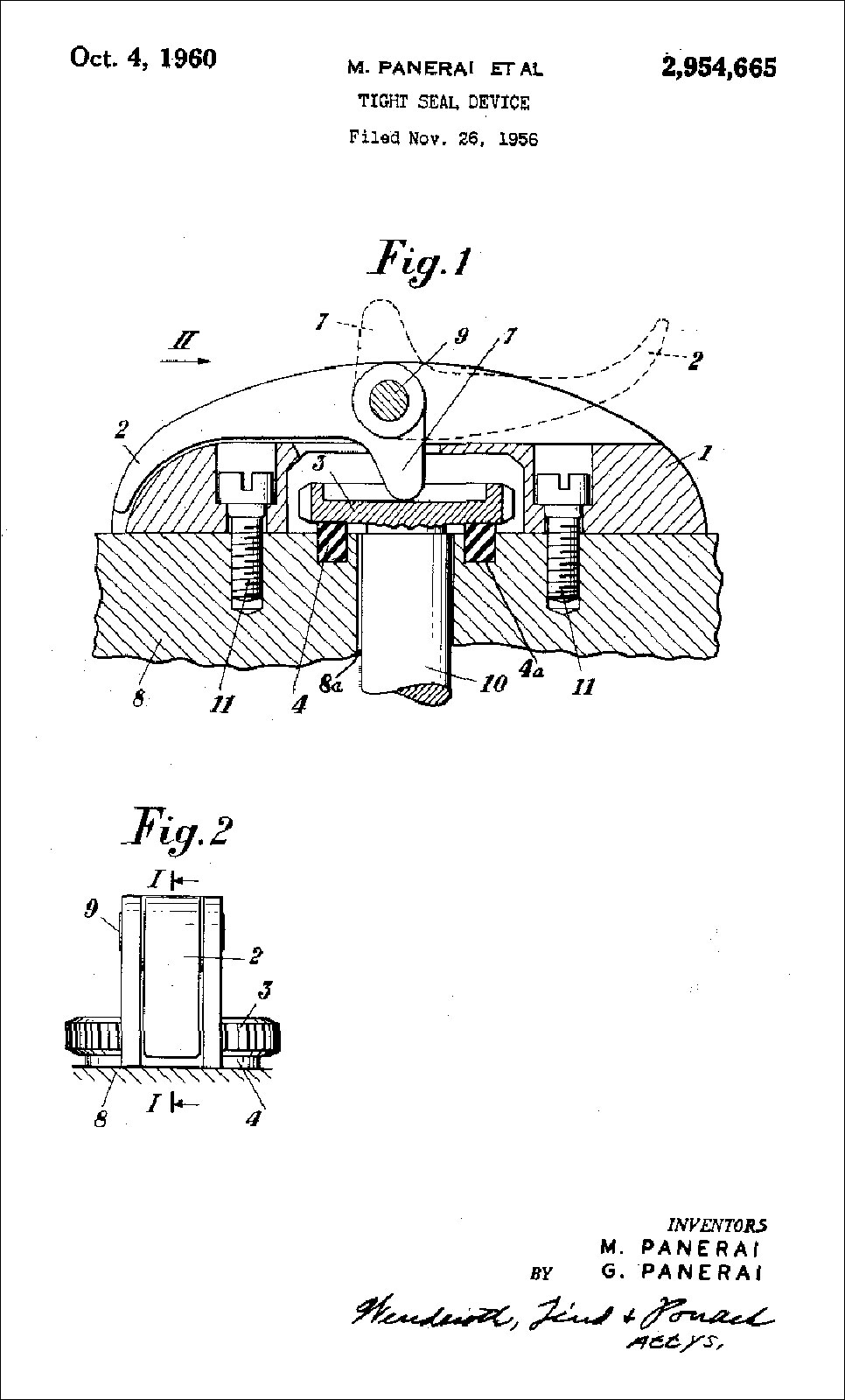 By 1972, Giuseppe Panerai, son of Guido passes away. The management of the family business, as well as the Italian Navy supply contracts, gets passed on to engineer Dino Zei, who changes the name from “G. Panerai & Figlio” to “Officine Panerai S.r.L.”. During this time, they continuously supplied instruments such as the compasses, wrist depth gauges, and flashlights that can be used under extreme water pressure.  The watches that were produced and issued to the Marina Militare (Italian Navy) were no longer issued due to them not being very cost effective or meeting the naval specifications that were needed at the time. 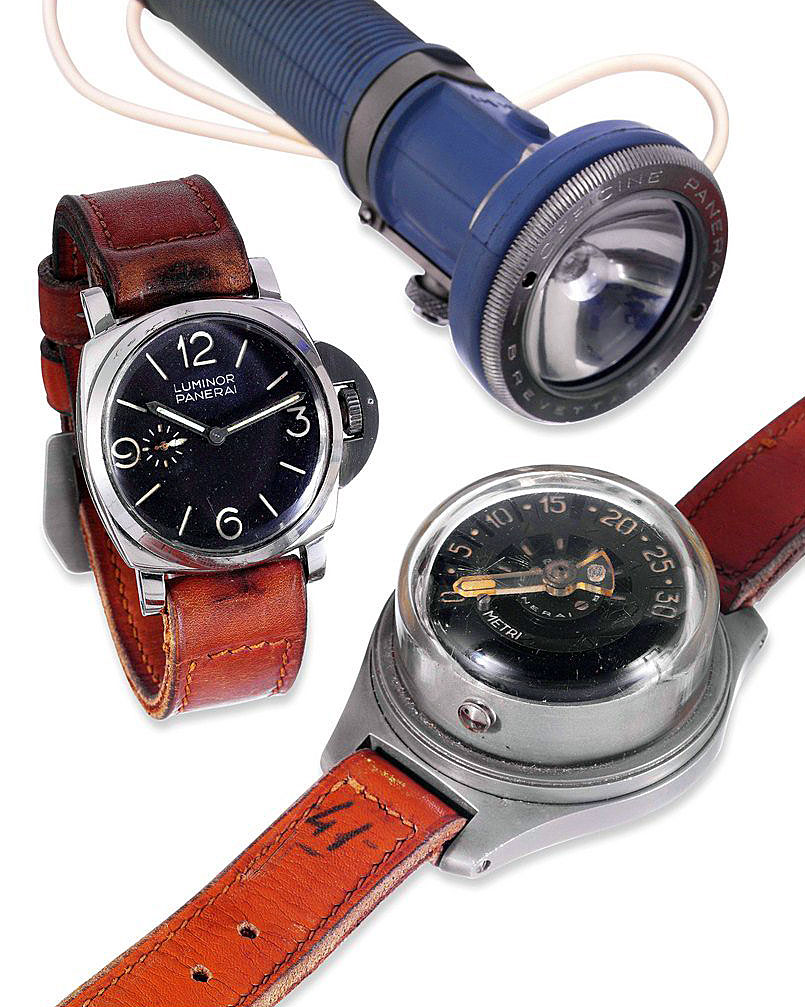 It wasn’t until 1993, that Officine Panerai looked to launch their products into the civilian market. At this time, they introduce 3 limited edition watches to the public, the Luminor, The Luminor Marina, and the Mare Nostrum. The Mare Nostrum which did not look like your typical Panerai watch drew its inspiration from the historic models that were created for the Second World War Commandos. This piece became one of the most sought-after pieces by collectors in the modern era.  The Luminor was basically a base dial with no complication while the Luminor Marina featured a small second subdial in place of the 9 on the dial. 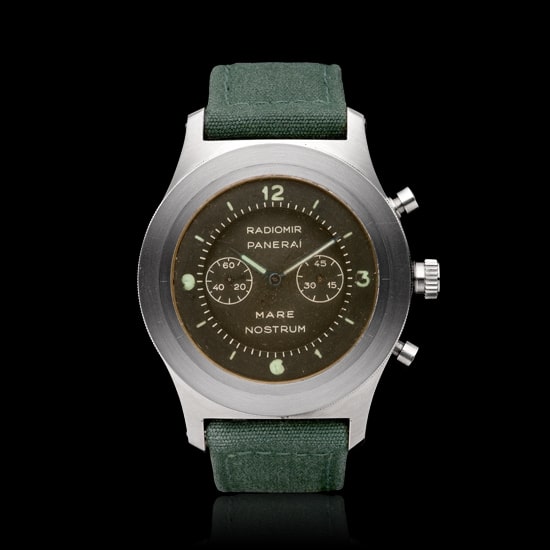 It was in 1995, that actor Sylvester Stallone was roaming the streets of Italy looking for a watch to wear on his upcoming film Daylight. He was intrigued by the Panerai Luminor in Rome and purchased it. Because of his overall love of the watch, he collaborated with Officine Panerai to create a small batch of watches with his signature on the case back. These watches would come to be known as the Slytech and a majority of them were gifted by Sylvester to his friends and family. The exposure that Sly brought to the Officine Panerai brand sparked the resurgence of the brand into the mainstream with the help of some of his Hollywood friends such as Arnold Swarzeneggar who is a longtime fan of the brand. This rising popularity amongst consumers and media caught the attention of The Richemont Group (At that time it was known as Vendome Group). In 1997, The Richemont Group acquired Officine Panerai and quickly established a distribution network in Italy. When speaking to collectors of the brand there are a few notable time periods in the Panerai brand. Pre-V, or Pre Vendome from 1994-1997 and Vendome which is from 1997 and on. Of course before all of this you have the Vintage Panerai which you normally see come up in Auction and private collections. Over the years many different model Panerai watches have been released to the public. Currently, the Officine Panerai line consists of the Luminor, Radiomir, Radimor 1940’s, Luminor 1950’s, and Submersible Case as part of their production line. These watches fall into 4 categories; Historic, Contemporary, Manifattura, and Special Editions.  Even though the complications, movements and case materials have changed, their case design has stayed very true to their historic roots. It’s this unmistakable look that can identify a Panerai watch from any distance. Each piece still holds on to the DNA from their vintage watches.

In 2001 the brand returned to its roots by doing a complete makeover on its historic boutique in Florence located at the Piazza San Giovanni. To collectors, this boutique is a must visit because so much of the history of the brands began here. The next year they opened their Manufacture in Neuchatel Switzerland. With this opening, they quickly set forth a path to research and develop the brand in all aspects such as technical and functional. As previously mentioned Panerai up until this point used movements from other brands ranging from Rolex, Angelus, to ETA. With the opening of this new Manufacture, they were able to release their first ever in-house movement in 2005. The P.2002 hand wound calibre featured a GMT function and 8-day power reserve just like the Angelus movement used in the 1940’s. In only a short amount of time, Officine Panerai has researched and developed some very complicated pieces such as the patented tourbillon case in their P.2005 movement and most recently this year with their most complicated watch ever, the PAM600 Carillon Tourbillon Minute Repeater in Red Gold.

Throughout the years we have been able to see an evolution of a brand from humble beginnings grow into a global powerhouse with a cult following that is unmatched in the watch industry in my opinion. Panerai fans, or Paneristi’s as they like to be called, have a bond that has lasted almost as long as the brand has been available to the public. It’s this “brotherhood” that leads to worldwide get together featuring pieces from every era of the brand.  It will be interesting to see the continued progress and design changes that are in the pipeline within the walls of the Manufacture in Switzerland. Here’s to the next 150+ years of Officine Panerai!

Khalil Ghorbani is the founder of Panerai Central, an enthusiasts site and social presence dedicated to all things Officine Panerai. It was started out of the pure passion for the brand in hopes to bring even more Panerai fans within the community together through social platforms.