Winter has well and truly set in and with it, the urge to hibernate has come to fruition for most of us. Luckily, July is a WHOPPER of a month for new content and the theme of this month is, without question, variety. In July, we see the return of the eternally cool Stranger Things – and yes, that means the world’s best babysitter Steve Harrington is back and with that ridiculous hairdo to boot – along with Seinfeld’s lauded Comedians in Cars Getting Coffee web series.

For the foodies, Taco Chronicles is a hard-hitting documentary on the history and future of the not-so-humble taco, and for those who yearn to know what happened during the Cambridge Analytica scandal, the answers may be here. No matter your preference, fact or fiction, Netflix has your deep winter covered. Here is the absolute best of what’s New To Netflix In July 2019.

Looking more like a summer tentpole blockbuster than a TV series, the Stranger Things Season 3 trailer pulls no punches. From what we can gather, the strange ‘Thing’ that put our favourite characters through the wringer last season is not dead like the gang had previously thought – and now, it has a human host. From rabid rats and Soviet espionage to New Coke and a brand-new mall, it’s the summer of 1985 in Hawkins…and big changes are afoot on the 4th of July. Get hyped.

A Korean adaptation of the original Designated Survivor, 60 Days is much of the same. It follows the story of a politician, who suddenly ascends from a low cabinet position to President after an explosion at the National Assembly kills almost everyone federal government. The main character, Park Mu-jin is a scientist-turned-politician who struggles to fit in politics, except now he’s the freakin president and he fits in even less. Albeit inexperienced and unwilling, he’ll try to uncover the truth behind the attack – and maybe find that he’s fit for the job after all.

Check it out on the 1st of July.

Based on real historical events, Netflix’s The Last Czars is set in a time of Russian social upheaval during the early 20th century – namely, the magnetic Rogue Czar Nicholas II is resistant to change and sparks a revolution that will end a dynasty. Bust out the Vodka and don your Ushanka, The Last Czars hits Australian shores on the 3rd of July.

Hosted by the man who brought us such zingers as ‘What’s the deal with airline food?’ and the maker of Bee Movie, Comedians in Cars Getting Coffee was a quick success. Many seasons along, Jerry Seinfeld’s roving talk show that combines coffee, laughs and vintage cars, still makes for one helluva quirky, caffeine-fueled adventure featuring the sharpest minds in comedy. Freshly Brewed hits Netflix Oz on the 19th of July.

The refreshed version of Queer Eye for The Straight Guy, has a new line-up. Presenting an all-new “Fab Five”, Season 4 will no doubt serve up “hip-tips” (Srsly Netflix?), emotionally charged makeovers and big reveals that keep you coming back for more. Queer Eye: Season 4 is out on the 19th.

Following the smash-hit The Haunting of Hill House, Typewriter is too about a haunted house. This time, however, it’s a bit more ‘Poirot’ mixed in with a smidge of ‘Ghostbusters’. Typewriter follows a group of young wannabe Ghost hunters and their dog, who appear to stumble upon a haunted book – this leads them to discover a ghost that’s plaguing a notorious home in their neighbourhood.

Packed full of mystery, thrills, teen angst, and a blossoming romance, you can stream this one on the 19th of July.

Orange Is the New Black: Season 7

Is this thing still going? Orange is the New Black, which is on its way to outlive the SAW franchise, is back for yet another season. According to the press release, the power dynamics at Litchfield will shift dramatically as the inmates react to a tragedy. Whilst this sounds pretty reasonable, we’re quite certain this show jumped the shark (or, in this case, jumped the Shiv). But if you’re a die-hard fan, OITNB is out on the 26th, inmates.

You Me Her: Season 4

In what appears to be a pretty unique concept, Extreme Engagement is a reality show wherein an engaged twosome take their love on the road and test their commitment as they explore eight cultures’ marriage traditions in the span of one year. For those about to get hitched, or who wish to reaffirm how much they enjoy the single life, Extreme Engagement is out on the 12th.

Another Life hones in on astronaut Niko Breckinridge (Katee Sackhoff) who is focused on searching for alien intelligence. As she leads a crew on a mission to explore the genesis of an alien artifact, it becomes apparent that they’re all probably fucked. Facing oodles of danger and staring down the barrel of what very well could be a one-way mission, Niko and her crew will fight for their lives, and to uncover the secrets of the universe.

There isn’t much on the interweb about Cities Of Last Things, but we do know it’s a dystopian tale unfolding in reverse chronology – similar to the harrowing Irreversible. Centred around a man with a complicated past (nice and vague, cheers Netflix), he’ll take revenge on the individuals who wronged him decades ago. Check it out on the 11th.

Kidnapping Stella is as it sounds – snatched off the street and held for ransom, a bound and gagged woman (Stella) is tortured – finger clamping with a pair of plyers included – until she decided enough is enough and fights back. Kidnapping Stella hits Aussie shores on the 12th.

Starring the new prince of Netflix, Anthony Mackie, Point Blank is yet another thriller from the streaming giant to grace our screens in July. From what we can gather, an ER nurse (weird flex) and a career criminal are forced into an unlikely partnership and attempt to take down a ring of corrupt cops threatening the lives of both of their families. As you do. This flick is getting a fair whack of the month’s marketing dollars for the month so we’re assuming it’ll be pretty good. Be sure to catch it on the 12th.

In what could be the most obvious metaphor titles in history, Girls With Balls is about a group of girls who play volleyball, who are also pretty ballsy themselves. Stranded in the woods and eyeballed by a gang of twisted hunters, the team “bump it up” in the most dangerous game of their lives. GWB drops on the 26th of July.

Just in case the winter vibes weren’t making you feel grim enough already, The Son is here to gut you emotionally. The Son follows Lorenzo, a 50-year-old bohemian painter, and his expectant wife, both blissfully happy and looking forward to the arrival of their new family member. Alas, during the pregnancy she becomes obsessed with taking care of the baby, isolating it from the world and its father to what we can only assume is an untimely end. The Son is available to stream on the 26th.

In her second Netflix original stand-up special Katherine Ryan: Glitter Room is a follow-up to her 2017 special In Trouble. From stalking a bloke in Japan and meeting her daughter’s first celebrity crush, Anna Kendrick, Glitter Room is out on the 1st.

Starring in this delightfully original mockumentary piece, David Harbour (Stranger Things & Hellboy) finds lost footage of his actor father’s disastrous TV production of the literary masterpiece Frankenstein and digs deep into his family’s secrets while he’s at it. Check it out on the 16th.

Whitney Cummings: Can I Touch It?

Filmed at the Sidney Harman Hall in her hometown Washington, DC, Cummings’ signature incisive commentary on gender dynamics will cover burnings questions such as: Do women need to wear service vests instead of “Rosé All Day” t-shirts? Are their nicknames for each other hurting the cause? For Whitney’s take on everything including why we should give sex robots a chance, Can I Touch It? debuts globally on Netflix on July 30.

Taco Chronicles is the documentary we’ve been waiting for here in Australia. A heartfelt tribute to the mighty taco, including its history, significance in Mexico, global appeal and varieties: pastor, carnitas, canasta, asada, barbacoa and guisados; we dare you to try and overcome the urge to pick up and leave your house in search of an amazing south-of-the-border snack. Taco Chronicles drops on the 12th.

In what was the biggest breach of data since the Wikileaks scandal, The Great Hack explores how Cambridge Analytica came to symbolize the dark side of social media in the wake of the 2016 presidential election. For a doco with potential for a Making A Murderer effect, resulting in real-world change, The Great Hack is available to stream on the 24th.

SAINT SEIYA: Knights of the Zodiac

As Netflix continues to move into the Anime space, we are seeing better and better attempts at the genre. SAINT SEIYA: Knights of the Zodiac follows Seiya and her posse. Sworn to protect the reincarnation of the goddess Athena, Seiya and the Knights of the Zodiac will aid her in the battle against those who seek to end mankind. Check it out on the 19th.

Whilst we don’t know the plotline for Kengan Ashura: Part 1, we do know a bit about the universe its set in. Hideki. In a world where business moguls wager mega-business deals on the outcome of brutal gladiator matches (awesome and probably true IRL), we meet Underground gladiator Tokita Ohma who fights on behalf of business mogul Nogi. You can stream this one on the 31st. 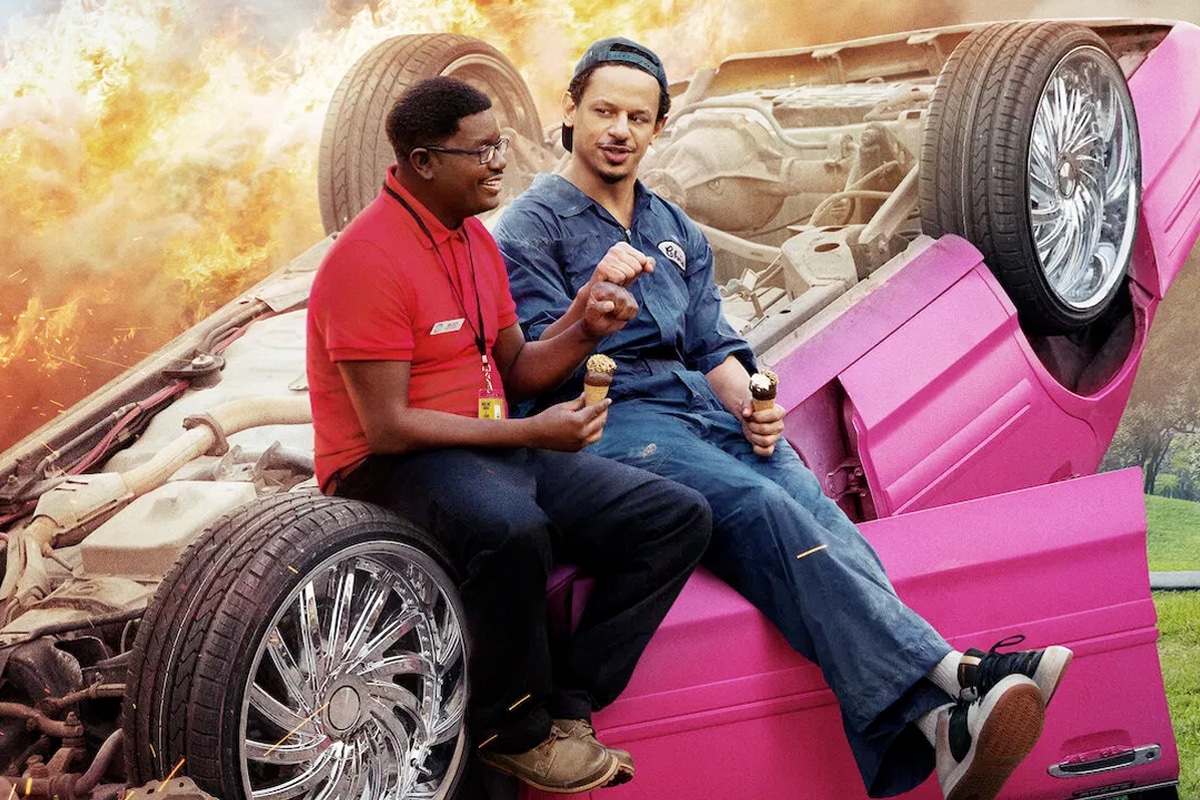