Some pieces just can’t help but make a splash. When Japanese watchmaker Seiko introduced the country’s first dive watch way back in 1965, it started a ripple effect that is still being felt today. With an automatic movement and water resistance up to 150m, the specialised diver’s watch offered a certain level of reliability and quality the industry hadn’t seen before. Indeed, the release of the original Seiko diver’s was a defining moment in Japanese watchmaking history, and more than 55 years on, the legacy endures.

Earlier this year, Seiko announced that three of the most significant pieces from the brand’s first decade as a dive watch maker would be making a comeback. Recreated in celebration of the 55-year anniversary, the updated Prospex line is a faithful reimaging of the iconic collection, complete with all the hallmarks of the Japanese icon’s pioneering release.

Among the updated releases is a 1965 Diver’s Re-Creation, a 1968 Professional Diver’s 300m Re-Creation and a 1975 Professional Diver’s 600m Re-Creation. While the 55th-anniversary Prospex line is an unmistakable nod to Seiko’s trailblazing history, the watchmaker has saved a few tricks for 2020. The biggest and most expansive of which being the introduction of Seiko’s ‘Ever-Brilliant Steel’. Used for the cases of the 1965 and 1968 recreations, along with the bezel for the 1975 recreation, the new grade of stainless steel is more corrosion resistant. For those seafarers looking to take on the elements, it’s a worthy addition. The material is used extensively on the surfaces, linings, bolts and other components of marine structures and vessels to cull corrosion in the chloride-rich seawater environment. In the Prospex’s case, Seiko has added a new level of durability to its already tough timepiece, one that echoes the collection’s rugged history.

When the initial Prospex dive watch was unveiled back in 1965, Seiko wasn’t afraid to throw everything at it, including Antarctic provisions. Worn by members of the Japanese Antarctic Research Expedition from 1966 to 1969, the original Seiko Prospex underwent some of the most brutal conditions on earth, faring better than any timepiece that had come before. Here in 2020, Seiko has captured the spirit and reliability of that inaugural piece and recreated it in detail.

From a design perspective, the 1965 Diver’s Re-Creation stays faithful to the original, however, has been bolstered by the addition of modern technology. This latest variation scores a 10-beat calibre 8L55 constructed by Seiko’s craftsmen and women in-house at the Shizuku-ishi Watch Studio at Morioka in Japan’s north. The case is virtually identical to its predecessor, however, the diameter has been increased by 1.9mm. The 1965 Diver’s Re-Creation also has a box-shaped sapphire crystal and 200m water resistance for greater reliability, upping the original 150m resistance to boost versatility. In a nod to heritage, the new recreation houses the iconic dolphin emblem on its case back, reminiscent of the 1965 original that served Japan’s Antarctic adventurers well. But the story of innovation doesn’t stop there. 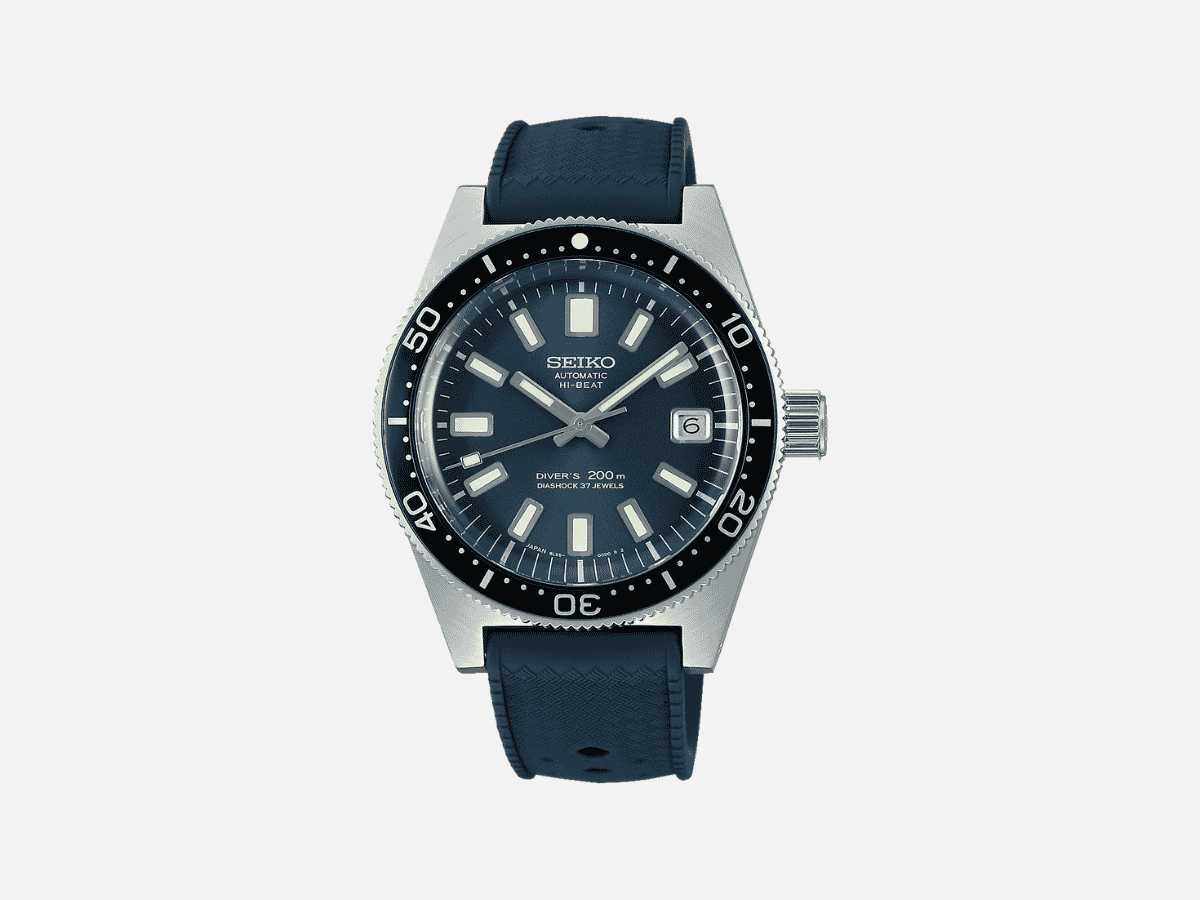 While the inaugural Seiko Prospex had more than passed the initial Antarctic test, the watchmaker wasn’t about to rest on its laurels. In 1968, Seiko’s engineers developed the brand’s first high-beat diver’s watch, a pivotal point in the Japanese icon’s history. Increasing the number of vibrations in the balance, Seiko incorporated a new self-winding driver system with a manual winding mechanism. With 300m water resistance and a 10-beat automatic movement, the 1968 Prospex broke new ground in more ways than one. Worn successfully by the first person from Japan to climb Mt. Everest, this timepiece laid the foundation for Seiko’s 50-year strong pioneering stance on durability and precision in professional diver’s watches.

For the 1968 Professional Diver’s 300m Re-Creation model, Seiko has once again enhanced the specifications of this frontier-leading release. Featuring an automatic movement with manual winding capacity and anti-reflective coating on the inner surface, the latest incarnation is decidedly more versatile. While the original model was constructed as an air diver’s watch, this recreation has been optimised for saturation diving through a redesigned one-piece case structure. Like the original version, this recreation features a flat case with Seiko’s characteristic sharp design. Incorporating the long-held tradition of Zaratsu polishing techniques, this recreation cops added sharpness, with an emphasis on the lugs. Only 1,100 of the 1968 Professional Diver’s Re-creation models have been made, solidifying the piece as a rare glimpse into heritage innovation.

But while the original 1968 Prospex had proved its worth on the peaks of Mt. Everest, beneath the surface, there were still improvements to be made. 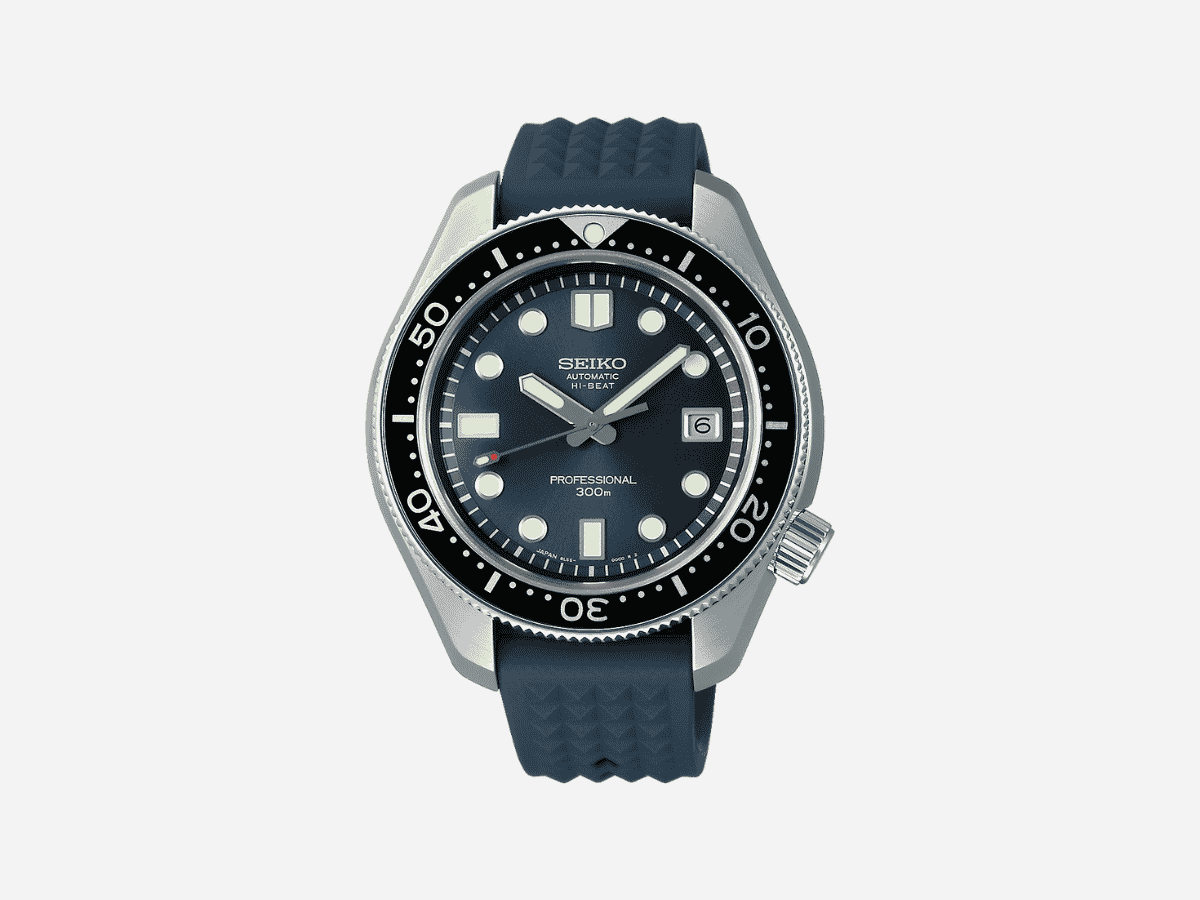 The very same year the Prospex reached the highest point on earth, Seiko received a damning letter from a saturation diver who asserted that no diver’s watch could withstand the extreme atmospheric conditions that he encountered on a daily basis. The claim prompted immediate action from Seiko, who set to work on its most advanced and resilient diver’s watch yet. The development took over seven years,  but at last, in 1975, the Seiko Prospex 600m diver’s watch was born.

Pushing the envelope in a completely new direction, Seiko introduced a titanium one-piece case and an outer case protector. Utilising a specially developed L-shaped gasket to improve helium-resistance without the need for an escape valve, the 1975 Prospex was a world-first innovator. For the 55th anniversary collection, that trailblazing spirit is on display again.

Featuring all the innovations that led to the initial 1975 release’s success, the latest Seiko recreation is a truly awe-inspiring timepiece. The iconic accordion-style strap that made the watch secure despite ambient pressure makes a welcomed appearance, highlighting the heritage vibes with a touch of durability. The automotive driving system ups the vibrations to 28,800 per hour, ensuring time accuracy irrespective of conditions. Truly, Seiko’s most experimental Prospex release has finally got the heritage update we’ve been longing for in the 1975 Professional Diver’s Watch Re-Creation. 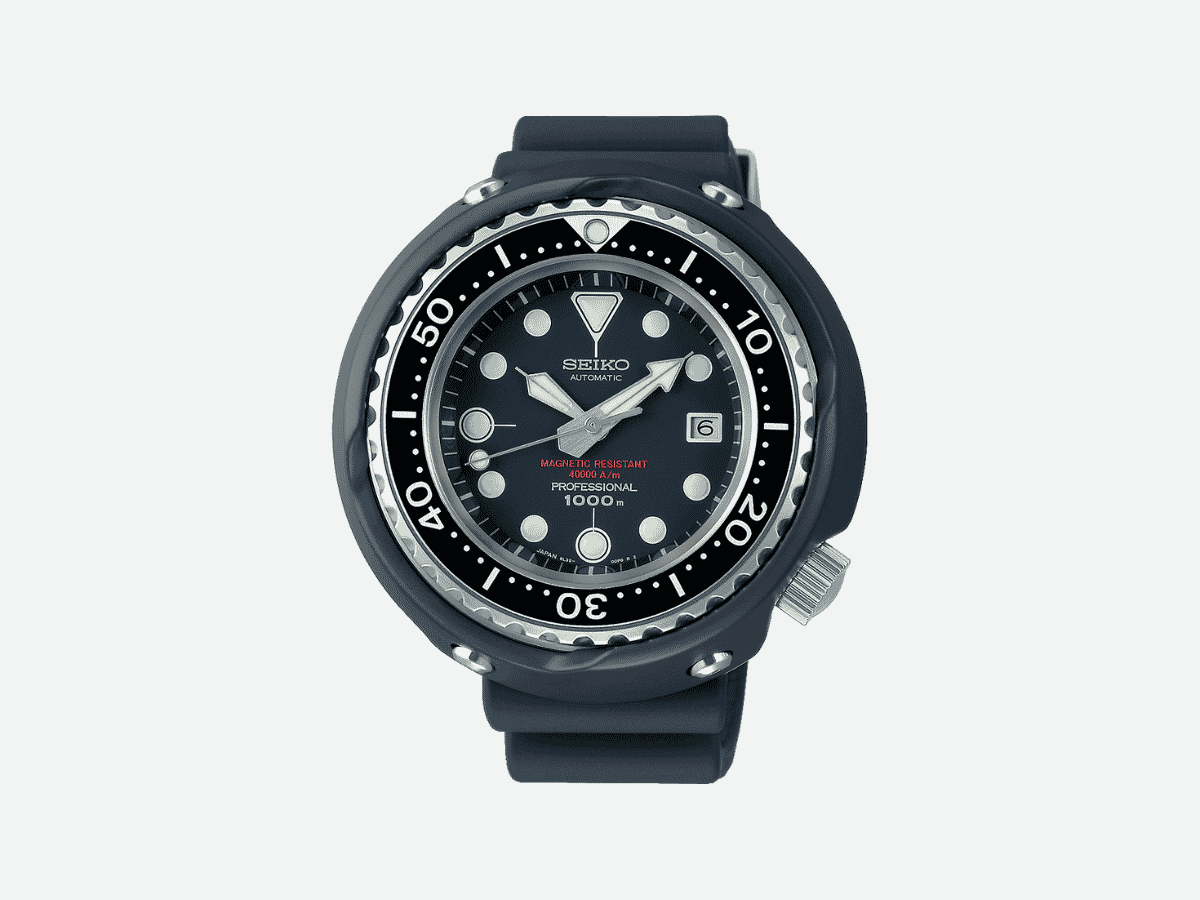 Not one to simply rehash the past, Seiko has also unveiled one new addition to the mix. To coincide with the 55th anniversary of Seiko’s foray into the depths of dive watch-territory, the Japanese icon has announced an all-stainless steel reinterpretation of the original timepiece, offering a new level of sophisticated durability.

The 1965 Diver’s Modern Re-Interpretation is characterised by its slim profile, creating a more contemporary silhouette on the wrist. Add the lowered centre of gravity and you’ve got a clean-cut incarnation of the rugged release ideal for the 21st century. Like the original piece and the Re-Creation trilogy, the Re-Interpretation cops the special 55th-anniversary blue-grey dial. It is powered by a calibre 6R35 that delivers a power reserve of 70 hours and, in an added touch of versatility, this reimagining comes complete with both a stainless steel bracelet and silicone strap. 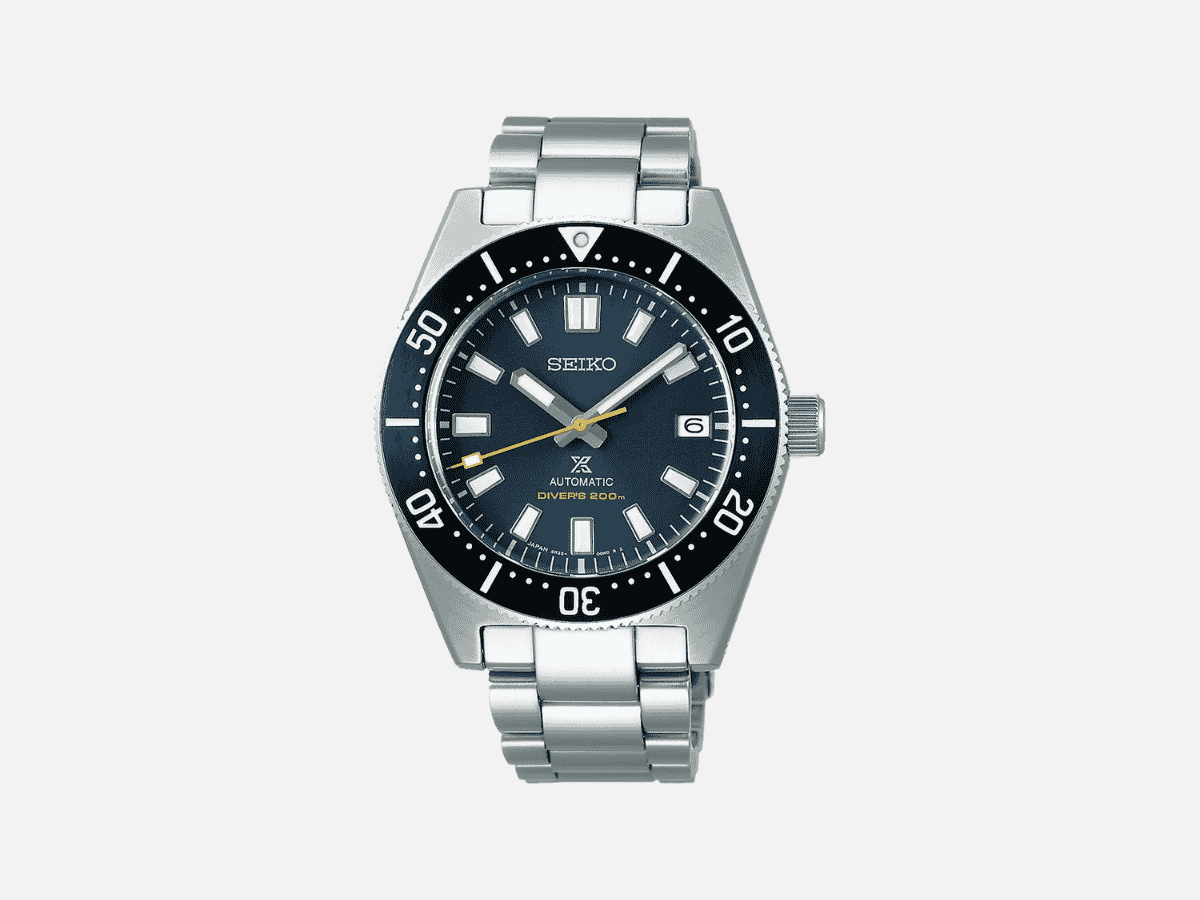 Born in 2019 as the pinnacle of Seiko sports watches, the LX Line expands diver’s watch technology into innovative new territory. Striking a balance between modern style and heritage sports performance, the LX Line is Seiko at its very best. In fact, the LX Line takes direct cues from those early Antarctic expeditions and the Everest-topping crusades. The limited-edition LX dial brings to life the mysterious aquatic moss pillars unearthed by Japanese researchers at the bottom of a lake in Skarvsnes Foreland. Found approximately 55 kilometres from Showa station, a Japanese research station in Antarctica, the unique moss pillars are formed over many centuries of sustained pressure. The LX’s green ceramic bezel symbolises the distinctive colouring of the Antarctic seascape, but there’s more to this sports watch than simply good looks.

The limited-edition LX Line is based on the historic 1968 Diver’s watch, Seiko’s first with 300m water resistance and a high-beat movement. This variation scores a movement complete with Seiko’s innovative Spring Drive Calibre 5R65 mechanism, offering a unique glide motion seconds hand and a power reserve of 72 hours. Inheriting the original case design, the LX incorporates some of the contemporary elements we saw on the 1965 Diver’s Modern Re-Interpretation. The Zaratsu-polished mirror surface and lowered centre of gravity evokes an aesthetic that breaths new life into the heritage-inspired design and people are responding. The LX line took out the Diver’s Watch Prize at the 2019 Grand Prix d’Horlogerie de Genève, solidifying this piece as a modern classic. 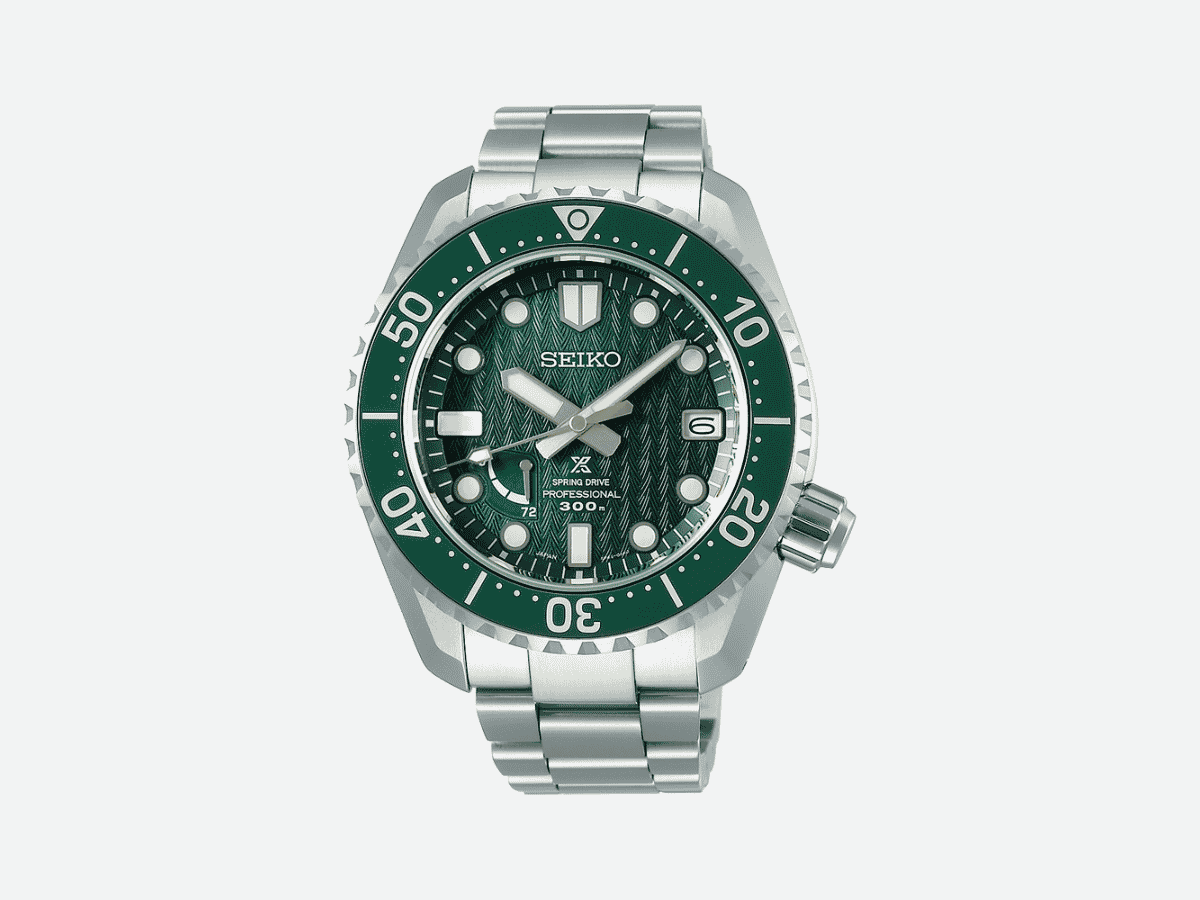 After scaling the heights of Mt. Everest and delving deep into the watery depths below, it’s fair to say a celebration is in order for the Prospex line. Seiko’s most durable and resilient release remains a beacon in the Japanese watchmaker’s collection, marked by a lifetime of rugged sophistication. The endless pursuit of performance under pressure has characterised the collection for over 55 years and with four new Re-Creations recently landing, we suspect for another 55 more. 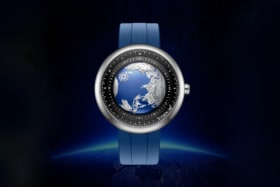