There’s a lot to be said about something that can ostensibly help you get laid, but do aphrodisiacs work, or is it all just a big pack of lies? And if so, why aren’t they more common? Are aphrodisiacs real, or just a placebo for confidence? Whether natural, easily sourced foods that come with old-wives tales attached or dodgy herbal supplements that get spruiked via email newsletters, everybody’s fascinated with the idea that a consumable could increase your sexual pull.

You may also like:
7 Ways to Optimise and Boost Your Libido
Only Hot Guys Do Well on Tinder – A Scientific Study
Study Finds Having Tattoos Gets You More Sex

And let’s be honest – the desire to be desirable is a multi-billion dollar industry. Every day us blokes either wear an expensive aftershave, style our hair a certain way, wear a nice suit or flash a posh watch, all in the hopes we’ll be noticed by the opposite sex – if it weren’t for sex, we’d still be in bearskin loincloths (or perhaps it was these loincloths that got us where we are…)

While a bevy of dodgy statistics and anecdotes plagues the internet on the subject of aphrodisiacs, we’ve distilled down some of the more common ingredients in Cupid’s pantry and put it into a simple, easy to understand list for your reading pleasure, so that you can dodge the bullshit and get on with another day of relying on what evolution gave you. We’ve also added a proven strategy at the bottom to give you the extra help you might be after. Enjoy, shaggers. 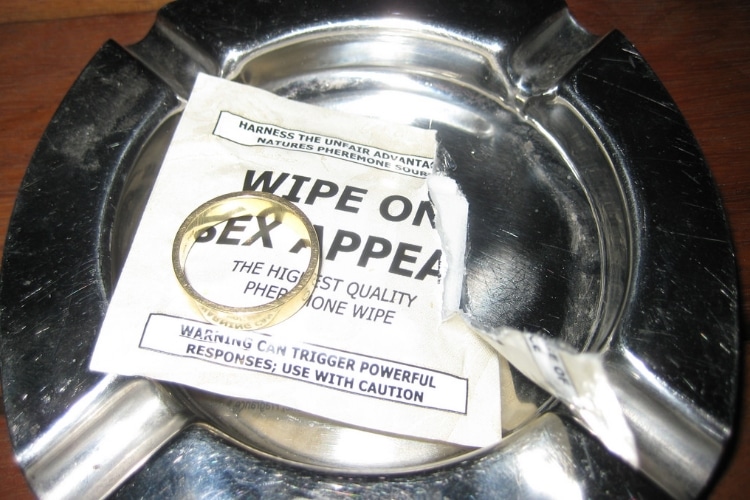 Thought we’d give this one pole position (heh) and get it out of the way early. If you are genuinely curious as to whether or not these work, aphrodisiacs are the least of your worries. While it’s true that pheromones are natures way of attracting a mate, they come out of your skin – not little KFC refresher towelette-esque sachets that are only sold in seedy pub pissers, trust me. As much as we’ve all bought one of these once because we were cooked and we’re hilarious (and definitely used it as per the instructions), save your $2 for the bus home. 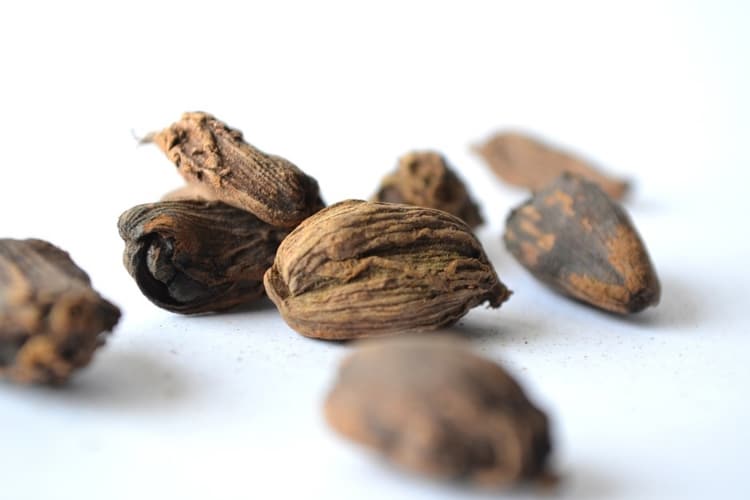 Absolutely zero proof on this making you hotter than you are but, fun fact, raw nutmeg is technically a psychoactive substance. It contains small amounts of Myristicin, a monoamine oxidase inhibitor. A large enough dose of Myristicin can induce convulsions, palpitations, nausea, eventual dehydration, and cause body pains – all of which will certainly send the opposite sex running for the proverbials. You’d need more nutmeg than is sensibly consumable before any of these symptoms show, so don’t get too worried – an eggnog or ten is still fine. But yeah, won’t get you laid. 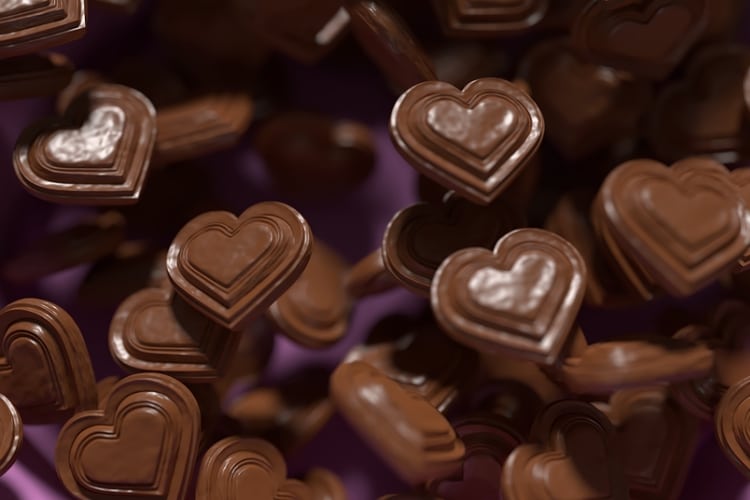 Chocolate can definitely help get you laid, but it’s got more to do with how much girls like eating it than it does to do with what it’ll do to your pheromones. Chocolate contains phenylethylamine (PEA), which is a natural mood enhancer, but this is not necessarily a guaranteed sexual stimulant. It might do something to lift your spirits slightly, but it won’t go far in making you any sexier. Turning up with a box of Belgium’s finest, however, is a proven strategy to maximise P in V potential. Super dodgy reports of this honey wine being an aphrodisiac. There’s a whole spurious backstory about newlywed couples being forced to drink it in Pagan times for a whole month in the hopes of conceiving (honey + moon – geddit?) but this is probably bollocks. It’s generally pretty boozy and tastes foul, so unless you’re gunning for a root in 4th century Europe (hey, we’ve all been desperate) then maybe give it a miss. 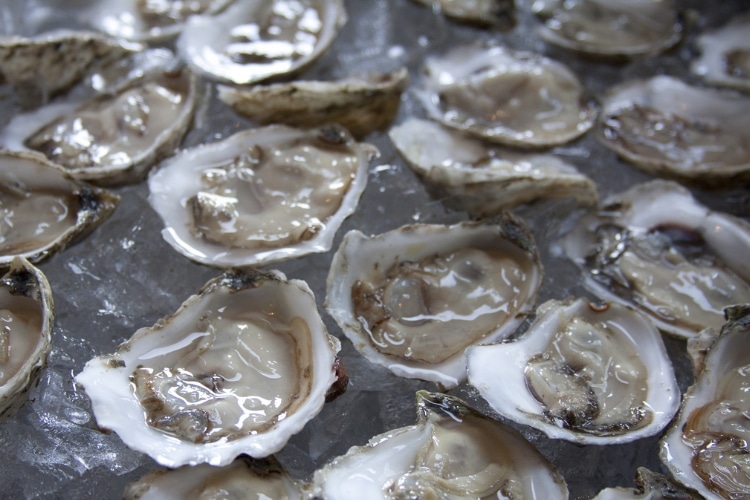 One of the oldest tricks in the book. Despite being high in zinc, which can increase both testosterone and fertility, a quick Google suggests that the reason they’re so often touted as a ‘sex food’ is purely because of their resemblance to the female pudendum. 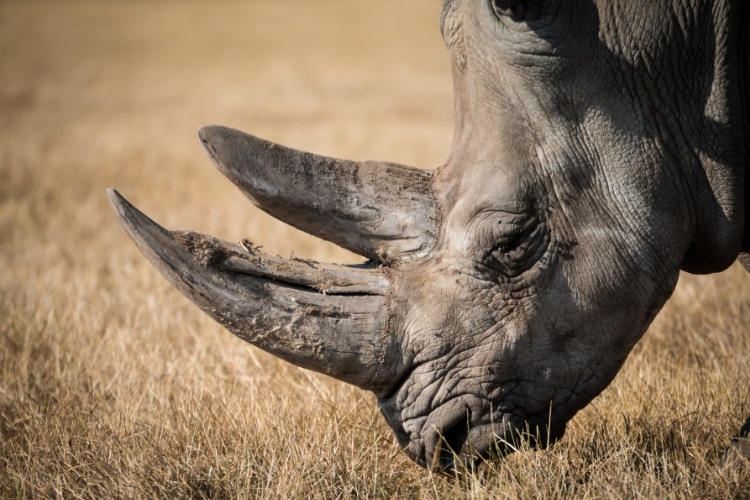 Straight up: if you think that condoning a hugely illegal trade that’s nearly wiped out an entire native population of a once-thriving species is okay, if it’s in the name of getting an erection, then the problem’s with your head buddy, not your dick. While rhino horn is a traditional Chinese remedy for a floppy wiener (no doubt because a rhino’s horn looks like a turgid knob), it’s ineffective and is definitely not an aphrodisiac. Stick to a dab of Brylcreem, a splash of Blue Stratos and Viagra. 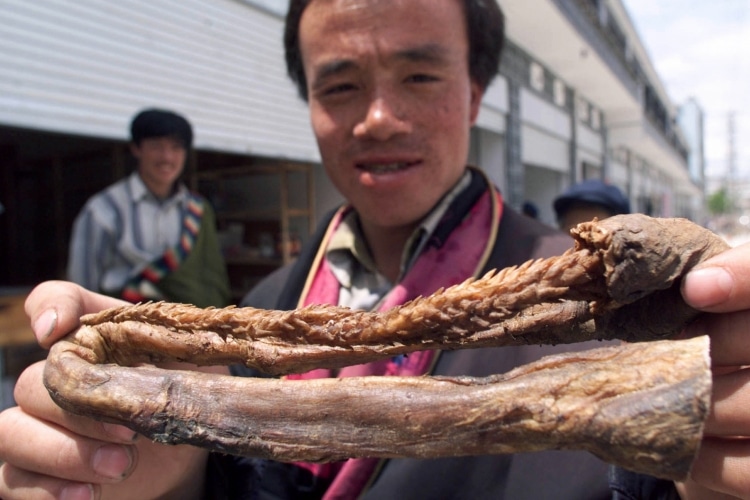 I’d like to point out that people who kill tigers for bullshit medicine can eat a dick. I’d like to, but I’d be eating my words – because that’s exactly what they’re already doing. Again, stop killing endangered things because your doodles don’t work. There’s nothing much more twisted than consuming the ground up powder of a dehydrated tiger penis in the name of sexual potency. Oh and, newsflash, it doesn’t work. 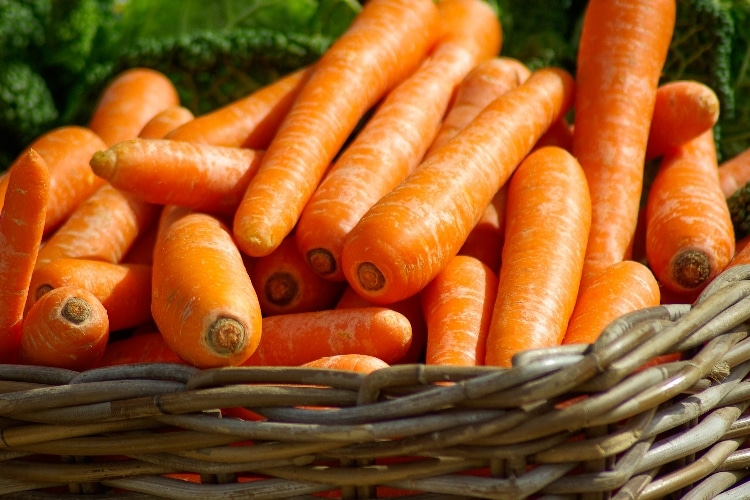 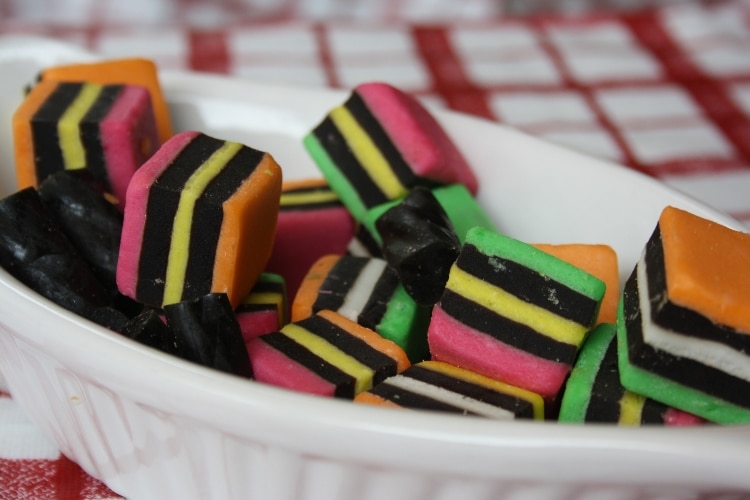 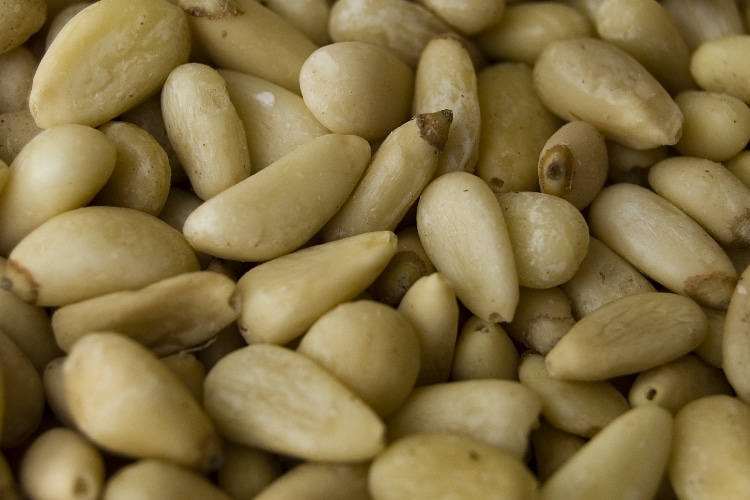 While everything on this list is essentially supposed to make women pine for your nuts (I’m so sorry), these won’t. All reports of pine nuts being an effective natural aphrodisiac are pretty sketchy, and they’re expensive to boot  – don’t waste your money being a sex pest and blending up a sex-pesto, you’ll be left with a tasty sauce but, ultimately, remorse. 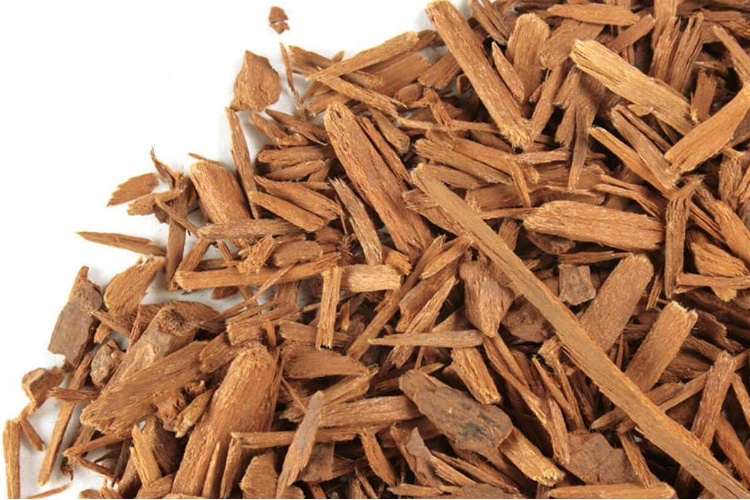 Derived from the bark of the Yohimbe tree native to Western Africa, yohimbine is a natural aphrodisiac supplement to increase sex-drive and improve erectile performance. While it is purportedly a mild form of naturally-occurring Viagra, it won’t make you any more attractive to potential mates. Fun to say out loud though. Yo-Him-Bin-EH. Try it. You’ve seen the emails. You’ve read that dodgy billboard on the way to the airport (how long has that actually been there?). You’ve often wondered if it could be real. The answer? Whaddayou think. Impressive though the botanical name epimedium grandiflorum may be, the sheen is largely lost when you hear it’s common names: flowered ‘barrenwort’ and ‘bishop’s hat’. Once again, it’s traditional Chinese medicine which, as we know, it utter nonsense. 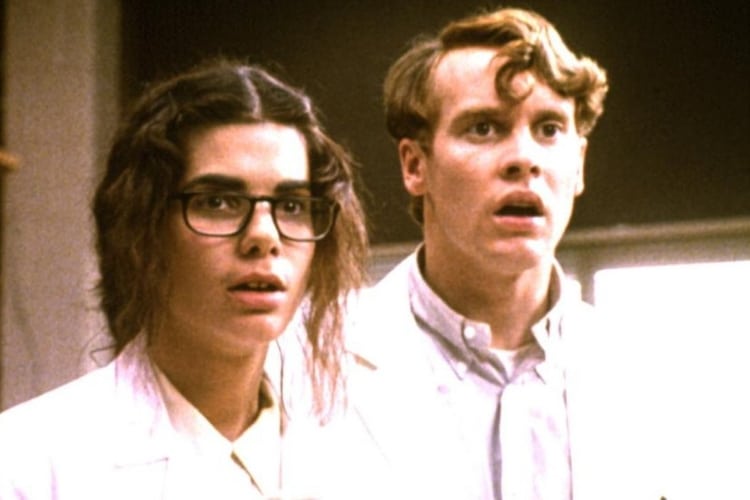 Also a great song; also not a real thing. 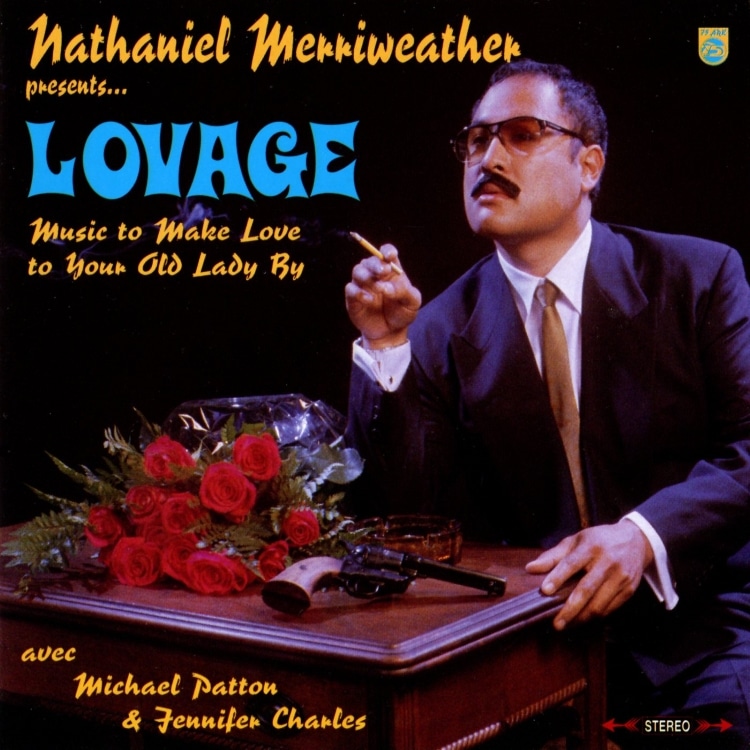 Lovage: Music to Make Love to Your Old Lady By is Nathaniel Merriweather (a.k.a legendary New York hip hop producer Dan The Automator)’s pet project, which he made with Mike Patton of Faith no More and Jennifer Charles of Elysian Fields. In short, it’s sexy background music that, in addition to a few candles, clean sheets and a little magic, will help you across the line. Don’t ever play anything you’ve named your ‘sex mix’ ever again.

You may also like:
7 Ways to Optimise and Boost Your Libido
Only Hot Guys Do Well on Tinder – A Scientific Study
Study Finds Having Tattoos Gets You More Sex 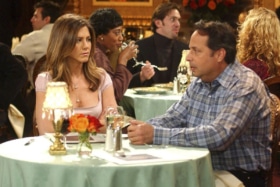