The 1961 Aston Martin DB4 GT Zagato was the child of a partnership between Aston Martin and the Italian auto factory Zagato. Zagato lightened the car and improved its performance. The original run was slated for 25 cars, but after its debut in the 1960 London Motor Show, demand failed to warrant all 25 and the production stopped at only 20. Even with such a short run, the DB4 still participated in the racing world.

The DB4 did have some popularity, which resulted in two subsequent waves of the car being produced. The Sanction II and Sanction III cars were even shorter runs. Sanction II only produced four cars from unutilized chassis numbers and were outwardly identical to the originals (it took bringing in taking apart an original to teach the workforce how to make the DB4). Each of these cars sold for over $1,000,000. The Sanction III’s were only a pair, using leftover spare body shells.

Bonhams is currently offering the “2 VEV”—this particular car being one of only two “VEV” quasi-works cars. It was driven by racing superstar Jimmy Clark. The car was raced 1961-1962 and competed most notably in the RAC Tourist Trophy Race in Goodwood. Later, in the 1980s and 90s, the car was raced by in historic racing.

This particular offering is a rare and valuable find, as replicas are a popular item on the market. Finding an original of such a limited run—and one that has raced—makes this car truly unique. 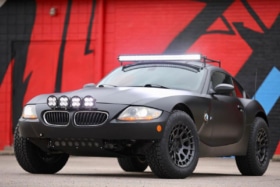