From mullet haircuts to power suits, men’s fashion in the ’80s was nothing if not unique. To a large extent, it was also quite outrageous. That said, certain aspects of ’80s clothing trends for men haven’t lost their stylish or expressive edge, hence the current onslaught of retro revivals. Plus, did slogan t-shirts and bomber jackets ever really go out of style?

Whether you want to dress like an ’80s boy or simply know which ’80s outfits men should avoid, we’ve got you covered. On our list of the top ’80s fashion trends for men, you’ll discover everything that makes the decade so distinguishable, memorable, and amusing. So crank up the synth-pop and dig out your old Nintendo because we’re going back to the 1980s.

It’s impossible to think of the 1980s without conjuring words like “decadent,” “cheesy,” “colourful,” and “excessive,” and ’80s men’s fashion trends duly abide. However, the decade was about far more than its loudest style statements. Indeed, there’s quite a lot of ground to cover between “The Lost Boys” and “Wall Street.”

As such, ’80s men’s clothing can mean everything from Air Jordan sneakers to casual t-shirts to baggy hip-hop silhouettes to athleisure wear to preppy fashion. Moving up to the hairline, the decade featured heavy metal perms, spiky mohawks, slicked-back haircuts, buzzcuts, and casual side-parts. Some of these trends have aged poorly, while others haven’t really aged at all.

At the end of the day, the 1980s were like any other decade of the last 60 or so years, in that they contained a little bit of…well…everything. Of course, that doesn’t mean you shouldn’t go to extremes when coming up with ’80s costume or fancy dress ideas. After all, rarely is it as fun to play dress up as it is when you’re doing it in the archetypal ’80s style. Here are some surefire ways to do it right. 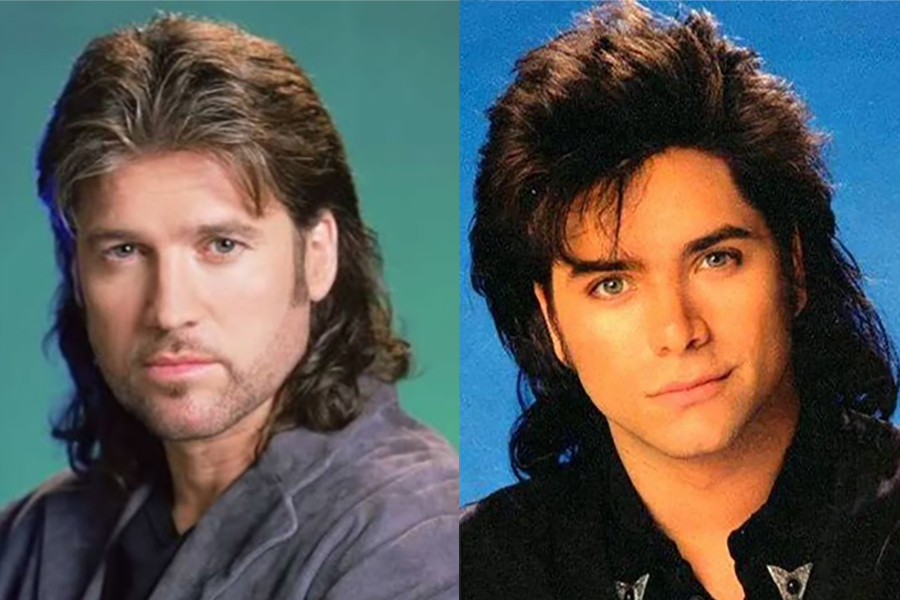 Ahhh, the mighty mullet. Is there anything more synonymous with dated men’s fashion than this oft-ridiculed haircut? We think not. Once popular among jocks and movie stars and everyone in between, it consists of hair that’s short in the front and on the sides, and then long in the back.

If you’re looking for ’80s costume ideas, throw on a permed mullet wig and consider yourself covered in the hairstyle department. And if you need more visuals of mullets than the ones we’ve provided, the Internet is all too happy to oblige.

Picture a sweater that’s about two sizes too big and you’re now in baggy jumper territory. Worn by men and women alike, this ’80s men’s fashion trend commonly featured loud colours and patterns, the kind of which you’d only see nowadays at a retro-themed costume party or ugly sweater contest.

Among all the types of ’80s clothes, men might very well fear this one the most, if only because it’s aged so poorly. It almost literally haunts old yearbook pages.

With the release of the new “Top Gun” movie, now is the perfect time to revisit ’80s-style bomber jackets (aka flight jackets). After all, it was Tom Cruise’s Maverick who helped make these jackets so ubiquitous in the first place.

Back in the ’80s, bomber jackets usually appeared in a few separate forms. One was the airforce bomber, which delivered straightforward military vibes. The casual bomber, meanwhile, served up a preppier aesthetic. Last but not least is the letterman (aka varsity) jacket, an off-shoot of sorts.

We should also note that the ’80s didn’t invent the bomber jacket (which dates all the way back to WWI) and didn’t kill it off either. Thanks to celebrities like Kendall Jenner along with certain hip-hop stars, this vintage apparel is still quite cool and only in a slightly ironic sense of the word.

Ever heard of the show “Magnum, P.I.?” Set in Hawaii, it starred Tom Selleck as the title character, a private investigator who solved crimes when not drinking cold beer, picking up women, or working on his tan. Where are we going with this, you ask? To Selleck’s thick moustache and iconic Aloha shirts, naturally. A veritable trend back in the day, the combination still makes for a great ’80s costume idea.

If you thought bling was a relatively new concept, you thought wrong. For ages, men have been rocking flashy rings on their fingers. Of course, the trend really took off in 80s men’s fashion, when fashion was king and bigger was always better.

Some rings incorporated coat-of-arms-like imagery such as snakes or dragons, while others flaunted strips of diamonds and square buckles. It was all either very intimidating or very tacky depending on who you asked.

Today’s fashion faux pas (though it does make the occasional comeback) was a bona fide men’s fashion trend back in the ’80s. We’re speaking of double denim, which is when you pair denim jeans with a denim top. It’s the kind of ’80s outfit men wore all the time back in the day, allowing them to blend in with other double denim dudes. When it comes to ’80s fashion, men got this oh so wrong, right?

To be honest, doubling up on denim isn’t as bad as some people make it sound, permitted you do so with confidence and stick to the right colours or brands.

Athleisurewear is still a thing and we might have ’80s tracksuits to thank for it. To be clear, the tracksuit was not an ’80s invention. However, after ’80s hip-hop acts such as Run DMC and LL Cool J began wearing adidas get-ups as style statements, a men’s fashion trend was born.

While tracksuit materials and designs have improved or at least changed over the years, the core principle remains the same: this is proactive apparel you can wear outside the gym.

According to legend, you can go blind staring directly into the loud patterns and bright colours of an oversized printed shirt. Maybe that’s why they went out of style after the ’80s. Needless to say, this ’80s men’s fashion—which was just as popular among women—doesn’t say “retro” as much as it does scream it. You’ve been warned.

No list of ’80s men’s fashion trends is complete without the power suit. As much a uniform as it was a style statement, the most common examples delivered sharp cuts and wide shoulder pads. They came to us from designers like Armani Versace, who employed bolder colours and lighter fabrics than his predecessors.

If you were around in the ’80s, you saw power suits on Gordon Gekko in “Wall Street” and then you saw them on the actual Wall Street. Women were power dressing too, by way of tailored pantsuits and discreet jewellery. It was a good time to be ambitious!

Odds are you’re familiar with the Benetton polo shirt, but that doesn’t mean you’ve seen this wardrobe staple as it was worn in the ’80s. Picture a wide-open v-neck with the collar up, a gold chain, and ample amounts of chest hair and you’re getting the idea. Naturally, there were plenty of chaps who just wore it like a regular polo shirt, but that sounds far less dramatic, doesn’t it?

The Pringle jumper struck a similarly ironic accord, straying from its preppy foundations to become popular among football hooligans and the casual subculture. It’s then safe to assume that the ’80s saw a lot of bloodied-up Pringle jumpers!

Fluro is short for fluorescent and fluorescent is another word for neon and neon was freaking everywhere in the ’80s. From ’80s men’s fashion to bar signage to concert performances to college dorm rooms to hair dyes to movie screens to art exhibits, neon came roaring back into fashion. Even decades later, it’s hard to look at certain neon colours or patterns and not think of the 1980s.

You weren’t officially an ’80s bad boy (or girl) if you didn’t have at least one leather jacket, if not a closet full of them. Continuing a trend set forth by previous decades, the popular garb was worn by bikers, punks, heavy metal rock gods, S&M providers, and pretty much any other outlier with a fashion sense. If you want to dress like an ’80s boy, get yourself a leather jacket.

Gather ’round boys and girls, because we’re going to tell you about a great man from a different era. He went by the name of Michael Jordan and he changed not just the sport of basketball, but the entire merchandising-marketing complex…

Okay, okay…we know you’re familiar with Michael Jordan, just like you’re familiar with Air Jordan sneakers. Originally available as high tops, they struck a balance between fashion and function while paving the way for an industry-wide trend. More than must-have footwear, they also turned Nike into the global behemoth it is today.

In another chapter from the same imaginary book, Chuck Taylor All Stars made a considerable comeback in ’80s men’s fashion. If you can believe it, the Converse high tops were considered retro all the way back then. Here we are decades later and they’re still conjuring the same vintage vibe!

14. Highlights and a Pierced Ear

“But Mooooom, everyone has one!” that’s the sound of a bratty ’80s teenager begging his mother to let him get his ear pierced. By the time he shows up in school with his radical piercing, no one will know he whined for hours just to make it happen. Sealing the deal are some choice highlights in his hair, a sign of being cool if there ever was one. They’ll never know, he thinks, they’ll never know…

Seriously, ear piercings and highlights were to 1980s what tattoos are to the 2010s. In other words, half the male population had them and only a sliver of that population actually had the personality to back it up. It was a trend that carried well into the 90s until getting killed by boy bands like NSYNC.

Already worn by sports fanatics and frequent concertgoers, logo t-shirts were definitely nothing new in ’80s men’s fashion. Nevertheless, the decade saw merchandising and sloganeering go to extremes, as various brands and logos all but took over the nearest apparel store or gift shop.

To this day, the logo and slogan t-shirt industry remains quite robust. Step outside and it’s practically inevitable that you’ll see a witty slogan splashed across the front or back of someone’s shirt, or the newest urban label, or a team-based tee. Along similar lines, no one argues with a rock band shirt of either the retro or contemporary variety…unless it’s Nickelback, that is.