adidas has developed not only a new shoe but a new way of producing shoes. The company’s new Futurecraft 4D technology uses a combination of light and oxygen in its Digital Light Synthesis to create the ultimate running shoe. This new technology was developed in collaboration with Carbon 3D, a Silicon Valley, California company. The Silicon Valley technology firm uses a state-of-the-art technology involving light, liquid resins and oxygen to create 3D items. adidas says that the technology will allow the shoemaker to mass produce the Futurecraft 4D shoe.

Last year, adidas unveiled a 3D printed sneaker in limited numbers. They sold out quickly and were very hard to come by. Like last year’s Futurecraft shoes, the 4D sneakers will have adidas’ innovative Primeknit technology for handwoven style and extreme comfort.

The Futurecraft 4D Shoes will be different than adidas last 3D shoe in several ways. For one, it will have a different midsole. The midsole of the Futurecraft 4D will protrude horizontally, creating an interesting visual 3D effect. It almost looks like the shoe has a cool elastic hydraulic system. 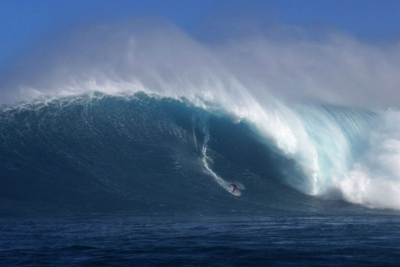 Sport
Super Swell Highlights: Watch Surfers Charge as Hawaii is Smashed by the Biggest Swell of the Year