Unsurprisingly, the best sushi Sydney has to offer is among the country’s top rolls. As a tourist town, Sydney offers a gateway to the world, and we believe that sushi may be the most versatile international food. This is, of course, if you know where to go. Luckily for you, we do know where you should go for your sushi across Sydney, and we’ve curated a list of the 17 best sushi restaurants in Sydney for your tasting pleasure. Let’s get a ‘roll’ on, shall we? 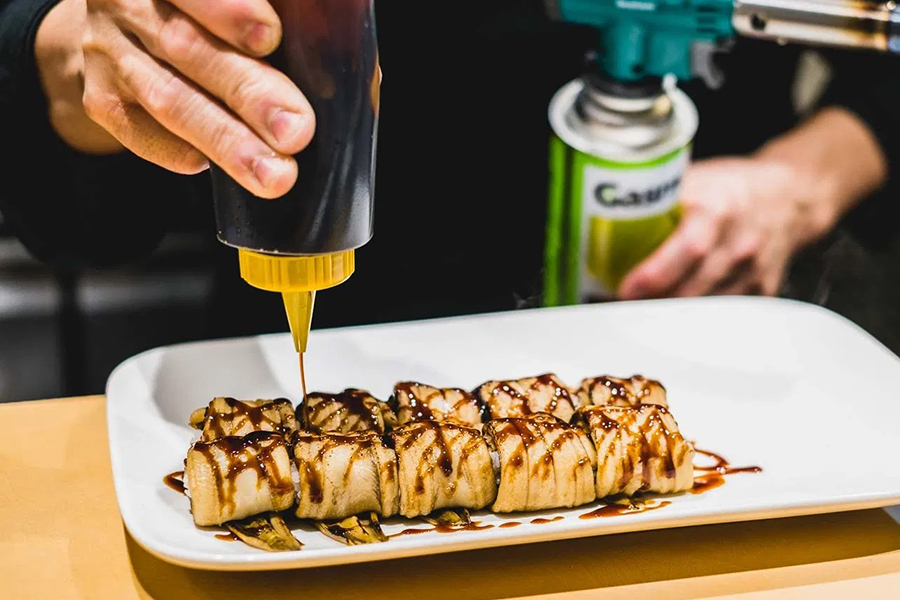 Kicking off our list of the best sushi restaurants in Sydney is Sashimi Shinsengumi. As the name may suggest, sashimi, a thinly sliced raw fish, is the specialty, but that doesn’t get in the way of their great sushi. The sushi is fresh and well balanced, so you’re not getting one mouthful of fish and the other rice. This is a great spot for lunch if you’re in the area but book ahead because free tables at Sashimi Shinsengumi are hard to come by. 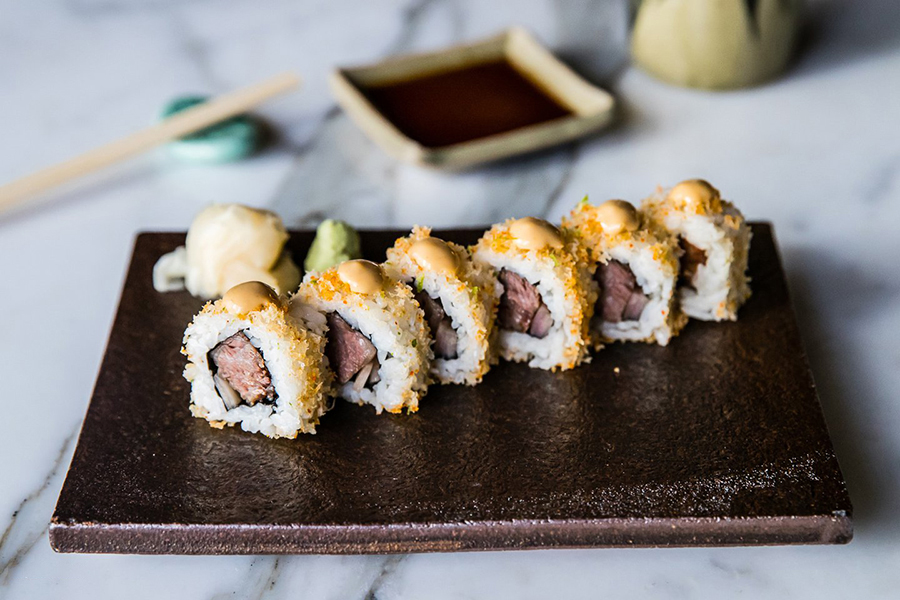 At Sushi e, the cuisine making is as much of a performance as it is a technique of cooking. Using traditional methods, each dish is made by hand in front of you, using only the best, well-cooked ingredients. If you’re in for a boozy meal, your sushi can be paired with sake, poured hot or cold. Sushi e is another restaurant you’ll want to book a table for before turning up. 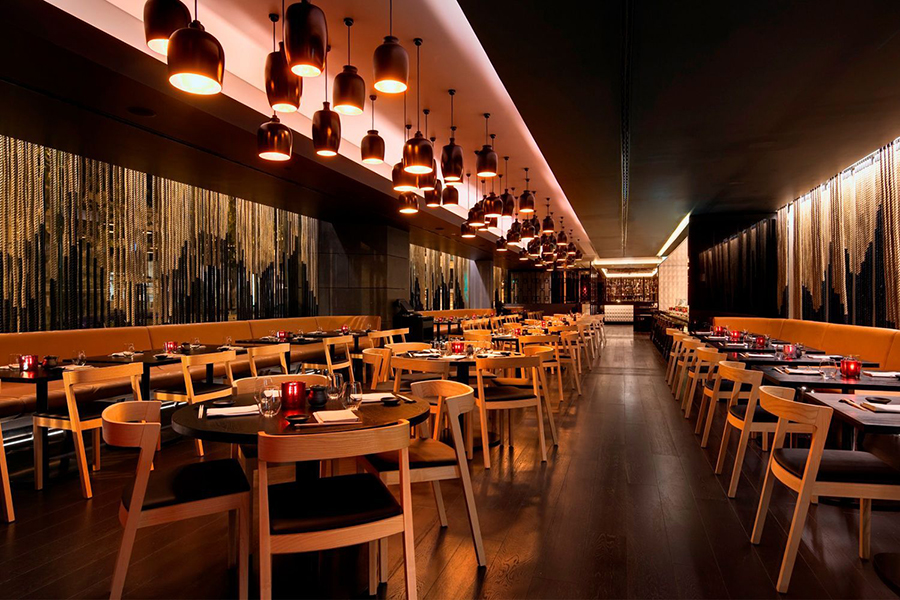 Sokyo provides a fusion of fresh, local Sydney ingredients with the techniques of traditional Japanese cuisine. Take, for example, the Japanese Barbeque roll, a combination of Karubi short rib, shiitake sauce and cucumber. Each plate of sushi is visually stunning and the bar is fitted out for all your thirsts from soft drinks to something stronger. Happy hour of both food and drink runs from 5pm-7pm weeknights, making Sokyo great for those end of week, after work events. 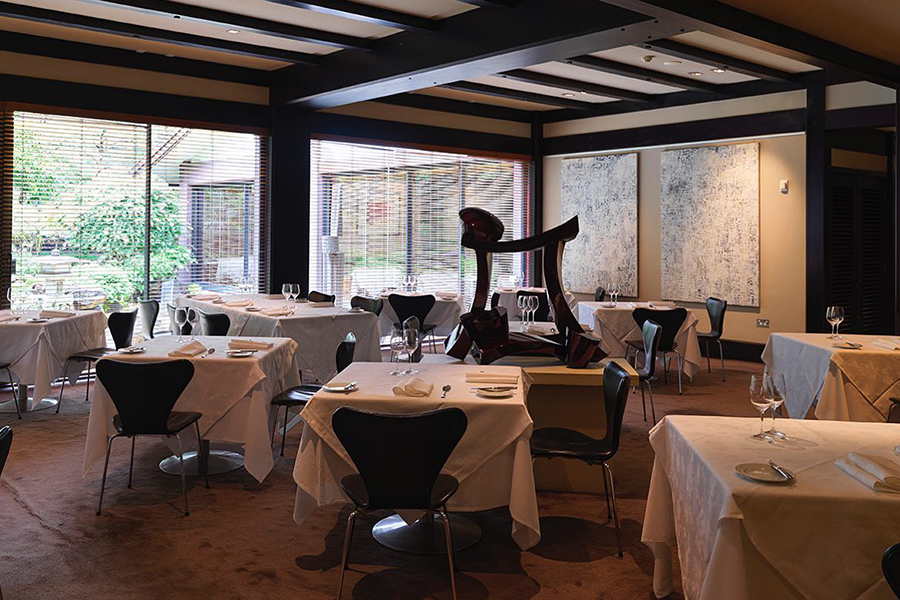 At Tetsuya’s Restaurant, they do more than just sushi. New and exciting flavour combinations are experimented with out back in their test kitchen, for the degustation menu. The menu covers a variety of meals to excite the senses. Taste and smell unique flavours, feel the textures of certain fish and puree, be amazed by the presentation of each plate. Tetsuya’s is one of Sydney’s most respected Japanese restaurants, so get yourself there ASAP. 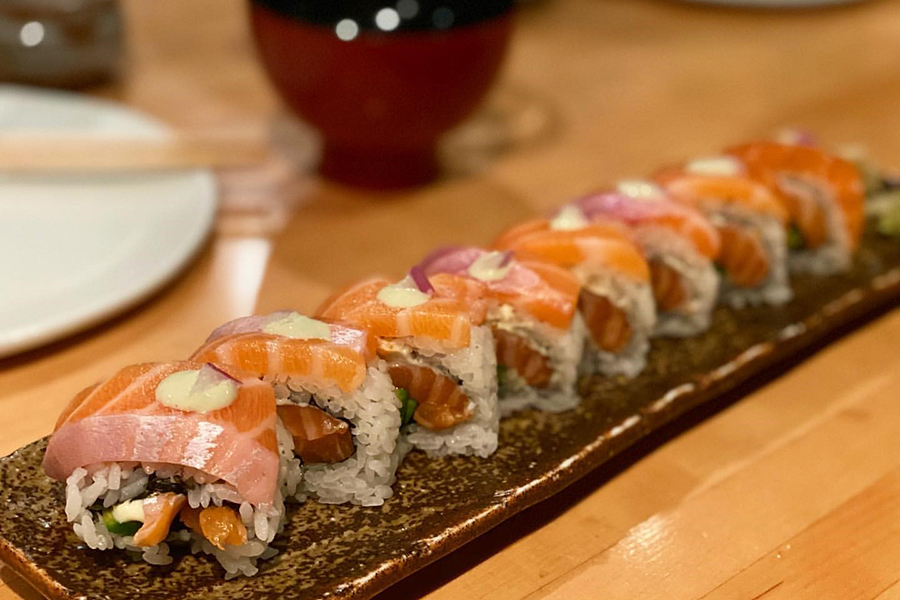 At Masuya Japanese Restaurant, the five-metre long sushi counter isn’t just a counter, it’s a stage. Watch as the fish, purchased daily, is transformed before your eyes into the freshest sushi you’ll find in Sydney. With sake and wines from across Australia and the world, sit back and enjoy every bite at Masuya. 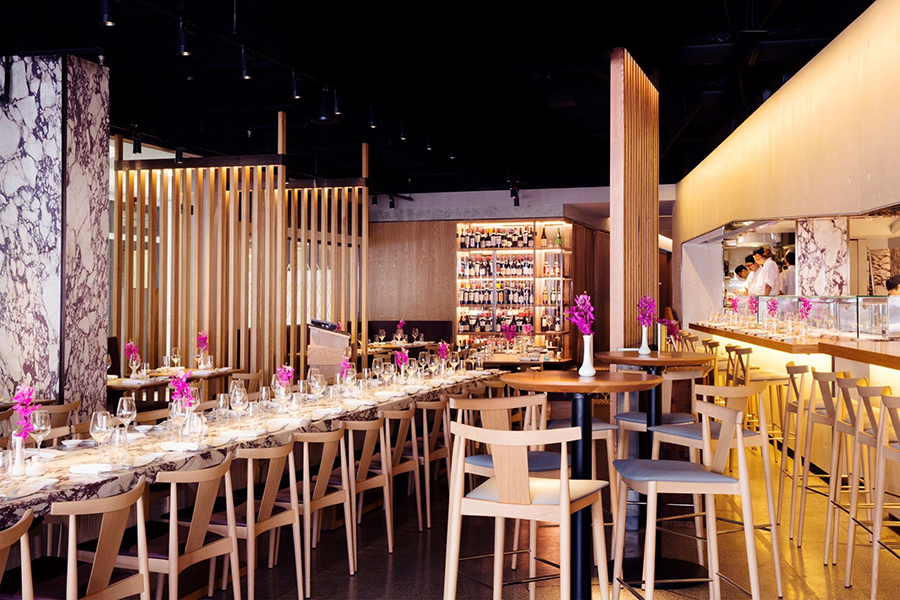 Located in Sydney’s Eastern suburbs, at the Saké Restaurant you can sit opposite the sushi bar, the kitchen, or the cocktail bar. We recommend the sushi bar, as you can again watch the fine craft that is sushi-making firsthand. The meals here are designed to be shared, with fresh, sustainably sourced seafood. If you’re not sure what to cook, take advantage of the omakase dining experience, where the chef will choose for you. 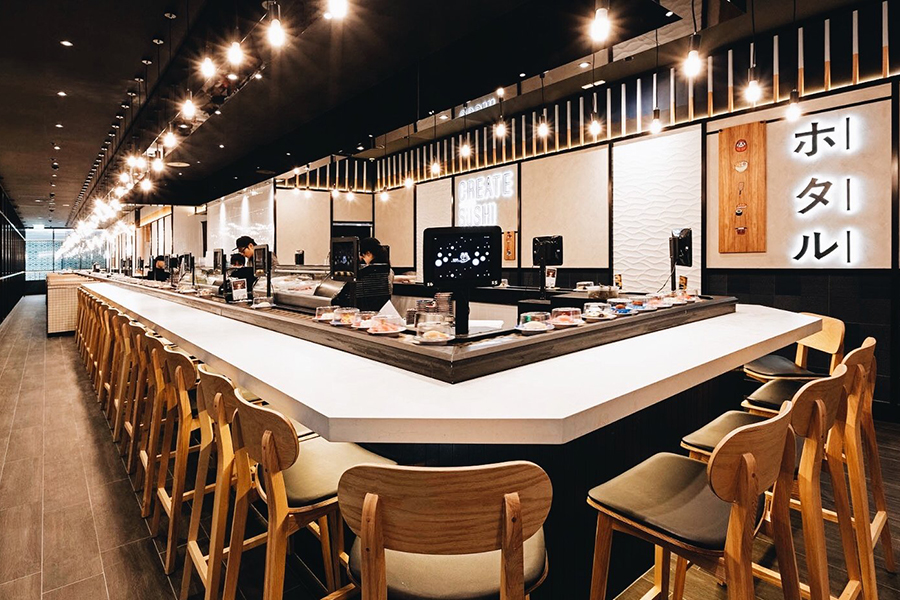 The first sushi train restaurant on our list, Sushi Hotaru maintains the quality of a traditional Japanese restaurant with ease. Far from the warm, conveyor belt plates you may be used to at sushi train, Sushi Hotaru has a huge variety of freshly made sushi for you to pick and choose from. Go with friends, and experience the much-loved novelty of trying to hold a conversation while also looking for your next plate. 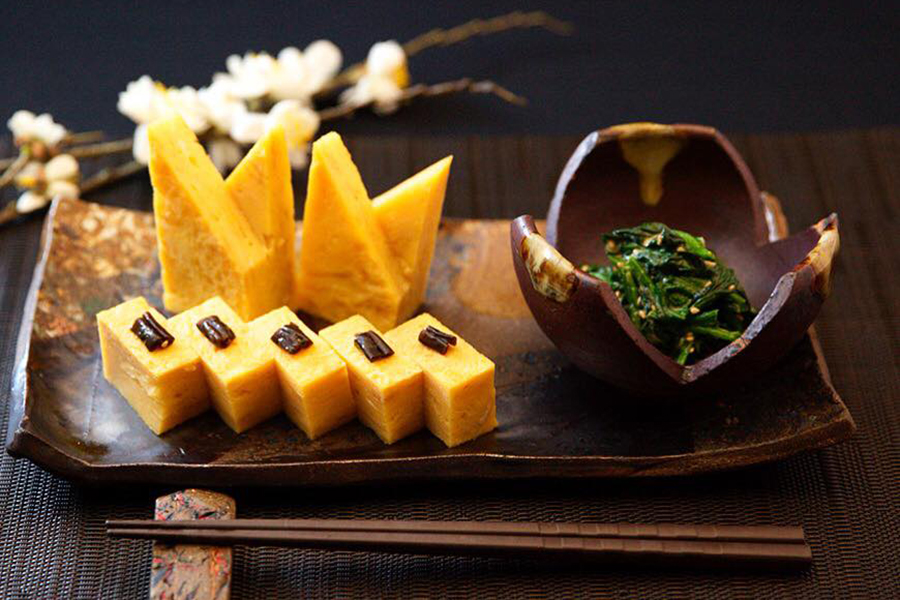 The décor of Azuma reflects the authentic, traditional Japanese cuisine served there. With walls littered with traditional and modern Japanese art, plates beautifully presented with sushi and sashimi, you’ll feel like you’re actually in Japan. Both premium sake and whiskey are on offer with your meal, with options for those new to the sake world as well. Sushi Rio is another sushi train restaurant on our list of the best sushi in Sydney. Sushi Rio provide simple cuisine done well, a great spot for anyone new to sushi as well as those who consider themselves experienced veterans. With a wide variety of choices, you’ll rarely see the same plate go around twice. If you’re looking for something in particular, you can ask the waiters or chefs themselves to prepare it for you. 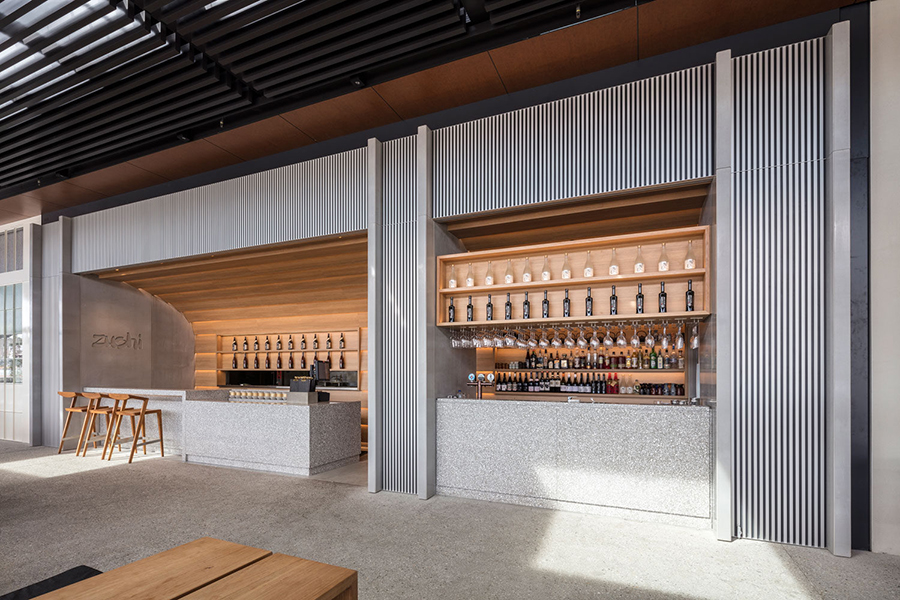 Zushi Barangaroo serves izakaya-style dining, which means informal dining that serves drinks and snacks. This makes the waterfront bar and restaurant great for a causal, after work feed. The kitchen staff at Zushi only use sustainable, seasonal product, meaning you’re getting the best sushi they can provide. They also have gluten-free, vegan, and vegetarian menu options, so everyone is welcome. 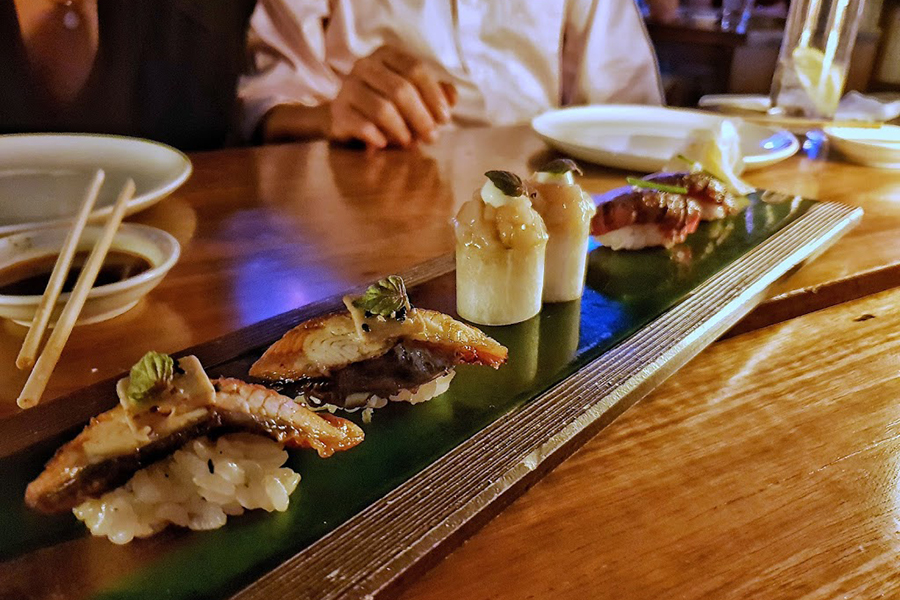 Another izakaya joint on our list, Toko Sydney serves foods that go hand in hand with the drinks. Winner of multiple awards, such as the best Japanese restaurant of NSW back in 2015, you can find Toko Sydney in a refurbished Surry Hills warehouse. The staff here believe the dining experience at Toko should leave a lasting impression, so expect to be full and satisfied on your departure. 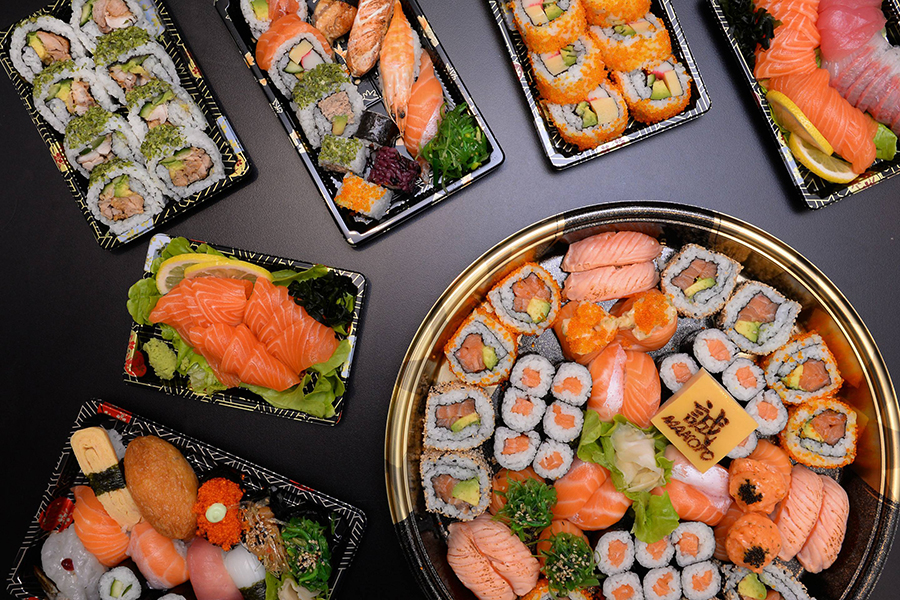 ‘Makoto’ in Japanese means ‘sincerely’, ‘truly’, and ‘from the heart’, which explains the great service at Makoto Sushi Bar. The prices of the sushi reflect the great quality you will receive, so don’t be scared off. The rice and sauces used for sushi are mixed by hand here, paired with fish and meats hand-picked by the expert chefs. This is a very popular spot with reviewers and Sydney-siders alike. 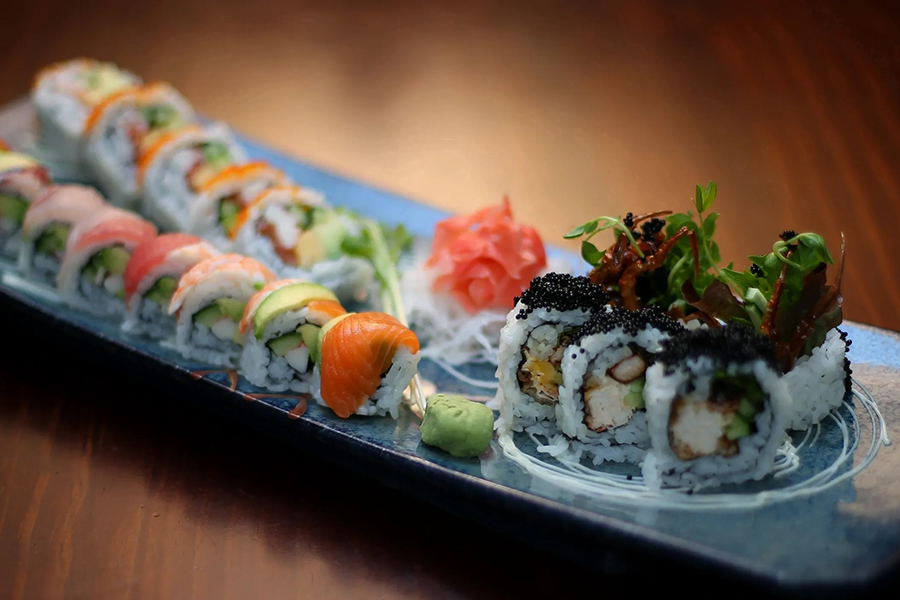 Sushi & Grill is one of the best Japanese restaurants in Sydney for takeaway. If you’re in a rush, know that the freshly made sushi will be of the same quality as all their in-store dishes. When dining in, you’ll see the wonderful presentation across a variety of Japanese cuisine, not just the sushi. This is a popular spot, however, if you do play on eating in, so book ahead. 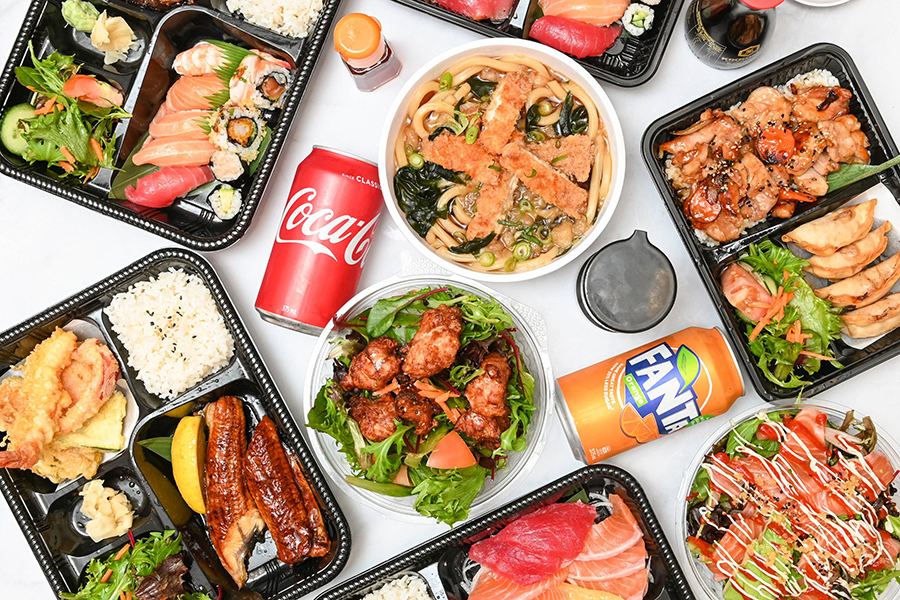 Sushi on Stanley provides great, affordable food that won’t break the bank, such as sashimi, teriyaki and much, much more. They’re almost always busy, so be sure to get in early if you’re wanting to eat in. Otherwise, take advantage of their great takeaway menu. 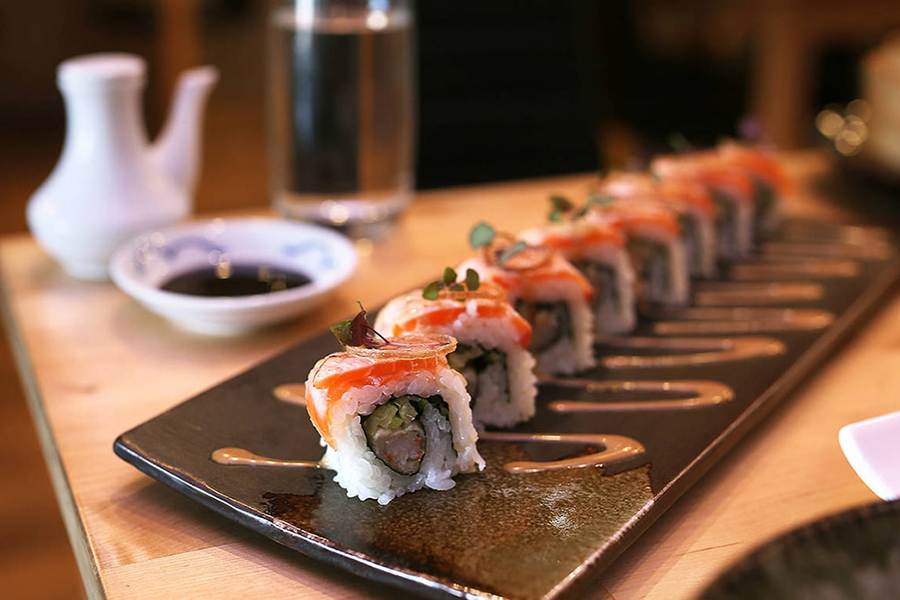 Named after the chef himself, RK San Contemporary Japanese Restaurant may be the best Japanese restaurant on our list. Training since he was 15 years old, chef RK brings some of the most authentic Japanese meals to your table. Truly a fine dining experience, you’ll find all your Japanese favourites like edamame, pork dumplings, and of course, sushi. 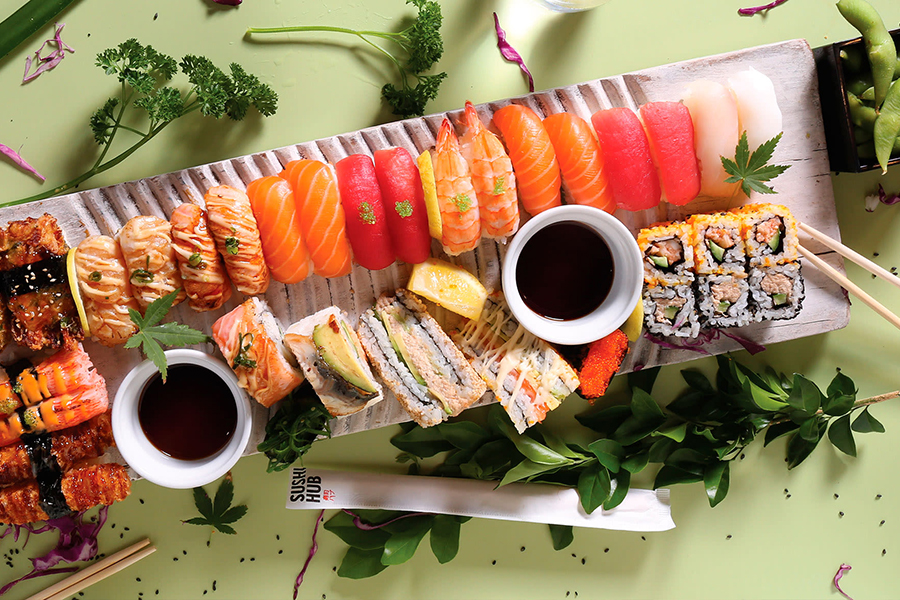 We all know Sushi Hub, a franchise that holds residency in almost every mall across the country. You may have even experienced a dud sushi roll from time to time, but not at Chifley Plaza. Sushi Hub Chifley Plaza serves great-tasting, affordable sushi to go, for all occasions. If you’re hosting an event, or it’s your turn for the office lunch run, Sushi Hub Chifley Plaza also provides platters with all your favourite flavours. 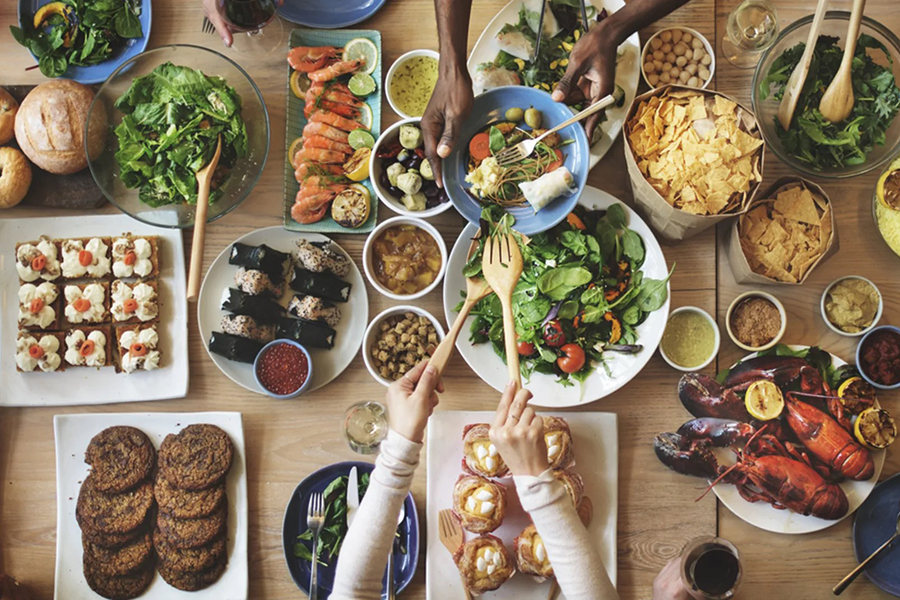 Closing out our list of the best Japanese restaurants in Sydney is Ryu, another great sushi train restaurant. ‘Ryu’ means ‘grilled meat’ in Japanese, which is exactly what you’ll find on the menu here. This is higher quality sushi than you’ll find at your usual franchise mall train, and is a great way to fuel up between shops, or fill up before checking out a movie.

Where is the best Sushi near Sydney CBD?

According to Google Reviews, the top-rated sushi restaurants in the Sydney CBD include Sushi & Grill, Azuma and Sushi Hotaru.

What is the best Japanese restaurant for sashimi in Sydney?

If you are looking specifically for sashimi in Sydney, we recommend visiting Sashimi Shinsengumi and Zushi Barangaroo. These spots are are great sushi restaurants in Sydney for sashimi.

If you plan on moving across the continent and opting for some udon, Sushi on Stanley also sell noodles in Sydney.

Read more about Lachlan About Man of Many
The latest Furniture
TOMM¥ €A$H's New Lounge is Anything But Half-Baked