Heralded as the supercar you can drive every day, the 2021 Porsche 911 Turbo lives up to its name, and then some.  When the brand introduced the first 911 Turbo to the world back in 1975, you’d have been laughed at for suggesting a Porsche could ever achieve 0-200km/h in under 10 seconds. But that’s exactly what we have here, a spaceship of a vehicle that teleports its driver at speeds the world might never have imagined.

Have we reached peak petrol? Maybe so, but this car was as much a poster child for every kid’s wall then as it is now. Yes it’s understated, and yes the overall shape hasn’t changed all that much through 40-years, but where this car lacks in emotional character on the surface, it more than makes up for it with a stonking amount of performance. So much, in fact, it’ll shame just about every car on the road today.

You’ll also like:
2021 Alfa Romeo Giulia Quadrifoglio is the ‘Italian Fling’ We All Dream Of
2022 Mercedes-Benz EQS All-Electric Luxury Sedan Set to Tackle Tesla
Novitec 812 GTS Ferrari Takes a Classic to the Extreme 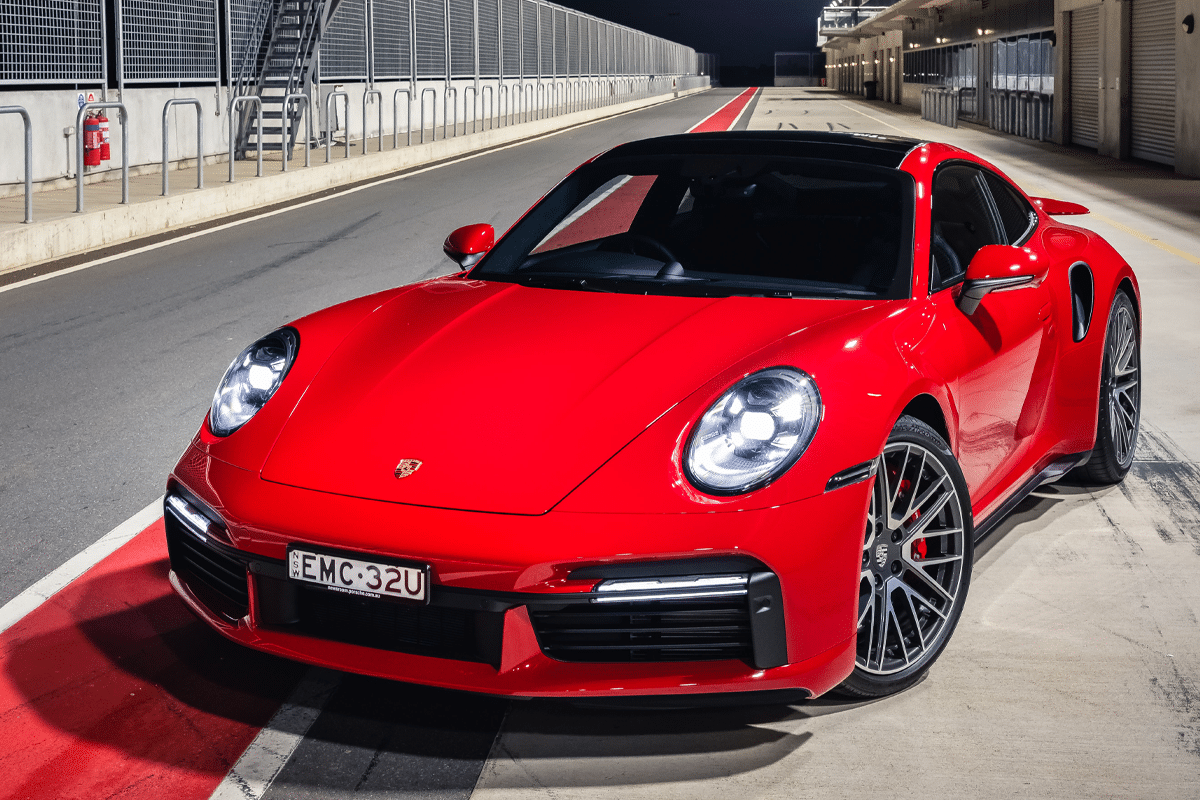 Porsche engineers refer to the 911 Turbo as ‘the most perfect sportscar ever’. And we had high expectations of the 911 Turbo as we made our way down to ‘The Bend’ Racetrack in South Australia. Spending some time with the car on track would be the perfect way to test the latest iteration. Because we knew it would perform well on the street, but you can’t claim to be the best everyday supercar if you can’t walk the walk on the track.

We started our day bright and early, jumping right into the driver’s seat of Porsches latest all-electric Taycan Turbo and Turbo S, conducting a ‘Launch Control’ activity that put the car through its paces in an 8th-mile sprint (more on that to come). And as expected, the acceleration was brutal. Our breakfast only just began to settle when it was time to jump straight into the 911 Turbo for a couple of laps around the racetrack. The Bend is hallmarked by fast-flowing corners, sneaky elevation change and a few tricky tightening apexes that suit the 4wd chassis of the Turbo to perfection. With a lead/ follow setup and V8 Supercar driver Luke Youlden in the lead, we put the ‘everyday supercar’ through its paces.

Let’s get this out of the way first, this car is absurdly fast. So much so, you have to mentally prepare yourself the first couple of times you put your foot to the floor, because if you’re not ready for the 750Nm of torque to hit. You’ll likely have a hard time keeping your breakfast down.

The torque curve starts as low as 2250rpm and by the time the 3.8-litre twin-turbo flat-six clocks 5000rpm you’ve combined that torque hit with nearly 400kw of power. The result is prolonged acceleration that glues you into the seat with force. There’s no lag, it’s addictive, and once you adjust to the sensation it’s more than manageable thanks to the 4wd chassis. 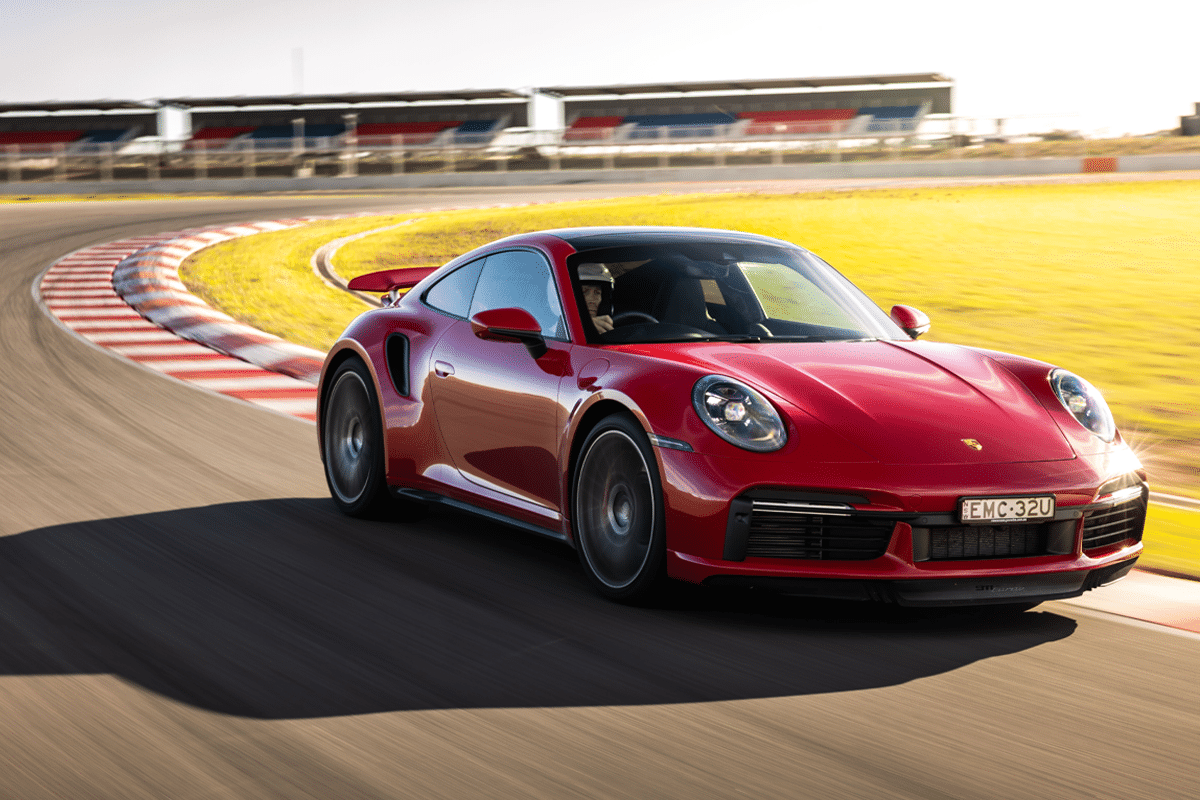 You’d be hard-pressed to find a car that is this easy to drive fast. And after pressing on for a lap around The Bend, you quickly begin to feel at home in the car. Everything feels linked together, and thanks to rear-wheel steering, the 911 Turbo feels far closer to an RWD car than imagined. You have to push the car far beyond your own capabilities to find the limits of the system, because then, and only then, will you actually find any hint of understeer. The likes of which can all be quickly figured out by a boot full of throttle, and a little ‘correcting’ slide will ensue.

For such a technically advanced machine, the car feels suberbly connected, both through the wheel, seat and then to the road itself. There are massive brakes up-front, and the ABS system is so advanced that you can approach turn 1 at The Bend in excess of 260km/h, bury your foot in the brake pedal, and then viciously accelerate out the other side. The way the systems interact is outstanding and is the highlight of this exceptional vehicle. 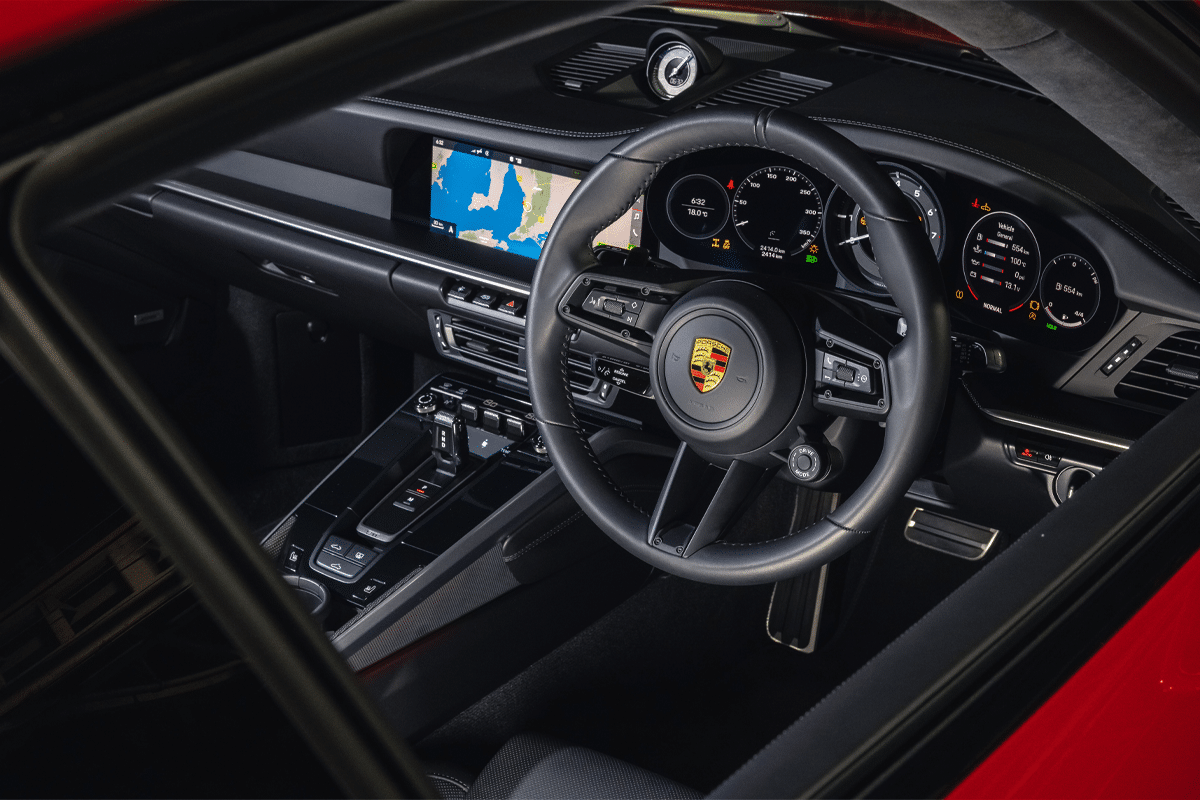 We don’t always mention the interior of vehicles when we test them out on the track, however, it’s worth noting in this case. After all, the 911 Turbo claims to be ‘the most perfect sportscar ever’, and to achieve such grandeur, it must have a stunning interior.

As you move into the cabin, you’re greeted by a GT sports steering wheel that offers great thickness and feel, highlighted by thumb rests and a sporty 12 o’clock marking. There are three driver’s seat options, including the famous full-carbon bucket seat straight from the ‘GT’ cars (a must-have). For the driver, there’s a total of five displays on the instrument cluster. Reducing to just three when you place the car into race mode for full focus on the track. 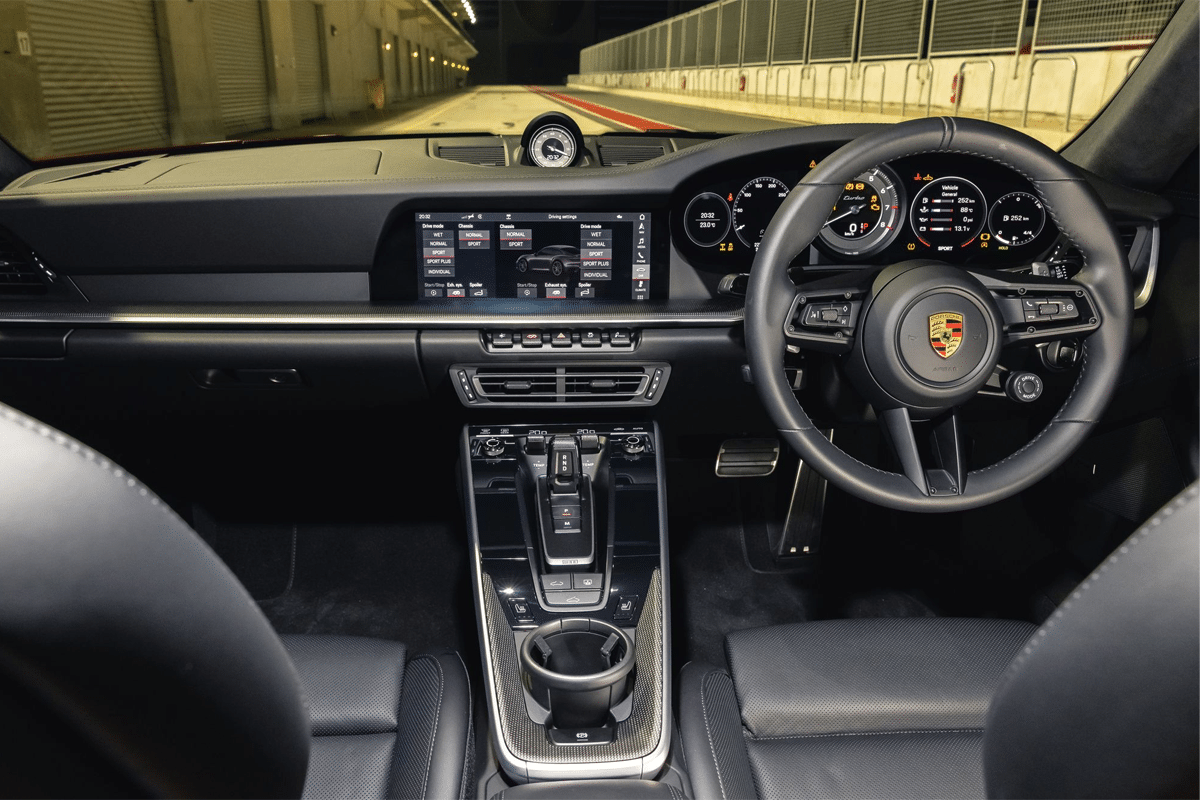 The 10.9-inch touchscreen, with Apple Carplay, ignites the dashboard with a clear interface that’s fully customisable thanks to Porsche Connet. The technology seamlessly transitions between your mobile and the car itself. With the app, you can check the vehicle status of the vehicle at any time, including fuel level and tyre pressure. You can even send the next planned route to your 911 Turbo before you set off.

As evident, the 911 Turbo ticks all the boxes when it comes to technology, features, and interior customisation. It’s got all the hallmarks of a great daily driver and above all, it’s a beautiful place to be. 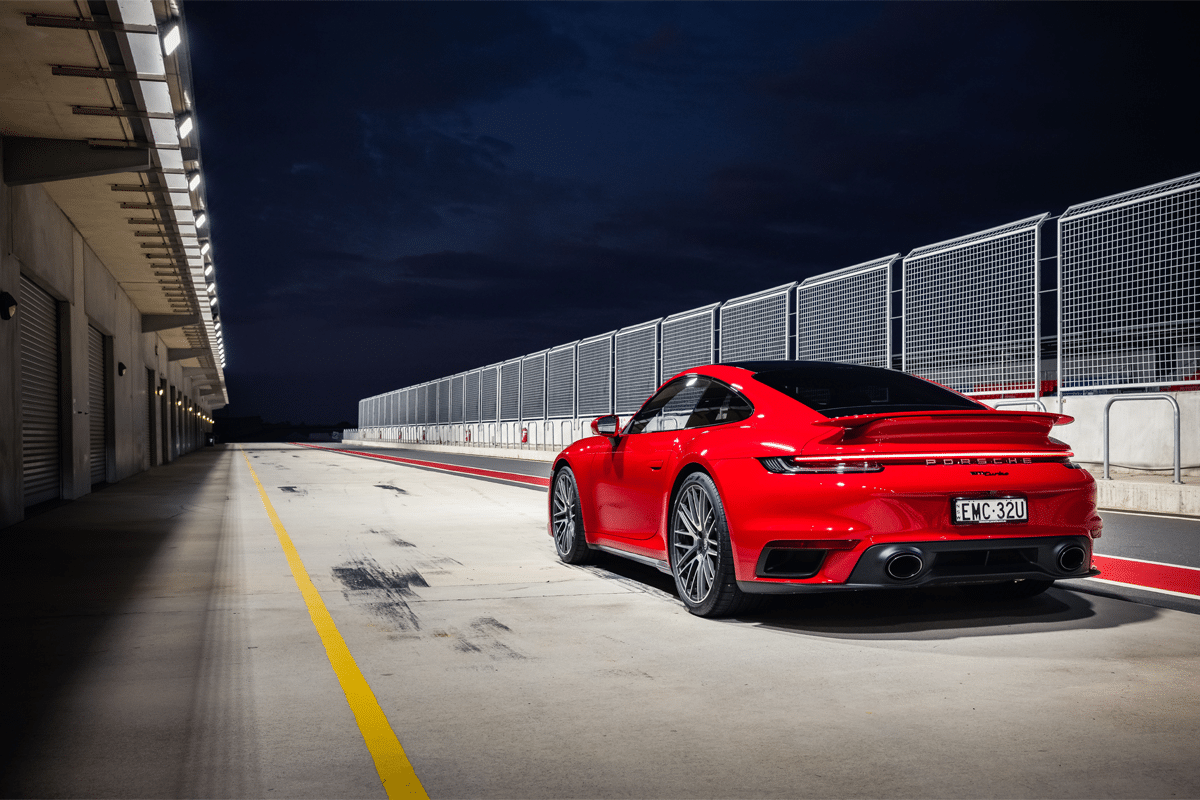 Is the 911 Turbo, ‘the most perfect sportscar ever’? We’ll go as far as to say that the 911 Turbo is the best everyday supercar, and it has been for at least the last 20 years. It lives in a class of its own when it comes to outright speed and performance packaged in a chassis comfortable enough to drive every single day. And why wouldn’t you? It’s an outstanding machine.

The only real competition comes by way of its big brother, the Turbo S. When you opt for this ‘Turbo’ model over the big brother ‘Turbo S’, you’ll miss out on goodies such as active anti-roll bars, gigantic carbon-ceramic brakes, and about 80hp. But, (and it’s a BIG but) you’ll also save yourself about $80 grand. And when you consider the Turbo variant is only 0.1 of a second slower to 100km/h and the circuit dynamics are still so strong. There’s only one piece of advice we can give. If you have the money, go and buy one right now, and drive it every. single. day.

You’ll also like:
2021 Alfa Romeo Giulia Quadrifoglio is the ‘Italian Fling’ We All Dream Of
2022 Mercedes-Benz EQS All-Electric Luxury Sedan Set to Tackle Tesla
Novitec 812 GTS Ferrari Takes a Classic to the Extreme

Cars, Gaming
The Porsche Vision Gran Turismo is One Hypercar You Can Actually Afford