Turns out the Austrian apple doesn’t fall far from the tree. Arnold Schwarzenegger’s son, Joseph Baena is following in his famous father’s footsteps, getting super ripped and posting a bucketload of selfies to make us all feel inadequate. But it’s the most recent few images that are causing a bit of a stir online. Baena is using the isolation period to work on his fitness poses, even recreating an iconic Arnie photo.

The Beana/Schwarzenegger story is an interesting one. Joseph is Arnold Schwarzenegger’s son from an affair with the family housekeeper, which made headlines a little over a decade ago. People started to notice to resemblance between the two, which here in 2020, is unmistakable. The 22-year-old big rig has seemingly been in the gym since birth but of late, Beana has certainly stepped up his Insta-game.

Boasting close to 150,000 followers on the platform, he’s still got a little bit to go to catch up to his famous dad, but he’s well on his way. Some fans are even remarking that he looks like “Arnold 2.0”. It’s not the first time Beana has recreated a famous Arnold Schwarzenegger scene, however. Back in 2016, Beana filmed a version of the badass bar scene from Terminator 2, which we think is pretty bang on. 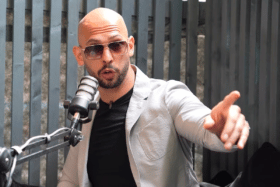