If there are but two things we do well in Australia, it’s setting stupid traditions and proving ourselves to be dabsters at finding new and interesting ways to ingest booze. We’re the only nation with a prime minister who simultaneously held the highest office in the country and a Guinness World Record at necking a yard glass full of ale (okay, it’s hard to research that perfectly, but we assume he’s the only one).

While the classic act of skolling a bevvo is a pisspot’s respectful nod to the Hawkies and McKenzie’s on which this great country was built, there’s a new fascination for drinking out of footwear that’s swept not just Australia, but the whole world, and we’re sure that Bob and Barry mutually reckon it’s a beaut.

The Shoey is the almost self-explanatory act of drinking out of your shoe. Sounds stupid? Who gives a shit. While the origins are hard to perfectly ascertain, one of the earliest recorded instances of the feet-flavoured pastime is from a Rusty video featuring boozed up teenagers The Mad Hueys knocking back frosty UDLs (pronounced ‘oodles’ if you know where you’re from, son) out of their respective sneakers and acting like they had more than just a few roos loose in the top paddock.

Since then, the instantly appealing craze has taken off, with the likes of Gerard Butler, Valentino Rossi and nine pissed up Aussies in budgie smugglers who learnt the hard way that Islamic nations don’t take too kindly to slurping Resch’s from your Reeboks all doing us proud on the world stage and reminding all far and near why Australia is the greatest country in the world.

Here’s Man of Many’s current list of the greatest shoeys of all time, although we’ve faith that as time goes on, the list of legends who put lips to their loafers to inhale a lager will only continue to grow.

Touted as one of the more famous shoeys that could be blamed for making the tradition spread like wildfire, Perth boy Ricciardo smashed a shoey in second place on the F1 podium after a victorious race and was soon joined by Scottish acting legend Gerard Butler, who followed suit. ‘It’s an Australian thing’ Ricciardo was heard to say to reporters. ‘Nuff said. 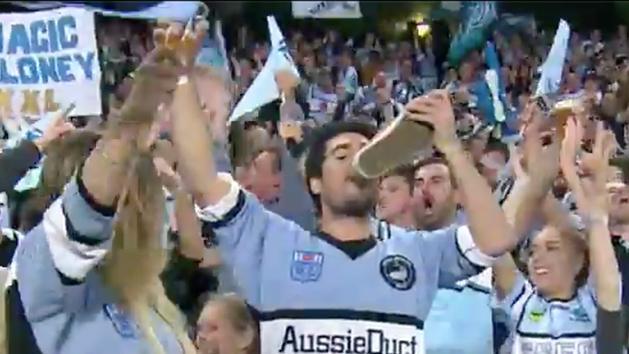 As the camera panned across a sea of light-blue-garbed sports fans applauding Cronulla’s win at the NRL grand final this year, a lonely figure stuck out in the crowd with his shoe in one hand and a beer in the other. Bloody legend.

You know you’ve got a proper tradition when it sparks an international incident. Nannas may have looked on clutching their pearls, saying things like ‘I blame the parents’ and ‘wouldn’t have happened in my day’, but nobody else cared; these scallywags instantly went down in history as true blue representatives of our wide brown land, and there they shall remain.

Another motocross hellraiser who knows that lapping beer from your footwear is a better way to celebrate than a victory lap. Beauty.

The photo says it all. Boozed up Aussie on tour, all the grace of a baby elephant on stilts, covered in beer and glory, basking in his own excellence while onlookers don’t seem to care that he’s the most beautiful girl in the room. Could well be our next prime minister if we can track him down.

This one is the most confusing, partly because a prosthetic limb doesn’t sound like the most appealing of drinking vessels (well, less so than a shoe), but mostly because the fella sinking tins from the top of it clearly has all his appendages intact. Where he got the leg remains a mystery, but he’s gone down in the books as one of the greats. 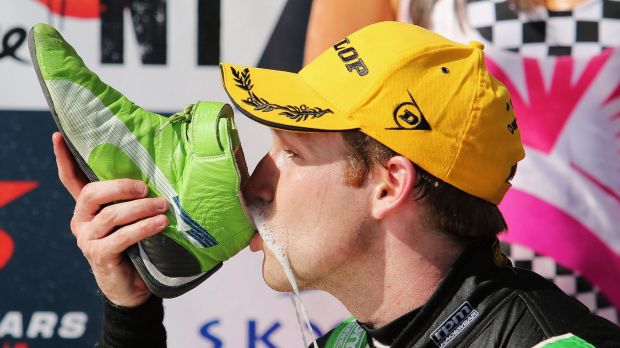 One of the first to make the shoey a motorsport tradition, Davey boy started swilling from his racing boots after his V8 Supercars wins, although has eased up on it lately, already claiming it’s ‘too predictable’. Carn ya David start doing us proud again.

Egged on by fellow Aussie Daniel Ricciardo, the former F1 champ winced as he begrudgingly downed a mouthful of bubbles from Danny boy’s sweaty, fetid racing shoe post-race. He later confessed it was less than pleasant, but we all know that Mark wouldn’t leave another Aussie boy hanging in front of such a large crowd, and for that, we salute him.

As Australia’s latest hope for MotoGP glory, the young and plucky Jack Miller’s recent Dutch TT victory wouldn’t have felt right unless he’d sunk some piss from his motorcycle boots on the podium. Thank christ he did.

Reality TV star Brody Jenner took to YouTube to show off his boozehound prowess (and his innate ability to piss off the DJ) by enjoying the subtle, delicate undertones of what appears to be an icy cold lager, guzzled out of his shoes, in celebration of his time down under.

Not to be outdone by rising talent, The Doctor himself sank a shoey on camera to remind us all who the big man on the MotoGP campus really is. While he might not be an antipodean, the more people out there drinking shoeys the closer we’ll be to world peace, and we’re okay with that.

It wouldn’t be a complete list without the video that started it all. Enjoy.

And: The Most Australian Thing That’s Ever Happened.

Shannon Noll drinking a shoey of beer out of his RM Williams is more Aussie than Dame Edna scoffing down a Mrs Mac’s rat coffin whilst quaffing Penfold’s on a QANTAS flight to Longreach in a pair of pluggers and one of those stupid hats with corks around them. Fact.

UPDATE: The Classiest Shoey Ever

In the most entertaining podium to date, our boy Danny offered the inimitable Sir Patrick Stewart (who needed no convincing) a delicious sip of the good stuff from his other shoe. The Star Trek and X-Men star gulped down a healthy dose of victory-fizz and seemed happy to do it.