The moment we’ve been waiting for ever since we found out how weird the format was is here: the immunity challenge. Lynton, Callum and Ginger Sarah in a brutal three-way battle to save themselves from the horrors of elimination, which based on proceedings thus far will take place sometime in June.

We begin with slow-motion footage of the trio voicing affirmations of their desire to win. It seems fairly early in the season for this: the stakes aren’t all that high, and they come off as drama queens. Stop making such a big deal of a first-week immunity challenge, guys.

Slow mournful music alerts us to the sobering reality: someone has died in the Masterchef kitchen. Wait, no, it was just a really bad choice of music. Actually everything’s fine. The three contestants enter HQ, where Melissa asks them, “How good is Gordon Ramsay Week?” None of them answer: they just clap, showing that it’s not just the audience that never listens to Melissa.

Gordon, knowing he only has one more day in this dump before he gets to go home, is in a good mood. The challenge for the trio today will be to keep up with him: he will cook in front of them and they have to follow his lead, finishing ten seconds after he does. It sounds difficult, but you have to remember the three contestants have been cooking all week: Gordon Ramsay hasn’t cooked anything himself since 2004.

The people on the balcony laugh mockingly at the difficulty of the challenge, but I don’t know why: those losers have already missed out on immunity.

“Let me tell you something really important,” says Gordon, but doesn’t. In fact he says something slightly incoherent. He then mentions souffle. He then says they’re not making souffle. Gordon may have been drinking.

The challenge begins. Ginger Sarah feels confident because she knows from past experience that she possesses the ability to hear words that another person says. Little does she know that Callum and Lynton also have ears, making it an even field.

Gordon is cooking a potato-crusted Murray cod. If the contestants are smart, they’ll make the same thing. Their first obstacle is getting the same ingredients as him. Lynton tells himself to trust his instincts, having misunderstood the challenge: he’s supposed to just copy what Gordon does.

They fillet the fish in much the same way as a child who will one day become a serial killer. “Watching Gordon Ramsay fillet a fish is amazing,” says Courtney, exaggerating to a hilarious degree. After filleting the fish, it is time to trim the fish, so that the large piece of fish becomes a tiny bit of fish suitable for sale in a fancy fine dining rip-off joint.

“Filleting fish under this kind of pressure is extremely hard,” says Dani, as the producers’ belief that we are interested in the spectators’ views on fish-filleting persists against all evidence.

Sarah is struggling to fillet her fish. “I know how to fillet a fish,” she says to herself, but she clearly doesn’t believe her. As the others pour macadamia nuts into a blender in preparation for some ungodly ritual, she keeps hacking away in the hope that by mutilating the cod she might purify her soul.

After a quick ad break we return to see the exact same scene we saw before the break, as Masterchef is nothing if not convinced that its entire audience suffers from severe short-term memory loss.

On the balcony Jock tells Andy that Sarah is in trouble. Andy already knew this. Beside them, Emelia gazes down judgmentally. Emelia wouldn’t be fucking up her cod like this. Emelia knows how to show a fish who’s boss.

“Don’t waste time with the fish,” Gordon tells Sarah, sending kind of mixed messages given that earlier he strongly implied that the fish was fairly central to the dish. But apparently the fish doesn’t matter at all, so Sarah moves onto falling behind on the next bit.

The contestants follow Gordon in blending their nuts. He tells them to keep their blenders slow. Callum blends fast. Jock yells at Callum to listen. Callum did not get where he is by listening to people. He lives fast, he blends fast. Lynton, on the other hand, is listening intently, while Sarah has regressed to childhood.

Sarah becomes emotional as she flashes back to home life with her son, who she is desperate to not have to return to. No time for reminiscing on the terrors of home life now though: it’s zucchini time! “Lynton is doing pretty well on this challenge,” says Tessa, violating the fundamental rule of drama: show, don’t tell.

It’s time for fennel, which is something that is rarely said and never accurate. Callum is scrambling to keep up. “There’s no time for perfection,” he says, echoing the philosophy with which he chose his haircut.

Gordon’s vegetables are starting to sweat, and who can blame them? He orders the contestants to put fish stock in, to try to cover up the taste of vegetables. “Get it in there, Callum,” yells Melissa, lost in a fantasy world.

Gordon begins sharpening his knife, a wild look in his eyes. He longs for a fresh victim. He does something odd with clams. “This is a huge day,” says Dani. “People would give their gold tooth to be here and watch Gordon cook in the flesh.” This bizarre assertion is not interrogated by the producers, and we are left in the dark as to Dani’s beliefs on the prevalence in society of gold teeth.

Down on the floor, Gordon orders the contestants to set fire to their dishes, which they do. Callum has caught up, but Lynton is looking, in Emelia’s words, “as cool as a cucumber”, and twice as sexy.

Having burnt their clams, it is now time to cut potatoes, the one thing Sarah never learnt to do. Lynton can’t comprehend where the potatoes are going: which part of a potato-crusted Murray cod could possibly include potatoes?

“Make sure it’s exactly the same as his,” Tessa calls to Lynton, who wonders where he would be without having the fucking obvious shouted at him by losers throughout this process.

Gordon is whisking egg whites just for the hell of it, while Callum rambles around the kitchen looking for a whisk, like the hardened professional chef he is. The egg white goes onto the fish, and the potato slices go onto the egg white, and thus is the cod scaled. Gordon runs around to the contestants showing them his fish to emphasise their woeful inferiority. Callum notes that the potato is not superglued onto the fish, which he thinks makes it more difficult to cook, but frankly the addition of superglue to the recipe would, at the very least, detract from the intended flavour.

The fish goes into the pan. “We’re only turning this fish once,” says Gordon, knowing the natural resistance of Murray cod to ideological capture makes anything more a pipe dream. Sarah flips her fish. The audience is astonished, as Gordon hasn’t flipped his yet and nobody knew Sarah had basic motor skills.

Somehow they’re still not done. They need to do things with butter and thyme and also there’s the minestrone which I thought they’d given up on as a pointless exercise but apparently no we’re still going ahead with minestrone. Lynton’s minestrone is not sizzling as much as the others’, and he weeps for what might have been.

It is time to plate up. “I don’t know what this plate’s gonna look like, so I need to see what Gordon does before I do it,” says Callum, having left it quite late to grasp the entire point of this task. Gordon arranges his elements in an unnecessarily finicky manner. The contestants desperately try to force their clumsy, Cro-Magnon fingers to copy his delicate movements. “It looks great, Callum,” calls Reece, battling valiantly against the fact he’s not really on the show.

Lynton is proud of his effort. “And also Callum and Sarah’s,” he says, not making much sense. “I feel like I’ve run a marathon,” says Callum, grossly disrespecting the sacrifices made by elite athletes. Sarah just quietly drinks wine from a saucepan like a tramp.

The judges sit at the judging table and talk bollocks for a bit, and then they taste the dishes. And then talk some more bollocks.

Gordon likes Callum’s dish. Jock thinks his macadamias are more acidic than Gordon’s, which Gordon takes as a personal insult. Andy finds a bone in his fish, which means Callum must now be chemically castrated as per his contract.

Sarah brings in her dish, featuring the rich flavour of desperation. Gordon finds the dish as scatty as he finds Sarah herself. There’s not enough colour on the top. Melissa commends Sarah for finishing in time, having decided that the bar really should be set that low. The puree is good and the vegetables are good, but the fish is overcooked, but then, as Gordon told Sarah earlier on: don’t waste time with the fish.

Lynton walks in looking handsome and delicious, but unfortunately his dish lacks Callum’s finesse, according to Melissa who has apparently forgotten that Callum showed so much finesse he left a bone in. Andy tells the other judges that Lynton’s pan wasn’t hot enough, the bloody little dobber. Gordon says the vegetables need more cooking, but it’s his fault for including vegetables in the dish in the first place. No vegetables means no undercooked vegetables, genius.

Finally — and seriously, it feels like hours since the cooking finished — the judges bring the cooks out to tell them their failings. Callum wins because the judges decided that even though there was a bone, it was in Andy’s portion and they don’t care whether Andy lives or dies. So Callum gets immunity for the elimination, while Lynton and Sarah have wasted an entire week.

Before Gordon leaves the show and immediately forgets he was ever there, he brings in a parting gift: a small box that he insists not be opened till Sunday night, when they will discover the still-beating heart of Marco Pierre White.

Tune in on Sunday, when the judges face the terrifying prospect of carrying the show without Gordon, and one hopeful cook’s income stream is cruelly abbreviated.

Support independent recapping via Ben’s Patreon. Listen to the Washing Up podcast for more Masterchef insights. 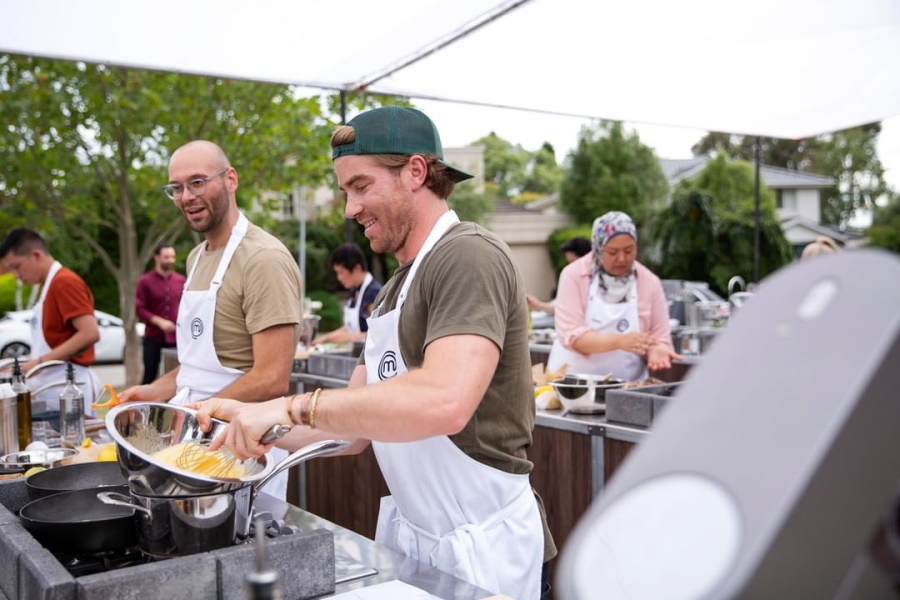 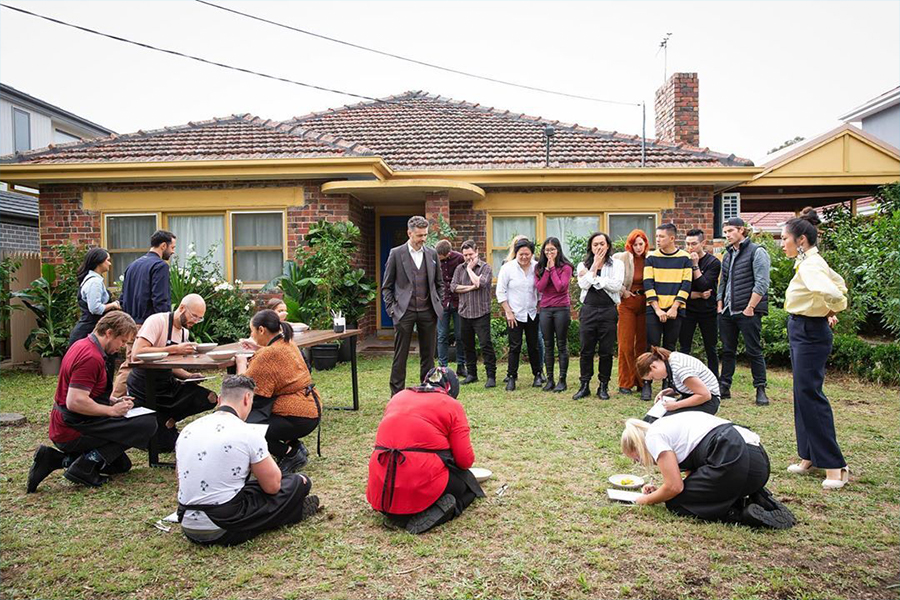