It’s early in the morning on an unseasonably cool summer day, but Winston McCall has already shed layers. Sitting shirtless in his living room, bathed in thick Byron Bay sunlight, the Parkway Drive frontman appears almost ethereal in nature. His presence is calm and his demeanour characteristically charming – it’s virtually impossible to believe the placid man plonked so cooly on the couch in front of me has just spent the last two months tearing stages apart on a whirlwind tour of Europe and the United Kingdom. The opportunity to ponder is shortlived, however, and McCall breaks the silence with a fitting acknowledgement.

Understatement of the year. From the moment Darker Still, Parkway Drive’s seventh studio album and first in more than four years hit shelves back in September, the five-man machine has been in full force. A lengthy tour supported by UK stalwarts While She Sleeps bled into a brutal cross-country expedition through Europe that left audiences stunned and fans re-energised. It had come at the perfect time.

After a two-year hiatus that threatened to put the music industry in an eternal chokehold, Darker Still emerged as a resounding triumph for McCall and co., debuting at No.1 on the ARIA music charts, the third successive Parkway Drive album to do so. But while billboard success was nothing new for the Byron Bay metalcore giants, this one felt different. Just five months earlier, the band had been on the brink of a crisis. Years of relentless touring, coupled with the lingering impacts of the global pandemic had caused fractures within Parkway Drive. Try as they might, the band was starting to feel less like a family and more like a job. In April, on the eve of a monster North American tour with Hatebreed, The Black Dahlia Murder, and Stick to Your Guns, it all came to a head. The group pulled out of the tour and just a few short weeks later announced that for the sake of their mental health, Parkway Drive would be taking a break from activity.

“It’s a collaboration. This band is a collaboration – It’s the best, most perfect word I could use to describe it. But when you’re collaborating with people who you really love and you’re not really communicating well with, there’s a lot that comes with that, which is not necessarily positive,” McCall says.

The news sent shockwaves around the Aussie music scene, prompting an outpouring of support for the band members. In a way, it seemed entirely fitting – Parkway had always been a champion of the underground. The ‘little band that could’ was responsible for challenging the global perception of heavy music and going where few others had gone before, fans just never expected that the next frontier would be championing mental health.

But night is darkest just before the dawn and it wasn’t long before teasers for Darker Still began circulating on social media. By the time the first single ‘Glitch’ was unveiled, the message was clear. The new album wasn’t going to shy away from the internal battles, both within the band and inside McCall. 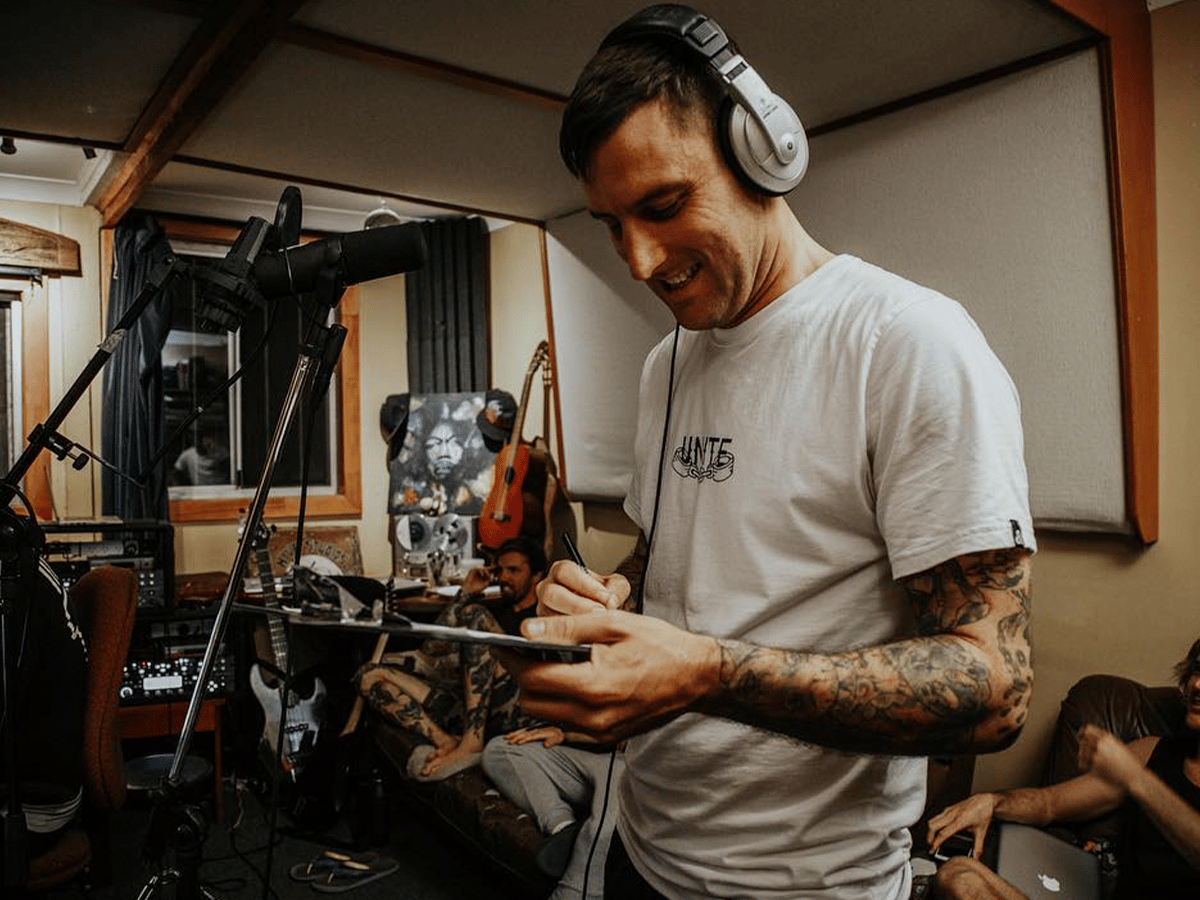 “What you create from that bleeds out. It’s an expression. It’s an expression of the dynamic that’s going on,” McCall says. “But I love this one. I’m really proud of the work that went into it. It was a very interesting time to write a record, and it definitely stands as a record that I don’t think we could have made at any other time, simply because of the very unique circumstances that COVID forced upon us.

“There’s always something that we put into an album, be it small or large, that you lean into, which is uncomfortable. But if you do that enough and it no longer feels uncomfortable, it feels kind of standard. So then you push yourself again into another space. This is definitely one where the palette got expanded in a big direction.” 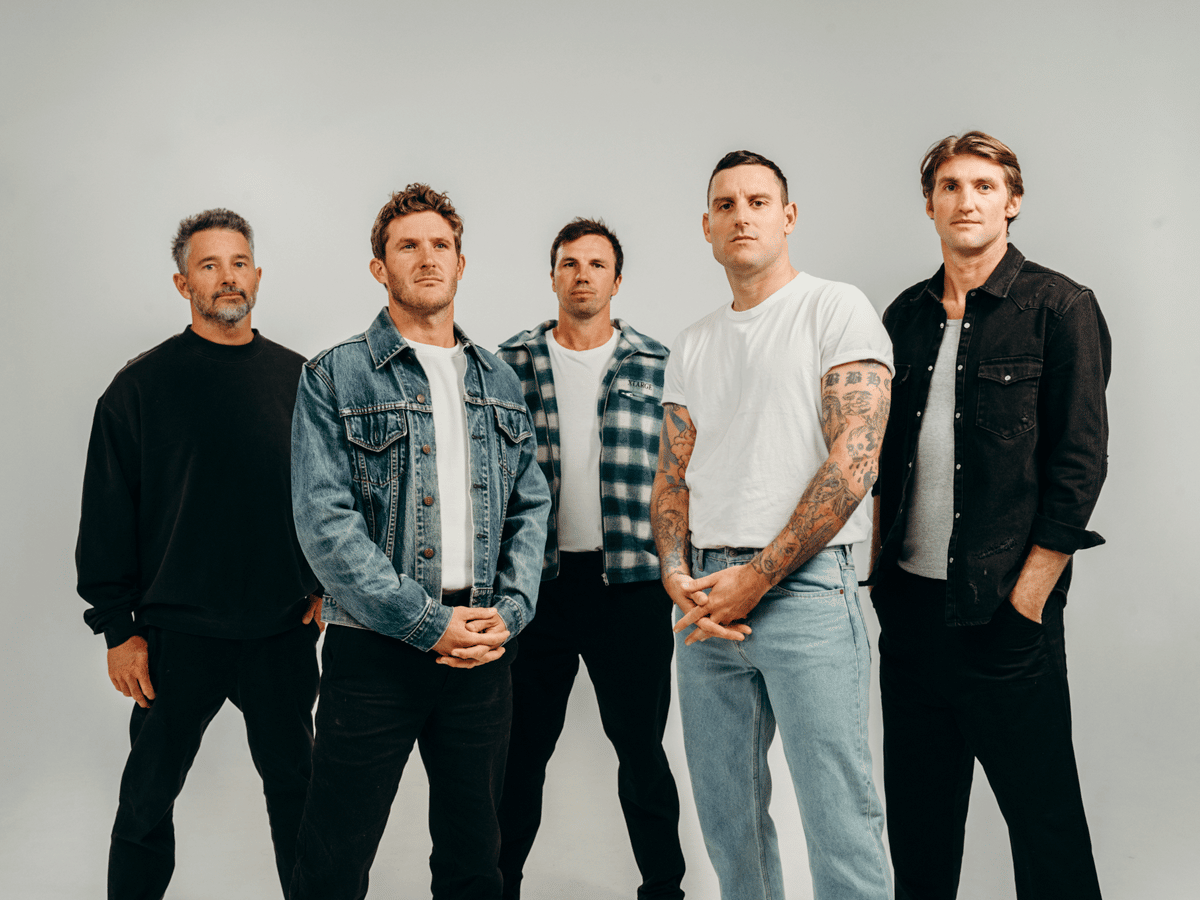 The gamble certainly paid off, not simply in terms of ARIA recognition either. The response from the wider music community has been enormous, with artists across the board lauding the band for their bravely open and honest artwork.

“There are obviously friends in the music industry who relate very directly to what we put out, but there was more this time. So many people from outside of that world who have never understood what we do, have found it resonated,” McCall explains. “You really don’t know if people are going to understand it and if it will relate, but the fact that it’s hit so well, it’s been really cool. And by hit I mean just people being able to go, “Oh, I’m not alone in this. I can see other people. This affects people in every walk of life.'”

As the Aussie music legend explains, it was important for the band to not shy away from their struggles. The vulnerability may have been daunting to begin with, but their honesty led to connection and slowly, the layers were peeled back.

“We’ve seen the worst of the situation and if we can do something positive by documenting an example of tools for modern life, especially for men in the country, then let’s take that chance.”

“That’s the really awesome thing about everything that we’ve gone through as a band…We’ve done a lot of work reconnecting over the last few months. We’re better mates now than we ever have been. After 20 years, you can go through some crazy stuff and it’s nice to know that we’ve been able to pull through together and not let it just rust away.”

Looking at McCall, his posture relaxed and cheeky smile spread firmly across his face, you can’t but think the time out from the exhaustive touring schedule has done a world of good. Even now, the Parkway Drive frontman is enjoying a brief respite from music commitments before the upcoming Knotfest shows with Slipknot and Megadeath kick-off in March. It’s a rare opportunity for the vocalist to take a step back and enjoy music for pleasure, rather than purpose. And as anyone who has seen the band’s 2009 documentary would know, there’s no better place for McCall to do that than in the water. 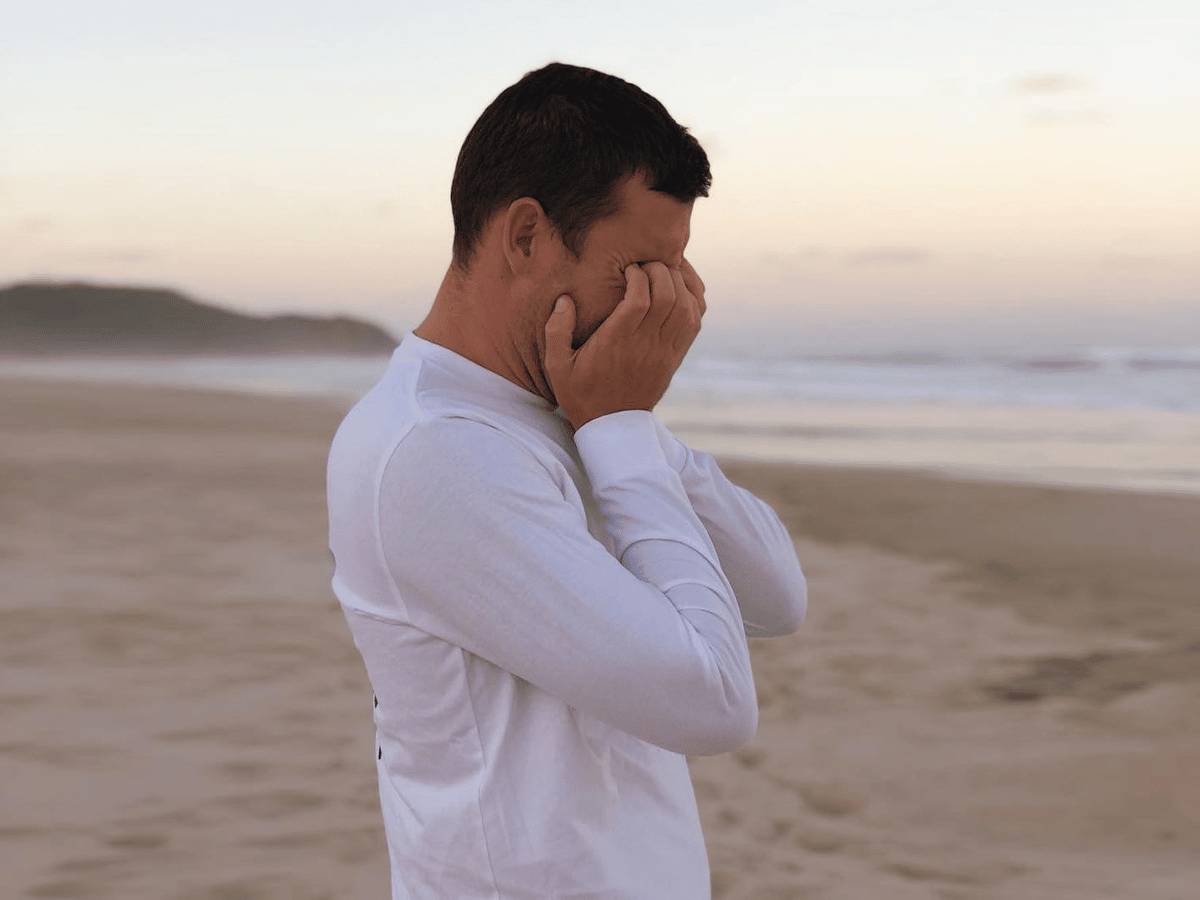 A surf tragic, McCall’s connection to the ocean sees him spend most of his downtime searching for waves, with no soundtrack but the songs stuck in his head. And for the first time, we finally know what they are. The Aussie music legend has teamed up with Apple Music for a curated playlist of tunes that make up the soundtrack to his summer escape.

“I tried to curate something that I found myself driving to a lot during COVID on my way to the surf…You’re very conscious when you go for a surf and all you can hear is just the ocean, the sound of exploding water and that’s it,” he tells me. “It’s not like there’s traffic or anything, just music that pops into your head. It’s there for a reason and these are all songs that have some kind of hook, which becomes an incessant mantra that you can’t escape. If you go for a three-hour surf and one of those is in your head, it ain’t leaving you for that full three hours.”

Available on the platform as part of the music streaming service’s Summertime Sounds series, McCall’s Surfer Goth Playlist is a perfect encapsulation of a man who walks the edge between two worlds. Designed for stormy drives down the coast on his way to the surf, the playlist is an eclectic collection of his personal influences, from The Beach Boys and The Rolling Stones, all the way through to Rammstein and Slipknot. It’s varied if nothing else, and I can’t help but return to my original thought about the Parkway Drive frontman’s double life.

In a sense, McCall is a lot like the ocean he’s become so comfortable with. On the surface, he appears calm and placid, but beneath it, there’s a brutality swirling. It swells and grows before emerging with thunderous passion, boring its full force down upon the object of its attack, which thankfully for us, is usually a Shure SM58 microphone.

“It felt natural to me to do it – To be able to blend the two worlds together, that’s who I am, at the end of the day.”

Winston McCall and Parkway Drive’s Surfer Goth Playlist is available to listen to on Apple Music or via the player below. 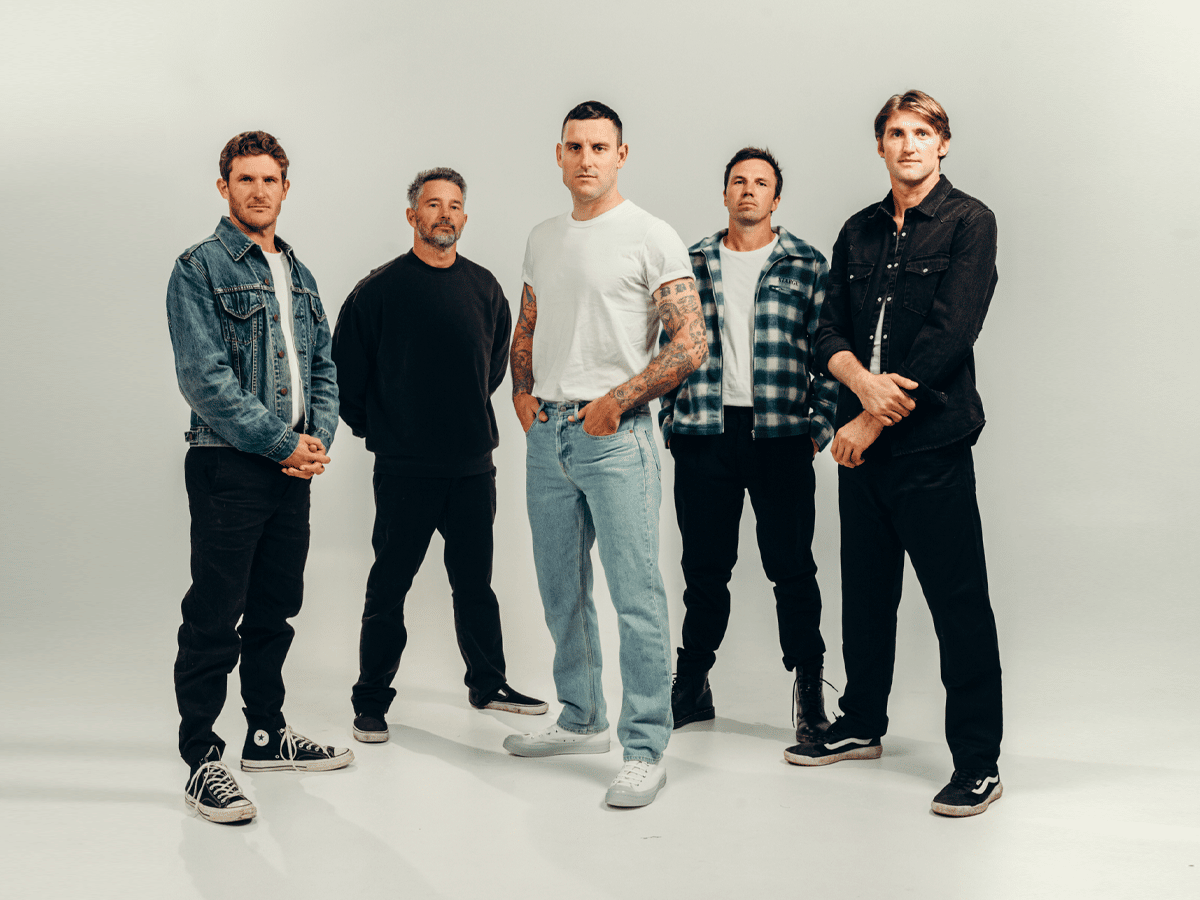 Drinks
Wine Headaches: Causes and How to Avoid Them
load more articles