TRENDING
Advice
10 Tips On How To Make Small Talk
Cars
SLRV’s 2-Story, 8-Wheel-Drive Overlanding RV Has it All
Travel
How to Turn 20 Days of Leave into 45 Days Off in 2020
Advice
How To Remove a Tattoo You Regret
Music
This Month In Music – January 2020

Welcome to Man of Many’s newest segment, where at the end of every month we round up the coolest watches that our fellow watch-wearing celebrities have been seen wearing while out and about.

From Cristiano Ronaldo’s million-dollar-plus diamond-encrusted Breguet to Mark Wahlberg’s rainbow-diamond Rolex all the way to Rafael Nadal’s spectacular and super ostentatious Richard Mille that’s light as a feather and can withstand more G-forces than a fighter jet. 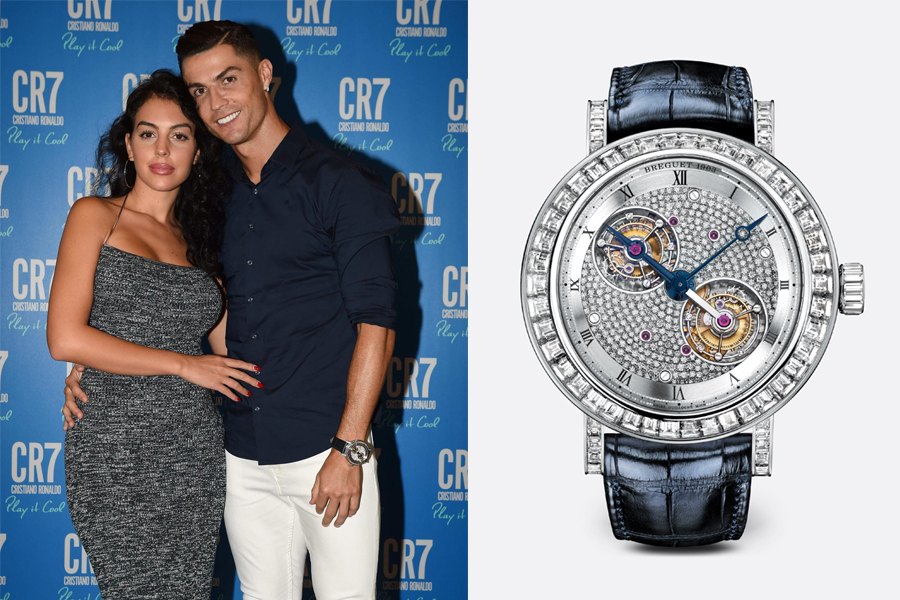 Football’s megastar is no stranger to super high end watches, and his iced out Breguet is certainly no exception. Measuring a whopping 50mm in diameter, the platinum case is adorned with 417 diamonds. Yep, you read that right, 417 individual flawless diamonds cover the bezel, case, crown and dial. Which would make this beast a hefty 309 grams. Priced at $802,000USD, the Breguet Classique Grande Complication Double Tourbillon 5349PT is the perfect accompaniment for one of football’s most ostentatious stars. 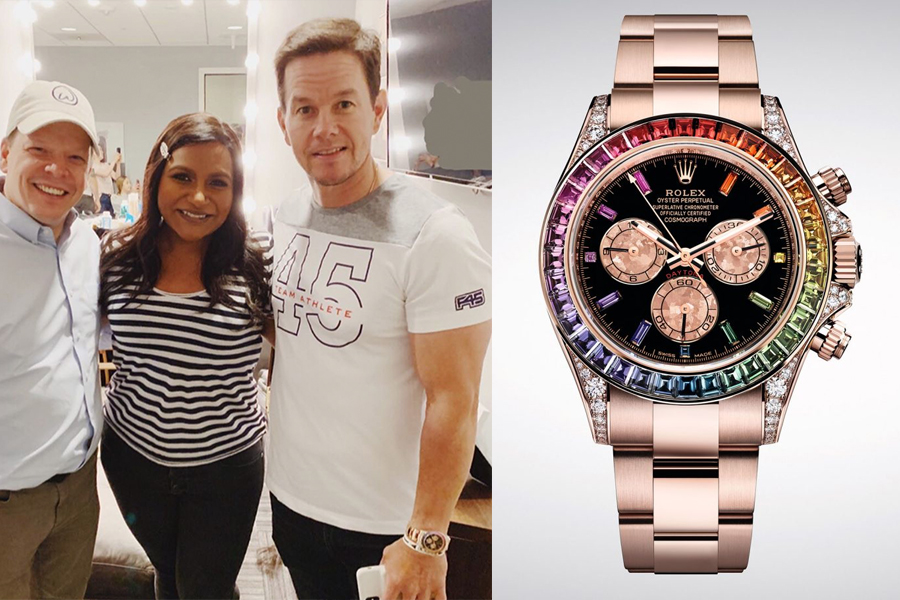 Extravagant, loud and immediately recognisable, Rolex’s rainbow diamond-encrusted Everose gold Daytona is considered by many as the epitome of the manufacture’s haute horlogerie cross bling department. And no stranger to incredibly high end watchmaking is Hollywood superstar, Mark Wahlberg. The Rolex Daytona Rainbow features 36 baguette-cut sapphires along the bezel, 11 baguette-cut rainbow-coloured sapphires hour markers (with matching colours as per its position on the dial in relation to the colour gradation on the bezel), along with 56 brilliant-cut diamonds set in the lugs and crown guards. All of this bling sits on the beautiful Everose alloy, owned and patented by Rolex. Priced at $96,900USD, the Rolex Daytona Everose is anything but typical. 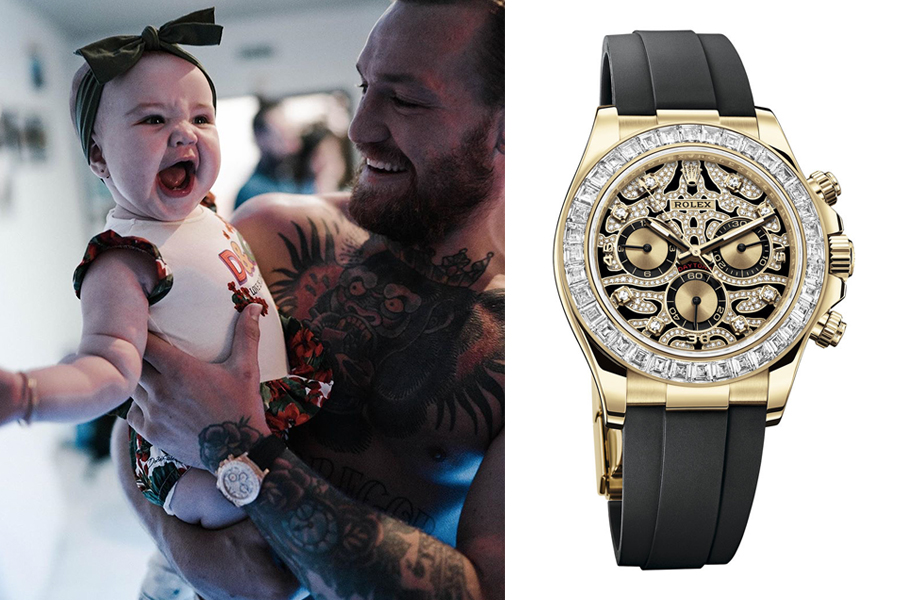 The Notorious One Packing a Punch with a Dazzling Daytona

Conor McGregor is no stranger to controversy. Nor is he one to shy away from setting trends, making fashion faux pas and marching to the beat of his own drum. Arguably one of the most polarising watches to come out of Rolex in recent times and seen here on the wrist of the UFC superstar’s wrist is the Rolex Daytona 116588 TBR. Featuring a hand-embroidered gold dial, the glamorous look of the 116588 TBR is further accentuated by the addition hundreds of diamonds on the dial, as well as baguette-cut diamonds on the bezel. Priced at 98,300CHF, the 116588 TBR does seem a well befitting watch for the luxury-loving McGregor. 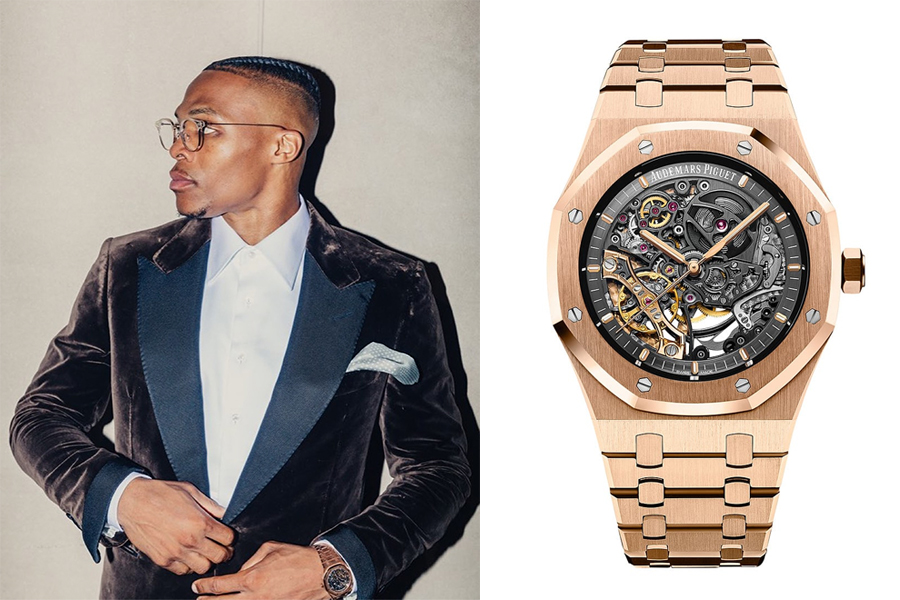 Prices for the once-upon-a-time $76,800USD 18k pink gold Audemars Piguet Double Balance Wheel Openworked have exploded since its release at SIHH in 2016, but for Houston Rocket’s point guard Russell Westbrook, it was a must have in his collection. The eight-time NBA All-Star and NBA Most Valuable Player recipient for the 2016-2017 season is pictured here pairing his pink gold Audemars Piguet Double Balance Wheel Openworked flawlessly with a suit from renowned designer, Tom Ford during the men’s designer fashion show at the New York Fashion Week. Complete stunner. The watch, I mean. 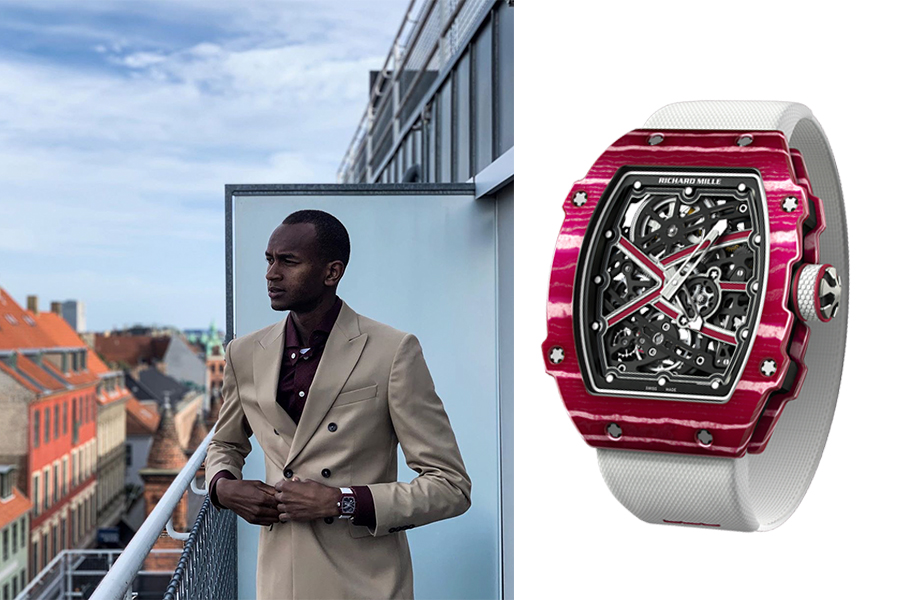 Qatari-born Mutaz Brashim is a renowned athlete, and the first (and thus far only man) in the world to have run the 100, 200 and 400m in less than 10, 20 and 45 seconds, respectively. He’s also the second man to have almost reached Sotomayor’s high jump record, jumping a personal record breaking 2.43m. Now, Richard Mille is no stranger to pairing insane watches with high performing athletes, and the RM. 67-02 is no exception to this trend. Richard Mille created a case crafted in carbon TPT and quartz and building a movement made predominantly out of grade 5 titanium, essentially engineering a watch that measured only 7.80mm in thickness and with a weight of a stupidly light 32 grams (including the strap). Priced at €134,000, the RM 67-02’s colour way also represents the Qatari flag. Perhaps one of the all-time tennis greats (sorry Nick Kyrgios…), Rafael Nadal is accustomed to wearing absurdly expensive watches on and off the court. The latest piece to get strapped to his wrist is the $725,000USD Richard Mille RM 27-03. Able to withstand shocks of up 10,000 Gs, the brightly coloured RM 27-03 is the perfect watch for Nadal to wear during one of his infamous tennis bouts. More than capable of handling the intensity of his matches (if you’ve yet to watch him, jump on YouTube — you’ll see what I mean), the RM 27-03 walks the walk and looks the absolute business. Richard Mille is the king of of matching technology with performance, and the RM 27-03 perfectly personifies the manufacture’s commitment to innovation.

Advice
10 Tips On How To Make Small Talk
Cars
SLRV’s 2-Story, 8-Wheel-Drive Overlanding RV Has it All
Travel
How to Turn 20 Days of Leave into 45 Days Off in 2020