Avant-Garde isn’t always a phrase you’d associate with perennial fan favourite TAG Heuer, but for Watches & Wonders 2022, the Swiss icon has charted a bold new course. Marking a brief departure from its traditionally sporty world, the watchmaker unveiled the TAG Heuer Carrera Plasma D’Avant Garde, a glitzy novelty that arrives with 11.7 carats of lab-grown diamonds and an eye-watering price tag to match. Feast your eyes on this new Watches & Wonders Guide 2022: Here’s What You Need to Know release, because you’ll probably never get the chance to see one in the flesh. 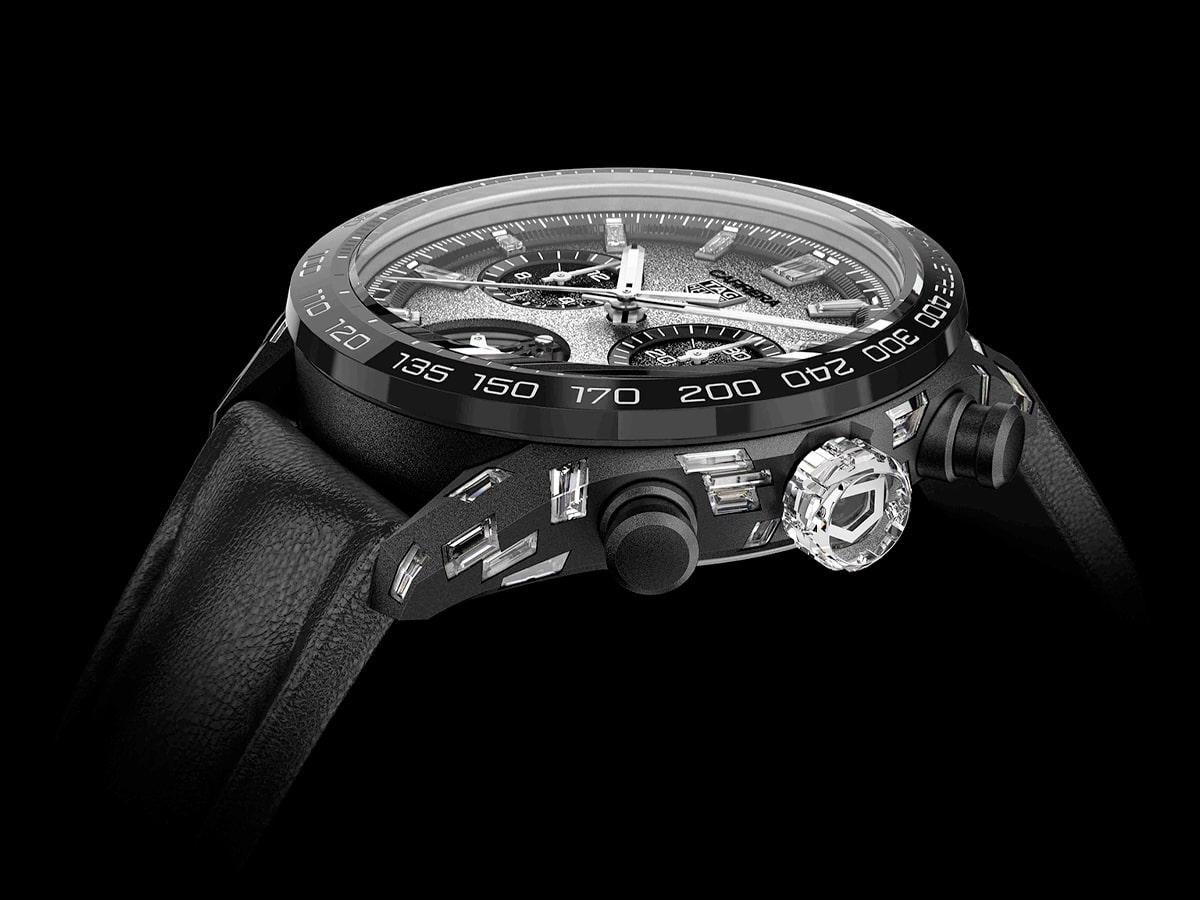 Looking at the new Carrera Plasma from the outside, it’s hard to deny the mastery at work. Arriving in a 44mm lightweight case derived from sandblasted black anodised aluminium, the new timepiece is a sleek little number with a decidedly darker scope. Adorning the immaculate piece are 48 lab-grown diamonds, which have been set into the case totalling a remarkable 4.8 carats. What immediately sticks out is how much they don’t (for lack of a better phrase) stick out.

The integrated nature of the setting allows the diamonds to flow naturally, appearing as a fluid part of the case rather than a simple addition post-construction, a theme that continues in outrageous fashion with the crown. For this element, TAG Heuer has completely thrown out the rule book, foregoing traditional watchmaking practice and instead utilising a single 2.5-carat piece of diamond. According to Edouard Mignon, chief innovation officer at TAG Heuer & LVMH Watches & Jewelry Division, the use of lab-grown diamonds allowed the brand to craft a truly unique timepiece that speaks to the notion of avant-garde design. “Chemical vapour deposition (CVD) technology, which we refer to as ‘Diamant d’Avant-Garde’ at TAG Heuer, enables us to explore the versatility of carbon in the form of lab-grown diamonds – to create a stunning timepiece where diamonds are used in very unique shapes and textures,” Mignon said. “Lab-grown diamonds allow us to innovate and experiment with this exceptional material, and this opens up a new realm of possibilities for designers, watchmakers and engineers.”

A truly joint venture, TAG Heuer specifically turned to diamond design start-up Capsoul for a spectacular crown that has been crafted entirely out of diamond, visible at 3 o’clock. Further to that, the brand confirmed that the two pushers on each side of the crown have been embellished with a black DLC coating, adding to the watch’s refined matte touch and in direct contrast to the brightness of the diamond. 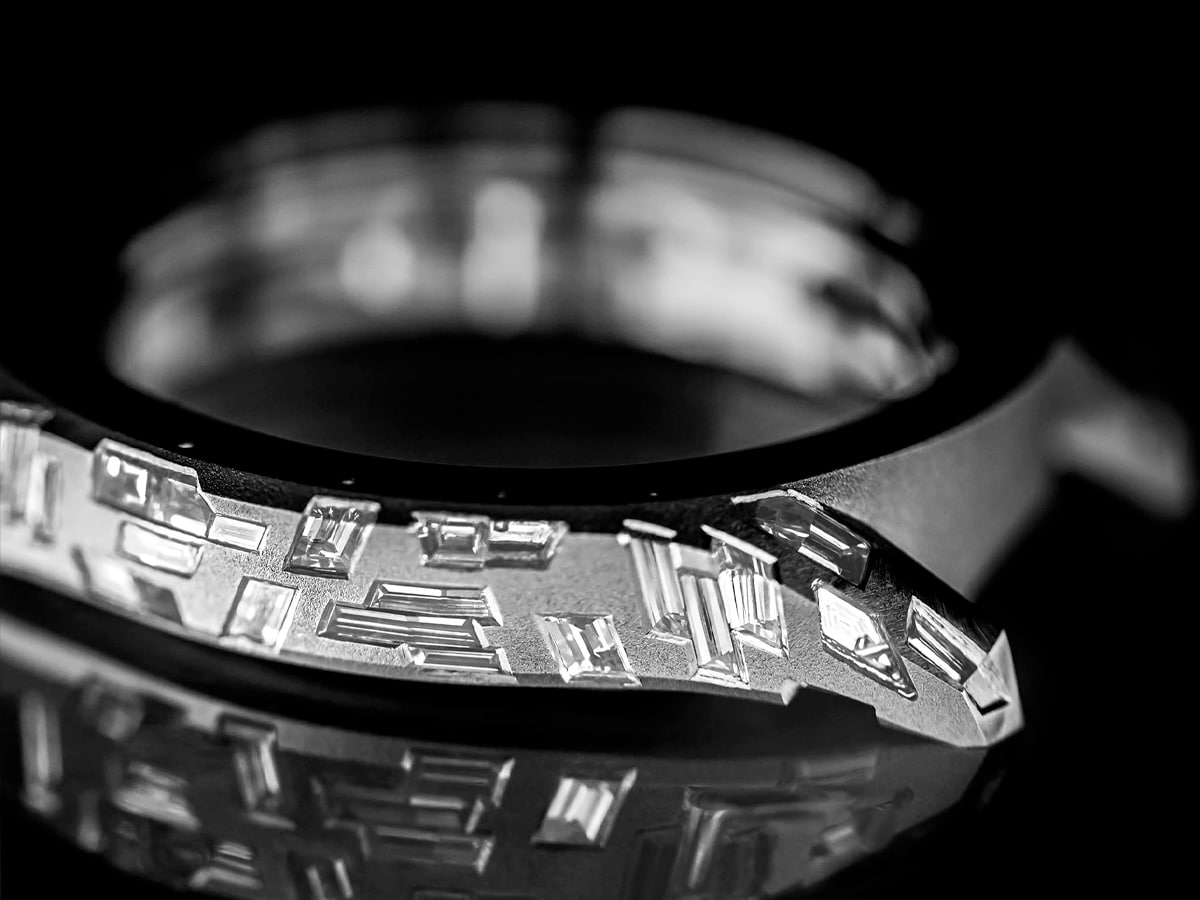 In a sense, it almost feels like TAG Heuer has taken the avant-garde approach too far, dazzling fans with diamonds on almost every surface and naturally, the dial doesn’t miss out. At 3 o’clock and 9 o’clock, the minute chronograph counter and the chronograph hours counter feature a black polycrystalline diamond plate, highlighted by a polished rhodium-plated hand.

“Innovation and redefining frontiers is in our DNA,” TAG Heuer CEO Frédéric Arnault said. “With the introduction of the TAG Heuer Carrera Plasma, we want to expand the possible palette and designs for diamond watches and diamonds in general, and create a new and breathtaking vision of mastering carbon and diamond design as well as cutting-edge light effects.” 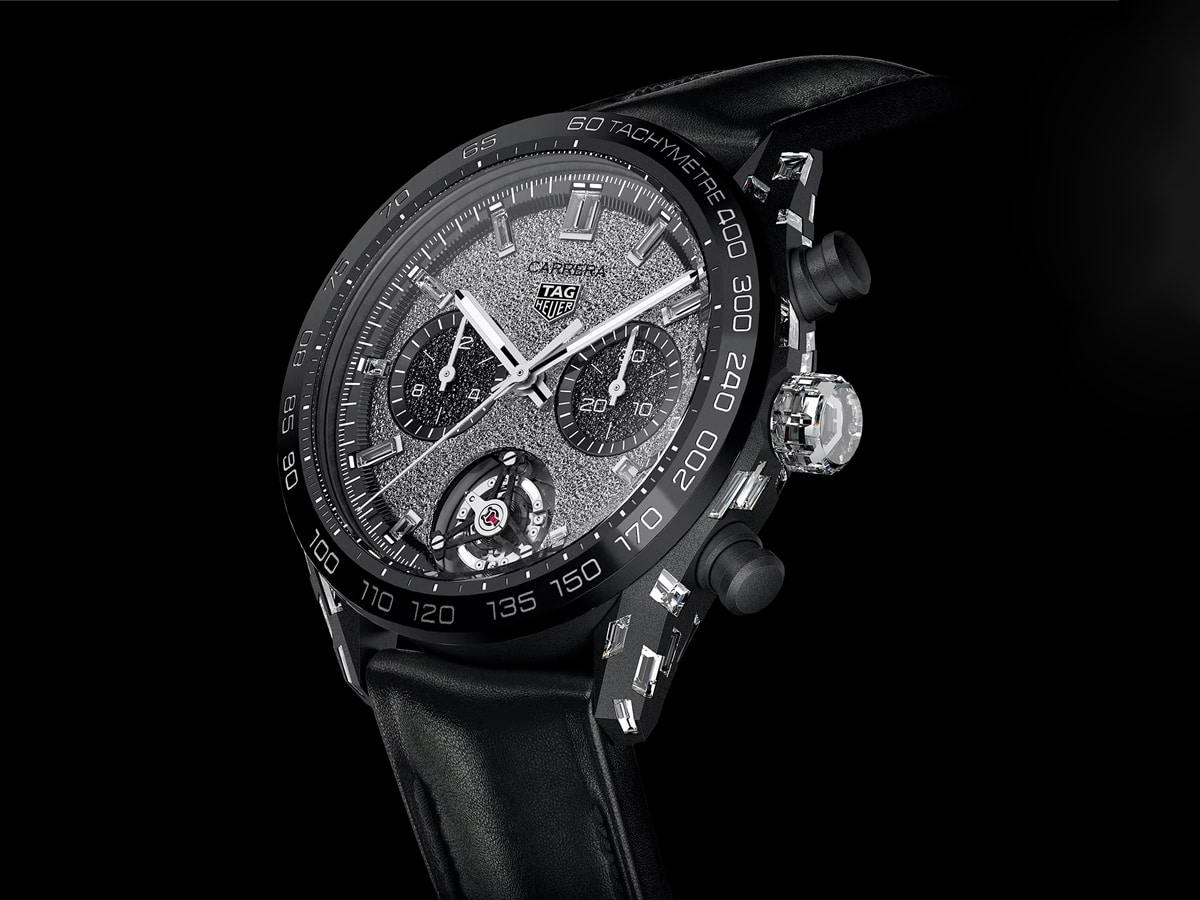 Importantly, the TAG Heuer Carrera Plasma isn’t just a pretty face. Powered by a specially developed version of the H02 Tourbillon Nanograph movement, the new 44mm timepiece boasts a 65-hour power reserve and an oscillating weight in the shape of the iconic TAG Heuer shield. The calibre itself carries the groundbreaking in-house carbon hairspring which TAG Heuer claims will deliver exceptional levels of anti-magnetism, shock resistance, stability across temperature ranges and refined geometry.

For TAG Heuer fans, the new Carrera Plasma might not be the most obvious continuation of the racing-inspired timepiece, but it does have a place. Venturing deeper into the world of super-premium luxury, TAG Heuer has managed to elevate an icon without tarnishing its reputation, a feat traditionally easier said than done. And of course, it won’t come cheap. While Arnault stopped short of revealing just how examples of the new timepiece would be made available, he did confirm that the new TAG Heuer Carrera Plasma will set you back a cool AUD$518,900. Better start saving those pennies now. 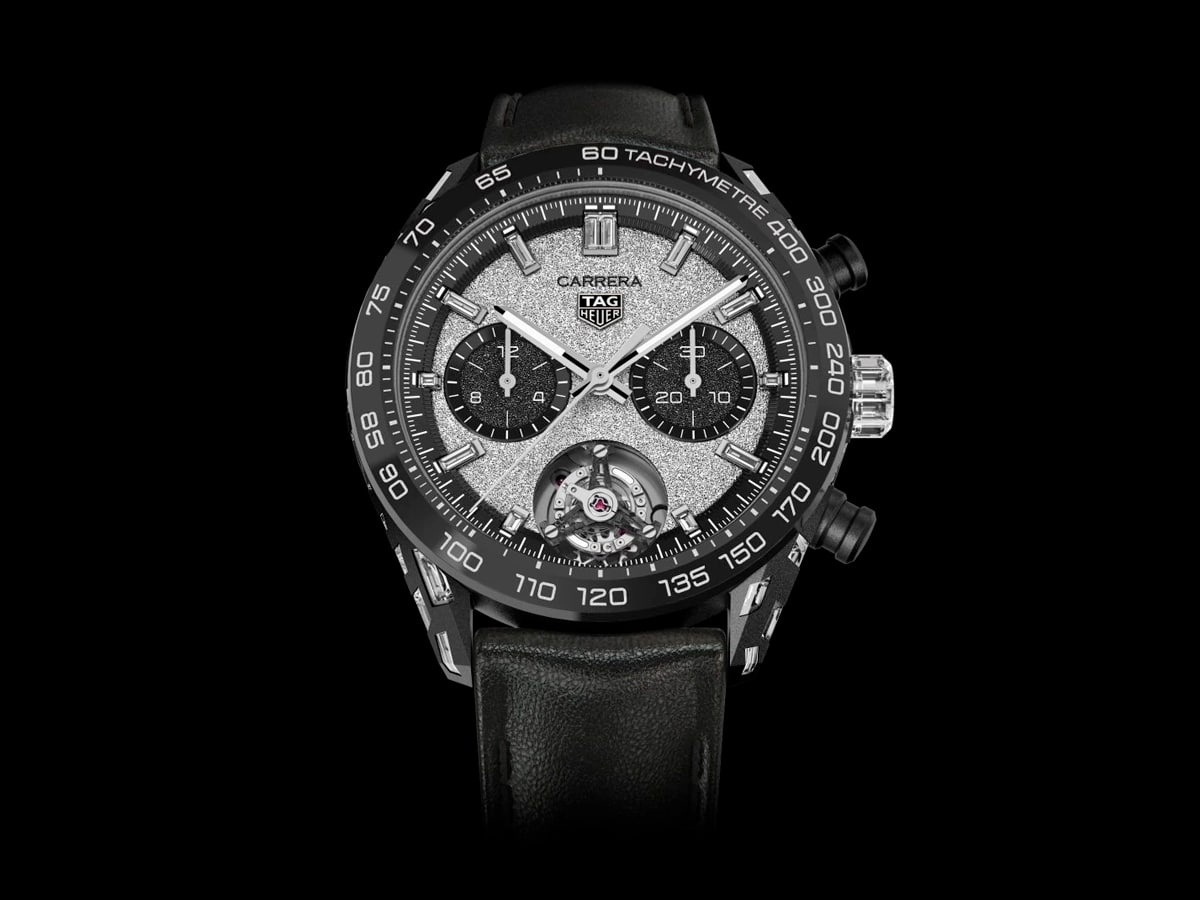 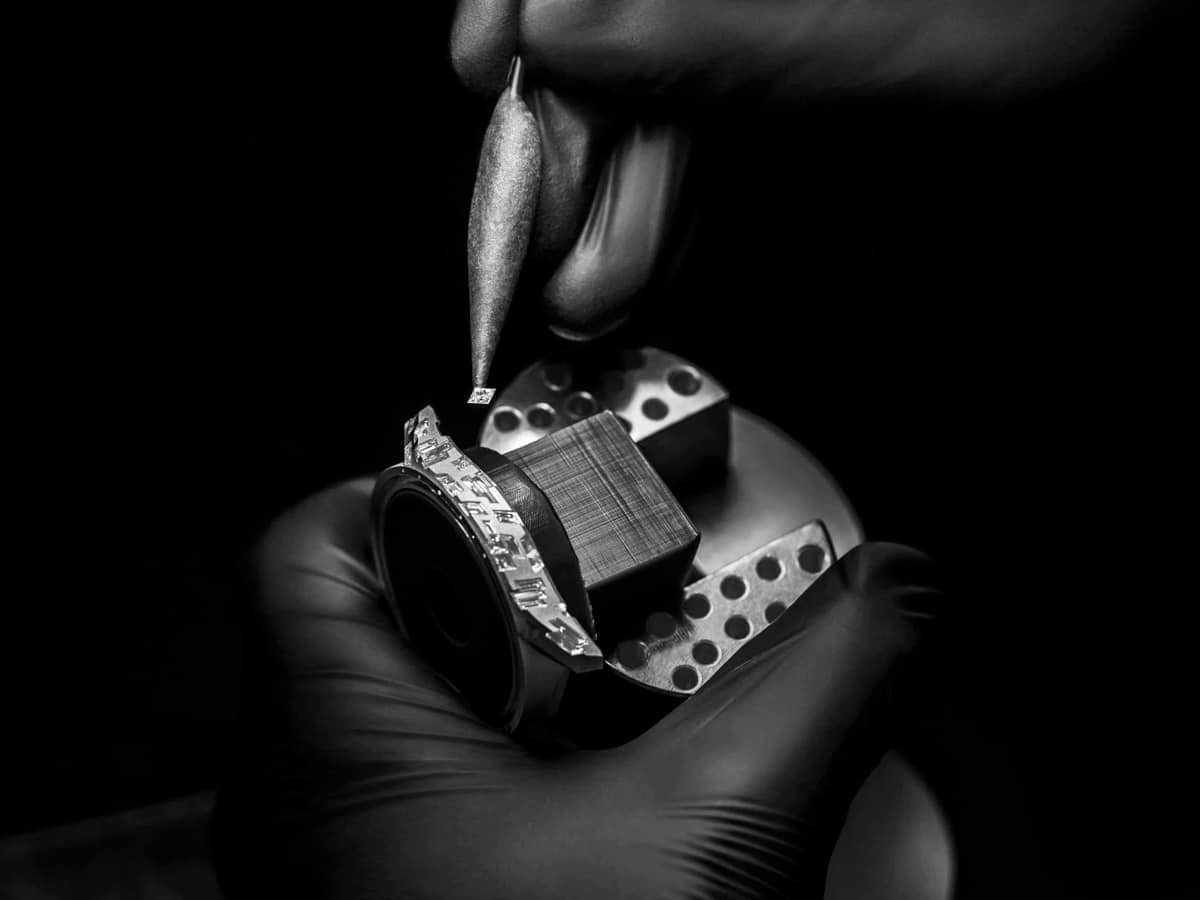