We’ll admit it, maybe an article on the nine best hangover cures should’ve been done before New Year’s Eve. We’ve all slipped into the spiral of binge drinking on a night out or at a party before, killing it at beer pong and taking shots of whatever’s available. But then the morning comes, and drinking doesn’t seem so fun anymore, as the room spins and your head aches. While there are many old wives’ tales for curing a hangover, these can be hit and miss. So, to save you from your next ‘mourning’ after, we bring you the nine best hangover cures that are backed by science. 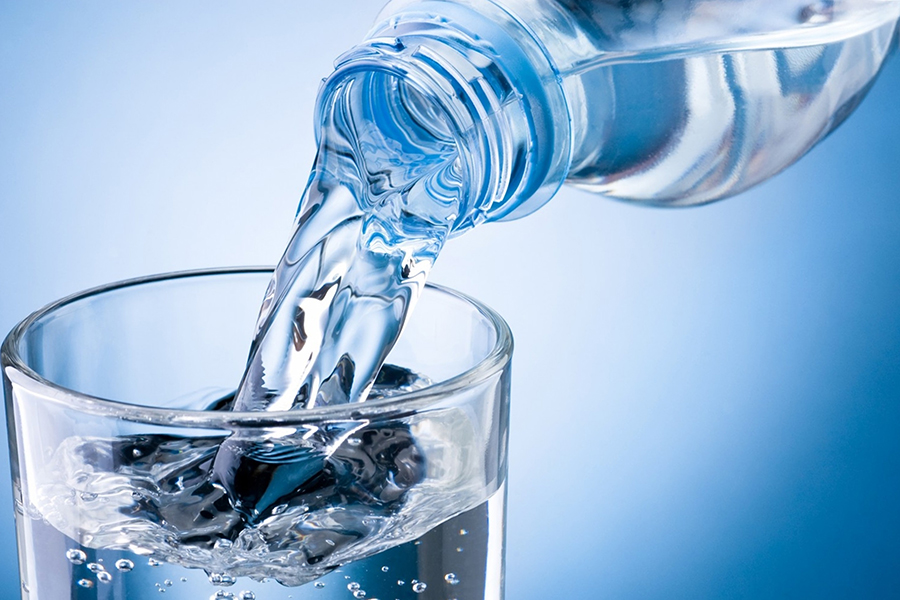 Starting our list of the best hangover cures is staying hydrated. No, we’re not suggesting you keep drinking alcohol. The hair-of-the-dog approach was never really a hangover cure, just a prolonging of the inevitable. When we suggest you stay hydrated, we mean with the good ol’ H2O (water, but you knew that).

Why it works: Drinking alcohol dehydrates the body, which is partly what makes us feel so groggy and disorientated the next morning. By replenishing those lost fluids, you’ll be helping your body to cleanse and process all the alcohol in your system. 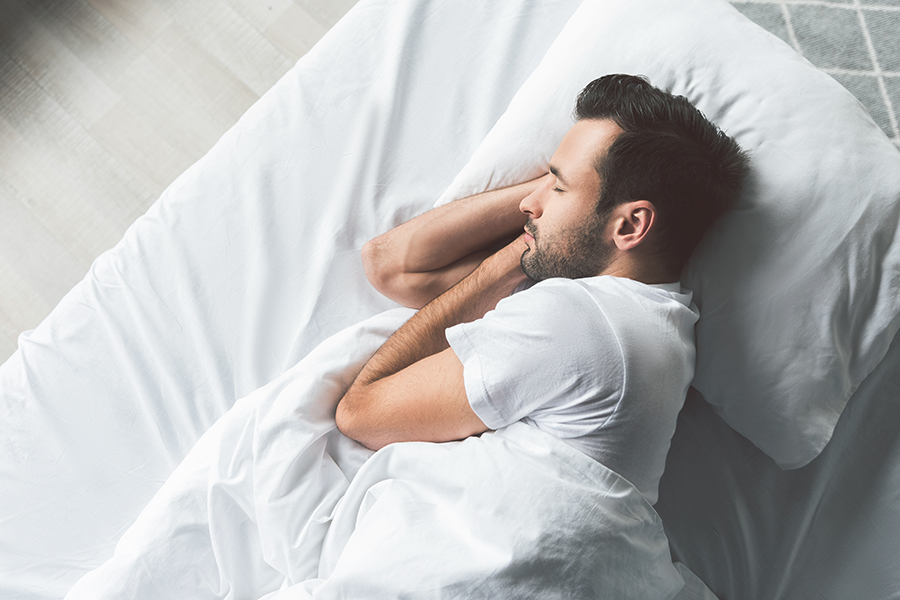 After a big night of taste-testing each and every cocktail on the menu, you deserve a sleep in. A lack of sleep can intensify your hangover, increasing fatigue and irritability. This means that getting a good night’s sleep after a night out can lessen the extent of your hangover. So, tell the boss you won’t be coming in before eleven, and take the morning to sleep it off. They’ll understand.

Why it works: Interesting enough, sleep won’t necessarily fix your hangover, however, not getting enough of it will significantly worsen your situation. Fatigue, headaches and irritability are all hangover symptoms that are exacerbated by a lack of sleep. Get some rest and you may find that hangover is far more bearable. 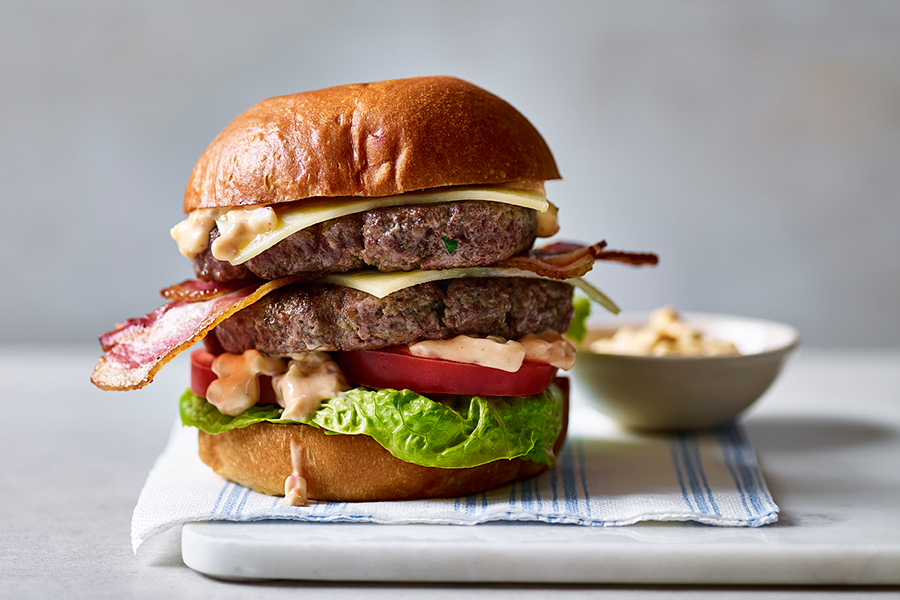 While you may have trouble keeping food down whilst hungover, it’s one of the most important cures to a hangover. Regulating your blood sugar will help you overcome your hangover, so carb heavy foods like bread or pretzels are ideal. Follow that up with some fruits, maybe in smoothie form so it goes down, smoother. And of course, you’re going to need some proteins. We suggest a dirty, greasy, cheat day burger, loaded with bacon, cheese, and a hash brown if possible.

Why it works: Excessive drinking has the potential to throw out your body’s natural balance of chemicals, causing metabolic acidosis. Eating a good breakfast that is rich in both lean protein and fibrous carbohydrates can help to maintain your blood sugar levels, providing essential vitamins and minerals to reduce the hangover symptoms. 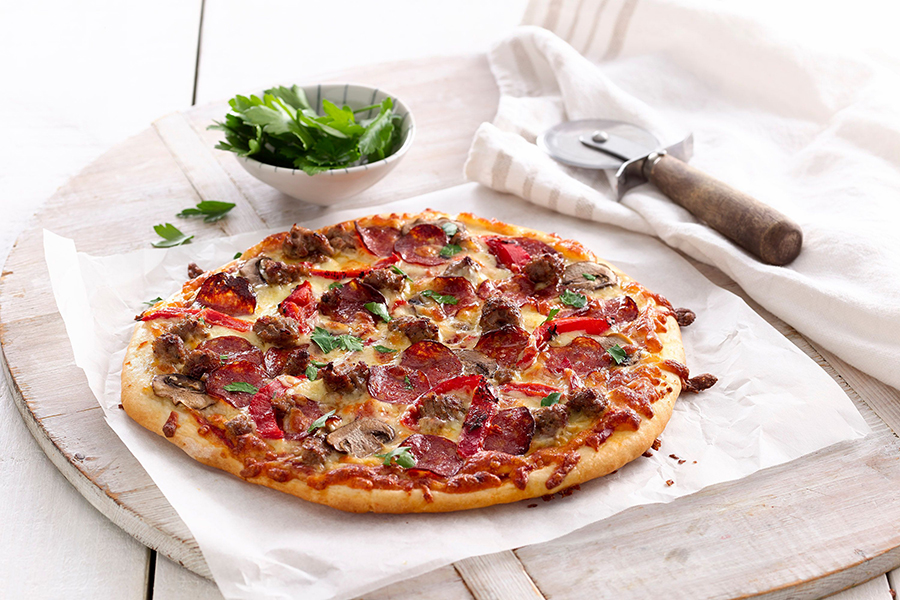 The carb heavy food doesn’t stop at the breakfast section of the menu. If you really want to kick this hangover, you’re going to have to refuel your body. You should be carb-loading like an athlete preparing for game day. This means pasta for dinner, garlic bread on the side (which you should be doing anyway, yum). Pizza covered with cheeses and meats. Basically, if it’s from Italy, you’re in the right area.

Why it works: The core symptom of a hangover is fatigue. Excessive drinking can lead to a poor sleep, an imbalance of chemicals and an irritable mood, all of which are exacerbated by a lack of energy. By ingesting carbohydrates, which are the body’s preferred source of fuel, you can get a quick energy hit that significantly improve your mood. 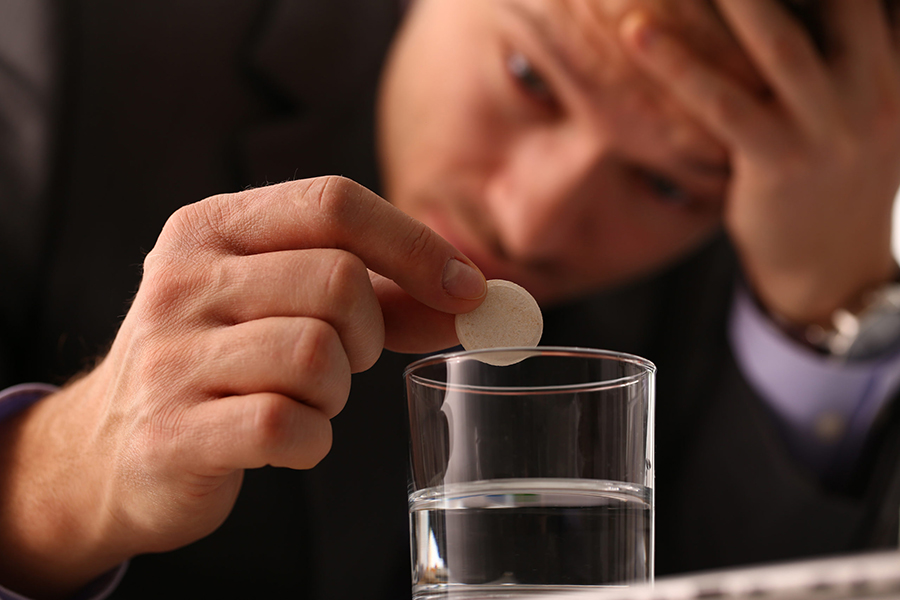 Now, some may say pain killers are a weak way out of a hangover. But whoever’s saying that has never felt as hungover as you are now. Taking an ibuprofen-based pain killer like Panadol, along with drinking water and a carb heavy meal, can help speed up your hangover recovery. Pain killers will only provide temporary relief, so it’s important to take other steps to cure your hangover alongside the drug. Luckily for you, we’ve still got a few more cures to come.

Why it works: Studies on treating hangover symptoms found that anti-inflammatory medications like over-the-counter ibuprofen can reduce the effects of excessive drinking. According to Sharron Orrange MD, MPH, two tablets (200-400 mg) with water before you get into bed will help reduce hangover severity. 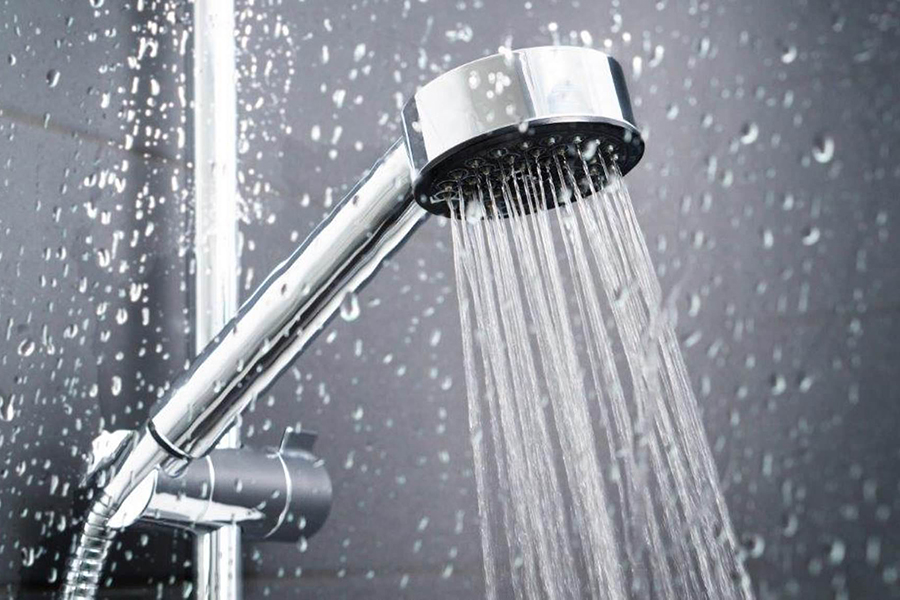 Showers feel amazing at the best of times, so it’s no surprise that it’s one of our 9 best hangover cures. Turning the tap to cold rather than hot will shock the senses, for a refreshing kick into action. If you’d rather enjoy a nice warm shower instead, that’s perfectly alright as well. Just remember your water bill, and don’t stay in there until you’re all pruned up.

Why it works: Taking a cold shower, especially after waking up from a big night, will increase your circulation and raise your heart rate. This will also help your body get rid of the toxins from the alcohol. 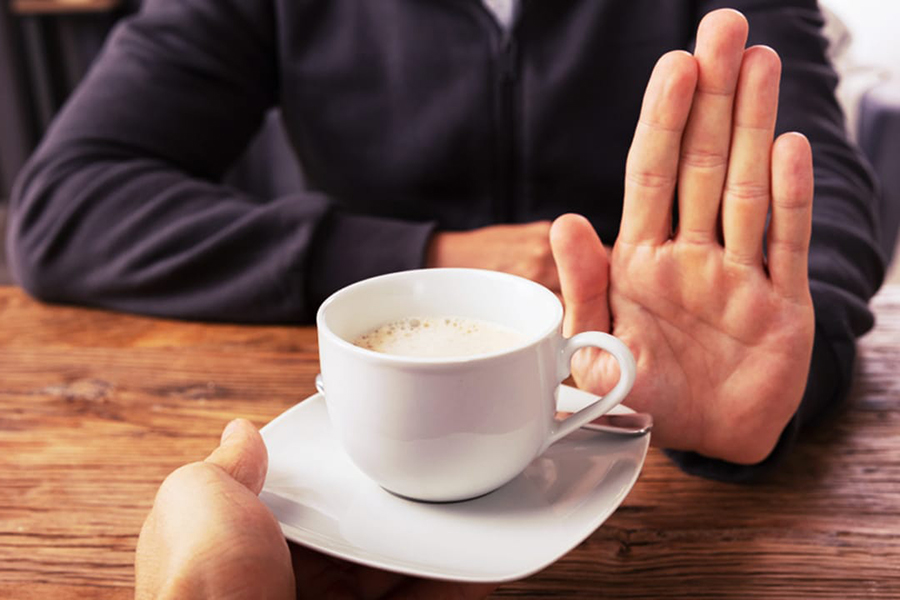 While you may think caffeine will give you that boost of energy you need, you’d be wrong. Caffeine can make you feel even more dehydrated, and that’s a step in the wrong direction for curing a hangover. If you find you’re unbearable without your morning coffee, go cup for cup with water to counteract the caffeine’s dehydrating properties. Or, for a healthier energy boost, have a banana instead.

Why it works: As mentioned above, hangovers are exacerbated by fatigue, and while caffeine will give you a slight improvement in energy, you will be quick to crash. In an interview with Health.com, John Brick, Ph.D said ingesting coffee straight after waking up could see you layer a pounding caffeine-withdrawal headache on top of your hangover, as caffeine narrows your blood vessels and boosts blood pressure. “Both of these may make the hangover worse,” Brick said. “If you drink coffee regularly, you might try a very small amount in the morning. Wait 30 to 60 minutes and see how you feel.” 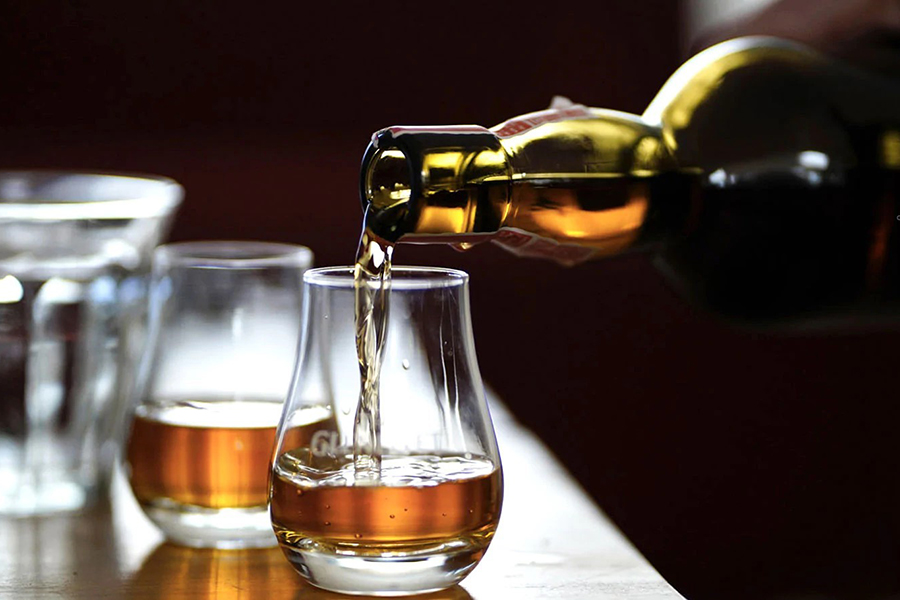 This hangover cure is handier to know before the hangover has occurred. So really, it’s just as useful as suggesting you drink less. But it’s important to know why dark spirits, like bourbon, tequila, and whiskey, are more hangover inducing than light spirits, such as gin, vodka, and rum.

Why it works: When alcohol is made, toxic chemical by-products called congeners are produced, with a higher amount of these congeners being found in dark spirits. These troublemakers can increase the frequency and severity of your hangover, as well as slow down your body’s processing of the alcohol, causing a prolonged hangover. While light spirits aren’t congener free, having less of them lessens the impact of the following hangover. Keep that in mind next time you’re ordering from the bar. Remember what we said just before about getting more sleep? That was true, but exercise is just as important to curing your hangover, as annoying as that sounds. Sure, the last thing you feel like doing when your suffering with a monster hangover is hit the gym and pump some iron, but it could be the answer to quashing that thumping headache.

Why it works: You may not do exercise even when you’re in full health, but exercising when you’re hungover can increase your metabolism, helping your body to heal faster. Don’t think you have to work up a sweat, just a short walk in the sun and fresh air can do wonders for your hangover and your mood. 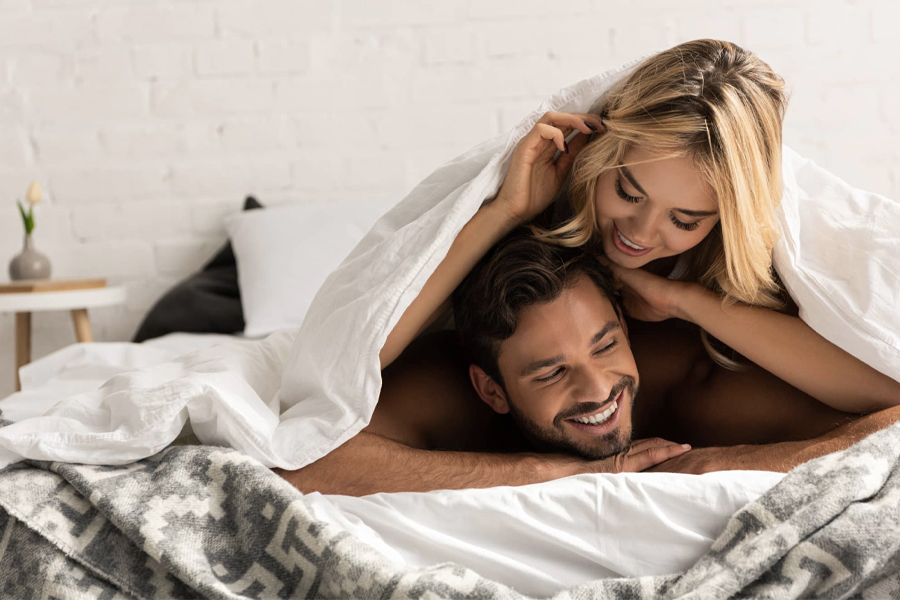 Believe it or, having intercourse may actually help you with your hangover. It has a lot to do with how our bodies function. While you may be suffering from hungoiver horniness, there is a chemical compound to blame, and there is a good reason why this phenomenon takes place. When we orgasm, we are flooded with hormones, one of which is oxytocin. This chemical helps us feel empathy, bond with our partners, and heal our wounds, but it also has some anti-inflammatory properties.

Why it works: A 2010 study found that couples who succeeded at a bonding exercise had elevated oxytocin levels, meaning their ability to heal from wounds was hypothetically better. The study also suggested that the oxytocin the couples got from working together blocked cytokine production. While, the evidence on whether sex can dramatically improve your hangover or not is still up in the air, it cant’t hurt to try, right?

Of course, a hangover can be avoided altogether by drinking responsibly. But where that’s not possible, try to drink water during your night out, to lessen the extent of your hangover the next day. Choose your light spirits over your dark spirits, leave your running shoes out for the morning, and if you do have work the next day, practice that fake sniffle for the boss.

What is the best hangover drink?

The best drink to have when hungover is water, as the key to a hangover is re-hydrating your body.

What is the meaning of a hangover?

A hangover is the aftermath of drinking too much alcohol, and is a combination of the alcohol, dehydration, and lack of sleep.

Does Berocca help with a hangover?

A Berocca can hydrate the body after a night of drinking, as well as provide the body with vitamins and minerals to aid in hangover recovery. 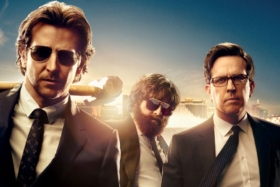 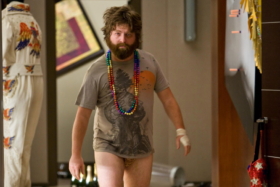 Drinks
The 40 Funniest Names for a Hangover 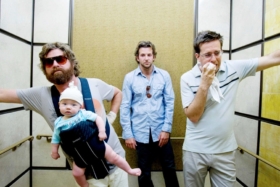 Drinks, Featured
Why Some Wines Give You a Headache and Others Don't
load more articles