With Super Bowl LV upon us, now is the perfect time to check out the Tom Brady diet and workout plan. At the age of 43, the NFL star is still proving himself a perennial champion. That’s partly thanks to a unique fitness program known as “The TB12 Method,” which is also the name of his 2017 book. A bit gimmicky perhaps, but have you compared Tom Brady’s body now to when he first started out in the NFL? He must be doing something right.

As Brady continues to defy the trends of athletic performance, various questions percolate about his lifestyle habits. Is Tom Brady vegan? What does the TB12 diet consist of? What’s Tom Brady’s weight? How does one go about scoring his own Brazilian model wife? Okay, so maybe we can’t help you with that last one (or can we?), but for everything else, we have you covered. Here’s the Tom Brady diet and workout plan. 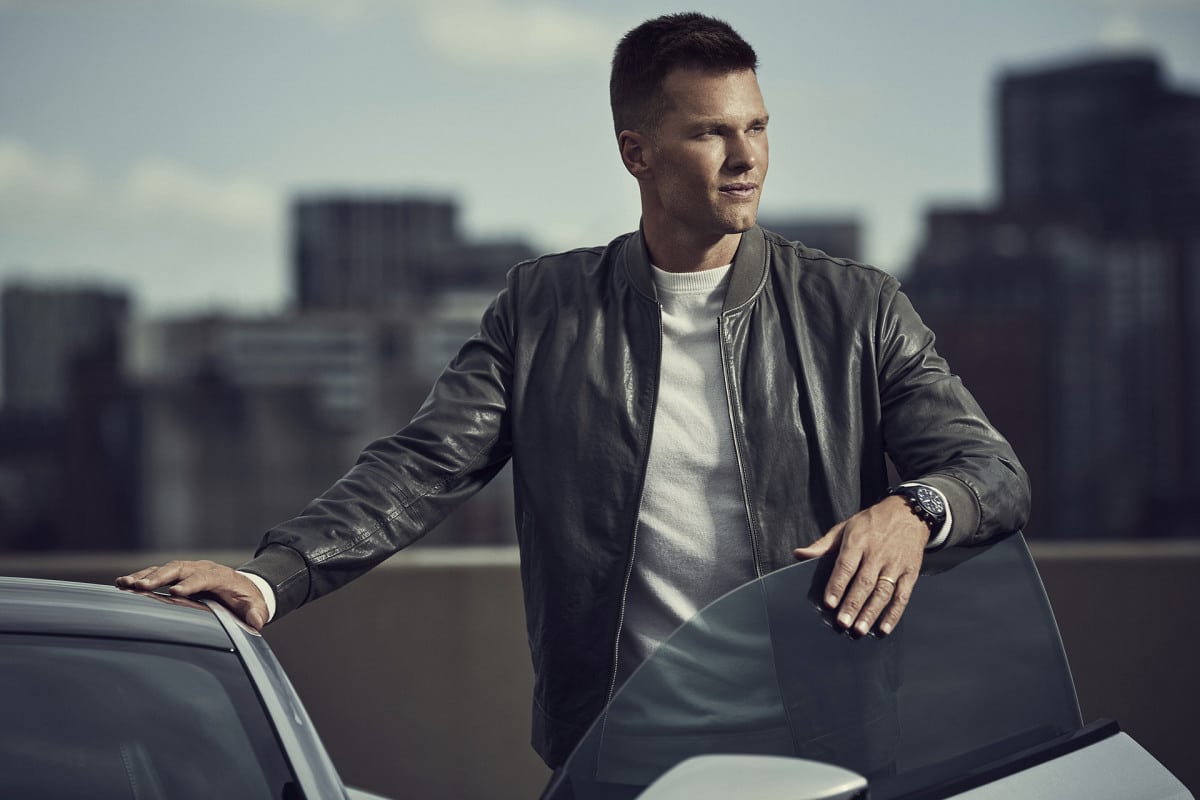 Who is Tom Brady?

So as not to insult your intelligence, we’ll try to keep this brief. Born in San Mateo, California, Thomas Edward Patrick Brady Jr. launched his football career as the back-up QB for his high school JV team. He was starting for the varsity team by his junior year and soon gaining all the right kinds of interest from college recruiters.

Despite an opportunity in professional baseball, Brady stuck with his sport of passion and ended up playing football for the University of Michigan in 1995. Upon being promoted from back-up QB to starter to team captain, he broke passing records and led his team to respective victories at the Citrus Bowl and Orange Bowl.

As inconceivable it may seem now, Brady wasn’t drafted until the sixth round of the 2000 NFL draft by the New England Patriots. Over the subsequent 20 seasons, he would win six Super Bowls and break more records than we can count. He currently plays for the Tampa Bay Buccaneers and is on his way to yet another Super Bowl. 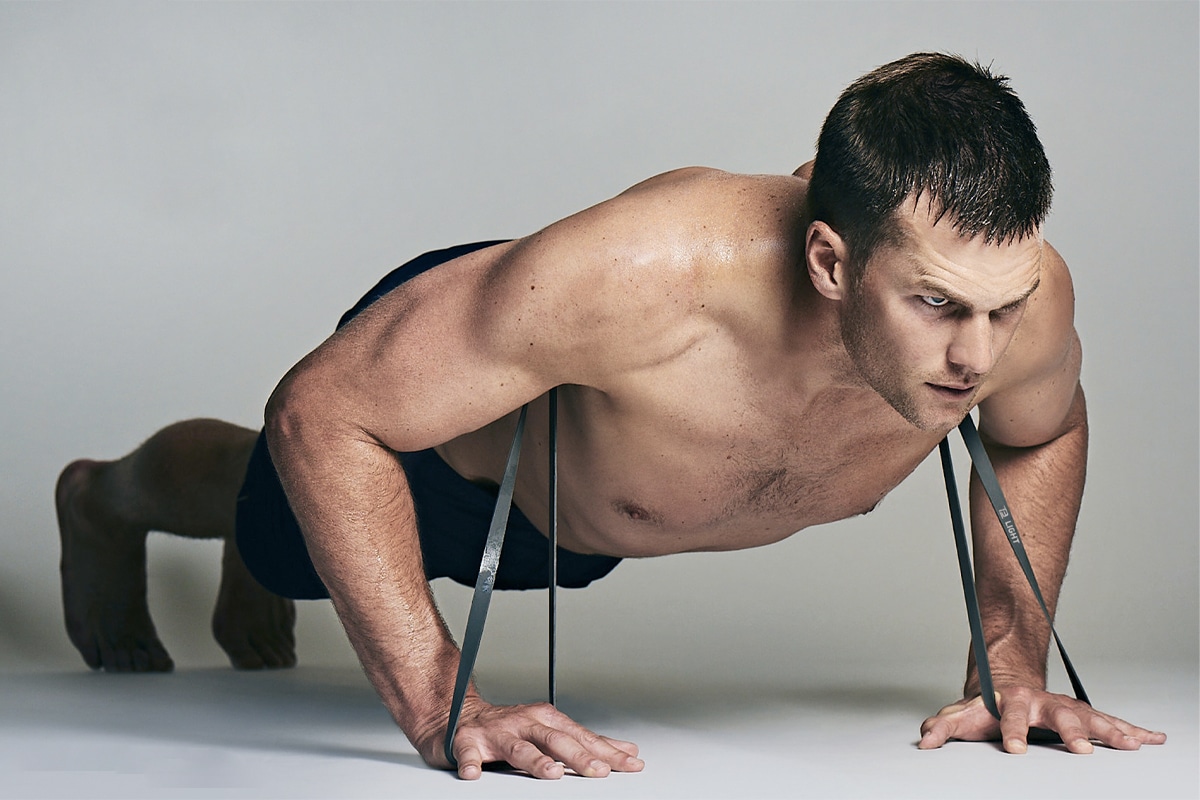 What is the TB12 Method?

In 2017, Tom Brady released a #1 best-selling book called “The TB12 Method: How to Achieve a Lifetime of Sustained Peak Performance.” A lifestyle brand, fitness regimen, and memoir wrapped into one, it offered readers a glimpse behind the proverbial curtain.

The TB12 diet and workout program remains fundamental to Brady’s overall performance, though surely it’s also a way for him to push nutrition products and other merchandise. Speaking of which, did we mention he has an estimated net worth of US$200 million. But we digress. Onto the diet and workout! 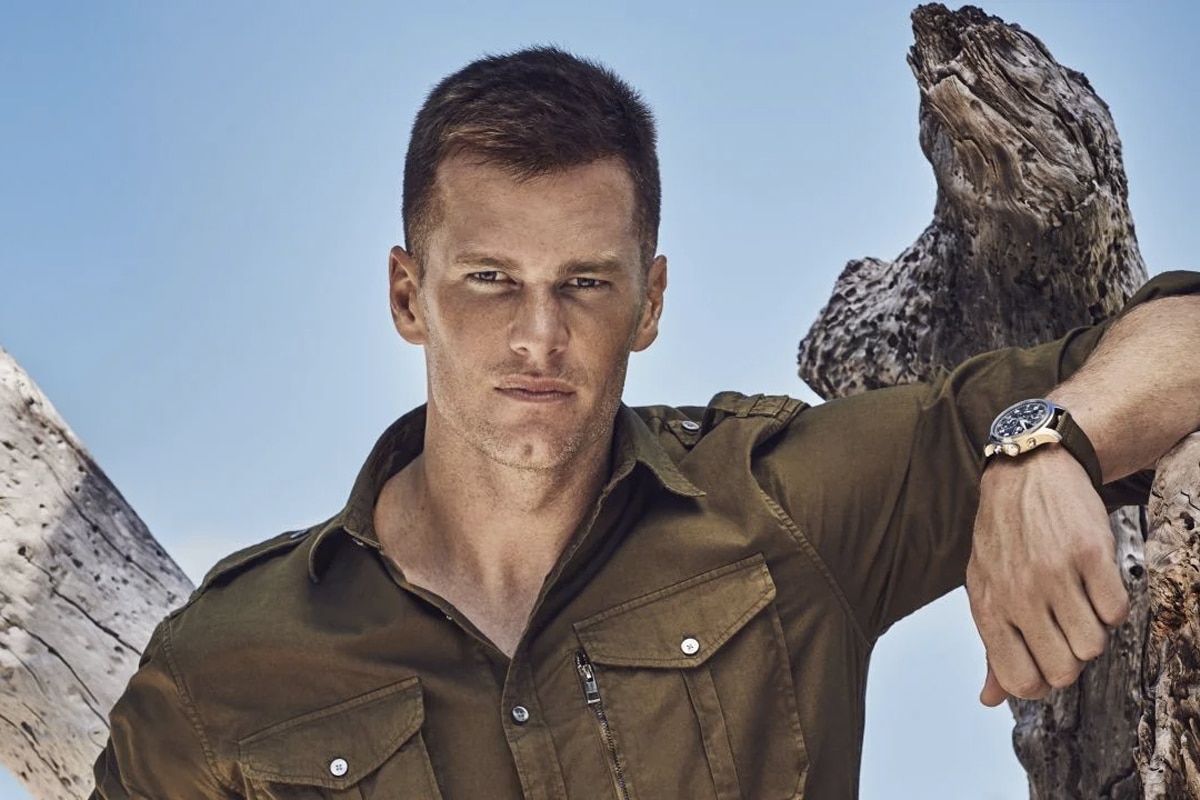 With his height of 6’4″ and estimated 225-pound weight, Tom Brady retains a relatively lean physique in 2020. Yet his body was famously awkward and lanky when he was first drafted to play in the NFL. Over the course of years, he fine-tuned his figure with considerable success. Indeed, many feel that he’s never looked better than he does now. A dedicated training program is naturally responsible, but so too is a fairly meticulous diet plan.

Is Tom Brady vegan? We asked above. The answer is no, though the TB12 diet may still surprise you. Culling from various influences, it consists primarily of whole foods and retains a thoroughly disciplined edge. When practised, it can reportedly increase energy levels, reduce inflammation, ward off injuries, and bolster performance, amongst other things. 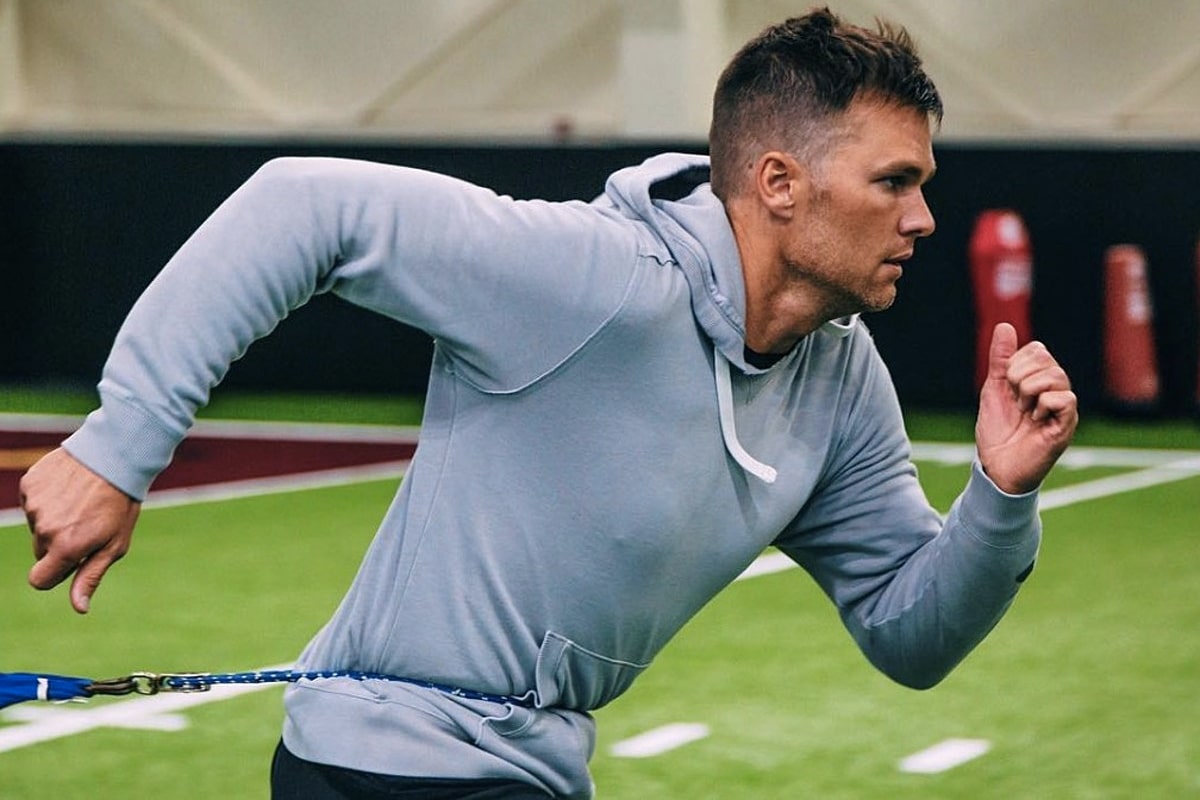 While some may say the proof is in the pudding (the pudding being Tom Brady’s body, in this instance), others suggest that the TB12 diet isn’t necessarily backed by hard science. Some will also argue that the diet is way too restrictive to maintain for extended periods of time. To which Brady himself might respond, “That’s what cheat meals are for.”

Critiques aside, Tom Brady’s diet plan appears to work for him and it could very well work for you, too. Here are some basic tenets of the program:

As you can see, Tom Brady’s diet asks you to pay very careful attention to what you put into your body. It may even seem so restrictive that you’re wondering what foods remain. Thankfully, Brady was kind enough to share an example of his average off-season meal plan back in 2019. It looked something like this:

Brady also told Men’s Health that he’s no stranger to the occasional cheat. “If I’m craving bacon, I have a piece. Same with pizza,” he said. Nevertheless, if you want to lose weight Tom Brady-style, you should prepare to make some sacrifices. 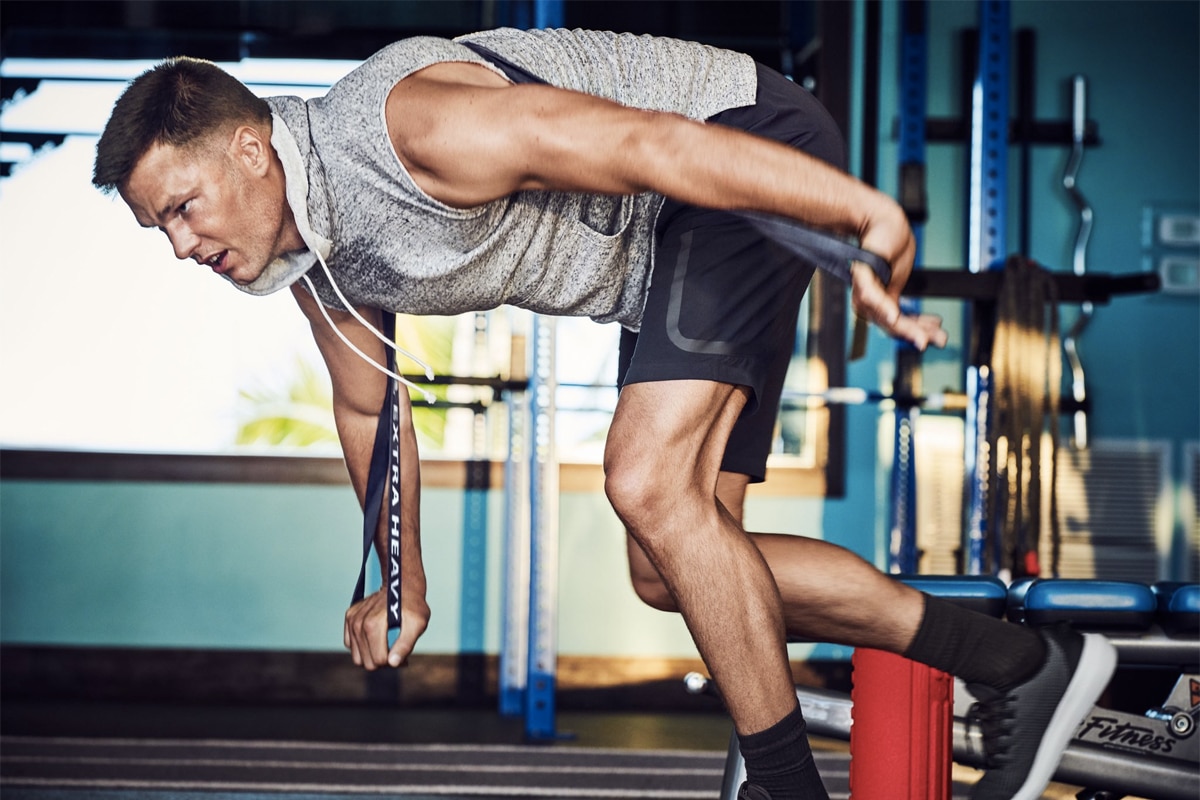 With help from personal trainer Alex Guerrero, Tom Brady remains in top physical form. During the off-season, he’s been known to visit a private training facility in the Bahamas and put the TB12 workout to use. Generally speaking, he works out four to five days a week and even makes time for brain exercises.

In regard to both Guerrero’s methods and the program itself, Brady said the following: “I absolutely know 100 per cent that it works, and the reality is I’m just a client who lives by the teachings.” Here’s a window into Tom Brady’s workout routine during the off-season, as per Men’s Health in 2019:

As you may notice, Brady prefers resistance band training to regular weight training. This is in order to maintain a focus on speed, agility, and core stability. Unlike resistance bands, heavier weights can lead to tear-prone muscle fibres. “You can’t do weighted squats one day and then the next expect to be fast and nimble in the other direction,” said Guerrero. 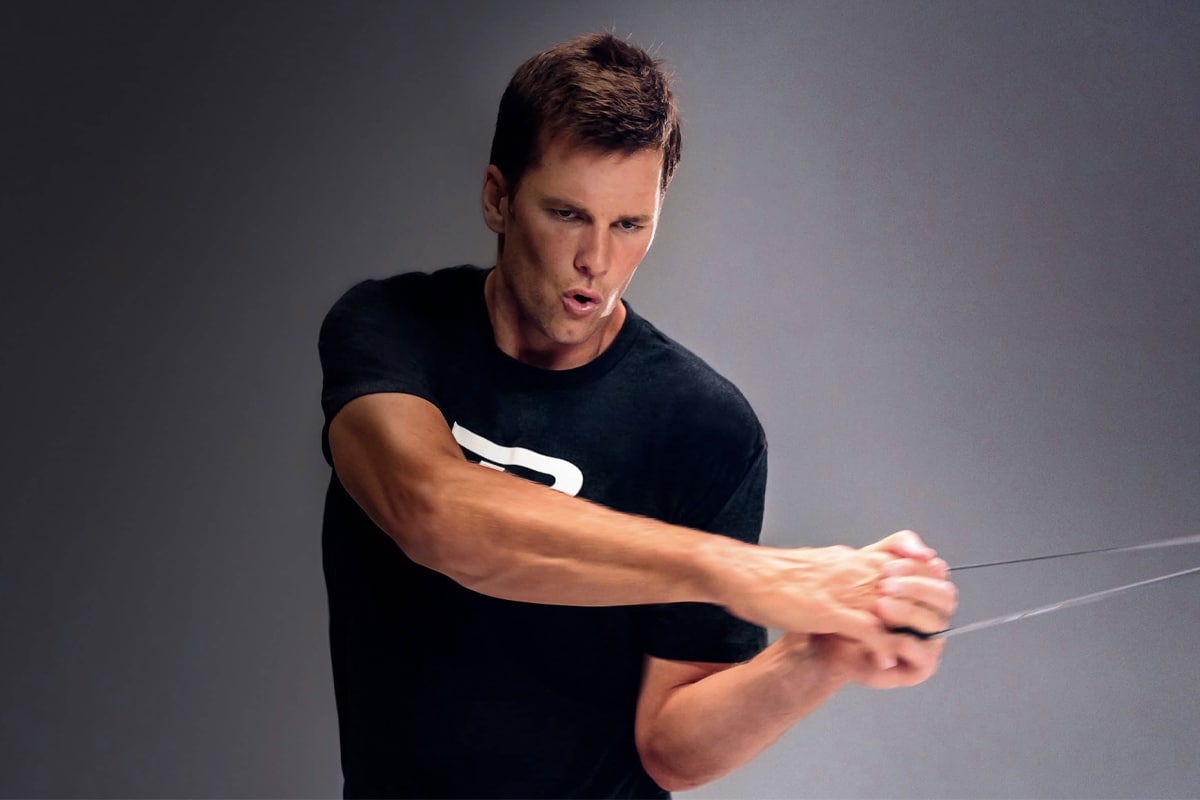 During the playing season, Tom Brady’s workout takes on more intensity and complexity alike. With the goal of building strength, skill, recovery, and conditioning, Brady and Guerrero employ a 9-exercise program. Once again, resistance bands play a vital role. Here are some pointers from the TB12 workout:

Then we have a full-blown TB12 workout program, which looks something like this:

Tom Brady practices the TB12 diet, which is not vegan. It reportedly consists of 80% plant-based foods and 20% animal-based foods.

What does Tom Brady eat in a day?

During the off-season Brady typically starts his morning with a berry and banana shake. That's later followed by a post-workout breakfast of eggs and avocado. He usually has a salad with nuts and fish for lunch and then chicken with veggies for dinner. He also snacks on hummus, guacamole, and mixed nuts. Every now and then, he'll indulge in a slice of pizza or strip of bacon.

How much is Tom Brady worth?