Thanks to plenty of natural talent and some serious athletic training, Lionel Messi is one of the best footballers to ever play the sport. Winner of countless championships and awards, the Argentine-born superstar boasts incredible speed, insane ball control, and consistent striking ability. He recently scored his first goal of the season for Spanish club Barcelona and broke a record in the process, which is pretty much par for the course. Between that, his insane power-to-weight ratio, his rivalry with Cristiano Ronaldo, and his world-famous muscles, Lionel Messi fans are right to wonder about the secret to his physical success.

Meanwhile, Messi’s glorious run isn’t always as smooth as his achievements (or muscles) might suggest. Throughout his career, the athlete has overcome numerous physical obstacles to get where he is today. That includes being diagnosed with a growth hormone deficiency at a very young age, followed by an ongoing string of harrowing injuries. Just this year, he was temporarily sidelined by a Grade 1 strain in his right calf, only to bounce back in late September.

Despite all the setbacks, Lionel Messi continues to dominate on both the national and international stage. So how does he not only recover from injury but retain his unparalleled skills in the process, one might ask? Enter the Lionel Messi football diet plan and workout routine. As you can probably guess, this fitness regimen involves running exercises, weightlifting, and plenty of conscious eating. If you want Lionel Messi’s muscles and his mind-blowing speed, here’s a good place to start. 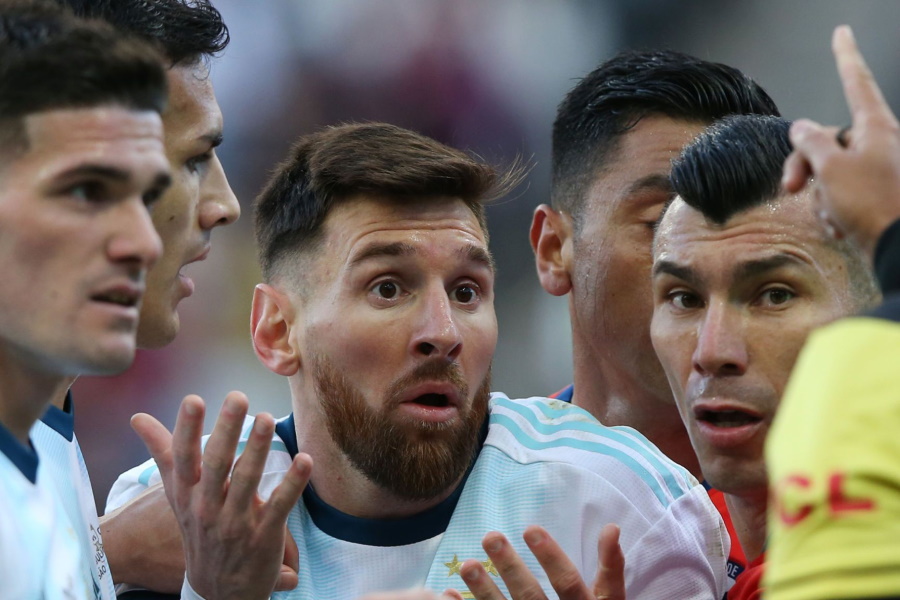 Being one of the best athletes in the world involves making certain sacrifices when it comes to eating, and that’s as true for Messi as it would be for anyone else. On the other hand, the legendary forward hasn’t always been strict about his diet regimen. During his younger years, he frequently indulged in fast food, fizzy drinks, pizza, and Argentine dishes like Milanesa, which involves shallow-frying a breadcrumb-coated fillet of beef.

As Messi aged, he was essentially forced to rein in his eating habits. To quote the athlete directly: “What you can put into your body at 18 or 19 years of age is not the same as what you can put in at 27.” That meant cutting down on the pizza and fried beef, for starters, though surely he still makes room for the occasional cheat day.

In his effort to take on a healthier lifestyle, Messi began working with Italian nutritionist Giuliano Poser in 2014. If the Poser diet can be boiled down to five essential categories, they would be the following: water, olive oil, whole grains, fresh fruit, and fresh vegetables. Collectively, these foods aid with muscle recovery and provide the foundation for Lionel Messi’s ongoing diet. “Also very good are nuts and seeds,” Poser added during a previous interview.

As far as avoiding certain foods, Poser stresses the importance of eating as little sugar and refined flour as possible. Sugar, according to Poser during the same interview, “is the worst thing for the muscles. The farther he stays away from sugars, the better.” He then went on to say, “Refined flours are also a big problem as these days, it’s difficult to find uncontaminated wheat.”

When training, Lionel Messi also shied away from eating too much meat. In Poser’s own words, “The amount of meat normally eaten by Argentinians and Uruguayans is too much, as it is difficult to digest.” To compensate for the lack of protein, Messi reportedly drinks up to three protein shakes a day (along with tons of water) as a new match draws near.

As you can see, the Poser diet (and Messi diet, by extension) is ultimately about eating healthy food and the right kinds of carbs, while reducing meat intake and supplementing protein. In lieu of fizzy drinks, Messi reportedly consumes Yerba Mate tea, a caffeinated South American beverage. By adopting this new approach, Messi was able to reduce injuries and even overcome the occasional vomiting fits he experienced before big matches.

Nowadays, Lionel Messi retains the habits he picked up from Poser, even if he’s taking most of his diet advice from Barcelona’s nutrition team. Overseen by Dr Maria Antonia Lizarraga Dallo, the nutrition team advises players to refuel as often as possible after a match, by way of pasta salad or protein-rich sushi. Alcohol consumption is completely frowned upon, so Messi probably saves the booze for the off-season.

It’s also been reported that after losing in the 2018 World Cup, Messi adopted a completely vegan diet during the playing season. From what we can gather, this information has never been completely confirmed or denied by Messi himself, though that hasn’t stopped plenty of vegan publications from running with it.

What we can say is that Messi was definitely still eating a fair amount of Argentinian barbecue back in 2014, and occasionally posting the proof to his Instagram feed. Meanwhile, a 2018 news article suggested that Messi still eats a little bit of everything, but in moderation. So is Lionel Messi 100% vegan or isn’t he? The question remains unanswered. 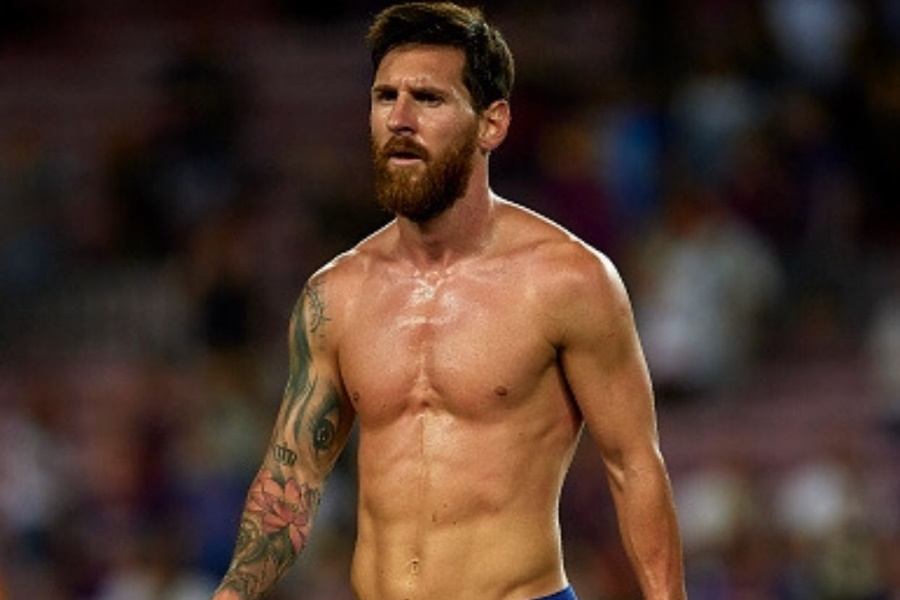 Through a combination of natural talent and hard work, Lionel Messi remains a completely dominant force on the football pitch. Not only is his speed, dexterity, and goal-scoring ability almost literally second to none, but as a relatively small player, he delivers a truly formidable power-to-weight ratio. So what’s the secret to his success?

According to most sources, Messi isn’t as rigorous about exercise as other players like Neymar and Cristiano Ronaldo, but don’t take that to mean he doesn’t maintain a consistent workout routine. When training, he primarily focuses on three key factors: speed, strength, and stretching. In fact, it’s been reported that he stretches for over an hour every day during the La Liga season. Not only does this method keep his muscles spry and optimal, but it boosts Messi’s performance during gameplay.

Otherwise, his routine is divided into different sections, each of which consists of several exercises. And while some weight training certainly plays a role in Messi’s overall fitness (and his muscles), the majority of exercises revolve around maximising agility and building speed. More to the point, he employs both linear speed and multi-directional speed workouts.

It’s largely thanks to this multi-pronged approach that Messi is able to deliver explosive power, omni-directional speed, consistent stability, and indisputable quickness. Well, that and his natural talent, of course. Put it all together and throw in some impeccable ball control and it’s not hard to see why he’s always one literal step ahead of the competition.

For a better idea of Lionel Messi’s training regimen, check out the following two workout routines. According to legend, Messi trains every day during the playing season, and you should likewise be prepared to employ this regimen for at least five days per week. And if you really want to walk in his cleats, don’t forget to stretch for at least an hour every day. Now you’re getting it!

Here are the two routines: 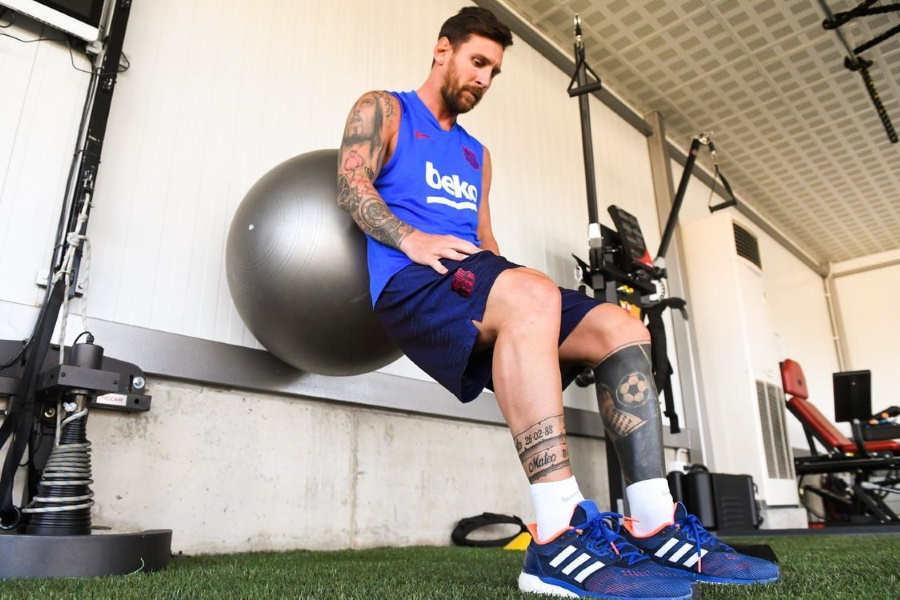 Here are some common questions (and answers) people ask Google about both Lionel Messi and other athletes.

What is Lionel Messi's diet?

What is Messi's workout?

How often does Messi practice?

During the season, it's been reported that Lionel Messi trains every single day of the week.

Some reports indicate that Lionel Messi adopts a vegan diet during the playing season, but the athlete has never confirmed his status as a 100% vegan.

What does Messi eat for breakfast?

Since 2014, Lionel Messi's diet has consisted largely of fresh fruit, fresh vegetables, nuts, seeds, olive oil, and whole grains. On the day of a match, he's been known to eat porridge or egg whites for breakfast, followed by fruit.