Sydney, scratch that, Australia, waited two years for Oncore by three-star Michelin Chef Clare Smyth MBE to open its doors on level 26, 1 Barangaroo Ave, Barangaroo. Britain’s first female, British-born, three Michelin-starred chef built up the excitement levels and in the process crafted a menu that is both familiar (to fans of Core, London) and fresh by taking advantage of Australia’s best raw ingredients. With head chef, Alan Stuart – of Restaurant Gordon Ramsay and Core restaurant Notting Hill – the food is exciting and the location is arguably the best in Sydney.

Did you know the Hublot Big Bang arrived as an ‘E-Watch’ back in 2020? Check it out here. 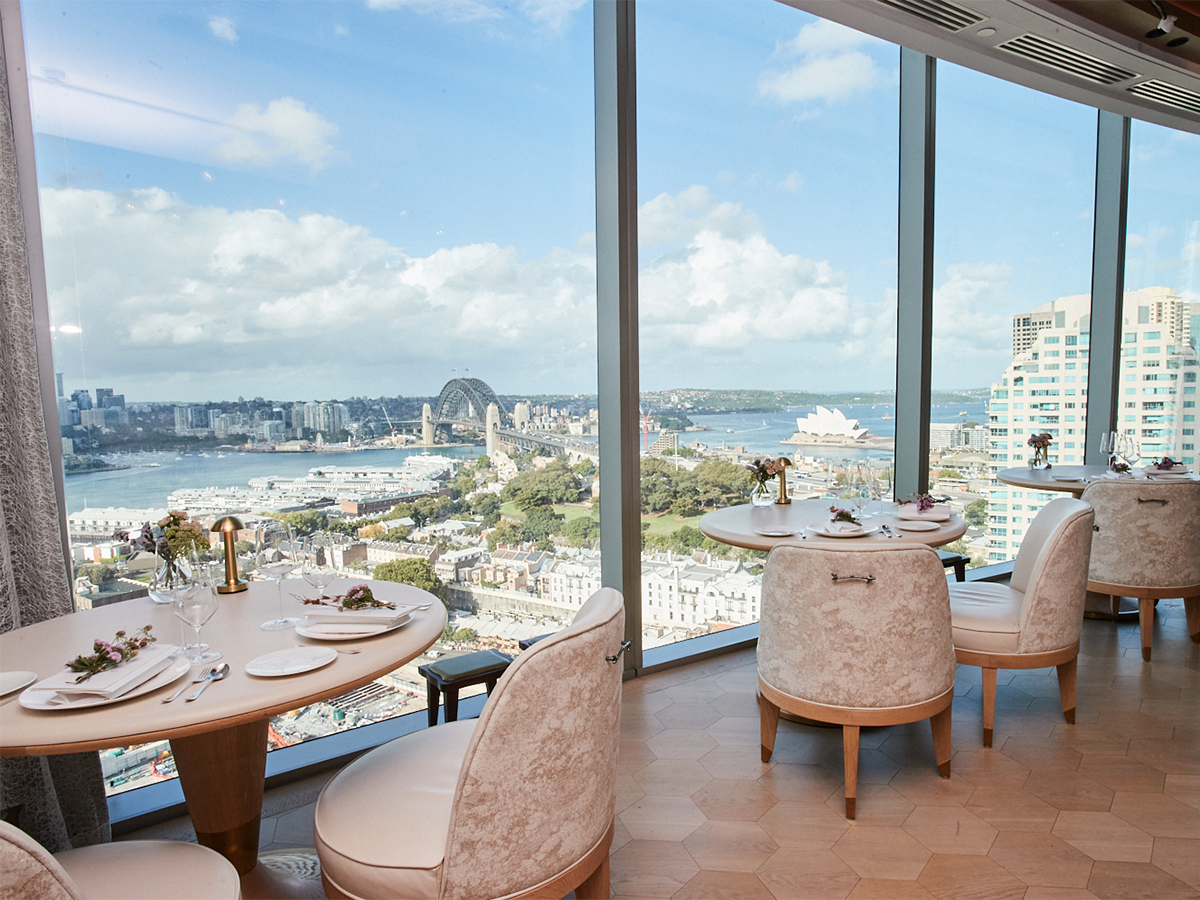 The view from 26 storeys up is spectacular, matched only by the food and watches we experienced.

When she’s not cooking at the Royal Wedding reception of Prince Harry and Meghan Markle, Chef Clare Smyth is garnering a host of awards, including three-Michelin stars in just eight years for her work at Restaurant CORE in London. There are some lofty expectations that go along with such esteemed success, so how has Smyth found the process of replicating something so successful to an international audience? She says it’s all about location.

“Obviously, it’s a challenge, and my ambitions are high with Oncore as my second restaurant. I want it to achieve similar success and level to Core, and that’s the whole reason we brought it to the other side of the world. We can create something over there, but to do something here that is of equal quality, it will become unique in its own right.”

Previously visiting Australia for a mixture of business and pleasure, Smyth has described Australia as a “home away from home.” it’s safe to assume Sydney was always on the cards for the World’s Best Female Chef, 2018.

“I love Sydney and even just coming back this time where I haven’t had as much time outside of the kitchen, I still feel so lucky to be able to have somewhere. I’m just in the best place, having a home back in London, having a home here now and I just love spending time here.”

As the saying goes, when the opportunity comes, sometimes you just have to chase it.

“I mean it was such a good opportunity . The people I’ve worked with often move on, but as soon as I have the opportunity that’s right for them I’ll do it. To give Head Chef Alan Stuart this opportunity was such a pleasure, an outstanding chef that I’ve known since he was a youngster, it’s been a pleasure to watch him come through his career, it’s one of my greatest privileges.”

Speaking of the food, Oncore draws mostly on the classics found at the Notting Hill restaurant but takes advantage of raw Australian ingredients. Smyth wants to give Aussie fans the Michelin Star experience without having to fly halfway around the world.

” consists mostly of Cores classics, we wanted to work with that to give everyone the opportunity because Core is still quite new and we wanted that similar experience. In many ways though, they are slightly different as the products are quite different and we had to adjust some of the recipes, but we’ll do that no matter where the restaurant is in the world.” 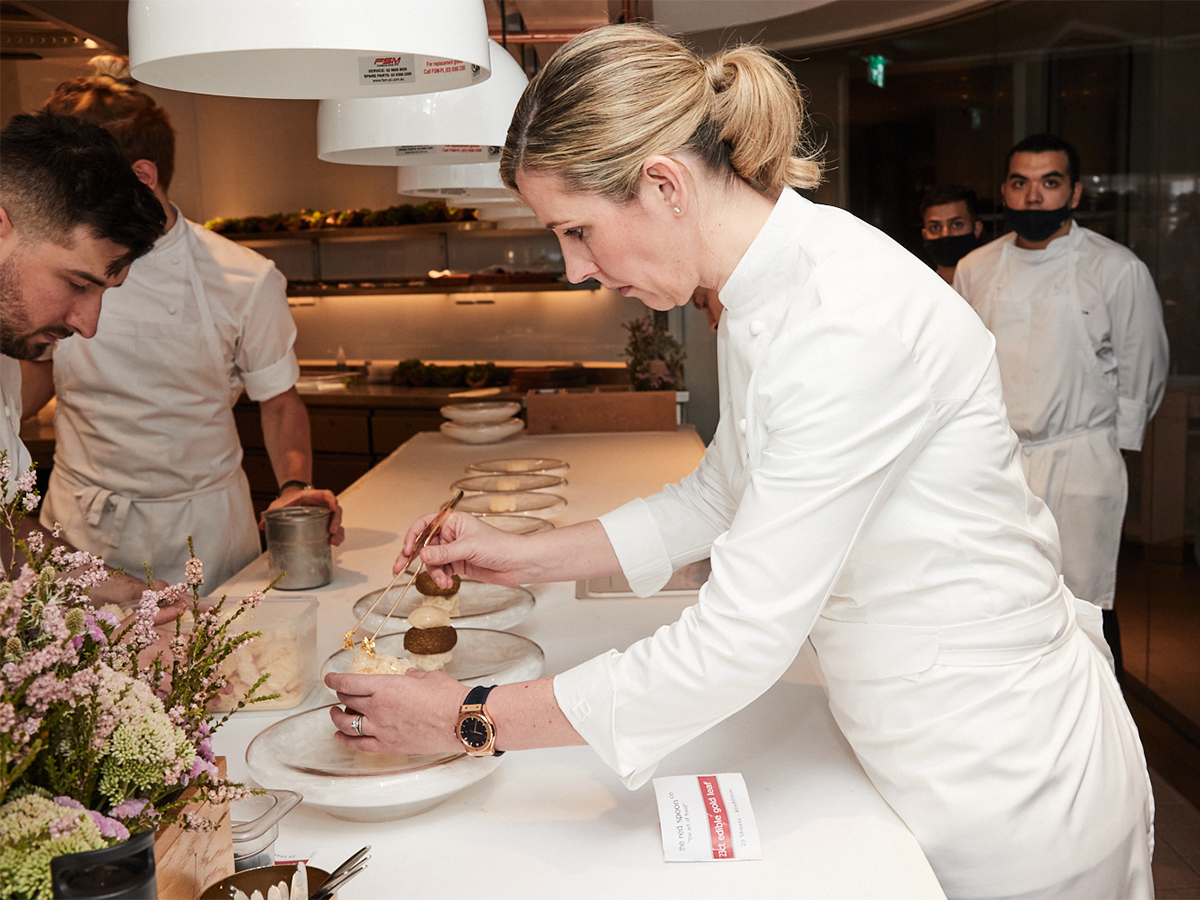 Success seems to come in twos for the pioneering chef. As her new restaurant opened its reservation book, Smyth jumped onboard as a ‘friend of the brand’ to luxury watchmaker Hublot. The partnership came naturally, representing both the watchmaker’s and chefs’ ability to innovate in a space by discovering new purposes for materials and combining them to create something special.

“I love watches, so the partnership couldn’t have been better.”

“I love to restrict myself sometimes and see what I can come up with and how I can extract the maximum amount of flavour from something that is just an ingredient, something that is humble that needs to be grown. The Potatoe Roe for example is just an onion, carrot, potato, and artichoke, but it’s like the ultimate form of this. Seeing what we can do with something to create this incredible flavour. I can use all my skill.”

There’s always been a great connection between fine watchmaking and fine dining, particularly the synergy of luxury.

“There’s always going to be that synergy if you enjoy finding luxury things. I’m still mind-boggled by how a watch works, it’s insane, how they are put together, the shape, skill, and movements. For me, it always comes down to the respect for something that is beautiful, that you love and you put it on your wrist, the way it’s made and crafted is just incredible.”

Precision and timing are essential for the world’s best chefs. Combine expertise and a passion for fine luxury with the best ingredients and you have an unbreakable connection between gourmet cuisine and Horlogerie. Clare joins Hublot’s growing family of culinary partners, with three Michelin star chefs Yannick Alléno, Andreas Caminada and Paul Pairet partnering with the Swiss luxury watchmaker. Oncore by Clare Smyth is Sydney’s best new fine dining restaurant and bookings can be made via the link below. 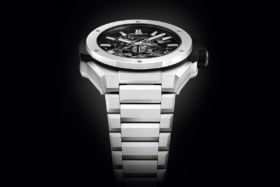