All we need now is a Marauder’s Map, and we’ll be able to sneak around being up to no good. Of course, Canadian company HyperStealth Biotechnology has a different use in mind for their Quantum Stealth camouflage material. The material is essentially an invisible cloak meant to keep armies hidden, and the company has filed for patents on the advancement.

The material essentially works by bending light waves around objects—objects like soldiers, fighter jets, and even tanks. And it does it all without any power source. Guy Cramer, the CEO of HyperStealth Biotechnology is understandably careful of sharing any information about the material, posting only mockups of the material in use. “This is mock-up of our ‘Quantum Stealth’ (Light Bending) material with my assistant behind it,” says Cramer of an image posted on the company’s website. “No cameras and no projectors are used. These photos are to show the Media the concept, for security issues we can not show the actual technology. With the real material you would only see about 5 percent of the shadow on her and the ground as we’ve determined a 95 percent reduction of shadow in testing.” Those mock-ups have led to a lot of skepticism and criticism, but Cramer shoots back with, “Two separate command groups within the U.S. Military and two separate Canadian Military groups as well as Federal Emergency Response Team (Counter Terrorism) have seen the actual material so they could verify that I was not just manipulating video or photo results.” And now you can add the Telegraph to that list, as the news agency posted a video of the “invisibility cloak” being used in a video on YouTube. Their description states that “the ‘inexpensive and paper-thin’ technology works by bending light around a target to either alter its position or make it vanish altogether, leaving only the background visible. It is touted to be able to obscure the positions of heavy artillery, ground troops, or even entire buildings from certain viewpoints.”

If this material is truly real, then the ramifications of its application could be staggering. Imagine trying to defend against an army that you can’t see in order to target or even track. Fortunately, it’s a Canadian company and they’re all well-mannered and polite in Canada, right? But you do have to wonder if they would be up for a few pranks and sneaking around after lights out.

Is there a real invisibility cloak?

Hyperstealth Biotechnology developed an 'invisibility cloack' that uses Quantum stealth material that bends light making anything behind it disapear.

Can you buy a real invisibility cloak?

THe Hyperstealth Biotechnology 'invisibility cloack' is designed for military use and is not available for purchase. 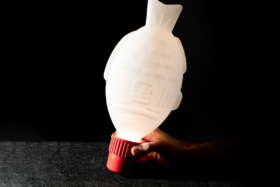