Laidback in his trailer at Paramount Studios in West Hollywood, Dominic West has just told me a dirty joke in an attempt to prove that he can, indeed, do comedy. And it’s funny, too, but journalistic integrity forbids me from repeating it here, so you’ll have to take me at my word. When selecting his favourite scripts from the huge pile that was sent to him for consideration for this year’s installment of Jameson First Shot, however, he happily admits that he was ready to make people laugh.

“That was the only criteria. No one’s ever given me comedy, I don’t know why because I think I’m hilarious. But really it was the same as it would be for any script that I read, it would just be: “Does it appeal to me? Can I see it realized? Is it something that I could do in terms of the acting?” 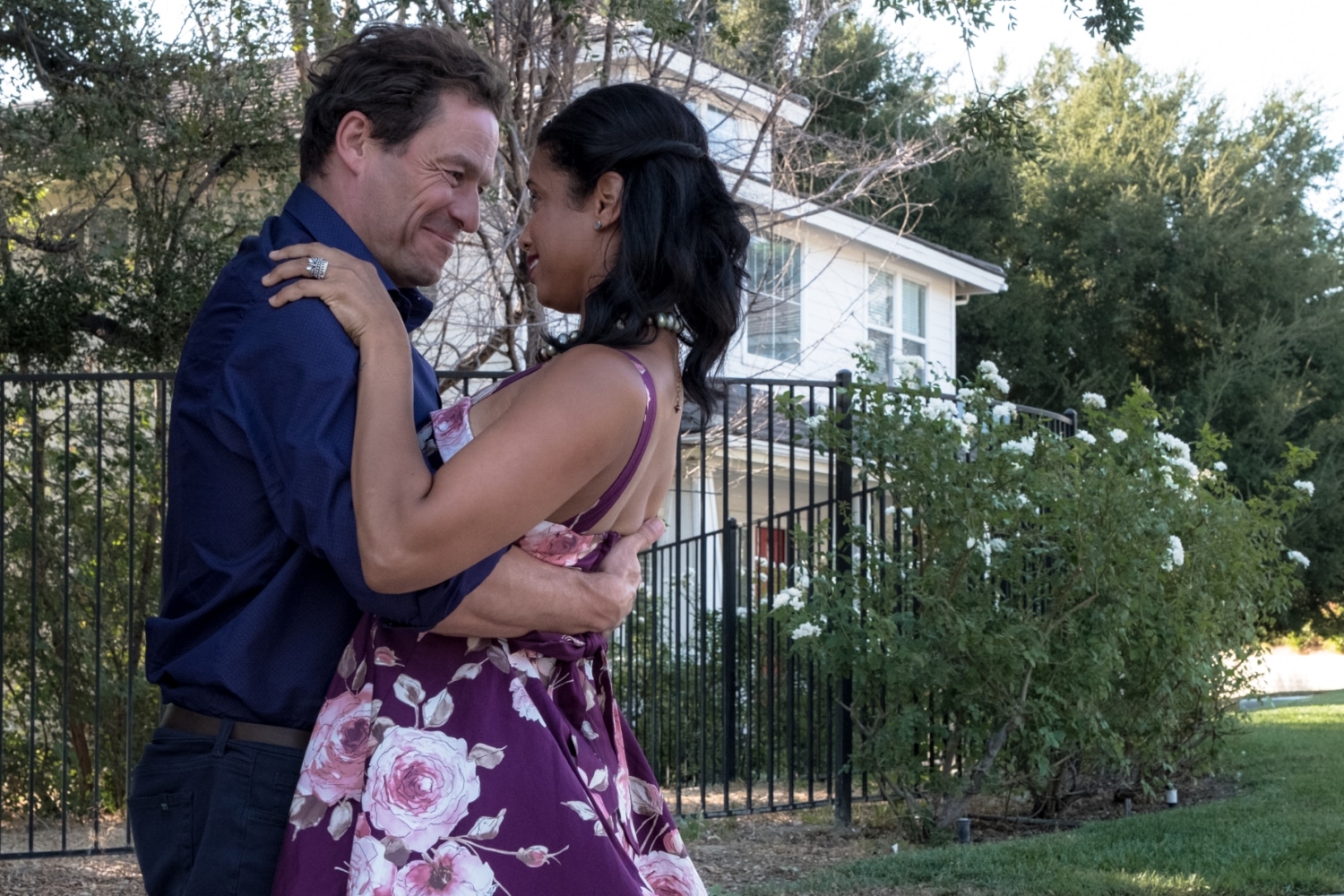 “It’s really just who’s got an idea; a story, and a way of telling it that’s gonna hold together and be interesting. Very few scripts actually are like that. These guys stuck out.”

“These guys” to whom Dominic refers with such complimentary vigor are, from England, Ollie Wolf; from Canada, Jason Manella; and from Australia, Alice Cogin. These are the three budding filmmakers whose scripts made it across the finish line, to be produced in Hollywood with the full support of Dana Brunetti’s production company Trigger Street Productions. The Jameson First Shot short film competition, now in its sixth year, has thus far given 18 fresh-faced filmmakers their first chance in Hollywood.

“I was working as an art director in Perth and I saw it on Facebook – there were a lot of directors that I was working with, up-and-coming people in my work. I told them to do it because it would be an awesome opportunity, then they started telling me their script and I got a bit excited, so I did my own. And then, yeah, I got shortlisted. And now I’m here.” Alice says in an intrinsically casual, Australian way. Her script for The Finish Line was a clear favourite for its incisive juxtaposition of comedy and tragedy in such a short window of time.

“She beat them all” adds Dominic, much happier to offer some bragging rights for the winning entrants.

“I was scrolling through Facebook too. I hadn’t heard about it before. The first time I heard about it was when I clicked on the video and saw Dominic’s face saying, “Hey everybody, enter the competition.” I threw the idea past all of my colleagues at film school as well, kind of like Alice did with her’s. I don’t know if anybody else entered but somehow I got here” says Jason, whose short film A Funny Thing Happened to Kelly & Ted tickled West’s funny bone, telling a mirthful story in a unique format.

“I thought I’d have a crack and I was away in Barcelona that weekend and I just wrote it,” says Ollie Wolf, who’s talking about what inspired him to enter his off-kilter script, Five Star Fouad, which allowed West to flex his comedy muscle while exploring a premise so obvious and clever it’s amazing to think it hadn’t already been done. “It’s one of those things where you kind of end up writing something quite good. It kind of came out. It’s probably rare, but I thought okay I’ll just submit it, see if it goes anywhere”.

“The thing about directing for me is the ability to be in the moment and aware of what you’re looking at and not become overwhelmed with machines and film-making, which I think you can be, and it can be very overwhelming” Continues Ollie, the most experienced of this year’s winners.

“What you need is focus, and that’s all that matters: what you’re looking at and what we’re doing. I think that if you can … If I can try and stay calm and stay present, then that’s all I can really do.”

The situation for Ollie, Alice and Jason was one of fortune, but also hard work and great pressure. While a cast and crew of 40 odd professionals to help craft their scripts into a cinematic reality certainly didn’t hurt, the time frames to which they worked were very tight. 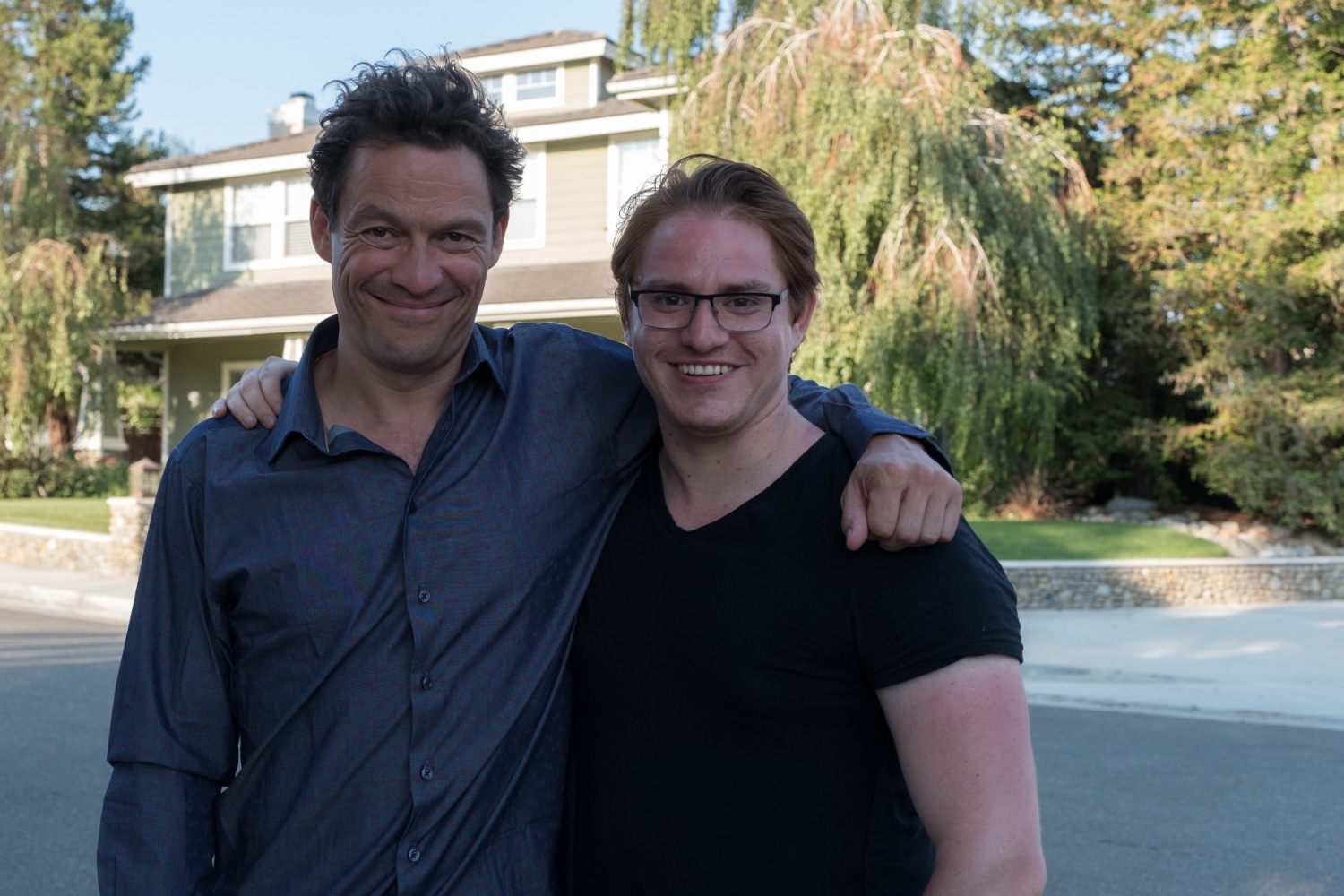 “We found out on the Friday, flew in on the Monday, and we were recce-ing on Tuesday,” says Ollie.

“And storyboarding into 3 am every night” adds Alice.

All three films are shot within a week, with Dominic the star of the show – each director is given two days on set to make their magic. This may not sound like a great deal of time, but huge amounts of planning and careful organization make for an easy time on set once the cameras are rolling.

“Dom came in really prepared and so did the actress that we cast for the lead. They really brought their A-game and they were really able to help me shape the story even further. I ran out of rhymes. My film has some rhyme in it” says Jason, his thick accent making his somewhat-of-an-understatement distinctively Canadian, though you’ll have to watch his film to see what I mean. 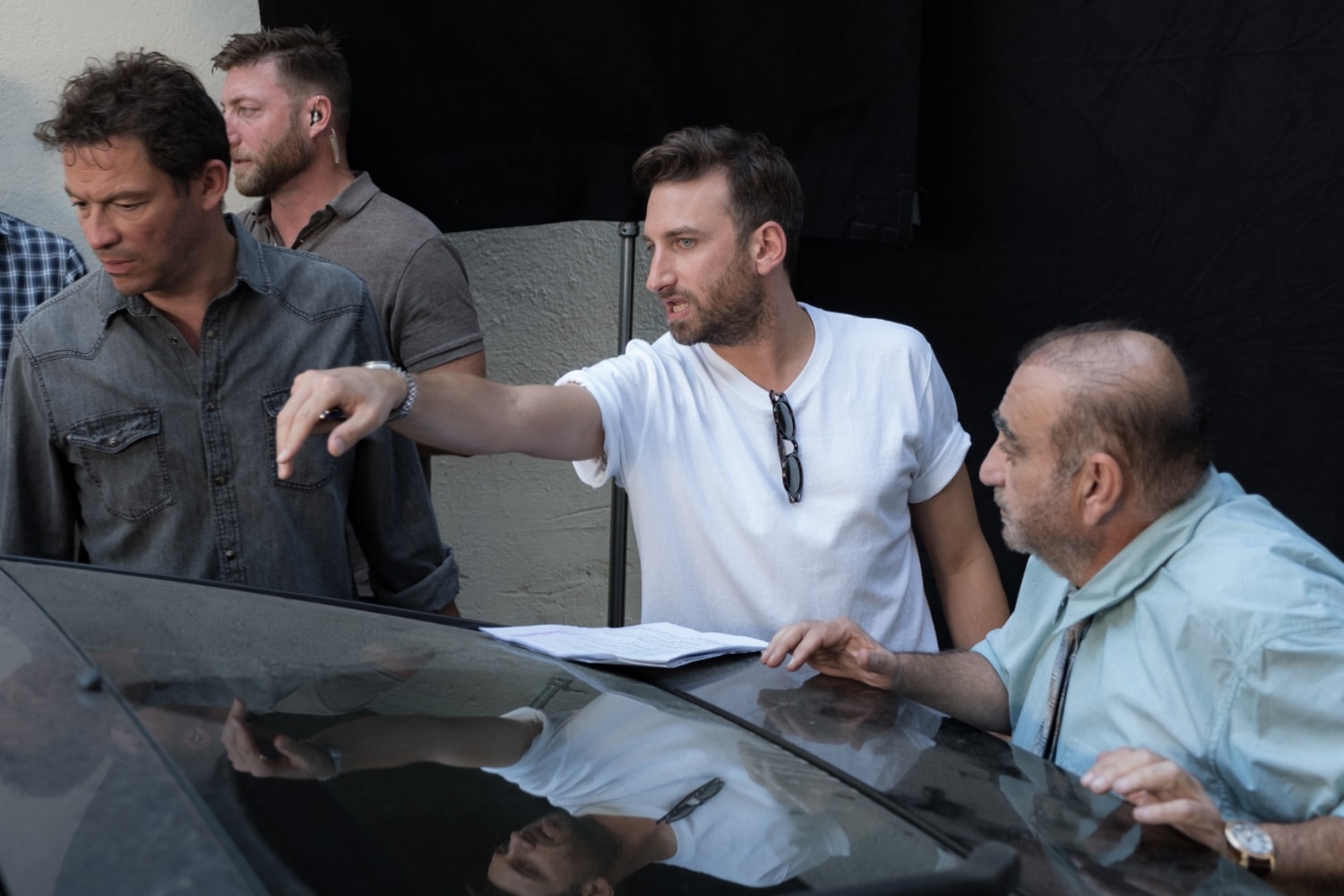 Something that’s become somewhat of a cause for Dana Brunetti, the man with the production company that makes this entire competition happen, is shaking up Hollywood. He found his first success with the film 21, but it was when he pulled together the winning formula to produce The Social Network that people started to notice. In a town overrun by comic book movies, remakes and sequels for which nobody asked, Brunetti championed original scripts and risqué material. He brought Fifty Shades of Grey to the silver screen. He decided that House of Cards would be streamed directly to Netflix, instead of ever making to a network, something that has now become common but, before his political drama was produced, hadn’t happened before.

Jameson First Shot is just one of the ways that the affable Dana is subverting the rinse, wash and repeat attitude of Hollywood, and it starts by giving young people a real chance to prove themselves in one of the world’s most famously competitive professional environments.

“I think that’s the purpose of it. To try and get good ideas out that would otherwise be stunted by lack of money or profile”. I’ve candidly asked Dominic for his honest appraisal of Hollywood in its current state. The veteran of film, television and theatre has worked all over the world in productions large and small, but in the post-Weinstein, scandal-ridden Hollywood; streets lined with posters for whatever Marvel or DC have pulled out of the archives and re-hashed this month, there’s a noticeably deflated zeitgeist, a lack of enthusiasm and direction from the city and its occupants. But within the confines of his trailer, the mood is noticeably more hopeful than what’s happening in the surrounding buildings.

“That’s the point of the competition, why it’s a really important one; a really worthwhile one that’s at the other end of the industry. To deter the big blockbusters, and turning out stuff that most of us are bored with. The independent sector needs as much help as it can get and I think it’s great when they get a big sponsor like Jameson.

“I always hear how impossible it is to make an independent film and the cheaper the film, the harder it is to make. I don’t really know, but I imagine that it must be doing a lot of good, a competition like this.”

Whether or not it’s helping change the industry might take many years to know, but the good it’s doing for filmmakers like Alice, Jason and Ollie is palpable.

“I was art directing and it was probably going to be a seven-year process for me, to start even becoming a shadow of a director on set” says Alice.

“That was just going to be the process and everyone kind of knew it but ever since going back to work, I’ve already started co-directing with other people. So for me, it’s cut seven years off my redevelopment, which is just invaluable.” 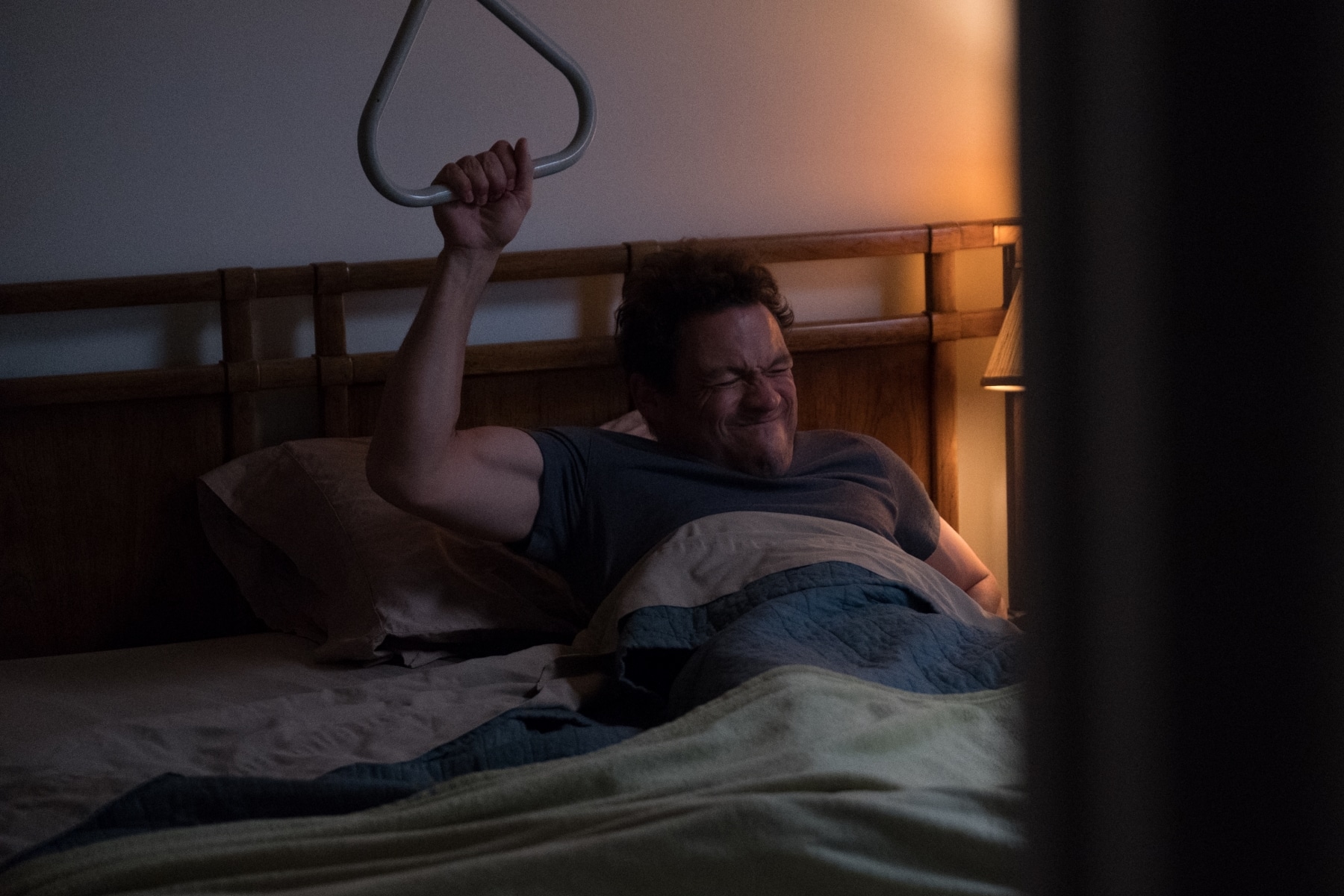 Ollie Wolf knows exactly how it’s set him on a straight path for his future.

“I think the thing that’s really good about this, is it makes you aware of your ability and you can do something. It gives you confidence. It’s like the four-minute mile being broken. This idea that if I want something to happen, I actually can do this.”

Jason, the youngest of the three, who is still in film school and openly confesses he was unsure of what he wanted for his career, adds a different perspective.

“Primarily I wanted to be an actor and really, I think this experience as well as my school experience, taught me that there are many different ways of going about telling different stories. Just being able to get into it and tell your stories however you can, whether you’re an actor, or a director, or a writer. Any of these different facets, it’s really a great thing to be able to be a part of this industry.

“I’m not a very focused individual, but I want to focus more on the directing and writing path as well.” 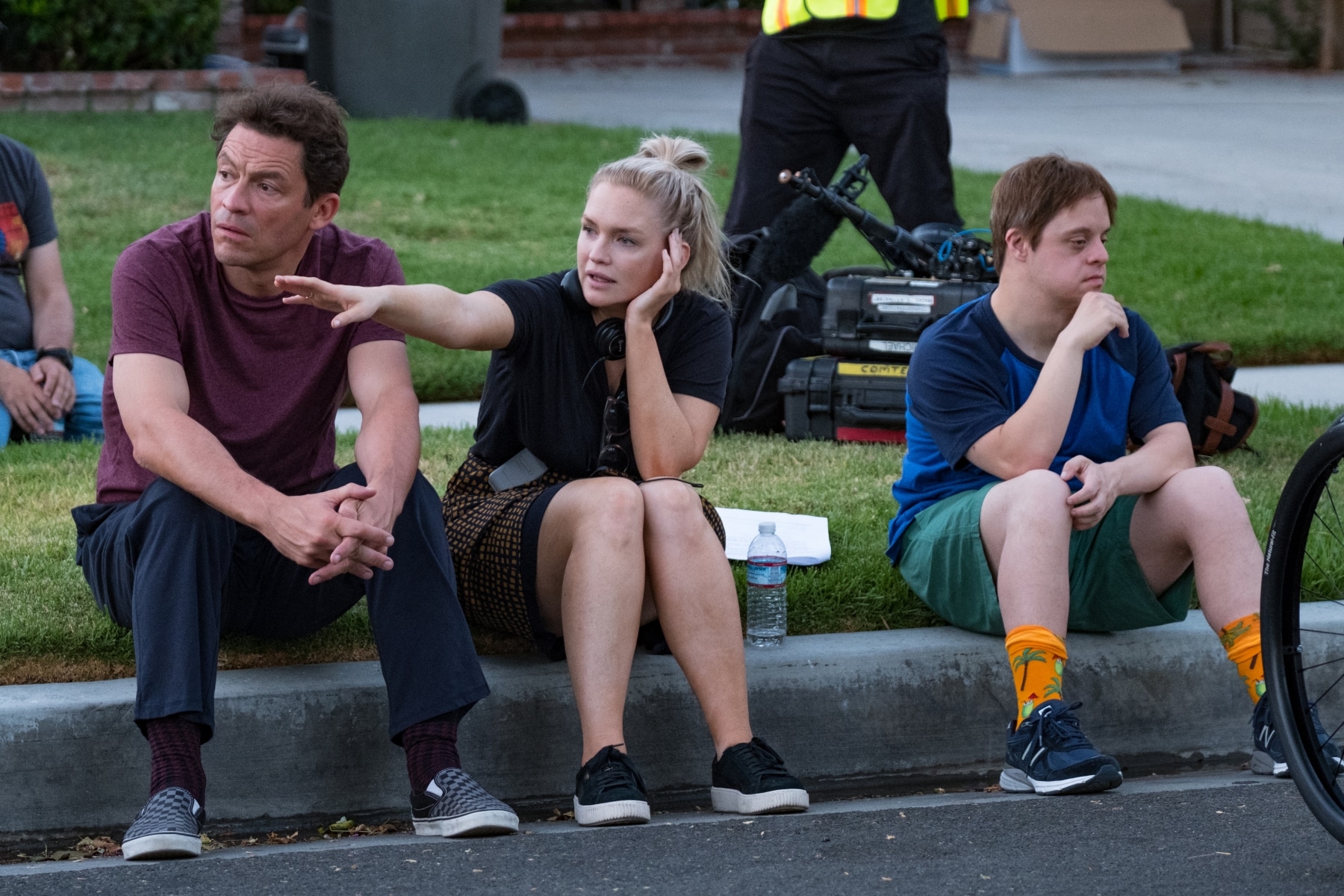 The Jameson First Shot short film competition is unique in that it offers more than just exposure and doesn’t waste time with a cash prize. What it offers is an experience that normally only comes with actually directing a Hollywood production, but deliberately fast-tracked for those who can prove they have the mettle to manage it. Does this, then, plant the seed for the three to, one day, relocate to Tinseltown permanently?

Ollie quite honestly says that he wants to take what he’s learned in Hollywood back to England and do it there. Alice’s answer is expectedly Australian.

“I think I’m going to stay in Sydney. I love LA but its just a lot for me. I like being by the beach and seeing some water. I need it.”

Before ducking back outside to the warm Los Angeles night, I ask Dom if he has anything else to add.

“I have one more joke, but it’s off the record.”

It’s a shame he only knows filthy jokes – the second one was even better.

Man of Many visited LA as a guest of Jameson 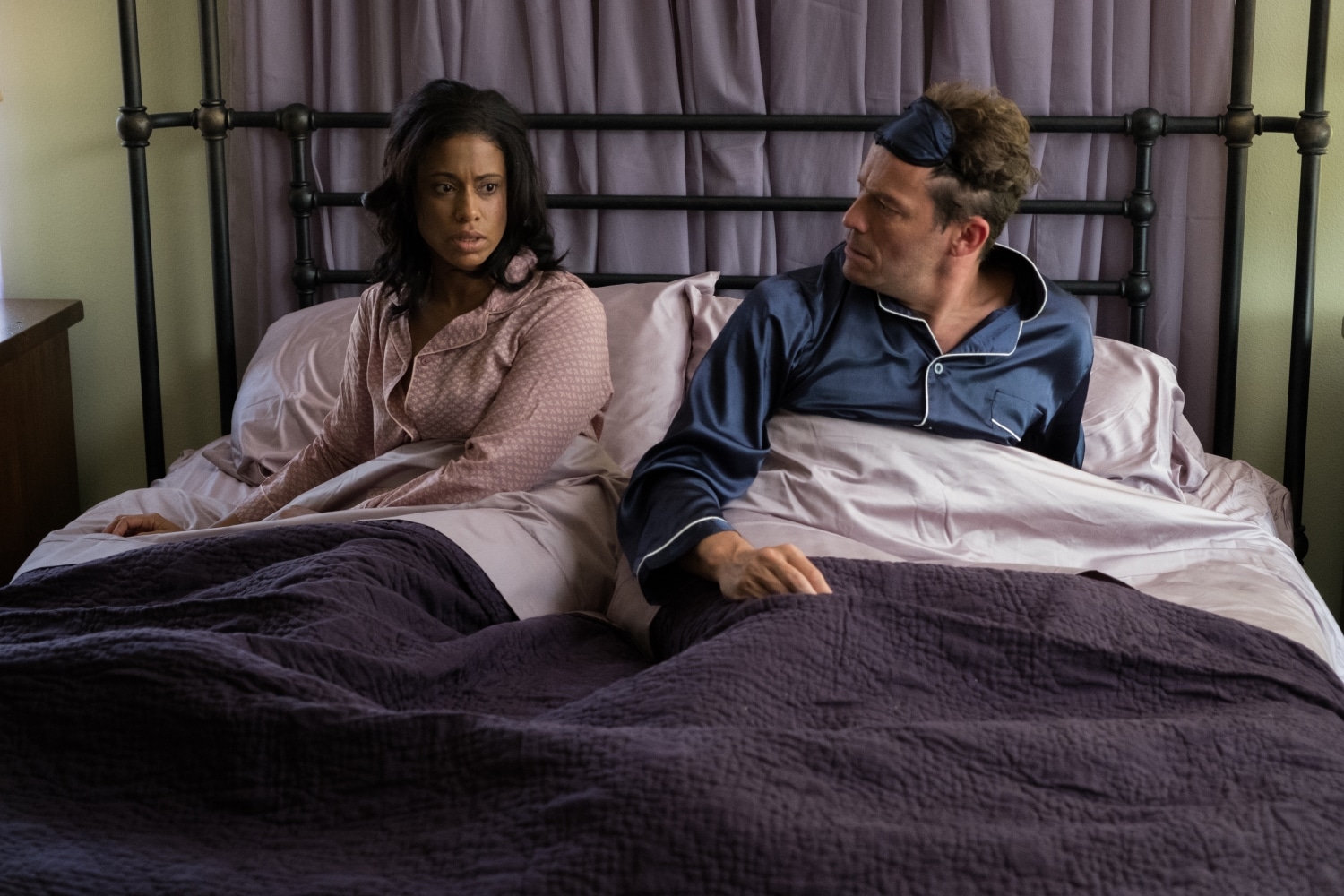 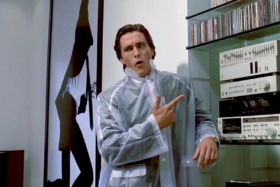 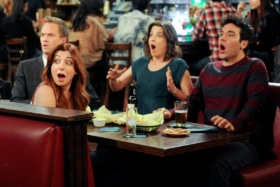 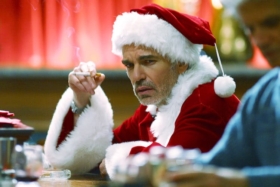