So, the gym is closed and the world is under lockdown, guess that means you’re free to eat whatever you want and avoid working out, right? Wrong. Now is the perfect time to get yourself back into shape by steering clear of the temptations we regularly face in our day-to-day lives. Without the lure of after-work drinks, take-out lunches and hungover dirty bird, your body should really be thriving. But so many of us are using isolation as an excuse to forgo any diet or training responsibilities, which will only lead to heart-ache in the end.

Wouldn’t be great if we used this time to better ourselves? Just image it; if you put the time into working out at home, you can emerge from the quarantine cocoon like the beautiful butterfly bro that you are. It won’t be easy, getting ripped without equipment and with limited area availability can tough, but it isn’t impossible. One person who knows all about working out in confined spaces is Charles Bronson, better known as Britain’s Most Notorious Prisoner. 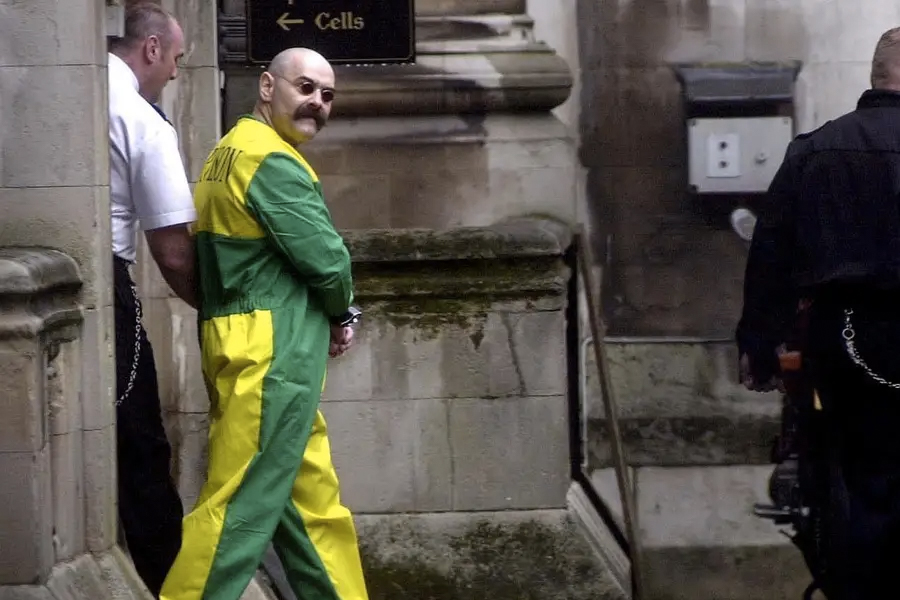 Who is Charles Bronson?

Bronson – who was born Michael Peterson but now uses the name Charles Salvador – was first sentenced to seven years in jail for an armed robbery in 1974. A slate of violent attacks on fellow prisoners and guards prompted that sentence to be extended. He was briefly released, but it didn’t last long; Bronson was convicted for planning another armed robbery and was handed a life sentence in 1999 after taking a prison teacher hostage for almost two days. But despite being best-known as a rough and ready convict who has spent more time in solitary confinement than nearly anyone in Britain, 67-year-old Bronson is also an absolute unit. Tales of his size and strength have taken on an almost-mythical level of notoriety, perpetuated by the man himself.

“I’m the king of the press-ups and the sit-ups. I’ve already said I once did 25 press-ups with two men on my back, and I’ve squatted with three men on my shoulders,” he wrote in his autobiography back in 2000. “I’ve been making prison fitness records for as long as I can remember. Show me another man – a man half my age – who can pick up a full-size snooker table. I can. Show me another guy who can rip out 1,727 press-ups in an hour. I can … I once went eight years without using weights, then I went into a gym and bench pressed 300lb ten times. I’m 5ft 11in, I weigh 220lb and I feel as strong as did when I was 21 … There’s something deep inside me that pushes me on. I’m a solitary fitness survivor.”

So, how does someone who has spent 4/5 of their life in a 12 x 8ft steel box end up stronger and fitter than pretty much anyone on the outside? Lucky for us, old Charlie isn’t averse to handing out his secrets. Back in 2002, Bronson released a book entitled Solitary Fitness, revealing the inner-workings of his bodyweight exercises, jail workout regime and diet. We’ve collated some of his best fitness tips and exercises into the ultimate prison workout guide, perfect for solitary confinement and quarantine lockdown. 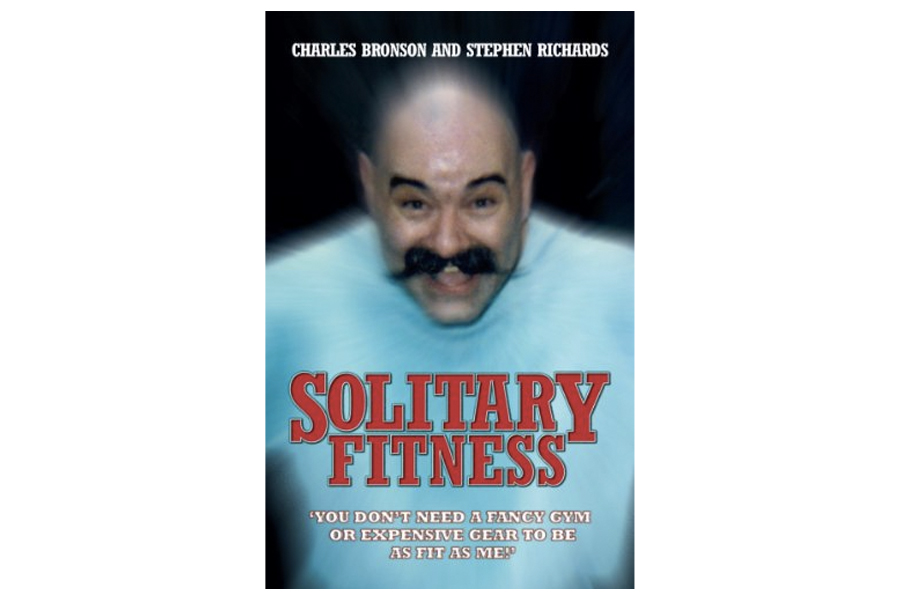 Back in 2008, everybody’s favourite actor Tom Hardy shot to film portraying Bronson in a biopic of the inmate’s life. The meagre male model packed on an estimated 7lb of weight per week in the leadup to filming, eating, training and acting like Charlie. According to Hardy, his transformation was the result of calisthenics derived from ‘convict conditioning’ bodyweight workouts that have been around for years. Like Bronson, Hardy got creative, making the most of limited space and zero equipment to get insanely jacked for the role.

Hardy’s bodyweight workouts were a little bit more manageable and realistic than Charlie’s. After all, the man once picked up a 5kg weight using nothing but his beard. “I almost tore my face off. I had lockjaw for a week after, it tore out half my beard and my neck was like a lump of rock. Pain like never before, but that’s me!”

To save you the pain, we’ve combed through Hardy’s bodyweight workout plan and Charles Bronson’s Solitary Fitness to put together the ultimate bodyweight prison workout to help you get ripped with in isolation. 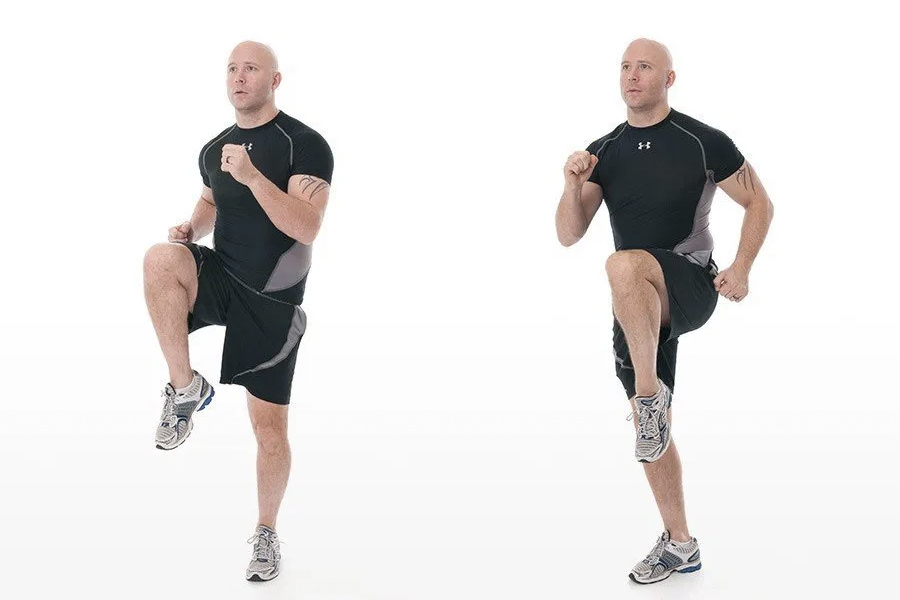 According to Charles Bronson’s workout plan, just because you have limited space or are incarcerated doesn’t negate the need for a good warm-up. He suggests the ideal warm-up session should last from 10 minutes to half an hour. 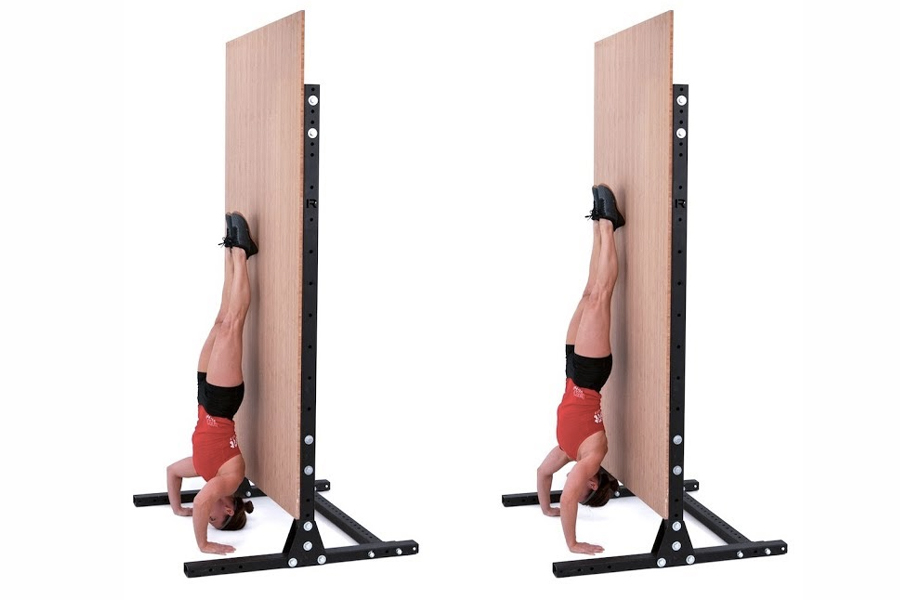 A Charles Bronson favourite, the handstand press-up is one of the more challenging exercises in the ultimate prison workout, but critically important. “I swear by them. Over the years, I have probably done billions of them, but each session gets better. Basically, with a press-up, it’s all in the technique,” he says. 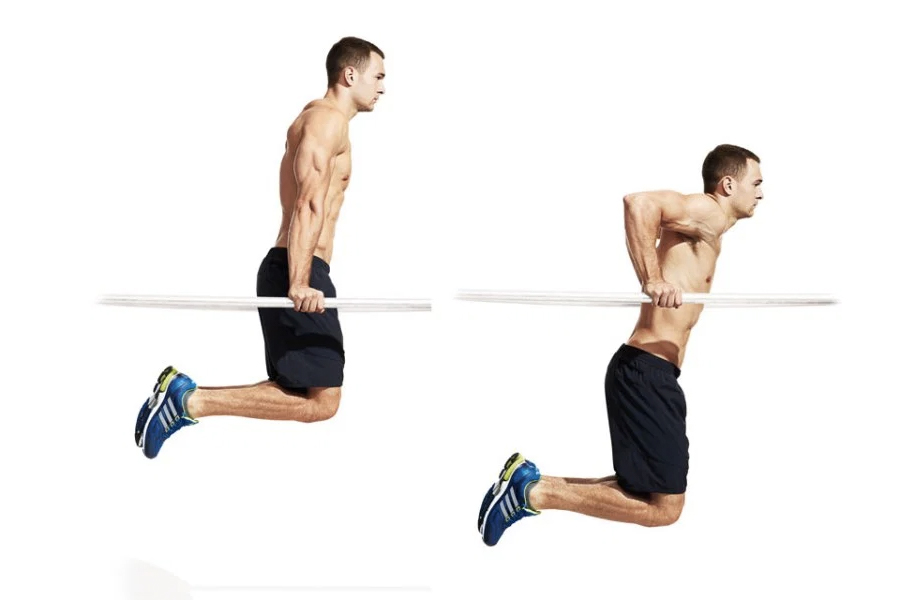 One of the most basic exercises in the prison workout guide, dips are a highly effective way to build chest muscles. In Solitary Fitness, Bronson reveals he has had a long love affair with the movement. “I used to do this one holding my son Mike when he was two years old. He’s 35 now, so I don’t think I’ll try it again,” he wrote. “Remember, it’s not about speed – all these exercises should be done slowly, using lots of control. This one is pure dynamic tension. I guarantee a month of these and you’ll put two inches on your chest. I do 100 with a chair; after 100, you’ll have a puddle of sweat on the floor. It’s brilliant.”

To perform dips at home; 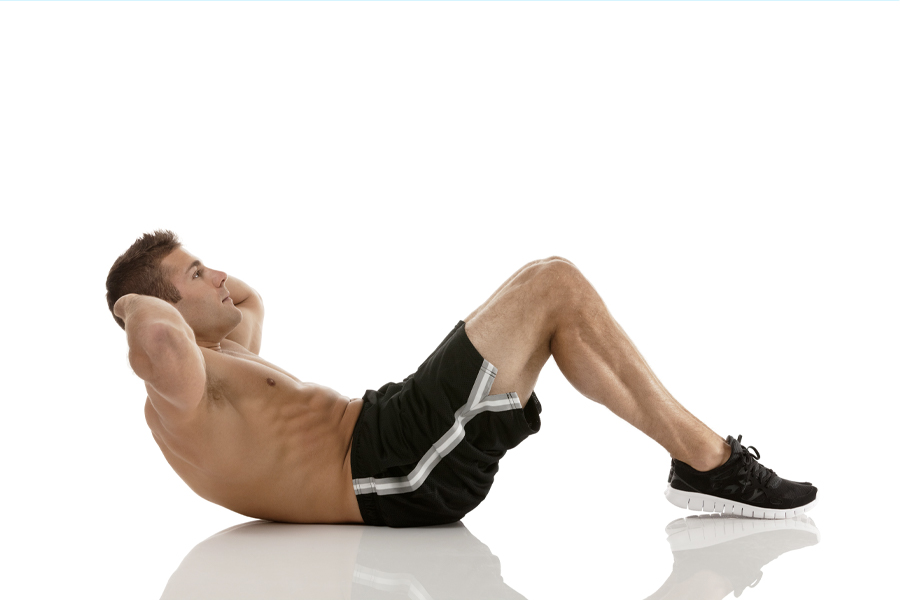 We all know how to do a sit-up, but there are a number of different variations on the iconic movement. According to Charlie, the style of sit-up has little bearing on the final result in this bodyweight workout. “There are dozens of variations of sit-ups, but basically they all do the biz,” he wrote. “My favourite is ‘the crunches’; feel on chair, hands on back of head, and go!”

While sit-ups are obviously good for bringing those abs out, Bronson has another reason for developing on your core. “I ask you, how will you be if someone punches you in the stomach? Well, isn’t it nice to be able to smile and say, ‘Err … can’t you hit any harder than that?’ Your belly (abdomen) is your centre: if you harden up there, it will take you through a lot of problems later.” To execute; 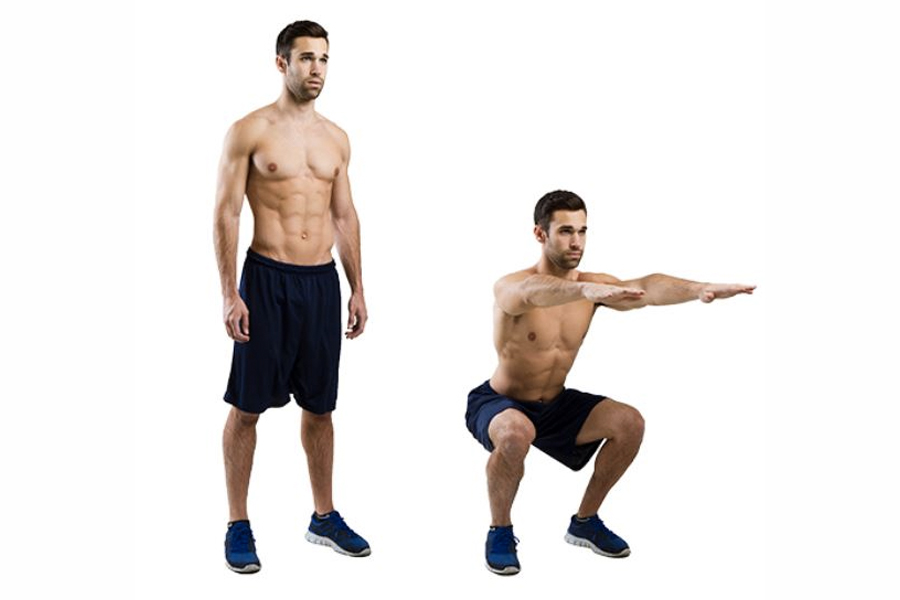 One of the most important exercises for any fitness regime, at-home or otherwise, squats must be incorporated into your bodyweight workout plan. While the gyms are closed, it can hard to find barbells and weights to up your strength, so you might have to rely on your friends and housemates. “When I’m lucky enough to mix with my fellow cons, I often squat with one of them on my back as it’s good for balance and strengthens up the back as well as the legs,” Bronson wrote. When you’re alone, start with some pillows from your bed, a chair or a bench. “First, just do your ten. When you do ten with a chair, go for 30 – if not more – without a chair. Hell, why not 50 or even 100? There is no excuse for anybody in the Bronson workout.” To execute; 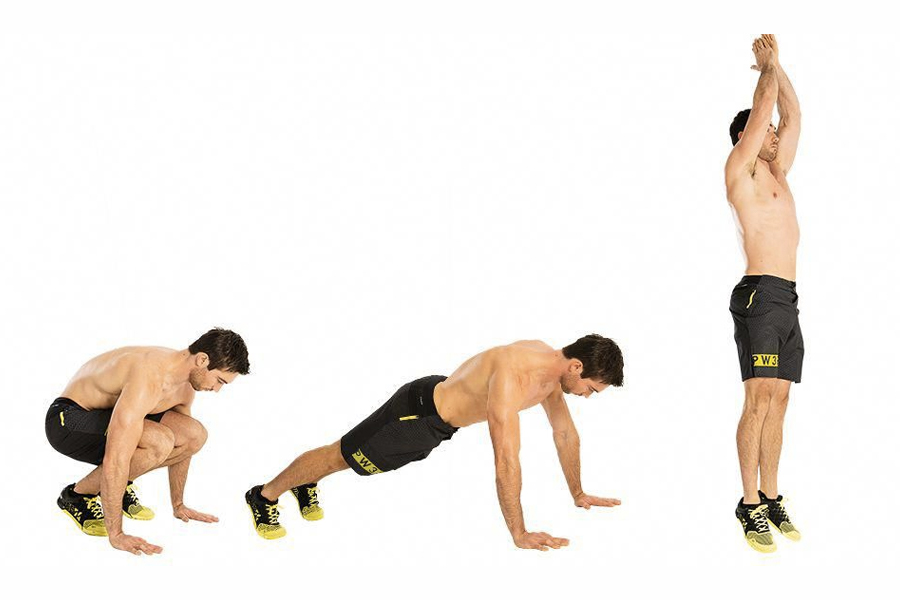 Another good heart-pumper, burpees are a favourite of cross-fitters, functional fitness and bodyweight workout fanatics alike. Bronson said they are a great exercise for stamina and strength. “You need to do these sorts of exercises simply as it’s all-round fitness; it pushes you, you’ll be puffing and panting and sweating, but it’s all for your own benefit, so don’t cheat: do it and enjoy it. You’ll get faster as time goes on until you have it perfected. The average man in the street can do five without speeding up, so, when you get up to 50, be proud of yourself!” 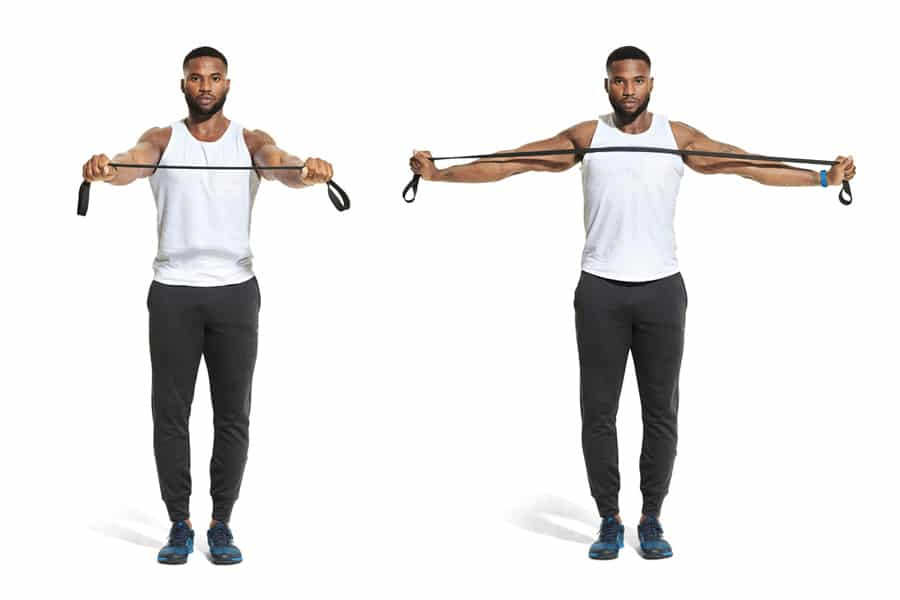 “Here’s an exercise to build muscle. No weights needed,” Bronson writes in Solitary Fitness. “Get a towel, vest or whatever (ideally a material that is stretchy, but not nylon as this could burn your hands or create static within your body). If I’ve no towel or shirt (often I will be in solitary confinement and have nothing, just a bare cell), I still do it with my fingers entwined, pulling hard and then relaxing, it’s the same principle.” To perform a band pull-apart; 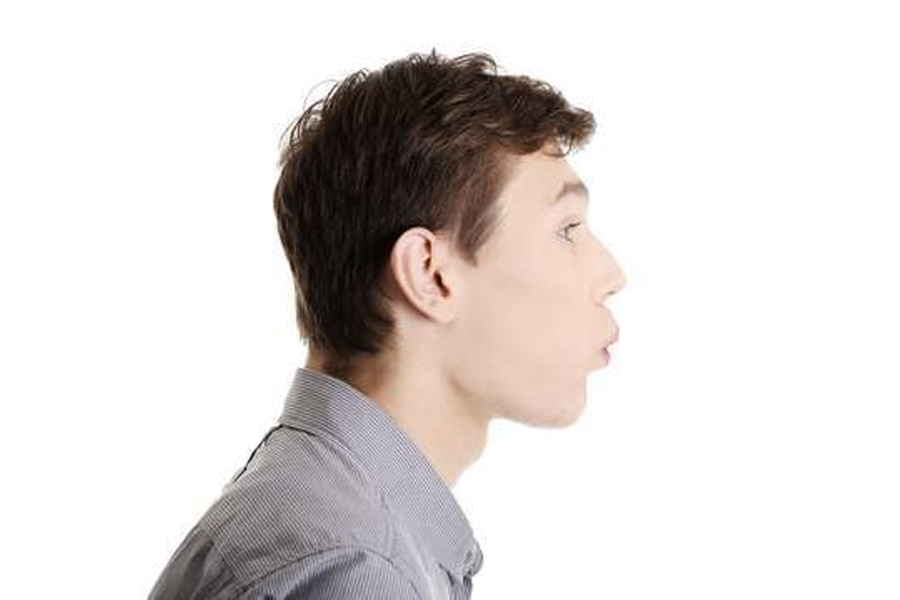 Every gym junkie knows the importance of doing sit-ups and crunches, but there are other ways to get rock-hard abs that don’t involve getting down on the ground. “Your abdominal muscles are very, very important,” Bronson writes in Solitary Fitness. “They’re not there for flashing off by showing a six-pack, they’re there to help ward off all sorts of diseases. If, in the end, you develop a six-pack then that’s just a spin-off benefit.”

This is one of the strangest exercises in Charles Bronson’ prison workout guide. It actually feels like you aren’t doing anything at all, and then suddenly, you’re gassed. Here’s how you perform the ab exhale, as instructed by Charlie himself;

Now, this exercise is no doubt going to blow you away, but Charlie reckons there is no shame in tapping out. “If you feel faint then have a sit down, don’t be a hero. I pump out 100 of these without a gap. Once my lungs are full, I give it some more. What it does – You will feel all sorts of things going on in your throat, chest, lungs and abdominal muscles, even your back will tingle, but primarily this will give you abdominal strength.” 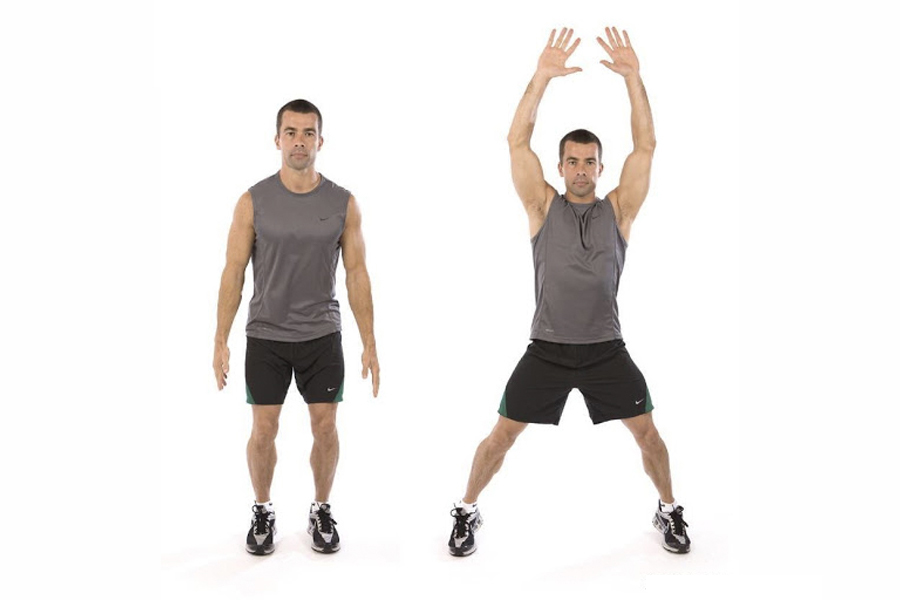 Just the thought of Charles Bronson alone in his solitary confinement cell pumping out star jumps is a strange vision, but don’t let the image fool you, star jumps are a great example of cardio and strength movements working together. This is a simple addition to your bodyweight workout plan that is proven to keep you trim. Here’s how Charlie does it;

“The star jump is a good all-round exercise,” he writes. “If you’re lucky enough to be able to do it on the grass or a nice sandy beach, then I envy you; it’s not a lot of fun doing it on concrete. Would you believe, it’s years and years since I walked on grass? The only time I see grass is through a security van window when I’m moved from one max-secure unit to another.” 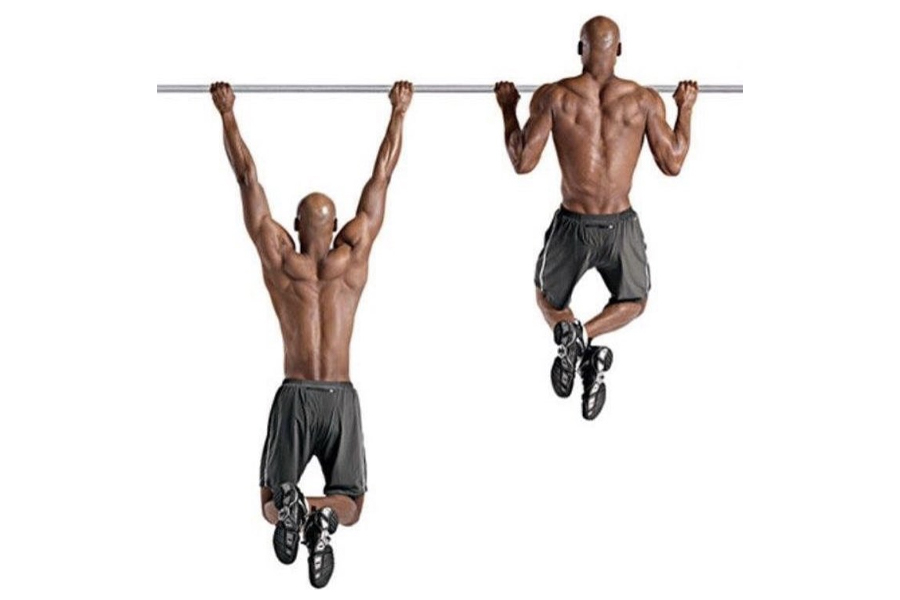 As far as bodyweight exercises and prison workouts go, there aren’t many that build significant muscle tone. That’s where the old wide-grip pull-up comes in handy. Here’s how to do it: 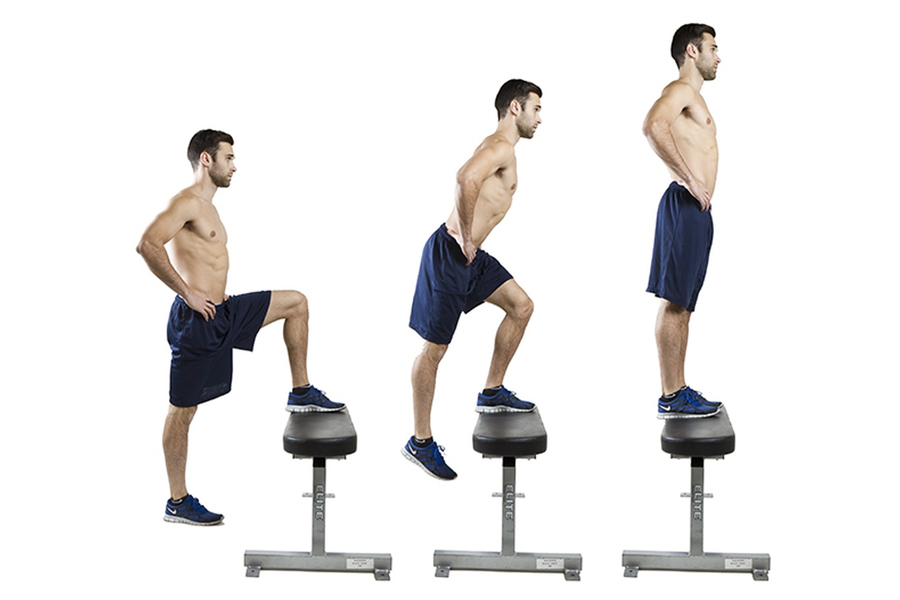 This one is one of Bronson’s favourites. According to Solitary Fitness, he performs hundreds, if not thousands every day using the bed in his cell as a step-up box. If you’ve got a chair or small stool, that should do the trick. Here’s how to do it: 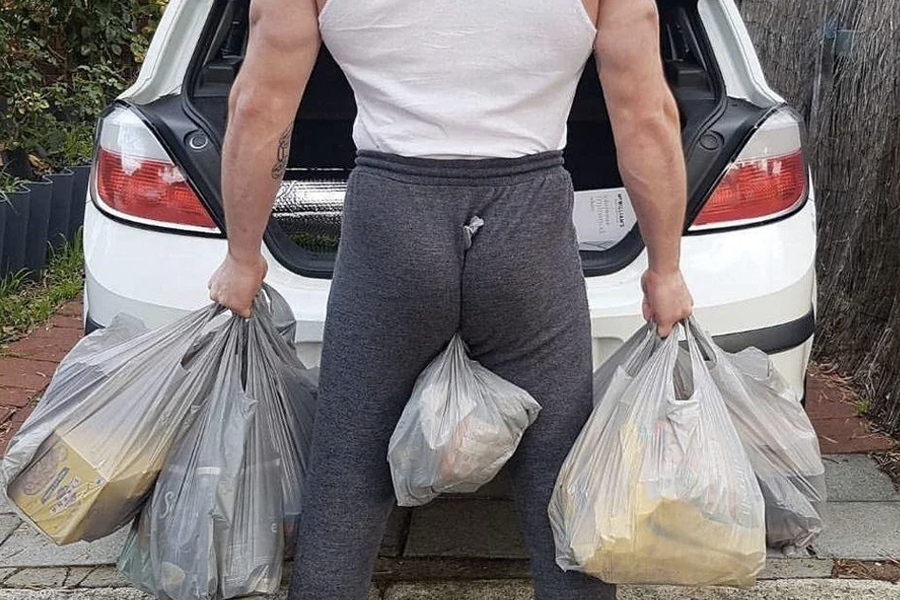 The ultimate prison workout doesn’t skimp on anything, not even your anus. One of Charlie’s favourite exercises is the butt clench.

Reps: Til failure
Sets: 1
Rest: As long as needed

The best part about Charles Bronson’s ultimate prison workout is that the exercises require no equipment and are super easy to complete, just ask Charlie himself. “They are so simple to do. You can do them anywhere, any time you choose, and it’s a great way to relieve tension or stress. Sure, you can always have a wank to relieve tension, but why be a wanker when you can be a super-fit person?”

What is the best bodyweight exercise for muscle growth?

The best bodyweight exercises for muscle growth are pull-ups, push-ups and dips.

What is the best no-equipment legs exercise?

While weighted squats are an obvious choice, doing step-ups on a bench or chair will also be highly valuable.

Prison workouts are effective but not in the same way traditional strength training is. You are less likely to build significant muscle tissue using only bodyweight exercises. 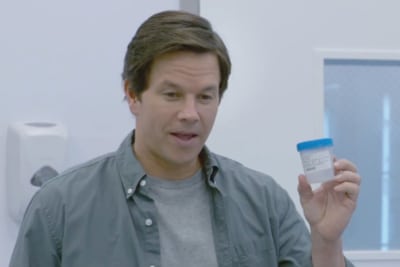 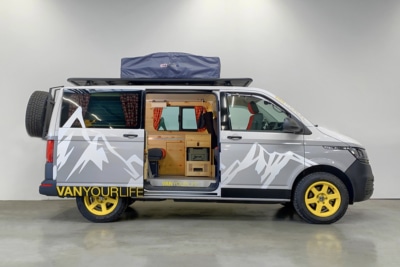 Camping
Flowcamper Casper is the VW Kombi for the 21st Century 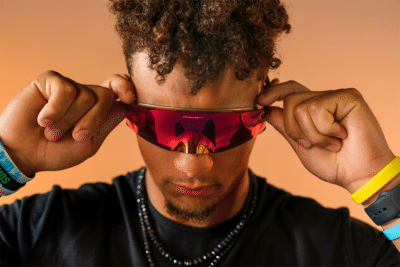 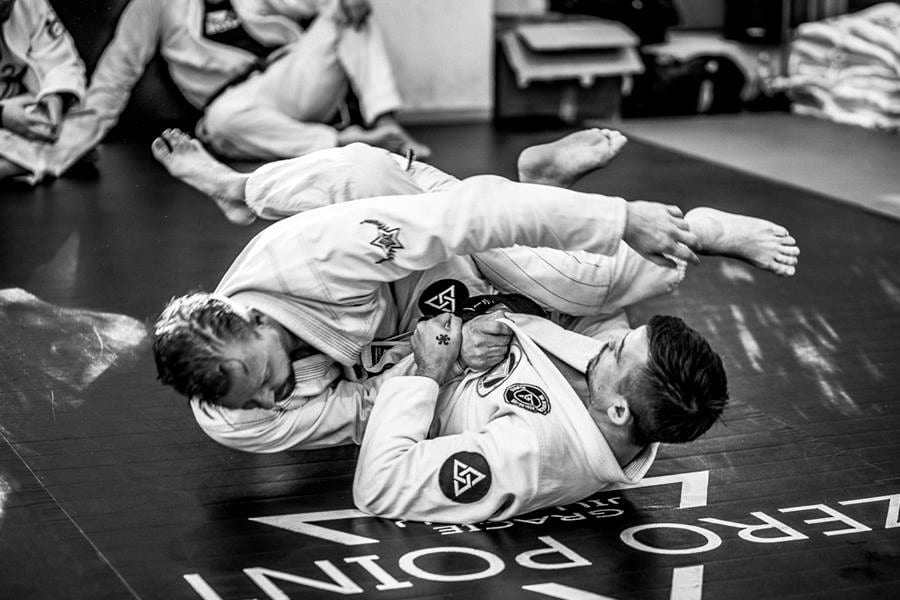 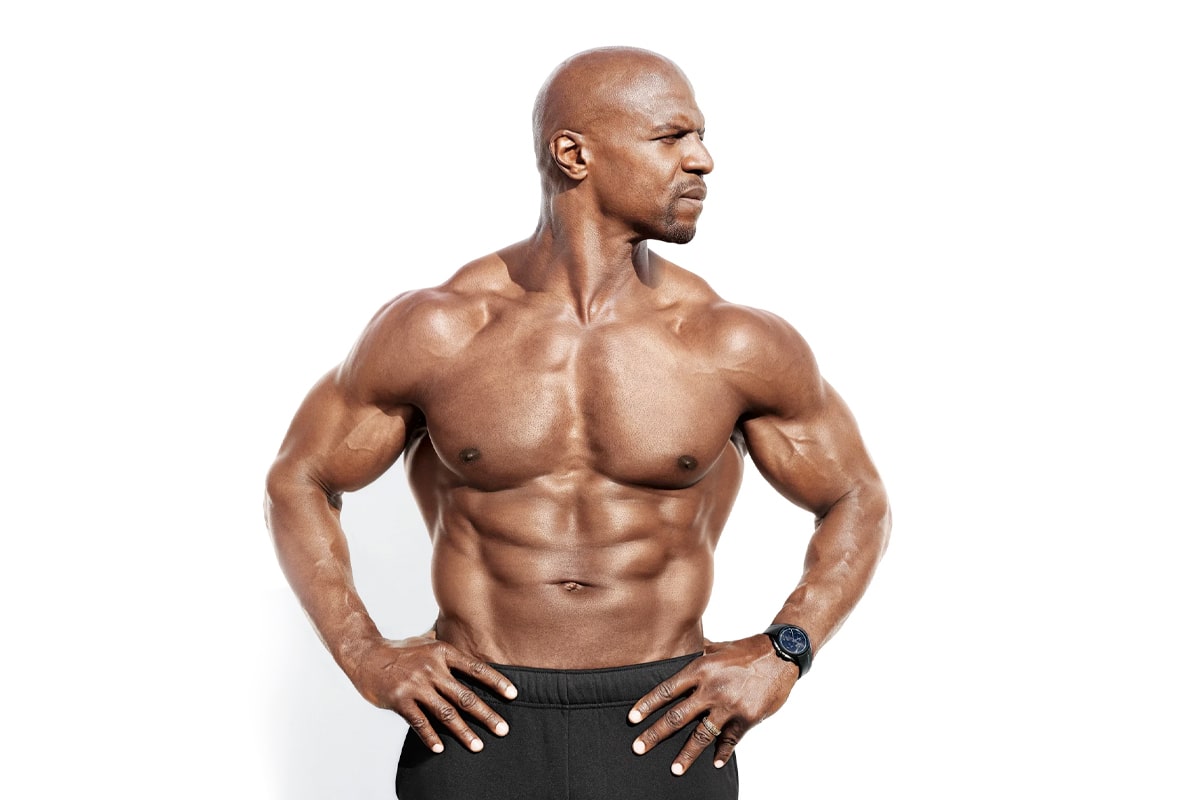 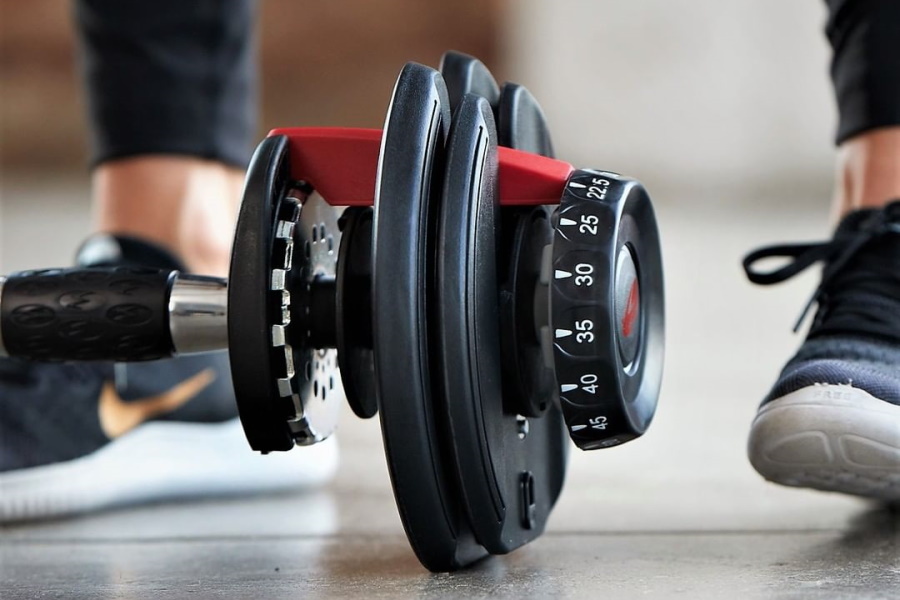 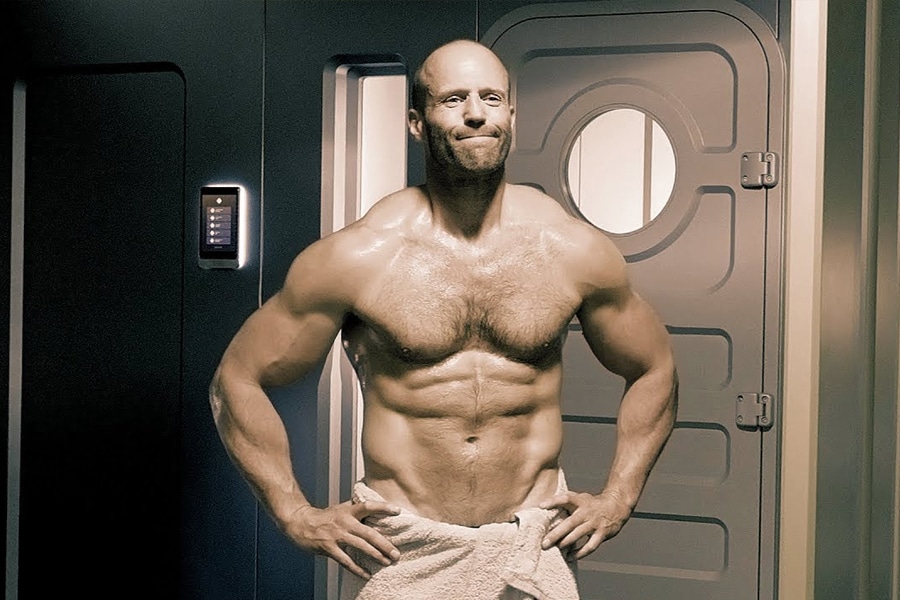