Action movies are as much a fixture on the American psyche as hot dogs and muscle cars; Elvis and baby Jesus. And Hollywood knows all too well the winning formula that’ll put bums on seats and dollars through opening weekend coffers. Angel Has Fallen, the latest instalment in the “… Has Fallen” series of films, follows this formula to a T, and, for the most part, does it well.

Speaking to Man of Many via telephone from LA last week, esteemed actor Morgan Freeman was kind enough to offer his own insight into what exactly makes the action genre such an event for US audiences in particular: “You know what, I think that action films have always been entertaining. They take you so far out of your normal everyday, dull, life. And we get to live vicariously as bad guys or heroes. 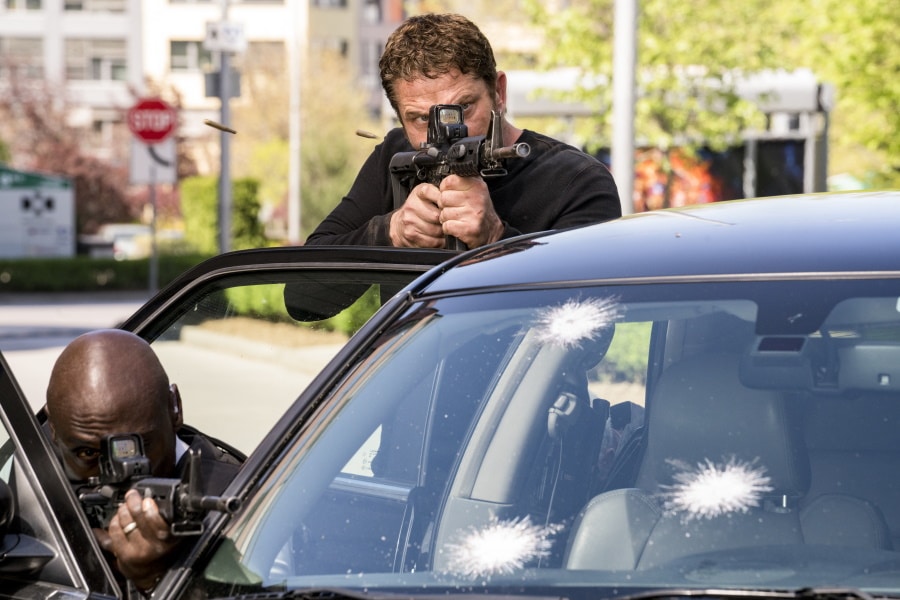 “I think we all almost always agree, I mean, associate ourselves with one or the other. And sometimes I’ve seen movies and end up pulling for the bad guy.

“Most of the time you’re pulling for the good guy,” he pointedly adds.

Freeman, now 82, is ubiquitous in terms of cinematic visibility. Having charmed audiences for decades on both stage and screen, his career shows no signs of slowing down. In fact, at an age where most would retire (I put it to Freeman that more than a few in his chosen career die young, too) or shy away from roles that require a degree of physicality, Freeman seems as keen as ever to dart into the fray. 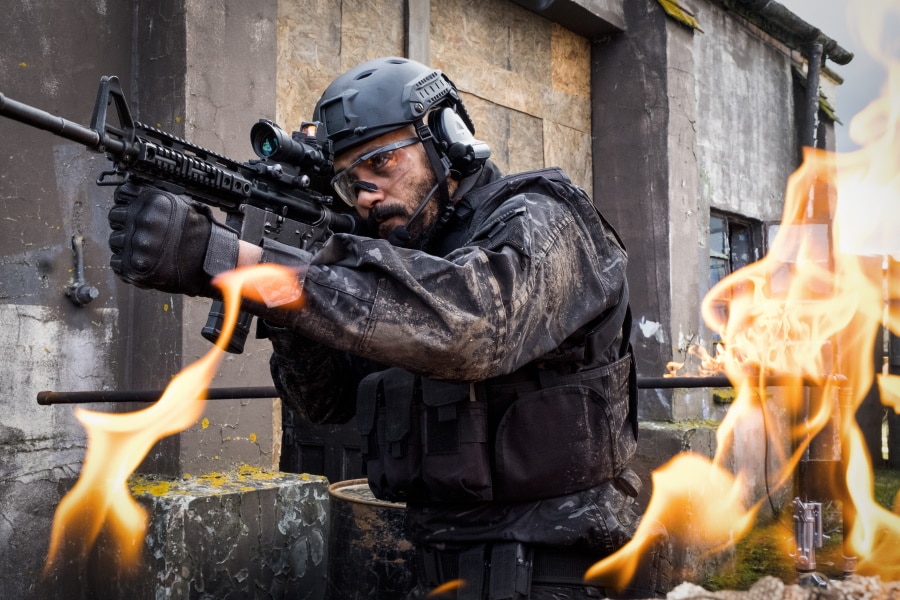 His character, Allan Trumbull, was Vice President of the United States in the past two iterations, Olympus Has Fallen and London Has Fallen, but finds himself in the oval office for the third film. Having previously portrayed Nelson Mandela and God, Freeman is hardly new to roles with a certain level of gravitas–“I’ve been watching. presidents ever since FDR. They’re all different, so you don’t have to try to imitate one,” he quips.

As far as reprising the role for the third time, his answer is more matter of fact: “There is no reason not to reprise a role. Number one, they’re paying you well. And number two, the first two were pretty successful. So there’s no reason. “Particularly if you’ve got a, what is, I would consider, an even better script. A better storyline. Better, deeper characterisations.”

His unmistakably rich voice, which has been used for countless TV advertisements and documentary voiceovers, rings down the phone line just as though he were reading lines, and when pressed on how he chooses a role, it’s easy to understand just how much the line between “profession” and “lifestyle” is blurred for what is certainly one of Hollywood’s most respected. “Well, it’s a profession. It’s what I do,” he matter-of-factly utters. 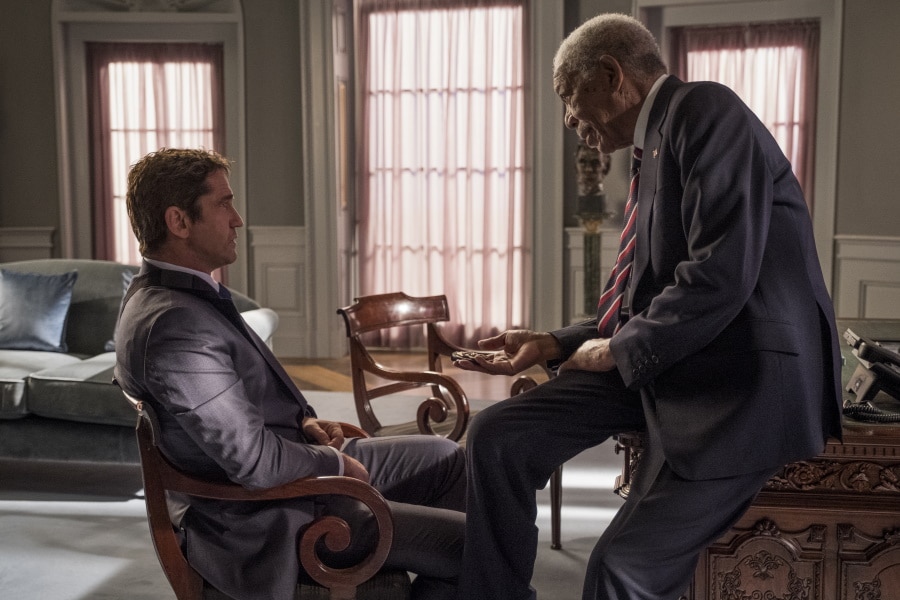 “When I get the opportunity to do it and I think that it’s worth doing … I’ve been here long enough now to be able to make that sort of assertation–if it’s worth doing to me. Then, yeah. That’s what I’m here for.”

Angel Has Fallen sees an ageing Gerard Butler, addicted to painkillers, and his job, return as Secret Service agent Mike Banning. Charged with personally protecting the President, the classic undertones of trust and betrayal, interwoven with explosions and gunfire, make for an entertaining couple of hours.

And while it may not be Oscar-winning material, the star-studded cast members (Jada Pinkett Smith, Piper Perabo, Lance Reddick, Tim Blake Nelson and Danny Huston join Butler and Freeman on-screen) play their parts well, ticking the requisite boxes that will make a film commercially successful, eschewing five-star reviews for box-office success, as was the case with its predecessors.

The only comic relief of which to speak during the film comes from the inimitable Nick Nolte as Banning’s estranged father Clay–a near-reprisal of his brilliant portrayal of fictional fraudster “Four Leaf” Tayback in 2008’s brilliant Tropic Thunder. The conspiratorially-affixed, ex-Vietnam madman trope is overplayed, but Nolte is good at this, so it works. 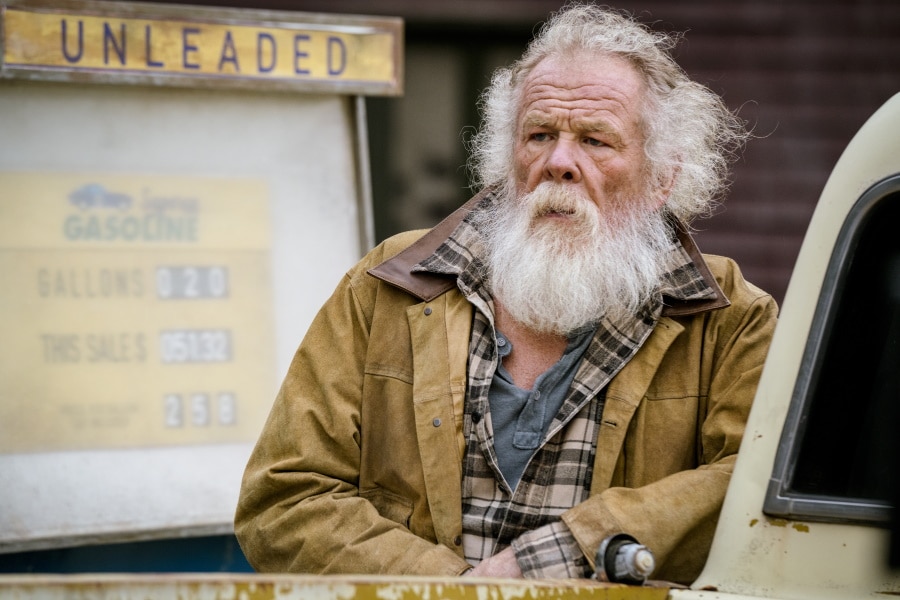 And the laughter is a welcome refreshment from the relentless violence endemic to such a film.

On finally being presented with the fact that having played Nelson Mandela, The US President and God, he must surely be running out of roles, he is the consummate Hollywood professional, and proves that he may indeed be one of the least egoistic men to ever dominate the silver screen–“I don’t know!” he laughs.

“It’s all in the hands of the writers.”

Angel Has Fallen is currently playing in cinemas.