The layers are slowly being peeled back on Netflix‘s super-sized whodunnit Glass Onion: A Knives Out Mystery. Overnight, the streamer dropped a new full-length trailer for the Daniel Craig-led murder mystery film, giving more insight into the beleaguered fate of the ensemble cast and revealing just who among them could be a killer. With Benoit Blanc back on the case in an entirely new setting, the Knives Out sequel looks bigger and better than ever. Bring it on. 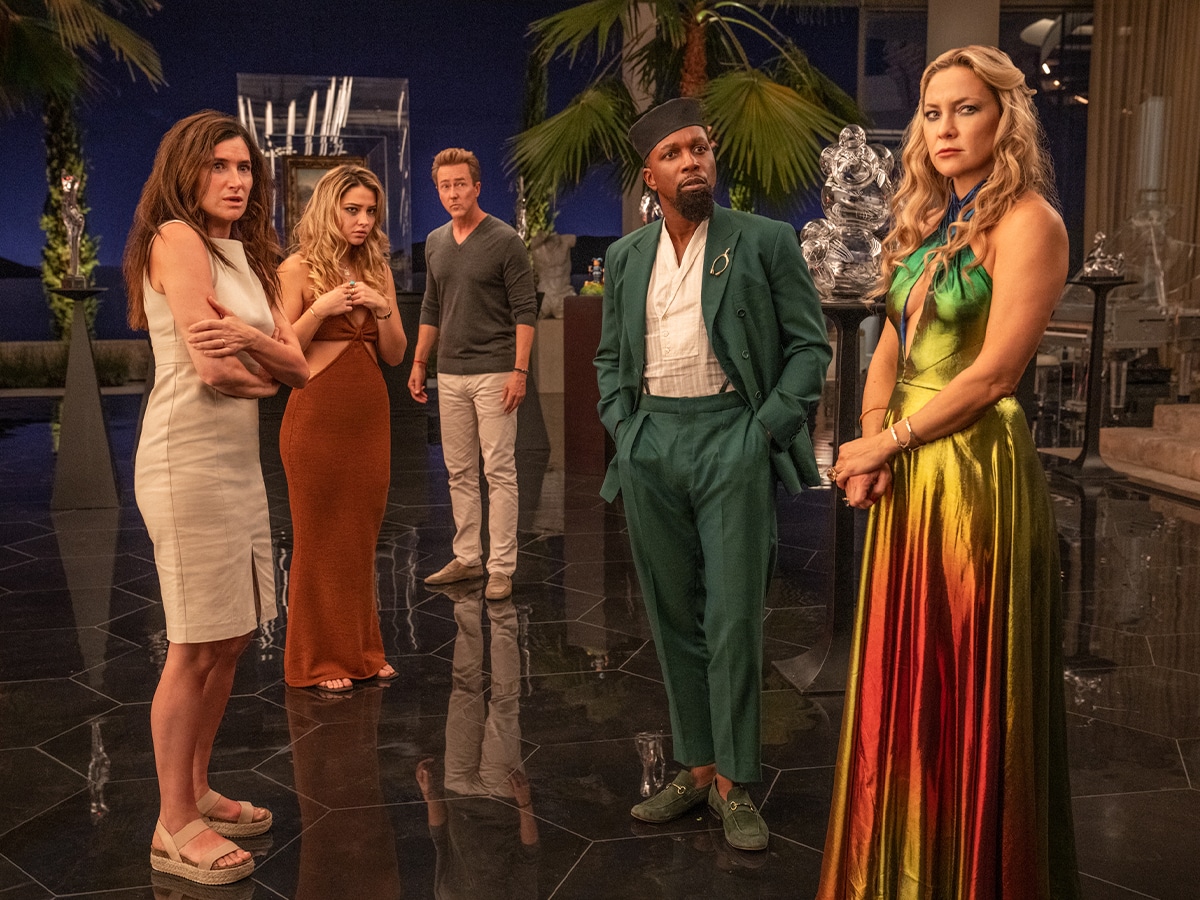 Arriving from the mind of acclaimed filmmaker Rian Johnson, Glass Onion: A Knives Out Mystery follows Daniel Craig’s iconic detective as he attempts to unpack a new crime. While it’s similar in format to the Chris Evans and Ana de Armas hit from 2019, this time around, Blanc has swapped the creepy mansion locale for a spritely summer scene on a Grecian beach. Here, we find the master of deduction unleashed on a team of squabbling guests, trapped on an exotic private island owned by tech billionaire Miles Bron.

Bron is played expertly by Fight Club favourite Edward Norton, landing somewhere between budding crypto bro and finance foe, however, his reign at the top begins to crumble when one of his guests winds up dead. As is usually the case, everyone is a suspect and Benoit Blanc is able to unravel the layers of intrigue to get to the truth. With an ensemble cast that includes Janelle Monáe, Kathryn Hahn (Private Life), Leslie Odom Jr., Jessica Henwick (The Gray Man), Madelyn Cline (Outer Banks), with Kate Hudson, and Dave Bautista (Army of the Dead), the new instalment isn’t short on star power. In the latest trailer, Netflix has finally given a bit of background into the diverse cast of characters, revealing their own unique motivations for being there. Among the suspects, we see a YouTube sensation, a fashion mogul, and a senate hopeful all under Blanc’s microscope, but just who is the killer remains anyone’s guess.

“They’re all performing,” writer and director Johnson told Netflix. “They’re all operating in an elevated way. It’s not a family in the middle of New England working their stuff out. These are people who are all making their living, whether it’s as politicians or as rock star scientists, or as fashion magnates.”

While the characters are certainly bigger and bolder than we saw in the original Knives Out, the star of the show continues to be Daniel Craig‘s meticulous Southern detective. According to Johnson, working with the former James Bond actor was a thrilling experience that reinvigorated his love for the genre, stating “To have a continuing working relationship with one of the best actors on the planet who’s also a completely lovely guy… I’d be a fool to not jump at that opportunity.”

Thankfully, the feeling is mutual. Craig revealed that his experience filming the original Knives Out made the decision to step back into the role of the detective extraordinaire with the over-the-top accent was a “no-brainer”. “We had such an amazing cast in the last one and I didn’t know how we were going to top that, but we’ve equalled it. The working experience, just to come on set and make these movies, is such fun.” 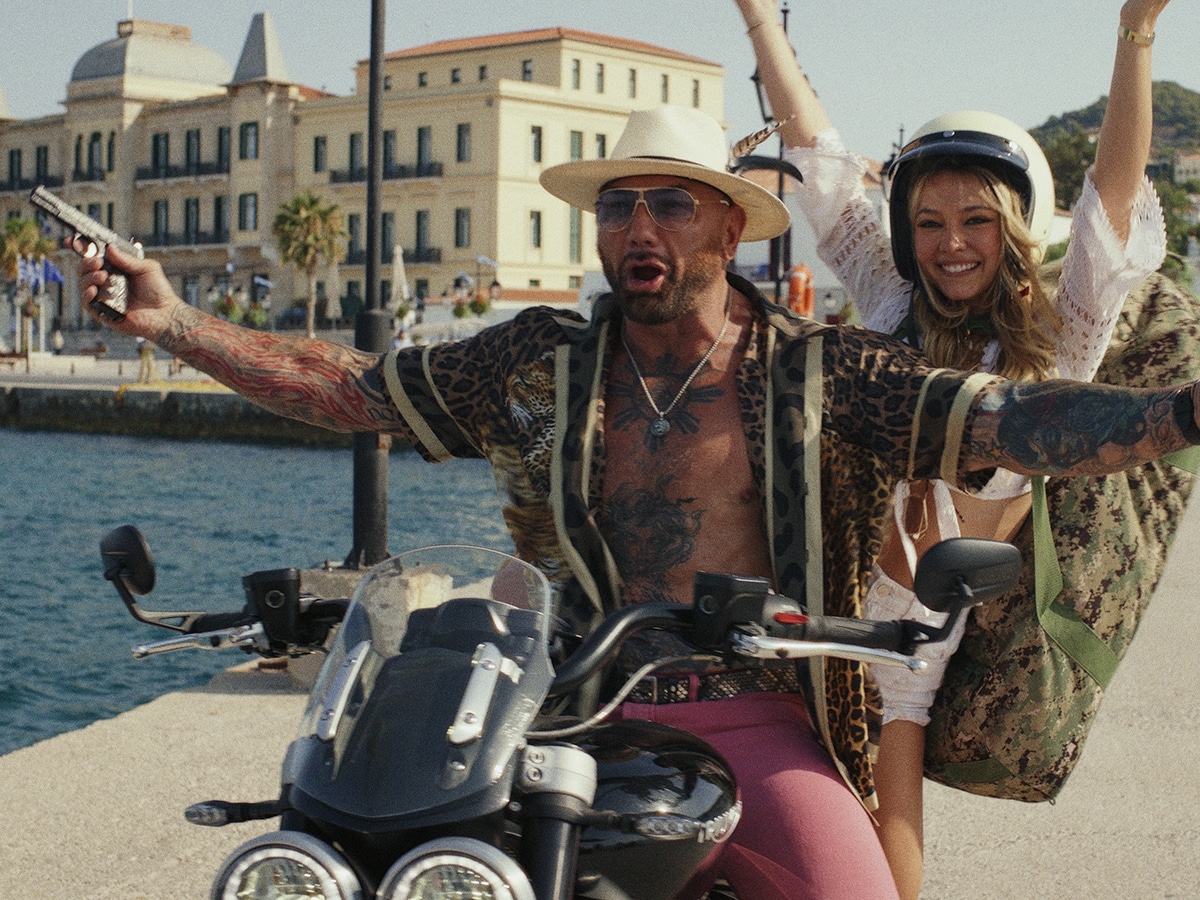 Dave Bautista as Duke and Madelyn Cline as Whiskey in ‘Glass Onion: A Knives Out Mystery’ (2022) | Image: Netflix

It’s no secret that Glass Onion is being tapped as Netflix’s biggest film ever. After receiving a swathe of positive reviews at the Toronto International Film Festival, the streamer is banking on Benoit Blanc to build a brand-new film universe. The platform secured Daniel Craig for two sequels with an eye-watering contract figure, while writer and director, Rian Johnson is onboard as part of a staggering $450 million deal with Netflix.

With the early reviews critically praising the film for both its dedication to the mystery genre and stellar acting performances, Glass Onion: A Knives Out Mystery could set the scene for a dominating on-screen franchise. Perhaps most interesting of all, the film will mark the final appearances of Broadway legend Stephen Sondheim and Murder, She Wrote star Angela Landsbury on the silver screen, both of who passed away within the last year.

Despite being a Netflix exclusive, Glass Onion: A Knives Out Mystery will hit cinemas for a week-long sneak-preview event from November 23 to 29 before heading to the small screen one month later, on December 23. For more information on the blockbuster new film, check out the link below.