He might be history’s most reluctant action star, but if you had to pull off the Daniel Craig workout plan and diet for each Bond instalment, you might be a little reluctant too. Oh wait, you want to pull off the Daniel Craig workout and diet, otherwise, you wouldn’t be here. We imagine you wouldn’t hesitate to take on the role of James Bond, either. The bad news is that we can’t land you the coveted part. The good news is that we can dispense with some of Daniel Craig’s workout and diet plan secrets. 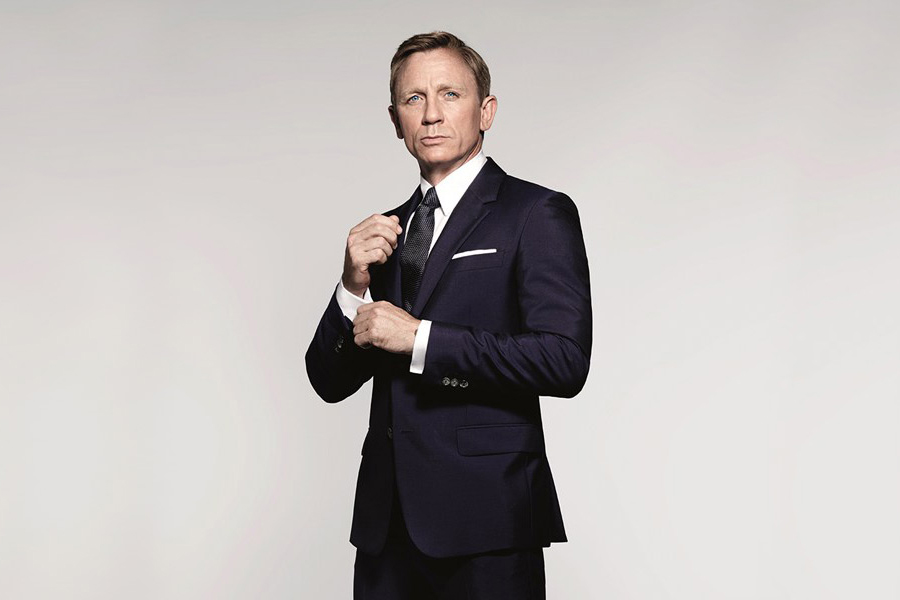 For those who have been living under a rock for the past two decades, Daniel Craig ranks among Hollywood’s biggest stars, namely for his recurring role in the James Bond franchise. From “Casino Royale” through to “Skyfall” and up to “Bond 25,” the actor continues to infuse a new tier of seriousness into the character, rarely cracking a smile as he squares off against enemies or seduces the ladies. He’s also the most physically fit Bond to date, flexing the kind of muscles that make his predecessors look downright lackadaisical by comparison. That’s probably a good thing for Craig, given all the injuries he’s sustained while shooting these films.

How does he do it, one might ask? Today, you’re going to find out. Consolidating fitness routines from movies like “Skyfall” and the upcoming “Bond 25,” we present the Daniel Craig James Bond workout and diet plan. Spoiler alert: prepare to give up smoking just like the actor did. You can also expect a drastic carb reduction along with some intense bodybuilding exercises. Give it your best and you just might be the next James Bond. Or not. Okay, definitely not. Nevertheless, it’s important to stay in shape and this is one solid way to get it done. 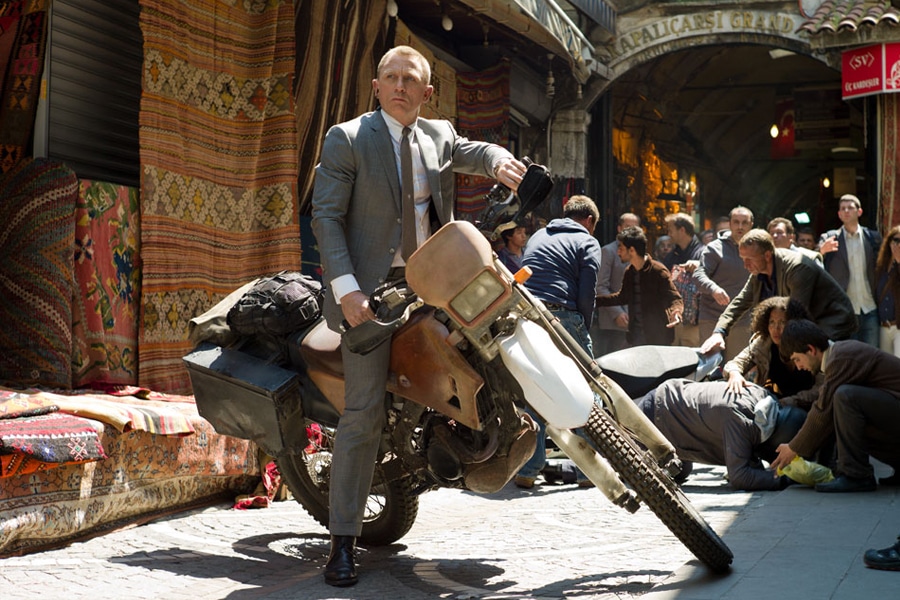 It should come as a surprise to exactly no one that the James Bond diet involves decreasing body fat while increasing muscle. For 51-year-old Daniel Craig, that meant cutting down on the carbs and unhealthy fats and loading up on both natural and supplemental proteins. He also quits smoking every time he prepares for a new franchise instalment and limits his alcohol intake to just two nights per week. Sure, he could go completely dry, but that would be somewhat out of sync with the part. Let’s call it ongoing research for a character who famously prefers his martinis “shaken, not stirred.”

Ready for another no-brainer? Craig eliminated all the junk food from his diet. Should you want to cut yourself in his mould, you should similarly throw out the Doritos, Snickers bars, cookies, donuts, or whatever else it is you binge on after coming home from the pub at two in the morning. In their place, pick up the fruits, veggies, eggs, fish, chicken, and protein shakes.

By the way, what are you doing out at the pub until two in the morning? Are you trying to get into shape or not? We just knew you’d run with that whole “two nights of drinking per week” thing. For the sake of staying on task, let’s assume that Craig has maybe a drink or two during his cheat nights. Consider doing the same, if not going completely dry as you whip yourself into a mean muscle machine. 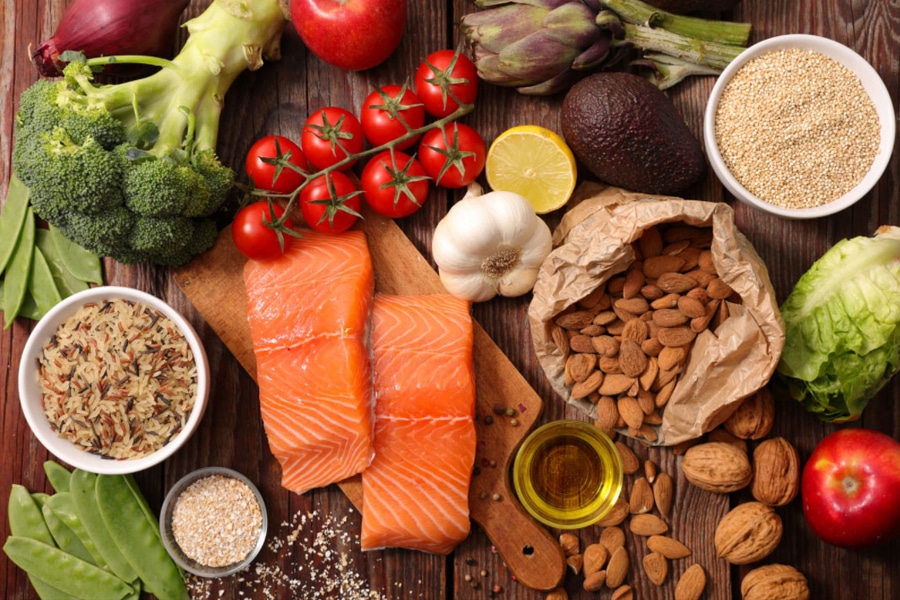 At the height of his training routine, Daniel Craig ate about 5-6 relatively light meals a day. In turn, he kept that metabolism motor running, while furthermore giving himself plenty of fuel to burn off at the gym. The results pretty much speak for themselves, as anyone who’s seen movies like “Skyfall” or “Quantum of Solace” can attest.

Eggs and Toast – James Bond (i.e. Daniel Craig) reportedly takes his eggs poached, not fried. He eats two of them for breakfast along with two slices of toast. Should you do the same, consider putting down the white bread and picking up the whole grain instead.

Protein Shake – All it takes is a quick stroll through the nearest weight room to hear pretty much everything you need to know about the benefits of protein shakes. Daniel Craig drinks them. You should too.

Fruits and Nuts – When he’s not feeling the protein shake (and even when he is), Daniel Craig gets his snack on by way of nutritious fruits and healthy, fatty nuts.

Meat – Do you enjoy a lean cut of steak or quality chicken breast? So does Daniel Craig along with numerous other celebrities, all of whom implement protein-rich meats into their respective diets.

Fish – When not in the mood for meat, help yourself to some fish instead. Try to make it something that goes big on omega 3 fatty acids, such as salmon, mackerel, herring, lake trout, sardines, or albacore tuna.

Brown Rice – It’s been reported that the fibre in brown rice helps lower cholesterol, prevent blood clots, and aid in digestion. What more do you need to know?

Baked Potato – As an alternative to rice, Craig fancies himself the occasional baked potato. A quick word of advice: leave the skin on.

Yogurt with Nuts – We’ll assume that when Daniel Craig helps himself to some yogurt, it’s the kind that comes fortified with probiotics. Throw in some nuts and you have yourself a healthy snack.

Meat – The best part about turning mass into muscle? You can potentially chow down on steak or chicken breast twice a day, presuming you diet the Daniel Craig way.

Fish – Who’s down for some sashimi?!

Leafy Green Vegetables – High in benefits and low in calories, leafy green veggies like spinach or broccoli are downright essential to any healthy diet. 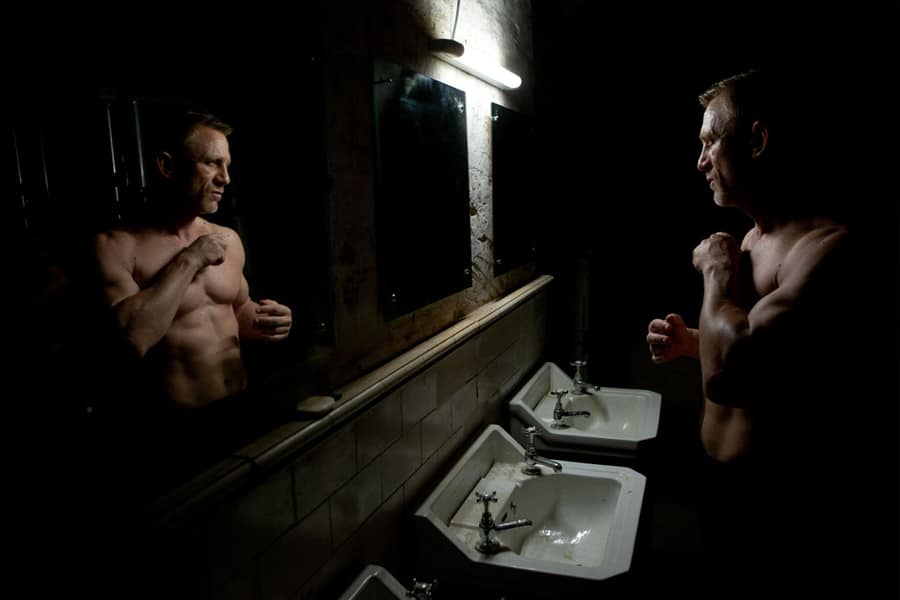 In super spy-like fashion, Daniel Craig has primarily kept his James Bond workout routine under wraps. However, that hasn’t stopped plenty of health sites or magazines from determining the method behind his muscle madness. All we’re trying to say here is that the Daniel Craig workout is more of an approximation than it is an exact science, especially since he might change things up from one instalment to the next.

One thing we can promise is that Daniel Craig’s James Bond workout routine will deliver clear results. That is, of course, presuming you take a sensible approach and bite off only as much as you can chew. After all, you probably don’t have Daniel Craig’s millions of dollars, his team of personal trainers, or an expensive doctor on hand to tend to your injuries. If you tear a ligament or throw out your back, you’re on your own. A little tact can, therefore, go a long way.

Now that we’ve established you’re a man of common sense, let’s dive into the Daniel Craig James Bond workout plan. Expect to hit the gym for five consecutive days of intense bodybuilding before pivoting to cardio and stretch exercises during the weekend. By taking this approach, you’ll give your muscles some time to rest and recuperate as you sustain overall body health. In regards to your bodybuilding schedule, you’ll dedicate Mondays and Fridays to a full-body power circuit, targeting specific muscle groups during the days in between. For the power circuits, you should perform 10 reps per set for a total of 3 sets. Take the number of sets up to 4 during the mid-week days, while keeping the reps at 10.

Perform 3 sets of 10 reps of the following exercises:

Tuesday – Chest and Back

Perform 3 sets of 10 reps of the following exercises:

For the weekends, you can take a looser approach toward fitness. What’s important is that you keep off the weights so that your muscles can properly recuperate. In the meantime, employ stretching exercises before partaking in some light cardio. Whether that means hiking or cycling or jogging on the treadmill as you watch “Skyfall” for the twentieth time is up to you. Just be sure to keep your blood flowing and your eyes on the prize.

We get it: you had big plans to party all weekend long. We’re not here to tell you that the pubs, restaurants, and night clubs are completely off-limits, though we can promise you that a full night of drinking will probably hinder your progress in some way. No matter what you decide to do the night before, be sure to implement another round of stretching and cardio during your second day of rest. It will help you retain a consistent focus and furthermore, assist with both heart health and metabolism.

What is Daniel Craig's diet?

While training, Daniel Craig eats 5-6 light meals a day to keep his metabolism going and giving himself plenty of fuel to burn off at the gym. He consumes both natural and supplemental proteins and has cut out all junk food from his diet.

What is Daniel Craig net worth?

Daniel Craig has a net worth of $170 million.

Daniel Craig began playing James Bond in 2016. He played the character in 5 movies over 15 years.