At UFC 271, two of the nation’s most prized fighters went the distance in Houston, Texas. One was out to exact revenge and reclaim his title, the other to leave no stone unturned in the heavyweight division, but only one was victorious. Western Sydney native Tai Tuivasa napalmed the fight world when brutally knocking out ‘KO King’ Derrick Lewis to make it 5-in-a-row — the second-longest win streak in the division. And whilst Robert Whittaker appeared to be ‘gutted’ by his loss, the mixed martial artist’s performance was not to be sneezed at. The Reaper was, at many times, on the cusp of submitting Israel Adesanya in the bout. Though, The Last Stylebender proved to outstyle his opponent, again, and remain king of the middleweight throne. 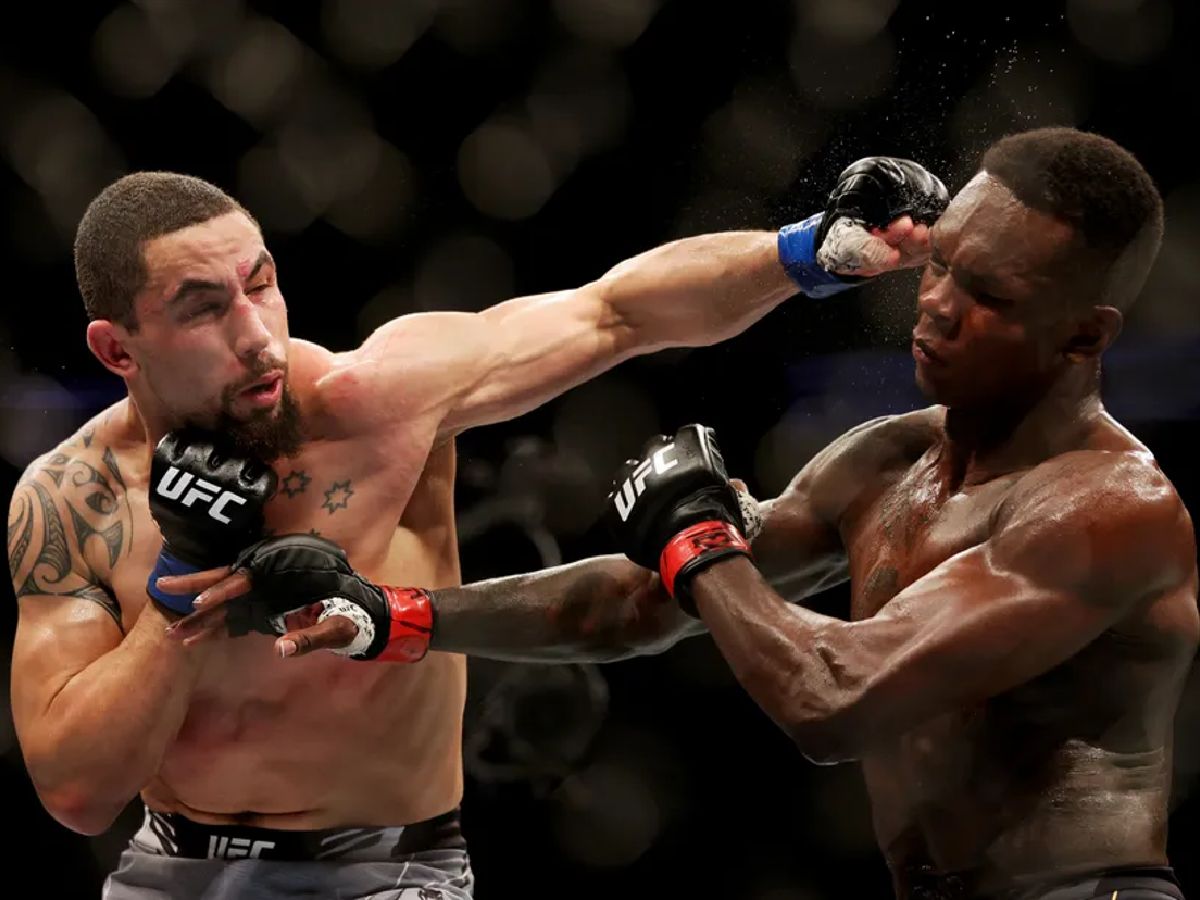 The long-awaited rematch between New Zealand‘s Israel Adesanya and Robert Whittaker has had fight fans on edge for some time now. And since patience is a virtue, the bout paid in spades. The rivalry personified itself when the fighters rendezvoused in H Town. Whittaker, appearing more reinvented and refined since their first fight, showed enormous chutzpah despite the odds looking swole for The Last StyleBender.

And despite Adesanya’s 6.5-inch reach advantage over Whittaker, that’s always gone down a bomb in fights — not to mention his towering height — there appeared to be a new fire alight in Bobby Knuckles. In their pre-fight press conference, there was a fair to middling of trash talk, but nothing McGregor-esque. But when the middleweight champ said, “I’ve knocked him out twice in one fight— I’ll do it again,” Whittaker defied that POV.

The first round saw the 185-pounders maintaining a distance, fiending leg kicks and defensive. Whittaker wasn’t rushing or overextending per his first fight, but Adesanya did knock down the Australian when landing a strong jab to his chest. Nonetheless, Whittaker remained composed and attempted to take down the middleweight king a couple of times though was unlucky. But it was Adesanya’s nuanced striking approach and leg kicks that won him the judge’s scores.

The second round showed shades of the first fight when Whittaker was swinging widely. But the Kiwi managed to evade many of the headshots with his patented back lean. The Aussie ensuingly unloaded some swift connections, then a takedown, before The Last Stylebender got to his feet and churned out many low leg kicks. Round #3 showcased a much-proficient boxer in Whittaker when he clipped the champ with somewhat of a damaging jab. Still, Adesanya remained unfazed. The two continued to go tit for tat, per Daniel Cormier.

Sportsmanship at its finest 👏

Izzy and Whittaker show each other respect after the fight. #UFC271 pic.twitter.com/3lsSCUAdUu

The fourth and final rounds were Whittaker’s. Coming out with his hard & patented oblique kicks, some jabs, not to discount the leg kicks and right jabs of Adesanya, and a takedown by the former champ, before getting the back and securing a standing rear-naked choke which had fans clamouring for the defeat of the Auckland native, but flopped. The Reaper landed another takedown in the last round before the two clinched by the side of the cage till the bell.

Albeit not being of Whittaker’s top finishes, the bloke’s performance was phenomenal. At the end of the fight, the judge’s scores were unanimously in favour of the Kiwi (48-47, 48-47, 49-46). In the champ’s octagon interview, he said “I knew he was going to bring everything ’cause last time I took everything away from him, so he had nothing to lose. And like I said, ‘I’m the champ. If you want it, come get it’.” 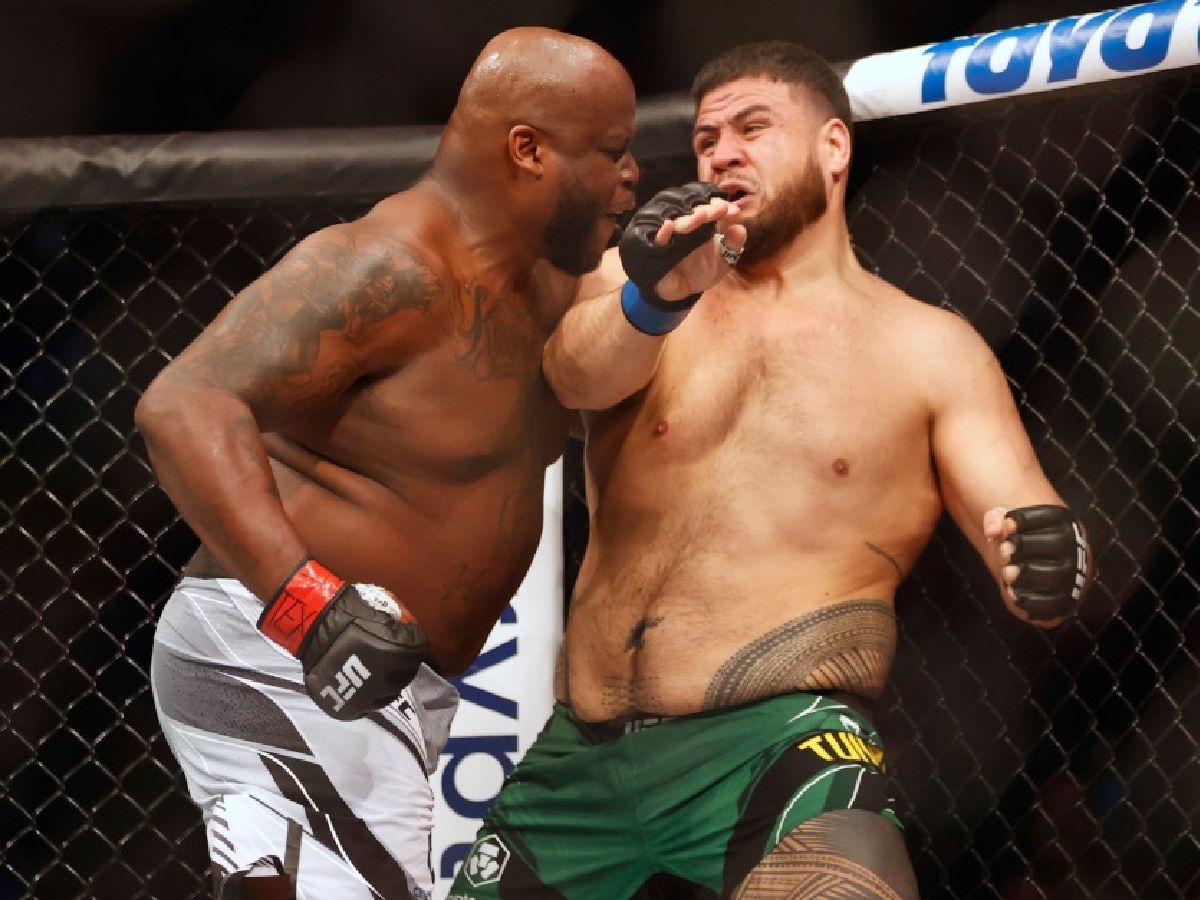 With both heavyweights ending 2021 on a high note, it was a no brainer that the division’s most feared pugilists were to wrangle in the octagon in due time. And unfortunately, it couldn’t have gone more south (literally) for the quote-unquote “Knockout King” Derek Lewis. In his 24th UFC appearance, The Black Beast swore to fans that “there’s going to be a lot of swinging & banging,” and that he was “coming to knock his ass out,” but suffered the same fate as he did at UFC 268.

In the co-main event, Lewis and Tuivasa exhibited more wrestling and clinching than anticipated. In the first round, the fighting pride of Housten was throwing some legs kicks and switch kicks before clenching Bam Bam by the fence and tripping him to land 4-5 heavy blows to the head. The western Sydney native managed to get up slightly shaken and unloaded some wild punches before being clinched again and taken down for a peppering of hammer fists.

The next round saw the men phonebooth fighting. That was until Bam Bam landed a right elbow that sent The Black Beast crashing onto the canvass. The crowd went bananas. In the biggest win of his career, Tuivasa told D.C “That’s the king of knockouts, much respect to Derrick Lewis. But like I said ‘I’m young and upcoming, I’m taking over now’.”

With both middleweights tiering in the division’s top 5, it had been envisaged either fighter would submit or KO/TKO one another — and the stakes couldn’t have been higher. At the beginning of the bout, Derek Brunson had transpired to get the win. The mixed martial artist maximised his wrestling prowess, made some modest swings and managed to bank the first round when bagging two takedowns and even had the Killa Gorilla in a rear-naked choke before the bell.

The succeeding round is where Cannonier got groovy. After a not-so-successful takedown by Brunson, Cannonier landed some damaging hooks and jabs. Upon appearing wobbled, Cannonier landed another right elbow and some combinations that dropped his opponent; he then followed it up with a semi-concussive ground-and-pound; winning the fight, performance of the night and even title shot.

In the octagon interview, D.C asked the Killa Gorilla about the potent elbow that shook Bruson, and he said, “It wasn’t just that elbow, it was that nice little backhand. I keep telling people, ‘you keep getting in my face with that disrespect, you gonna catch the backhand. You come running up in my face, I’m a bust you in yours,’ and that’s exactly what I did.”