Australians looking to purchase a rapid antigen test (RAT) are now able to check supply levels online, thanks to a new online tool. Entitled ‘Find a RAT‘, the new website allows users to identify RAT test availability via postcode, preventing lengthy wait times and disappointment over the lack of supply. The online resource comes as local pharmacies, supermarkets and chemists run desperately low on tests in light of a growing Omicron outbreak.

Introducing Find a RAT – Easily find and report on Rapid Antigen Test availability across Australia.
Built by yours truely! Jump on and report those RAT stock levels! https://t.co/f2ZiErkCN4 😷🐀 #COVID19VIC

What is Find a RAT?

Designed by Matt Hayward from software agency PipeLabs, Find a RAT is an online website that provides up to date rapid antigen test availability for local retailers. The website acts as testing kit locater, helping residents across Australia find testing kits in their area. The website displays a map that allows users to view red and green dots that signal where the tests are in stock. According to Hayward, he was inspired to create the online tool after his partner struggled to find a test.

“I started the website after my partner was looking for a test and had no luck,” he told 7News. “I thought I’d put my tech skills to use and build out the site today.” 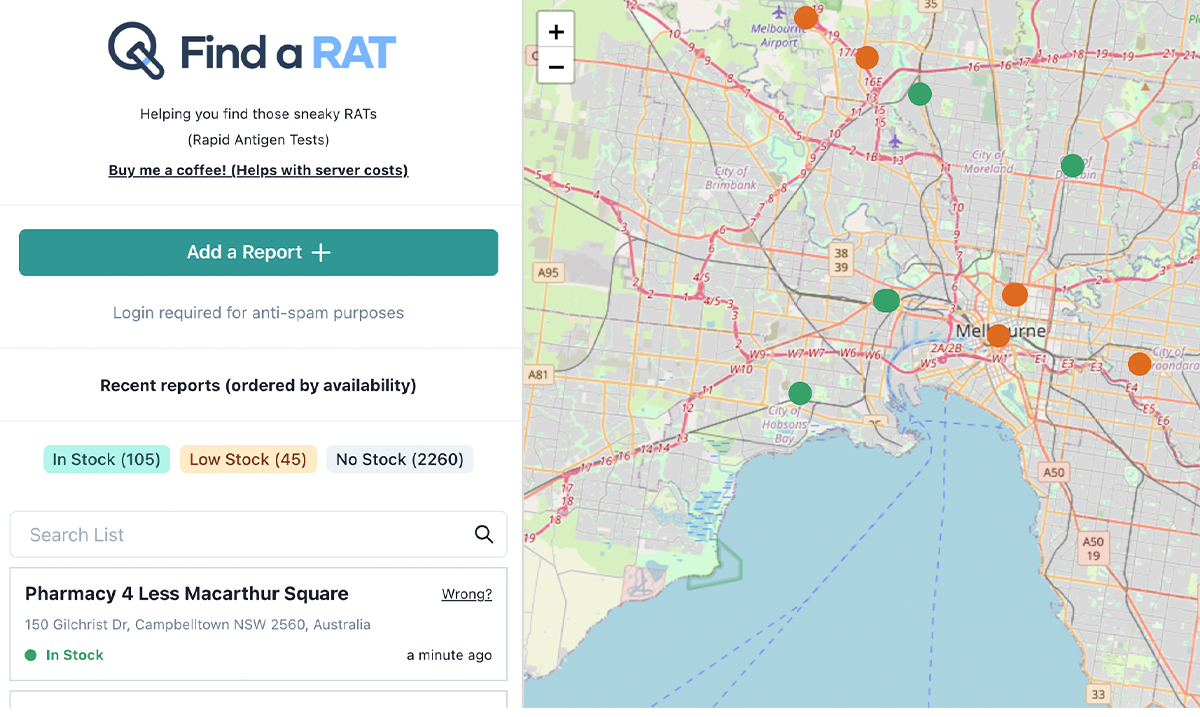 How Does Find a RAT Work?

After launching on Monday, Find a RAT has seen hundreds of Australians jump on board to not only use the service, but support the information infrastructure. The website utilises crowd-sourced data from user reports, with locals providing information on whether or not a store near them has available stock of rapid tests.

Addressing concerns that the data may be skewed via misinformation, Hayward suggested further updates may require a moderator. In fact, the site has already seen some false claims, with SBS News reporting a stockpile of tests at Prime Minister Morrison’s official Sydney residence, Kirribilli House, however, the honesty system does appear to be working.

“It’s all crowdsourced, so that means anyone can view all the data for free and anyone can submit a report,” he said. “So if people have seen something that’s wrong like someone’s put Coles as their house for a bit of fun, people have gone and corrected them, so that’s been really, really good.”

As mentioned, the interactive map on the website’s home page shows ‘In stock’ marked in green, ‘low stock’ in orange, with ‘no stock’ indicated in red. Users can also search for available RAT near them using their postcode.

We have known for nearly two years that testing is key to managing this pandemic. And yet Scott Morrison hasn’t done a thing to make rapid antigen tests available and affordable.

The introduction of the RAT finder comes amid growing criticism of the Morrison government’s refusal to roll out the tests to the public for free. With COVID-19 numbers rising rapidly, including over 35,000 new cases over the 24 hours to Wednesday in New South Wales alone, the Omicron variant is putting increasing pressure on the country’s frontline workers.

In response, the Prime Minister called a National Cabinet meeting on Wednesday, before announcing that people who test positive on a rapid antigen test will no longer be required to take a PCR test. He then went on to announce that up to 10 free rapid antigen tests would be provided through pharmacies for concession card holders over the next three months.

“Universal free access was not considered the right policy response by all of the states and territories in attendance today, and the Commonwealth,” he said.

The announcement contradicts Morrison’s previously plans to keep the RAT supply un-subsidised for vulnerable Australians. The Prime Minister had confirmed to Sunrise on Tuesday that he was not planning to make the tests available for free.

“We’re now in a stage of the pandemic where you can’t just go around making everything free,” he said. “When someone tells you they want to make something free, someone’s always going to pay for it, and it’s going to be you.”

Morrison’s stance has copped widespread criticism from both sides of the political spectrum, however, it is the industry body that has had the greatest reaction. CEO of Professional Pharmacists Australia Jill McCabe said by making the tests free, the government would be helping to protect the health and safety of all workers and their families, not just those who can afford to buy the tests. 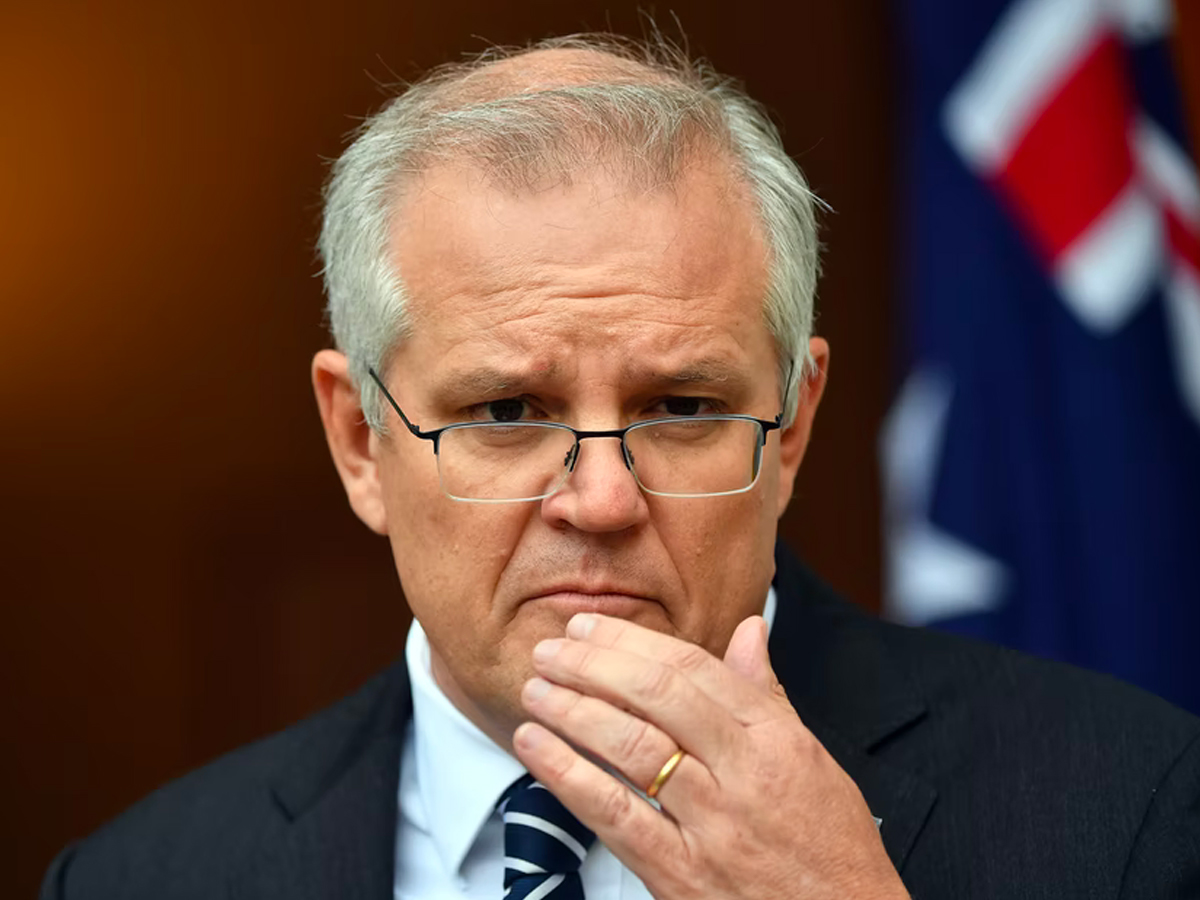 Aside from simply making RATs harder to find, the unregulated stance on the test has seen price gouging dramatically increase. According to the Sydney Morning Herald, more than 20 complaints to the Department of Fair Trading about price gouging for rapid antigen tests. Some reports even suggest retailers are selling rapid antigen test multipacks individually in an effort to increase profit.

“It’s one thing for the Government to shift to managing, and living with, the virus, but it’s another thing to completely obfuscate responsibility for protecting the health and safety of Australians,” McCabe said.

What is Find a RAT?

Designed by Matt Hayward from software agency PipeLabs, Find a RAT is an online website that provides up to date rapid antigen test availability for local retailers. The website utilises crowd-sourced data from user reports, with locals providing information on whether or not a store near them has available stock of rapid tests.

How can I find RAT near me?

The best way to see where available Rapid Antigen Tests are near you is to use Find a RAT, the new online tool. Simply enter in your postcode and crowd-sourced data will display where available stocks of RATs are in relation to your location.

How much are Rapid Antigen Tests?

While Rapid Antigen Tests are generally priced between $15 and $25 for a 4-pack, recent demand has seen reports of price gouging emerge, with some publications noting prices of up to $80.