I already know what you’re thinking: clickbait alert! I’d certainly be thinking it. However, it’s not the case. I’ve been using the BDI Sequel Lift Desk for the past few days and it’s everything I’m saying it is. I kid you not: this superb automated desk will literally change your life.

Allow me to explain. You see it’s all about seeking a common ground between customisation and healthy living. Until recently these two forces were often incompatible. Previous generations were if anything testaments to the notion that “customisation” or “convenience” were mere euphemisms for “here’s one more thing that will confine you to a chair or couch”. From microwaves to remote controls, it appeared that almost every product making something “easier” also made us a little or a lot idler when we used it. 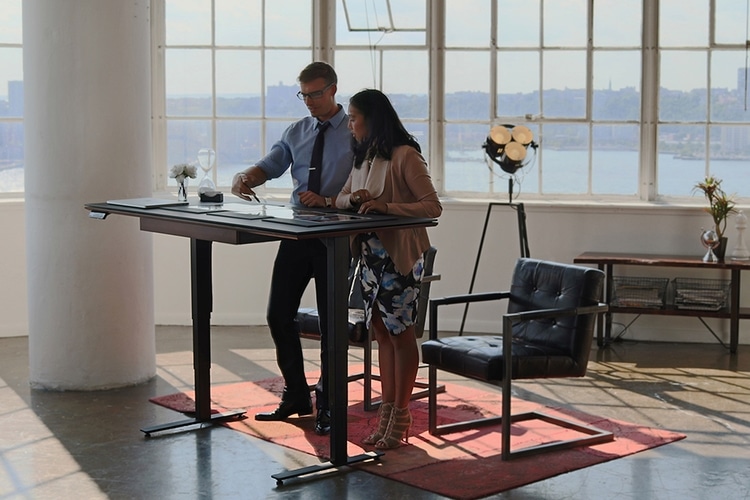 The beauty of a product like the BDI Sequel Lift Desk and ergonomic furniture in general is that it essentially spits in the face of everything the word “convenience” entailed up until the last few years or so. The desk and other things like it do not pave the way for some sort of future straight out of Wall-E, where humans suck food through a tube while coasting around on the go-cart equivalent of a TV dinner tray, but instead a future where the products we use make our lives easier while simultaneously improving things like posture and personal health.

In further defence, here are some facts: 1) Most of you work while sitting for an average of 5 hours and 41 minutes each day, and those of you with a steady office job probably consider that number to be generously low. Furthermore that stat doesn’t even take into consideration the sitting we do while not at work. 2) Sitting at a desk burns far fewer calories than standing or walking. 3) Burning less calories and exhibiting a sedentary lifestyle increases our chances of obesity, heart disease, diabetes, high blood pressure, joint pain and even cancer. Yes, cancer.

Here are more things to consider: 1) According to some experts, going to the gym won’t necessarily negate the effect of sitting for extended periods of time (in the same sense that jogging every day won’t negate a cigarette smoking habit). 2) Standing at your desk does not automatically improve all the negative effects associated with sitting at your desk and can in fact compress the spine and lead to gravity-related conditions like varicose veins and carotid arteries. 3) While standing does offer some benefits not offered through sitting, it also causes you to tire out more quickly and with some tasks it can actually undermine your ability to perform. 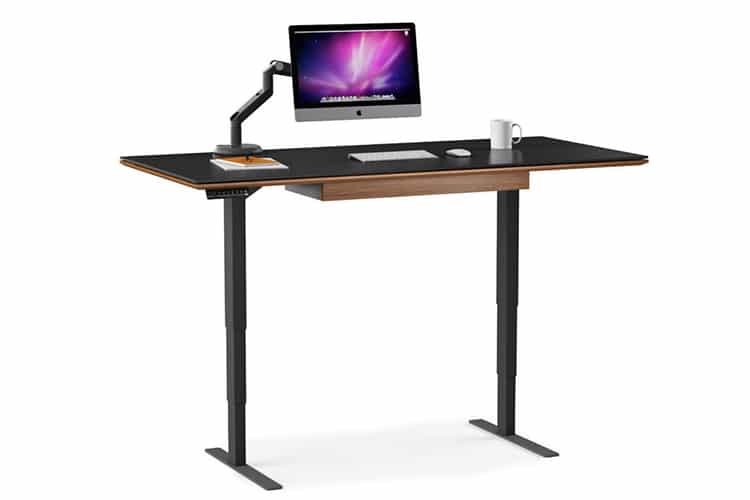 So where does that leave us in terms of optimising health? We’ll tell you where: with a sleek BDI Sequel Lift Desk that can lower and rise with the touch of a button and therefore allow users the best of both worlds. Read on for an overview.

In the land of efficiency, minimalism is king. BDI knows as much and they definitely took a less-is-more approach when designing the Sequel Lift Desk. Think clean, think spacious and think un-cluttered. As such the desk consists of a supremely smooth micro-etched black glass tabletop that comes available in four finishes. And when we say smooth we mean smooth, like one of the first things you’ll do after assembly is rub your face against the glass surface while making slightly unintelligible groans of ecstasy. For things like dust and smudges that premium glass is as easy to clean as the nearest window and deeper scuffs can be buffered out.

In keeping with its focus on simplicity and efficiency each lift desk features wire management by way of a small slot for wires to come through. Underneath the desk there are also Velcro straps to manage the automation wires so they don’t droop. And those legs are heavy and steady with plenty of support to maintain balance no matter what the height. 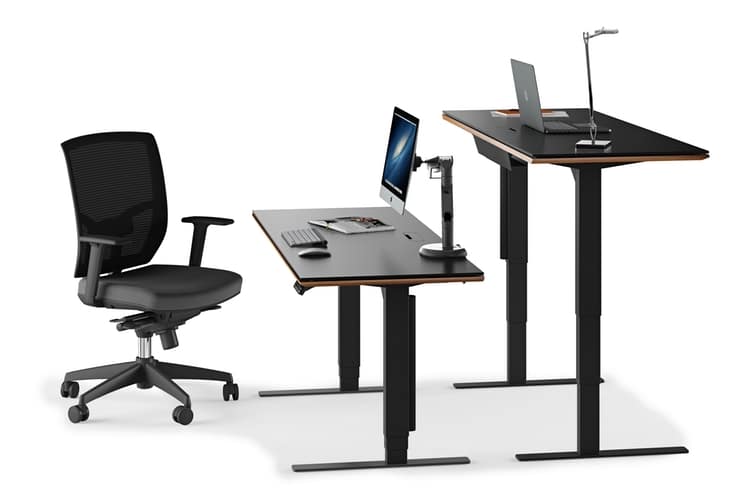 The BDI Sequel comes available in two sizes and the larger size includes an optional storage drawer while the smaller one does not. The tabletop on both models is definitely spacious enough to handle any workload but those with a need for storage space will want to pair the desk with another drawer unit. Thanks to the minimalist aura and use of modern, dark colours, the lift desk is versatile enough to blend seamlessly with any other furniture or equipment you put around it–adding extra drawers or desk units won’t hinder the aesthetics (unless you opt for some really ugly drawers but that’s on you).

Of course what really makes the BDI Sequel Lift Desk shine is the effortless touch-button control that raises and lowers the unit with exceptional ease. Users have the choice of placing the keypad on either the right or left side of the desk and there are no hiccups whatsoever as far as the raising or lowering goes. Touch the arrow button, close your eyes and listen to the smooth mechanical purr of the BDI Sequel Lift Desk elevating flawlessly. Pair that with the extensive tabletop space and absolute sturdiness and there’s basically nothing left to say about the painstakingly consistent performance of this remarkable desk. 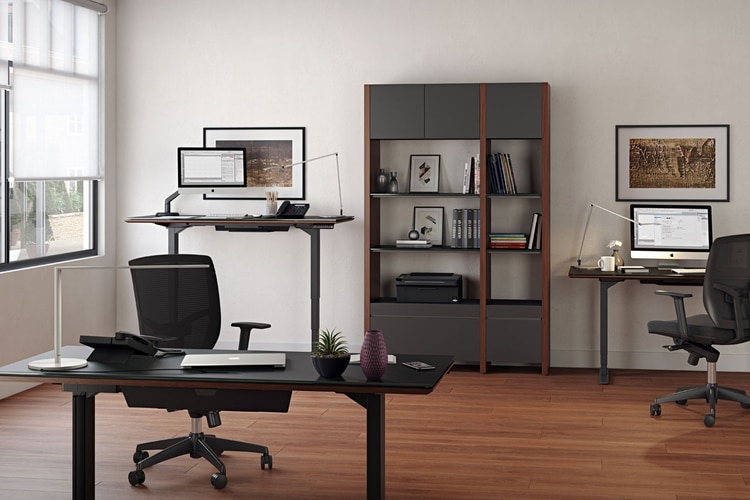 Assembly of the BDI is swift and practically brainless. It primarily involves installing the button pad, the control module, and the legs, and then connecting them by way of easy cables before flipping the desk and putting the glass panel on top. Everything you’ll need is included except for a Philips head screwdriver, which costs about $5 at the nearest hardware store if you don’t already have one lying around. Also included are optional accessories like a cord conduit, surge protector and wire tray for some enhanced clutter control. Assembly took about an hour and when it was done it was done–the desk was immediately 100% operational and ready for use.

And use it I did. In case it’s not incredibly obvious by now, the BDI Sequel is the epitome of premium usability. Not only does the button panel offer unfettered automation, but it also gives users the option to plug in presets designated by number. Press one of the four numbers and the desk automatically slips into the desired position. If someone else starts using the desk, reset the pre-ordained heights and start all over again. 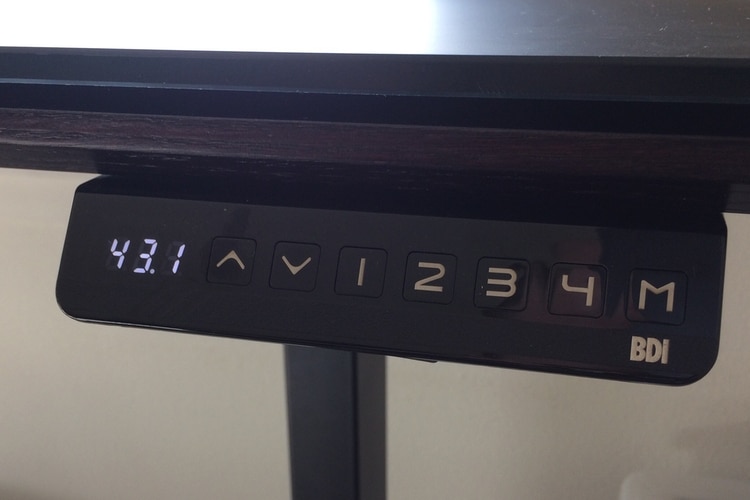 But the usability goes beyond that. Half of this article was written in the sitting position. Then for editing I raised the desk and reviewed. For other tasks I kept the desk is raising position and it was amazing how much easier it was to keep momentum going without having to keep sitting and standing. Just as the desk can integrate with other accessories and furniture, it can integrate with the user’s activities, making one realize just how surprisingly inconvenient it can be sometimes to have to sit down when you’re in the “zone”.

In other words, work desks don’t get user-friendlier than the BDI Sequel. Between the spacious glass surface and the efficient wire management and the effortless automation there’s really nothing else one can ask of it. The product is in fact so addictive you might find yourself playing with the buttons or rubbing your hands along the surface just for the heck of it. 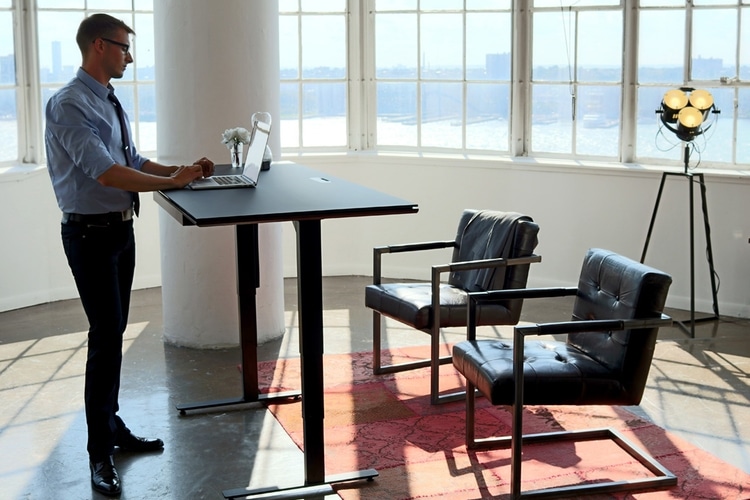 The BDI answers a question too many consumers fail to ask: why can’t products be both luxurious and healthy at the same time? It’s a legitimate query in a world oversaturated by things that do make your life easier, but frequently at the expense of your personal health. Not everything that’s good for you has to feel like some sort of burden in the same sense that not all really healthy food has to taste like Styrofoam. Every now and then we get thrown an avocado, i.e. a genuinely tasty food that actually promotes a healthy way of living. Pardon the tacky metaphor, but something like the BDI Sequel Lift Desk is that avocado. It prompts you to remain active throughout your day while making your life more convenient in the process–a piece of furniture can’t get much better than that.

We weren’t kidding when we said the BDI Sequel Lift Desk would change your life. Don’t just sit there (no pun intended)–check this baby out as soon as you can and prepare to fall in love. 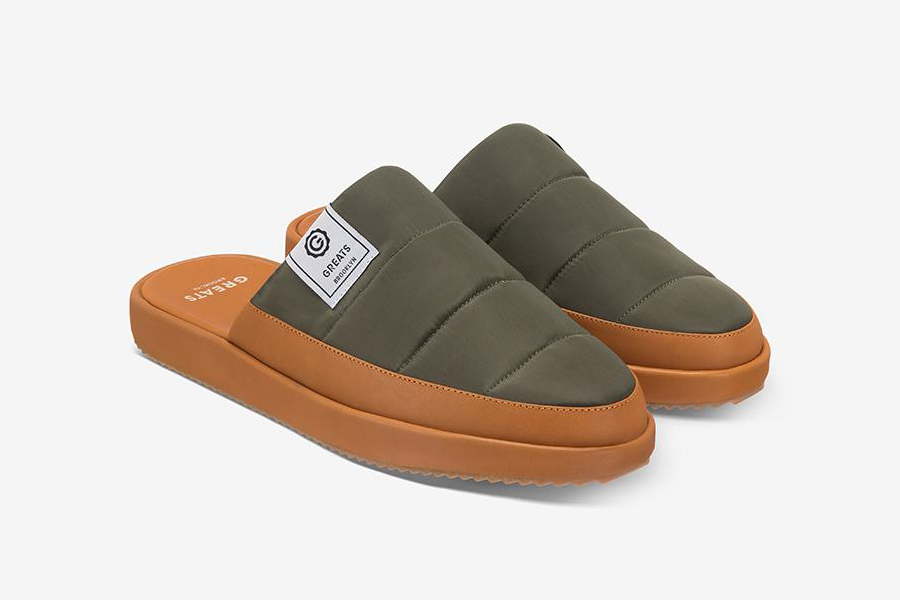 Fashion
Greats Keeps Your Feet Cozy with The Foster Slipper