The slow demise of video game arcades in practically every market outside of Japan left a void that no home console and controller could fill. The immersive nature of arcade racers placed you in the driver’s seat and classic light gun games like Time Crisis and Virtua Cop made you feel like the gun-toting hero of an action flick. The satisfaction of looking down the sights and lining up that shot was a feeling lost for years until the arrival of VR.

Enter Blood and Truth. The latest PlayStation 4 VR exclusive that does a bang-up job of making you feel like John Wick, James Bond and John McClane all rolled into one.

Slip on the VR headset, place a Move controller in each hand and become elite Special Forces soldier Ryan Marks who’s returning home from active duty for a funeral. As soon as Marks arrives in old London town shit hits the fan as the family business/criminal enterprise is seized by rival gangster Tony Sharp who may or may not be backed by some serious international muscle. 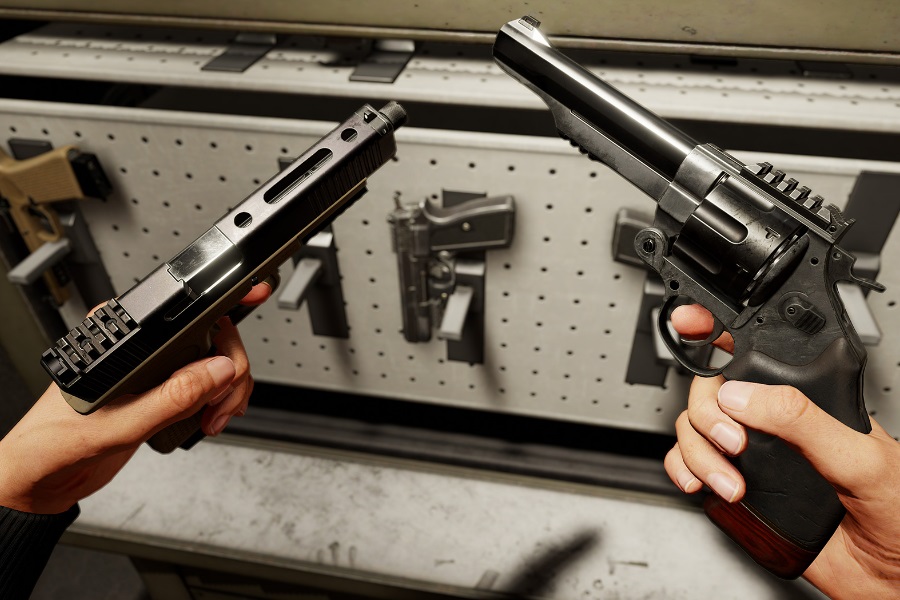 It’s up to Marks, along with his playboy brother, hacker sister and dear old mum, to shoot everything that moves, spilling blood and discovering the truth behind the coup. See what I did there? The story is fine. It’s your stock-standard tale of revenge elevated by family drama. The voice acting is superb with cockney accents aplenty, although the dialogue never quite reaches the wit of a Guy Ritchie flick.

Blood and Truth stands tall thanks to its amazing gunfights. You’re equipped with a holster on each hip for carrying pistols and revolvers and another two over the shoulders for heavy weapons like shotguns, sub-machine guns and rifles. An infinite-ammo clip is fastened to your chest. Think Simon Pegg all decked-out towards the end of Hot Fuzz.

The immersive nature of VR makes it feel like you’re dual-wielding weapons and blasting away thugs like some badass action hero. Aiming can be tough because you’re actually looking down the sights of a gun and not just lining up a shot with the on-screen reticule. Yet, the satisfaction of taking a headshot or exploding the cliché red barrel with a well-aimed bullet is unlike anything offered by a traditional first-person shooter.

To reload, you lift a hand to your chest, grab a clip and insert it into the gun. There are even a few fun gimmicks like throwing a clip in the air and catching it in the gun. The Move controllers have a dedicated taunt button for giving thumbs up and flipping the bird. PlayStation Blog recently published an article citing all of the fun gimmicks and a few of the must-try ones included pistol-whipping enemies during the run-and-gun sections and pulling a grenade pin with your teeth.

Discovering new weapons throughout each mission allows you to mix and match with interesting results. A pistol in one hand and a double-barrel sawn-off in the other is a good combination for most shootouts, although its risk vs reward, as dual-wielding makes it harder to reload and impossible to throw back a thug’s live grenades.

Blood and Truth is best described as a cover shooter. The Move button on either of the controllers moves Marks from cover-to-cover while head tilts in real life makes him lean out to take a shot. Beyond shootouts, there are car chases, lock picking scenarios, wires to cut, walls to climb and a few fun one-offs like destroying artworks with spray paint.

Across the five hour campaign, you will be encountering enemies in the Middle East, rigging casinos to explode and rescuing a hostage from a demolition site. These are a few of the less-spoilery scenarios. There are plenty of reasons to replay the game with branching paths to explore, collectibles to discover that unlock weapons upgrades and a bonus time-attack mode. The sheer joy of showing the game to a friend for the first time is enough of a reason to keep it installed on your PlayStation 4 console.

Since Blood and Truth launched last week, PlayStation detailed free upcoming DLC including online leaderboards, new time attack and score challenges, New Game+, and an additional Hard Mode for those of you who want to up the ante.

Blood and Truth does have a few issues: Ryan can only move slowly between points, even when being shot at. The ability to run would be appreciated if only to increase realism. Missions are linear, and you can’t turn back even if you miss a point of interest. Playing with a DualShock controller is terrible. Aiming comes from moving the controller in the air, which feels cumbersome and it’s hard to be accurate. Move controllers are recommended.

Other than that, PlayStation has another clear winner on its hands and another must-play VR game following last year’s Beat Saber and Astro Bot Rescue Mission. Blood and Truth is that 1990’s arcade light gun experience you know and love with better graphics, more immersion and decent voice acting. It’s as close as you’re going to get to starring in an action blockbuster without leaving the confines of your living room. Blood and Truth is available now exclusively on PlayStation VR.

Man of Many received a digital copy of the game courtesy of the publisher.