Have you ever looked at life through Scotch-coloured glasses? Tilted to the side and raised high in the air, a dram can set the stage for one of nature’s great dances. Peer close enough and you can see the sunlight flicker through the whisky, illuminating a lifetime of stories past, present and future. According to Sydney-based ceramicist Milly Dent, it’s not just colour that catches the eye, but warmth, in all its forms.

With a portfolio of classically crafted ceramics and homewares, the Australian artisan is adept at translating concept into creation. Her work is inspired by the natural world – the people, places and processes that hallmark our heritage. However, in a somewhat unexpected turn, she’s found harmony in Speyside. Compelled by the stories of those behind single malt icon The Balvenie Scotch Whisky, Milly is beginning to see the light within the dram.

“Hearing the stories of The Balvenie craftsman, the coppersmith and coopers in particular, definitely resonated with my own love of my craft,” she explains. “Craftsmanship tells a story of passion, pride, skill and spirit. For me, it’s an innate desire to make and to strive for beauty. The passion in the work by each speaks volumes to their commitment to what they do, and as such the whisky.”

Just as the ceramicist refines her clay forms by hand, so too does The Balvenie oversee its whisky production, from the traditional malting floor that sees the label’s malt men turn it by hand to the barley farming that has remained near-on unchanged for centuries. But above all else, the two makers, while different in nature, understand the significance of respecting the materials on which their creations are built. 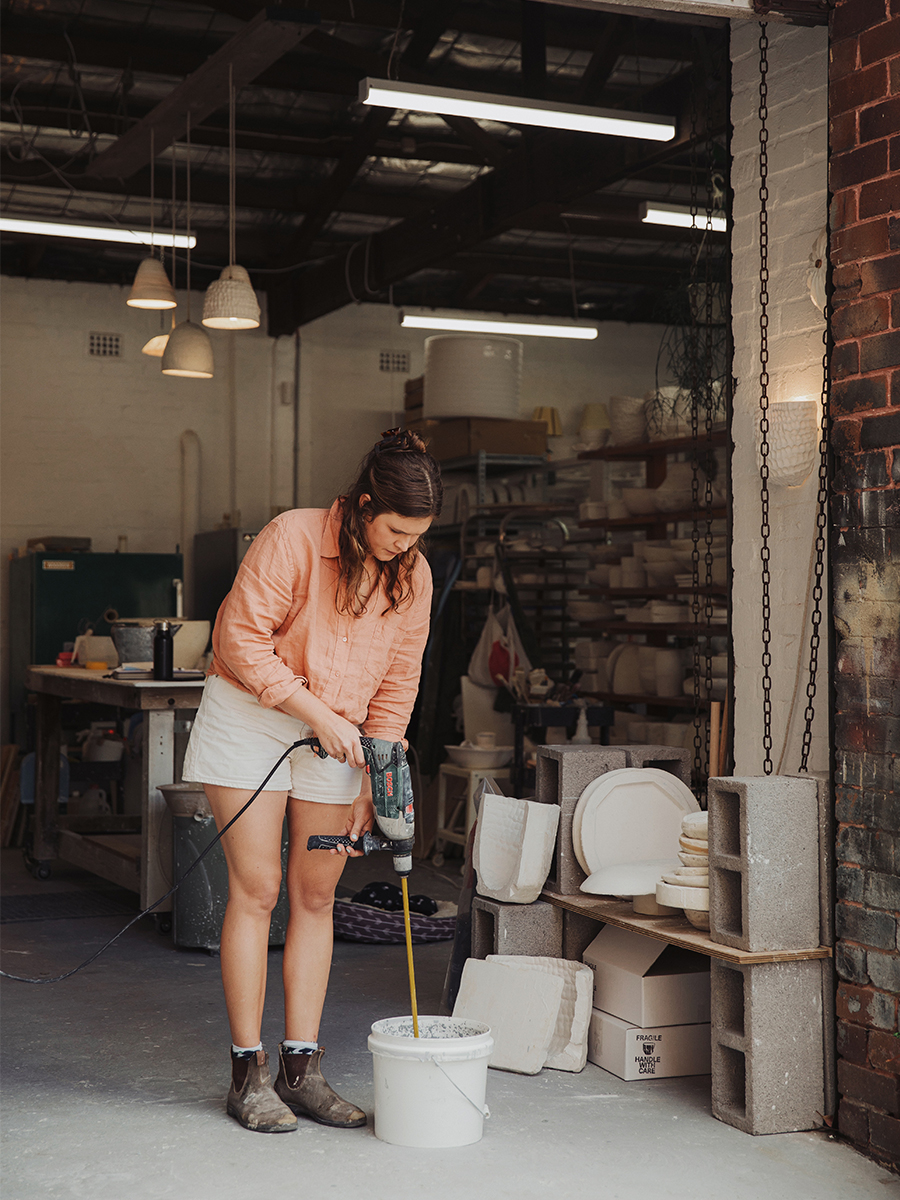 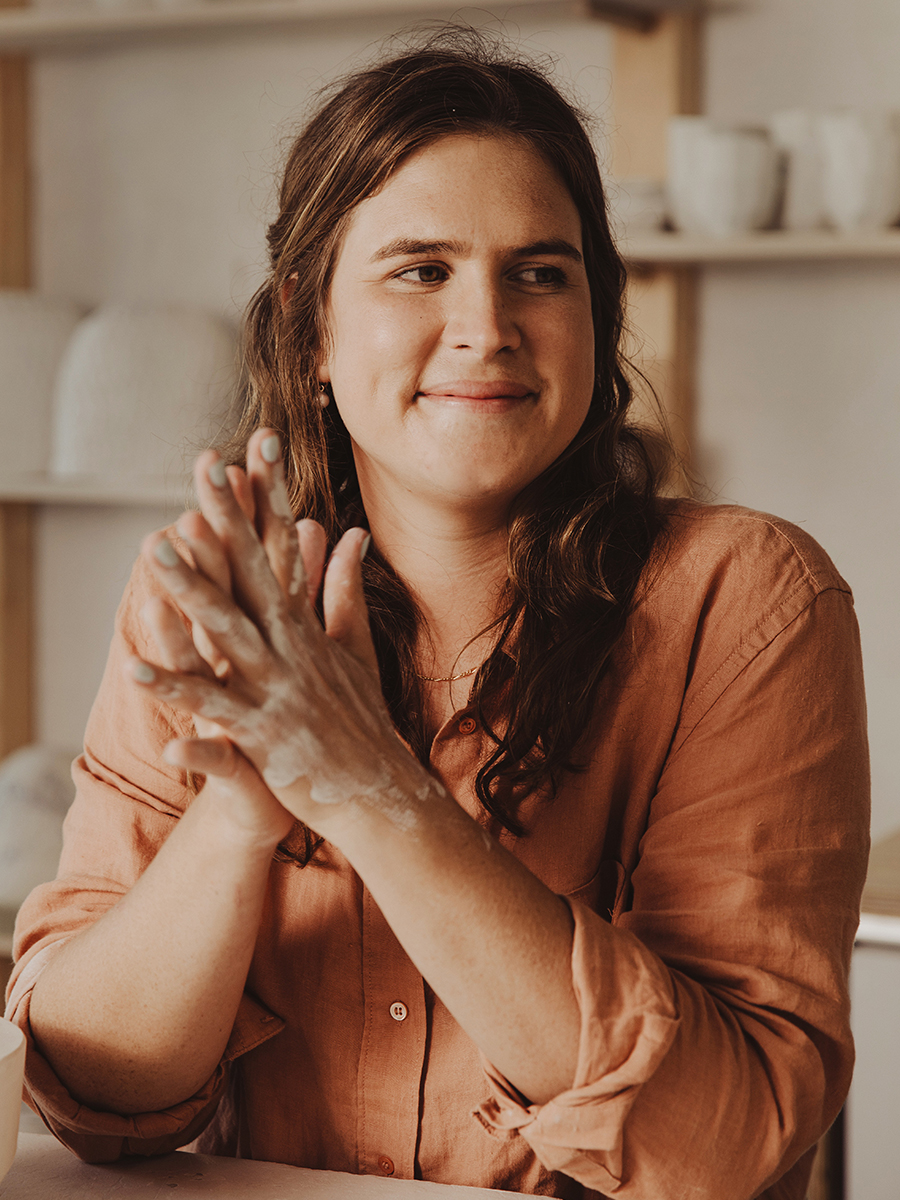 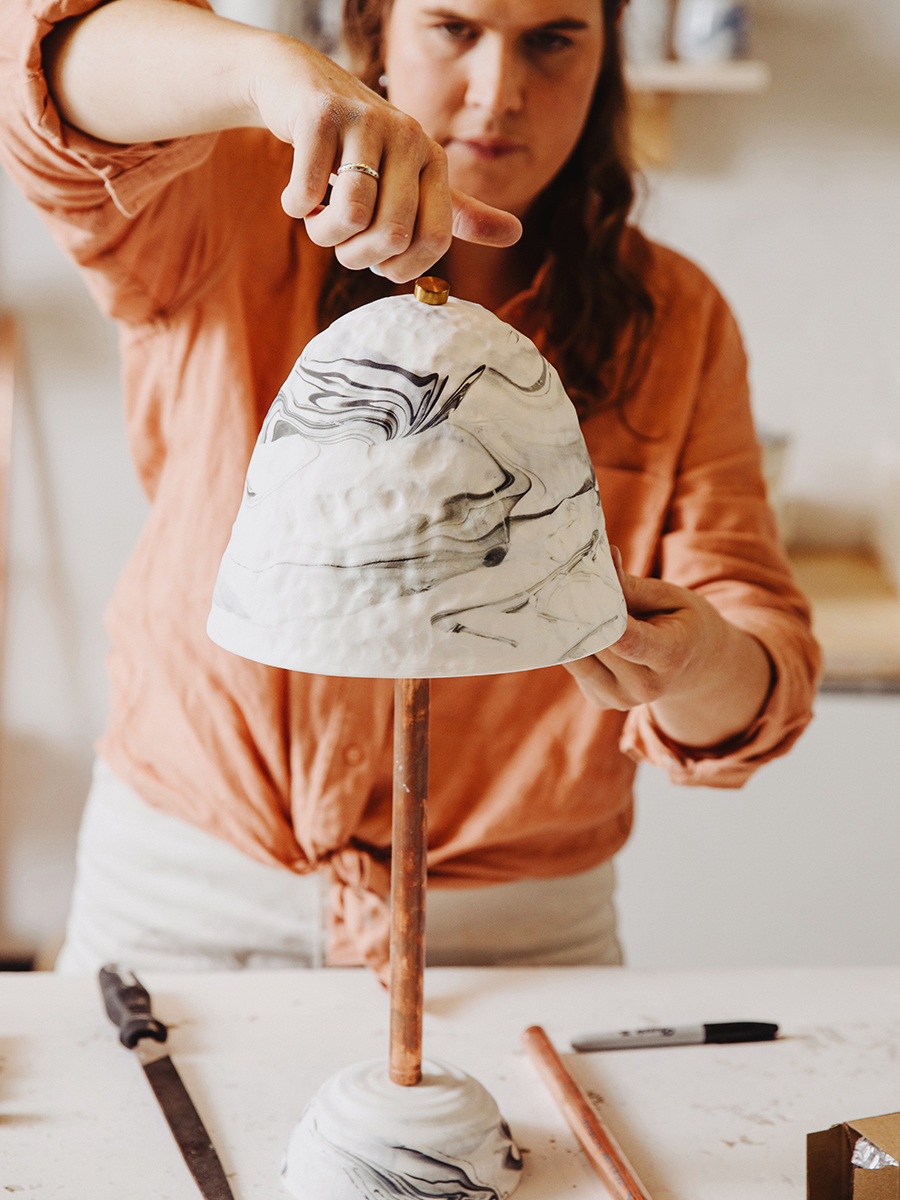 At its core, the need to create is innately human, and much like The Balvenie’s whisky-making process has remained unchanged for centuries. A business built on honest, hard-working people, the whisky icon is upheld by the stories it shares. Thanks to Milly Dent, there’s another chapter being added to the fold. In a fitting nod to the people behind the whisky, the artisan maker has crafted a custom Ceramic Whisky Tumbler Set and Honey Lamp, designed to not only capture the essence of The Balvenie spirit, but the heroes responsible for producing it. “My work intends to enhance daily dining or drinking rituals. I believe that just as food and drink symbolise things in our lives, so too should the way we choose to present it. This body of work focuses on the way we consume, and how it should embody a deeper story of craftsmanship and creativity, adding soul and dimension to a space or experience.” 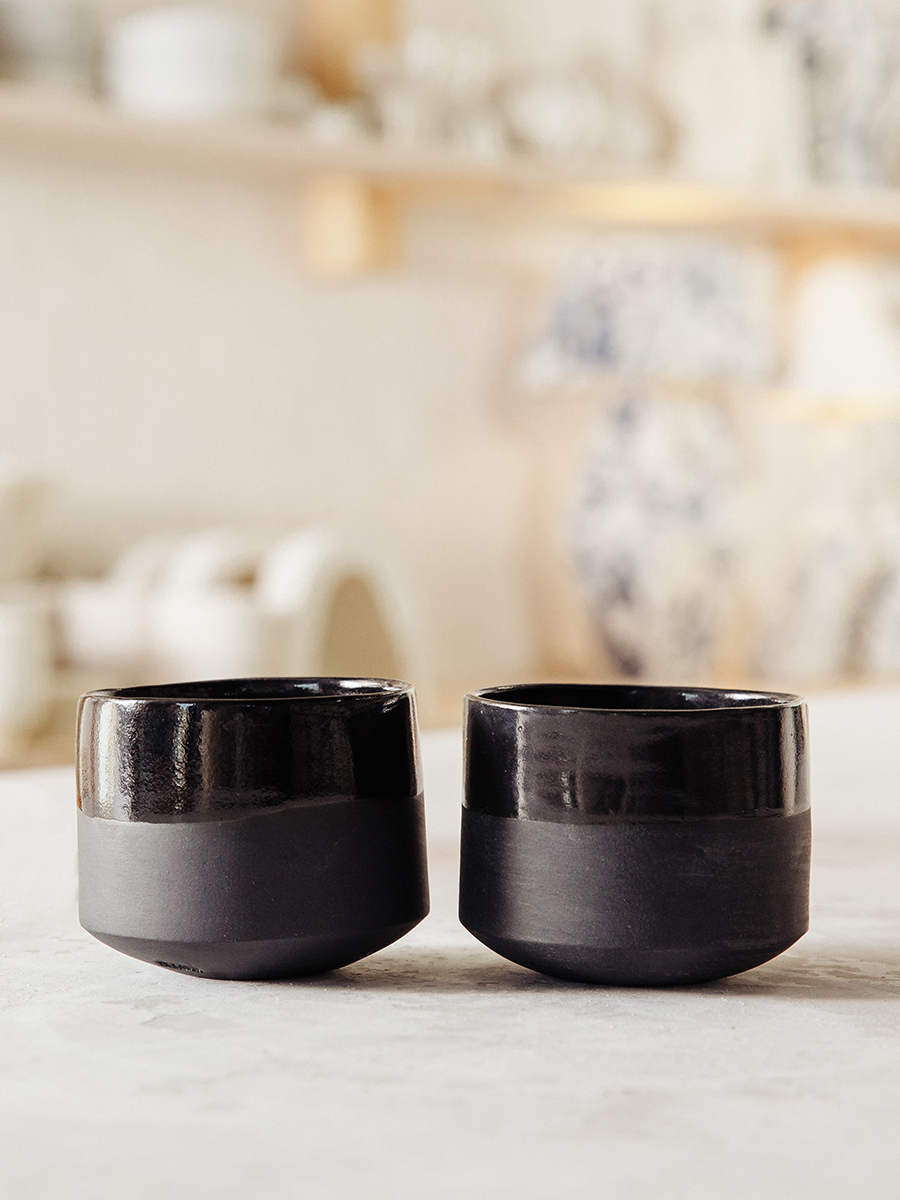 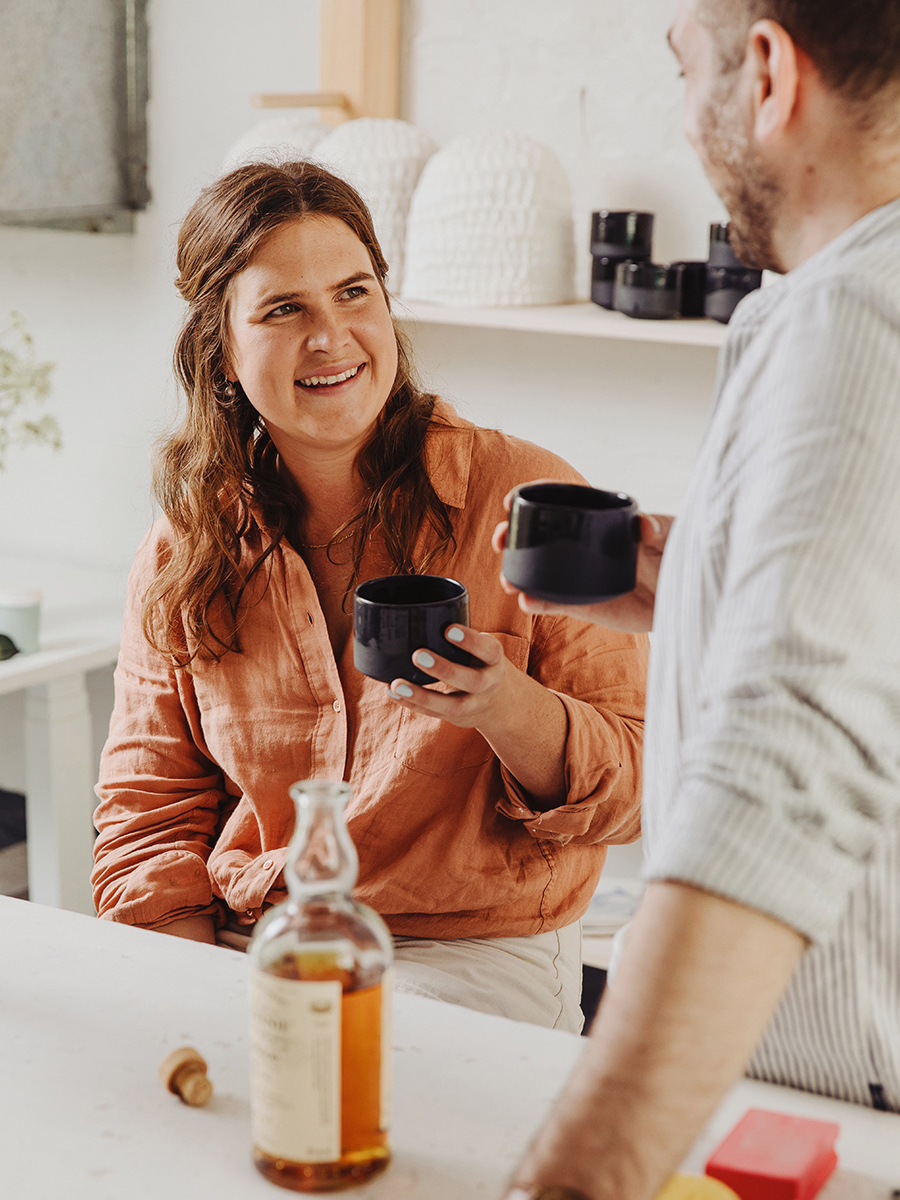 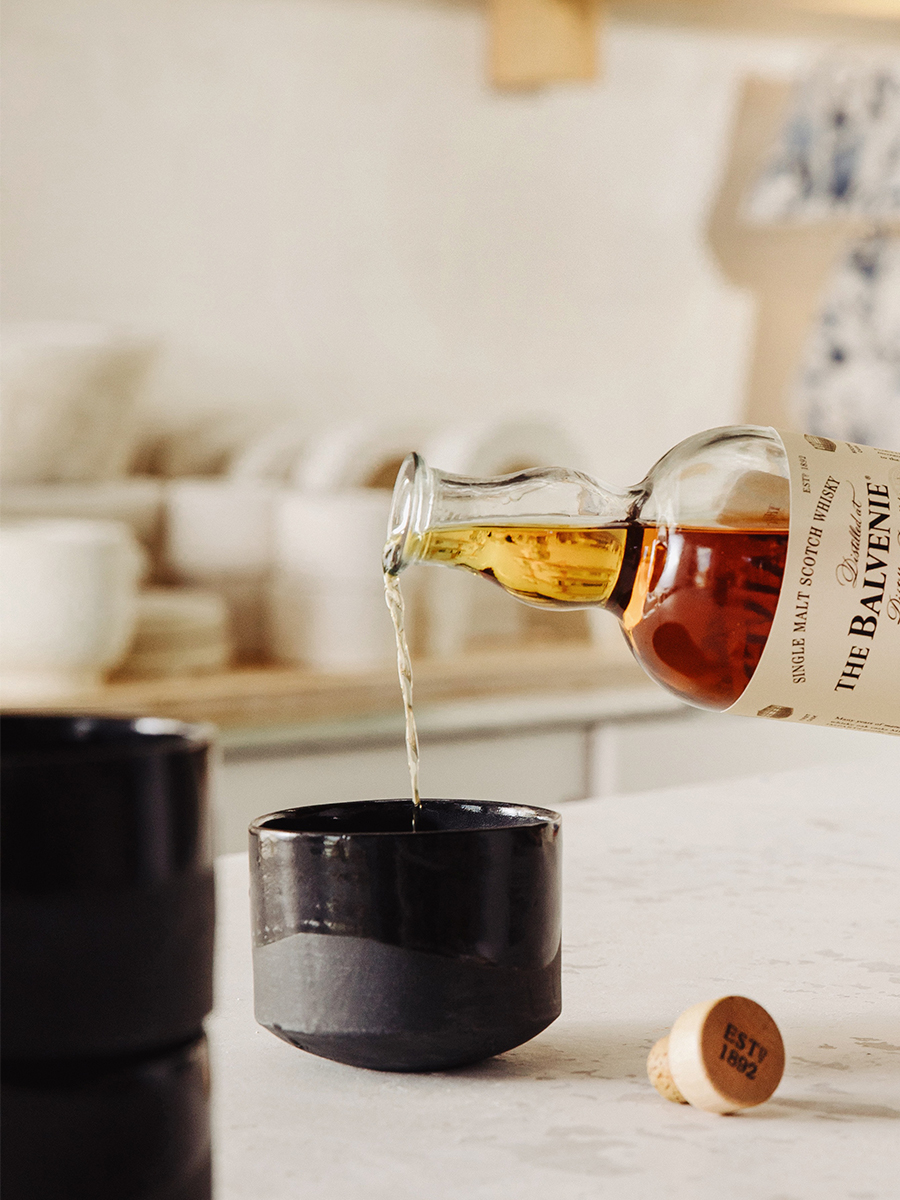 Comprising of two mixed-texture pieces, the Tumbler Set challenges convention, while still encompassing the core elements needed to properly inhabit the whisky. Inspired by the charred insides of the barrels, each tumbler is made from charcoal porcelain. The stone-like feel of the unglazed clay body against the glazed surface provides an interesting textural experience when holding the cup.

The resulting matte and shine contrast represent the warm and hot tools used during the whisky-making process. Lastly, the Tumbler has a slightly tapered edge that concentrates aromas, with a comfort-formed lip and a thicker base for insulation as well as a curved bevel for holding. 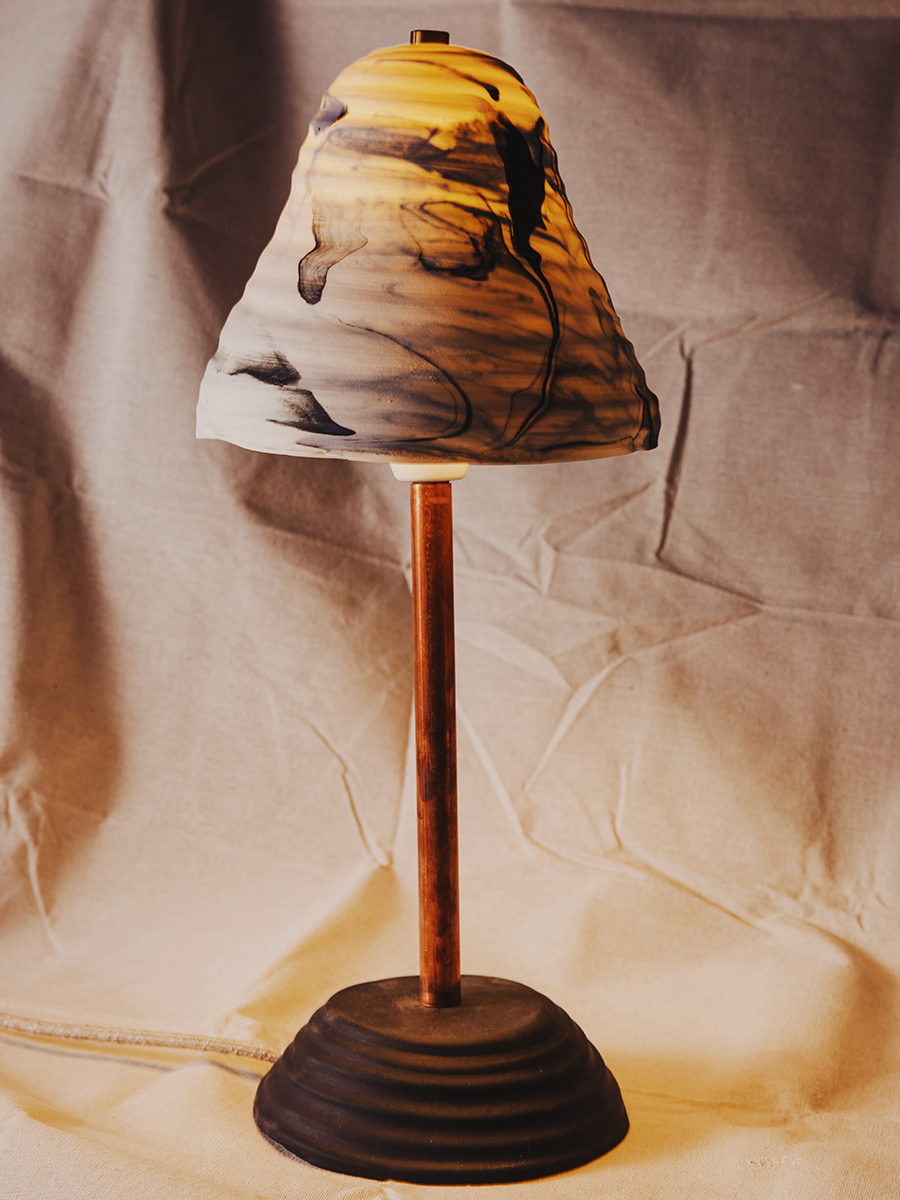 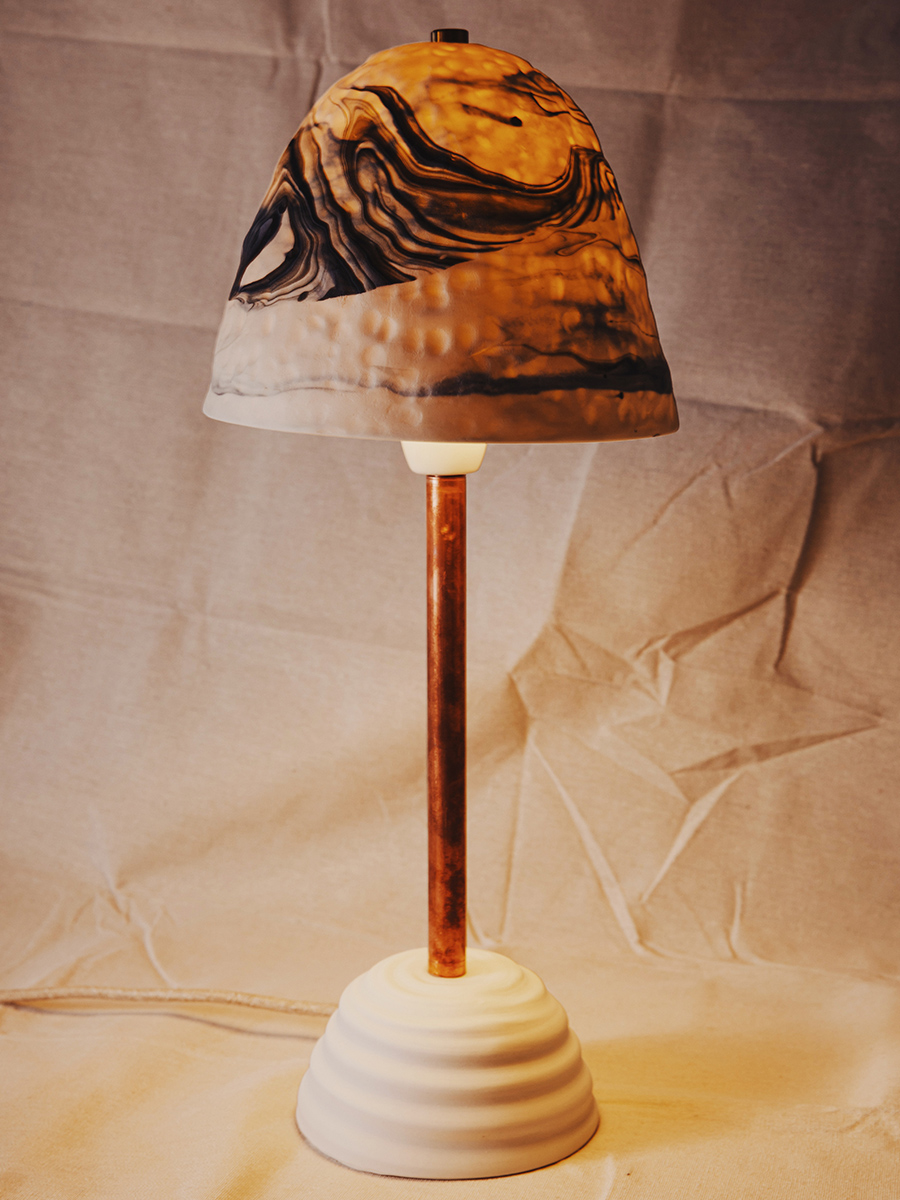 As for the signature Honey Lamp creation, the focus remained on the holistic journey. Much like the process of whisky-making itself, Milly’s work is designed to be enjoyed as a complete piece that encompasses many elements. According to the artisan, the sum of all parts is as distinguished as the whole.

“When I first started dreaming up ideas for the collaboration I instantly thought of the ritual of sitting down to drink a whisky, and the importance of the atmosphere in which it’s consumed. Also the importance of taking the time to sit and enjoy,” she explains.

It’s in these moments that true inspiration shines through. Milly’s unique approach has seen the lamp shape remain unglazed on the inside, meaning the light doesn’t reflect off the structure. Instead, it passes directly through the ceramic, turning the yellow light into a familiar honey glow. It’s a profound exploration of emotion through light.

“When light shines through porcelain it provides a warm, ambient glow – similar to the warm honey colour of The Balvenie. The lamp has downwards illumination, and washes the base with warmth to create a soothing, tranquil atmosphere.”

But there’s more to this story than simply illuminating a lifelong commitment to quality. Like all great dram-fuelled yarns, there are hidden details that will be embellished with time. Inspired by the copper stills used to produce the classic single malt, Dent used a copper sleeve as the rod which suspends the porcelain shade. Like the liquid that fills each barrel, the shades vary from lamp to lamp, with either a wheel-thrown texture or a pinched texture. There are also a couple of special pieces with charcoal marbled porcelain, which is a subtle reference to the natural elements used by the coopers to make the barrels – the water, fire, and wood.

On the outside, the connection seems straightforward. Milly’s stunning Ceramic Tumbler Set makes for the perfect whisky-sipping accessory, but as Blainey right points out, there’s more to this creation than meets the eye. The ceramicist’s art sees clay crafted by hand, form forged through creativity and created with kiln-fire. Compare that to The Balvenie’s trademark single-malt, barley malted by hand, expression forged by tradition and created by charred and toasting the iconic American oak barrels, and you start to see a familiarity at play.

Taking the path less travelled, both Milly Dent and The Balvenie share the commonality of authentic expression. Not motivated by the bottom line, they are afforded the freedom to source the highest quality materials and create something true to their own values. So while destination success might land at the crossroads of creativity and connection, work like Milly’s makes you realise it’s as much about the journey as it is anything else.