Jaden Smith is on a mission to rid the world of plastic waste. And, to be honest, it’s probably about time somebody of his celebrity status was. The fact that plastic water bottles pollute the world’s water is a cruel irony not lost on Jaden, who saw the beaches near his childhood Malibu home become polluted, and felt the need to do something about it.

“I started Just when I was 11 years old”, the affable and enthusiastic son of Will Smith and Jada Pinkett-Smith tells me down a phone line from the Tetra Pak offices in Melbourne. “I was learning about the environment, and I was learning about Pacific patches–the plastic in the ocean that turns to micro-plastic that fish eat and then we eat the fish and the little bits of plastic end up in our digestive system.

“That’s when I decided to reach out to Tetra Pak. That’s how we got here today.” His company, JUST water, which he has now launched in Australia, is the brainchild of Smith (now 20, who raps, acts, and has a penchant for dressing like Batman) and many other celebrity investors (“…people attach themselves to this because they want to let people know, ‘Hey, I want better for the world'”, he tells me, of the many other people involved with his ambitious project).

“Our packaging is 82 per cent made out of renewable resources and not petroleum-based plastics, and that’s a 72 per cent reduction in CO2 emissions, compared to any petroleum based competitors”, he proudly states. Another point that makes JUST different to many other international brands entering the Australian market is the fact that they’re sourcing and producing the entire product locally, instead of having it shipped half-way across the world.

“It was a huge, huge thing for us to make sure that we had a water source here in Australia (JUST is sourced from the springs beneath Mt Warrenheip, near Ballarat in Victoria), and a bottling plant here”, he says.

“Also, Australia is going to be a hub for us for many other markets in the world, that we couldn’t ship straight to from the US or the UK. We are trying to have strategic places all around the world so that if people are demanding it, that it doesn’t have to go far; it can be as close as possible.

His mission to provide the world with clean drinking water has gone a lot deeper than a natty paper bottle sold in first-world countries, though. Jaden, then a teenager, was instrumental in bringing clean water to the people of Flint, Michigan when high levels of lead were detected in the city’s drinking supply. While the government stood by and did little, Smith took over a church, and installed a huge filtration system, free for the residents. 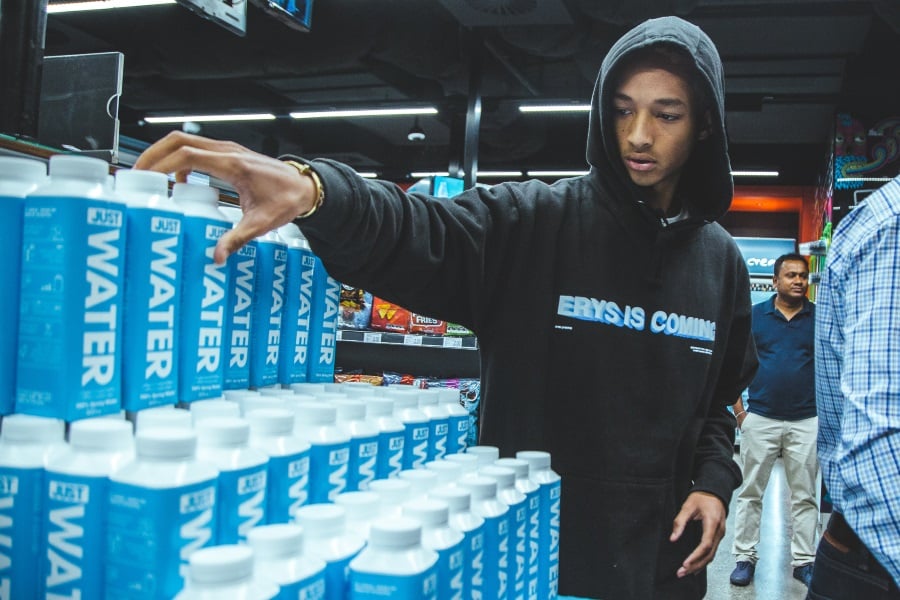 “Me and another co-founder of Just, we started another , and we decided to take a standard water filtration system that people would use to purify water, and we customised it to specifically take out lead.

“People were actually outside of our machine early today, lining up with five-gallon jugs to get water.” The reason for Smith’s insistence to get filtered water happening in Flint as soon as possible was yet another of practicality.

“We put it there because people donate these 500ml bottles of water; millions of them every year. When you’re bathing all of yourself and your children in this bottled water, it’s really difficult to keep pouring bottles of water and using such a little amount of these small containers for showering, for food, for brushing your teeth, for all of these types of things. It’s a lot easier for people to do that type of stuff with a five-gallon jug of water, or multiple five-gallon jugs of water.

“We created that so that people could go there and fill up those gallons of water, all they need is the container and they get it free. Also, if the donations of Flint ever stop one day then they’ll have this backbone of a filtration machine.

“We’re looking to launch in other places that have water sanitation issues like Africa, India, certain parts of Asia. We want to go all over the world and built these filtration systems. That’s a huge goal, long term goal of mine. 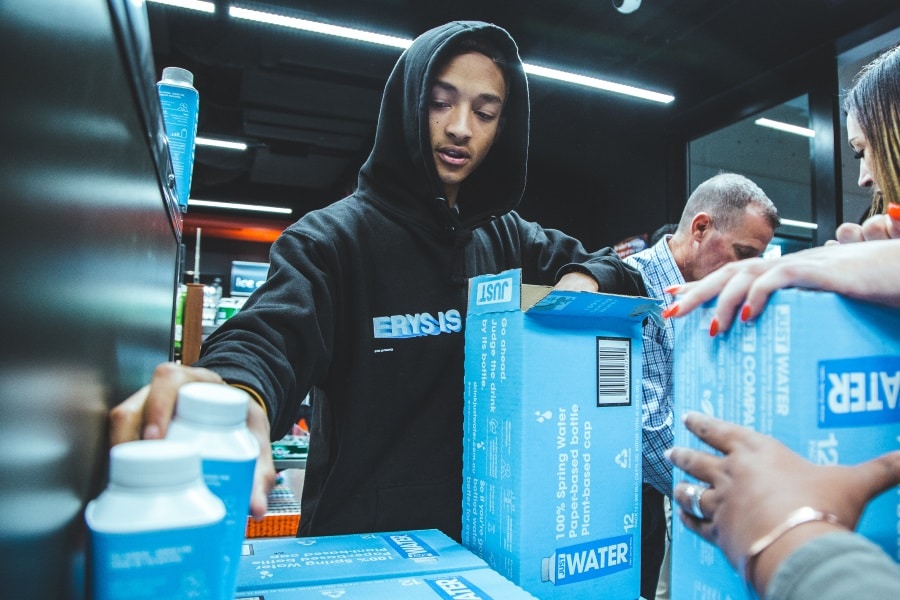 Jaden Smith, while clearly passionate about water, is also known as a fashion icon, with a hand in designing his own label, MSFTS. The fashion industry, however, is famously one of the most wasteful, with textile production particularly notorious for its rash use of precious water. These are facts away from which Smith doesn’t shy, and about which, in fact, has his own ideas for progression.

“We’re going to have to start embodying the idea of smart factories; factories that take the natural waste from the manufacturing of what they’re doing, and then use that waste to go back into the actual product in some type of way”, he states. “That’s the first thing; you’re going to have to change how the factories run.

“The second thing, fashion is going to have to embody the actual meaning of thrifted clothing, and not try to recreate thrifted clothing. That’s something that I do with MSFTS Couture, I take old t-shirts and I take old pants, and I put them together. I take two old things, cut them up, sew them back together and then make something new.

“That’s something that I’ve even done with my merch (Jaden is an accomplished musician who regularly plays large crowds). Instead of taking new, fresh, black shirts, I buy old ones and I print over them and then I sell them again; I don’t need to make anything new.

“Fashion is going to have to accept thrift because there are so many materials out there in the world. Fashion is one of the most wasteful industries in the world and we have to use that, and take that waste and create new things.” 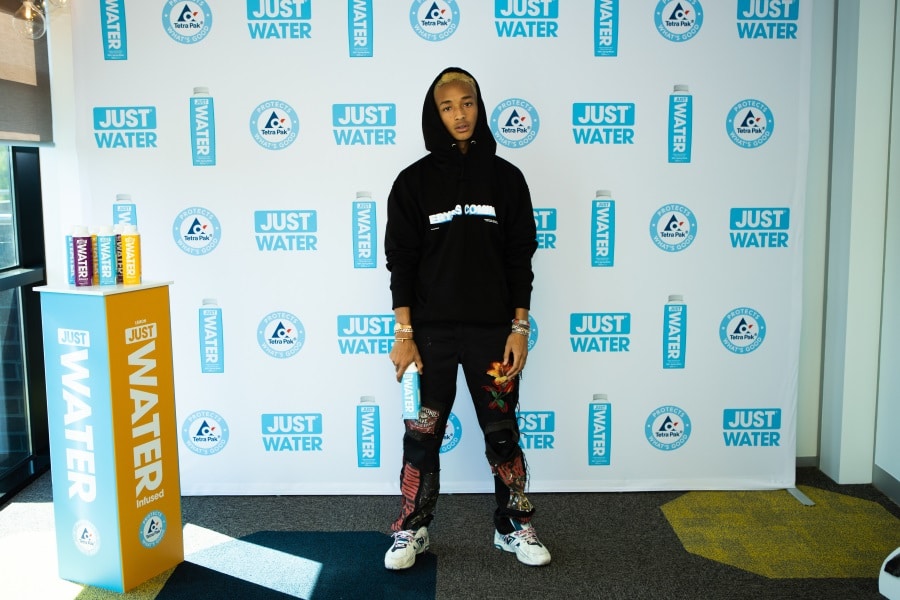 And as for any advice for other young entrepreneurs wanting a start with their own socially responsible idea?

“One of my favourite movies ever is the movie I did with my dad, The Pursuit of Happyness, because it’s about the story of Chris Gardner, who was homeless with his son, and then actually making it happen. At the end of the movie you find out that it’s a true story.”

One can’t help but feel that being the son of one of Hollywood’s biggest stars of all time doesn’t hurt either, but Smith’s enthusiasm to do what he can to make the world a better place is admirable, and a shining beacon of philanthropy for young people, many of whom understandably feel helpless when it comes to the human impact on Planet Earth.

Perhaps, at least in terms of water, Jaden Smith is the hero we need right now.