What makes the new Porsche Cayenne Coupé special in a market flooded with performance luxury SUVs? Man of Many hit the open road to find out.

Porsche have been innovators in the Performance SUV segment since the very first Cayenne back in 2002 so it seems odd that it’s taken this long to release a Coupé version. Will Porsche be able to maintain its stronghold over their competitors with a chop-top Cayenne? 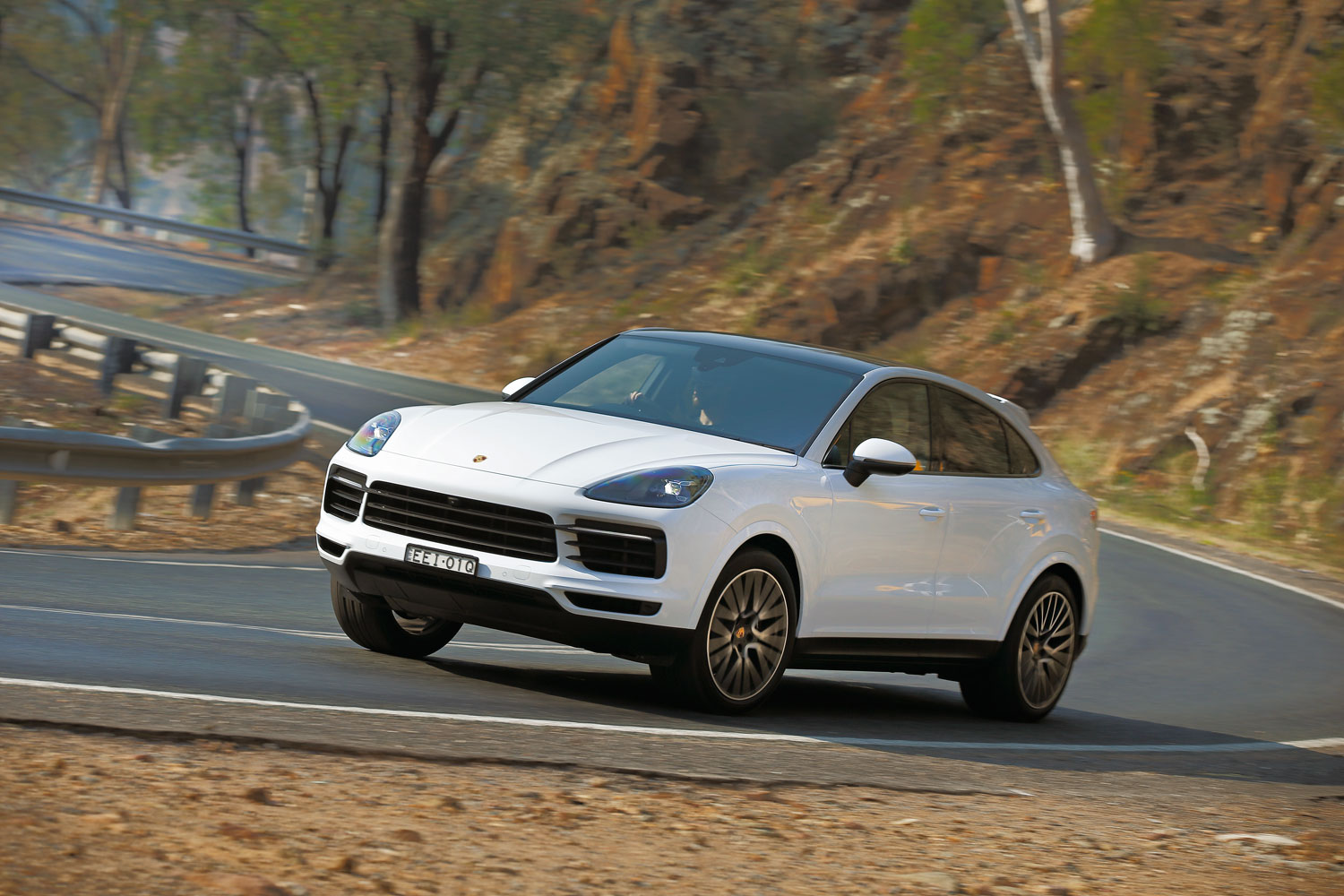 It’s hard to believe that Porsche has been building the Cayenne for almost 18 years now and has almost single-handedly created a whole new segment of 4×4. Even with the release of the much cheaper and popular Macan in 2014, the Cayenne range still showcases the pinnacle of luxury and performance when it comes to SUVs.

The question is, what does the new Coupé represent for the brand and does it do the Cayenne badge as much justice as the regular model?

Let’s address the elephant in the room; overall, there’s not a lot of visual difference between the Coupé and the regular Cayenne at first glance.

Is it lazy design? Some may think so, but at the same time, after spending a bit of time with the Coupé you start to realise that there’s definitely a bit of attitude and spunk that comes with a slightly more rakish roofline. 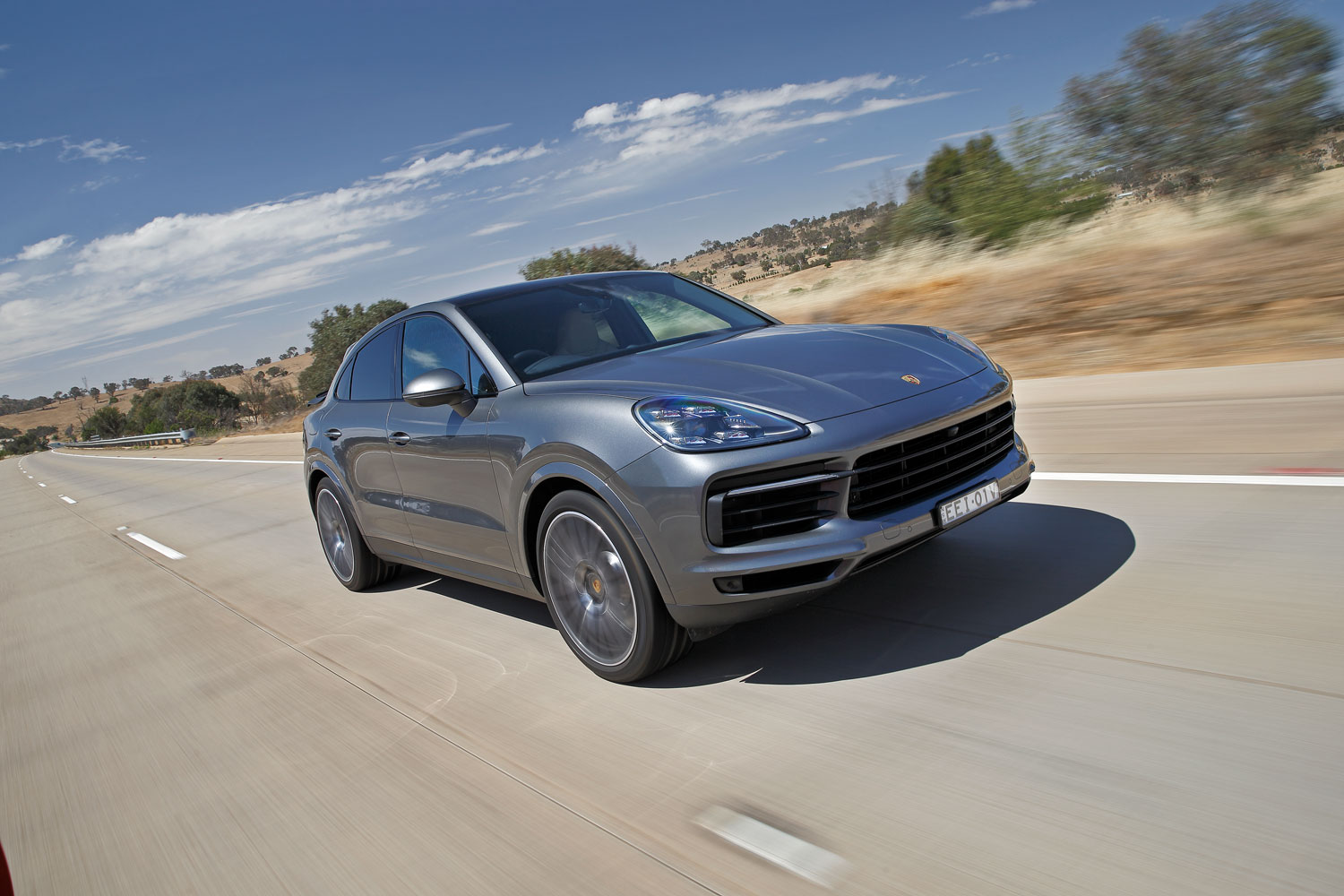 You might put it down to marketing, sure. But again, with the massive success of the Macan over the last 5+ years, there’s definitely some merit in trimming the fat and keeping it fresh beyond 2020.

Starting with the exterior and focusing on the aforementioned roofline, there’s actually quite a dramatic difference to the whole rear quarter when compared to the previous model. The C-Pillar seems to do most of the talking for the new sporty image mainly due to the effect it has on the rear quarter window shape. 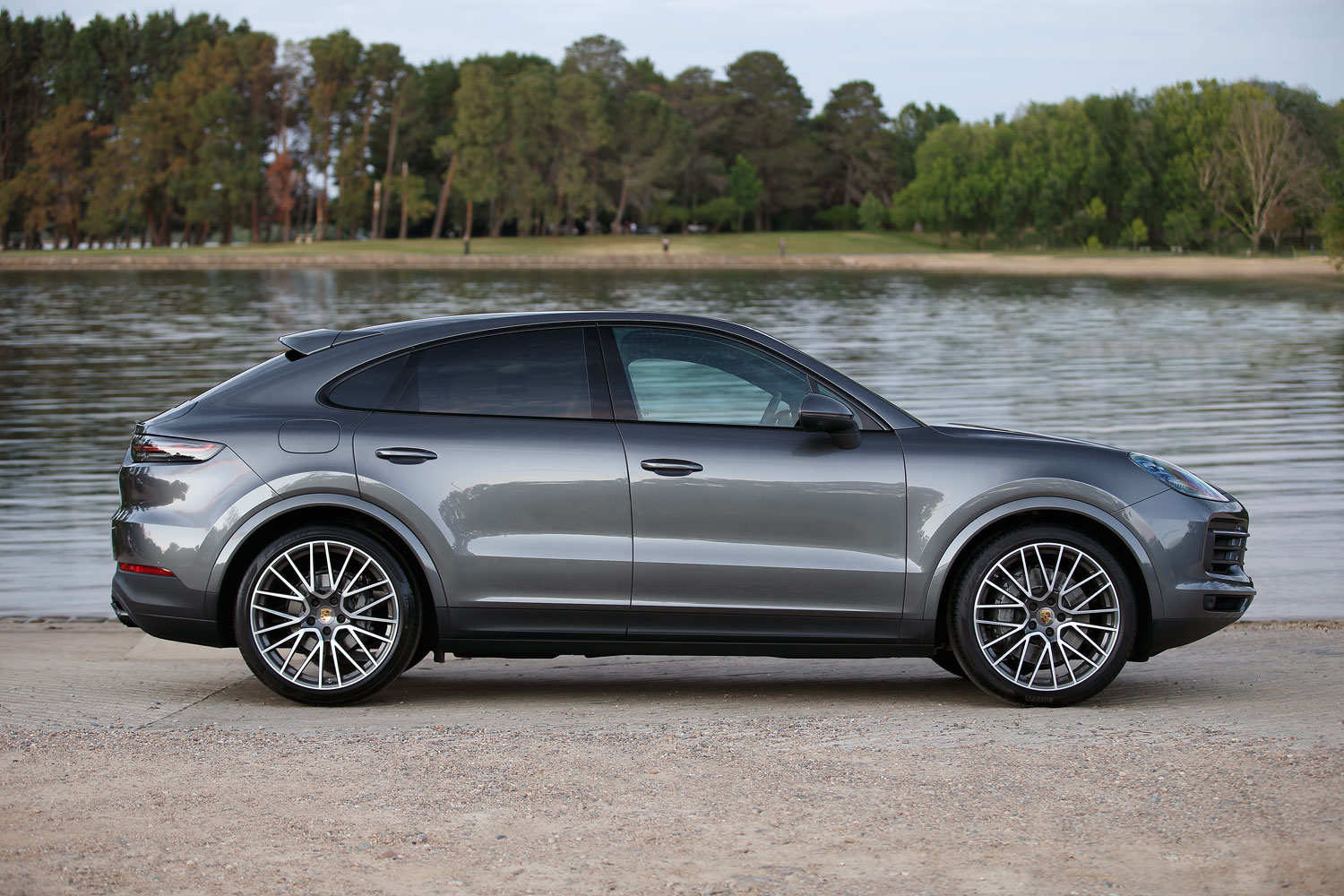 The side profile of the Coupé looks more fluid and youthful compared to the regular Cayenne which you might argue looks a little bit more ‘mature’. To some people that might not be such a bad thing. 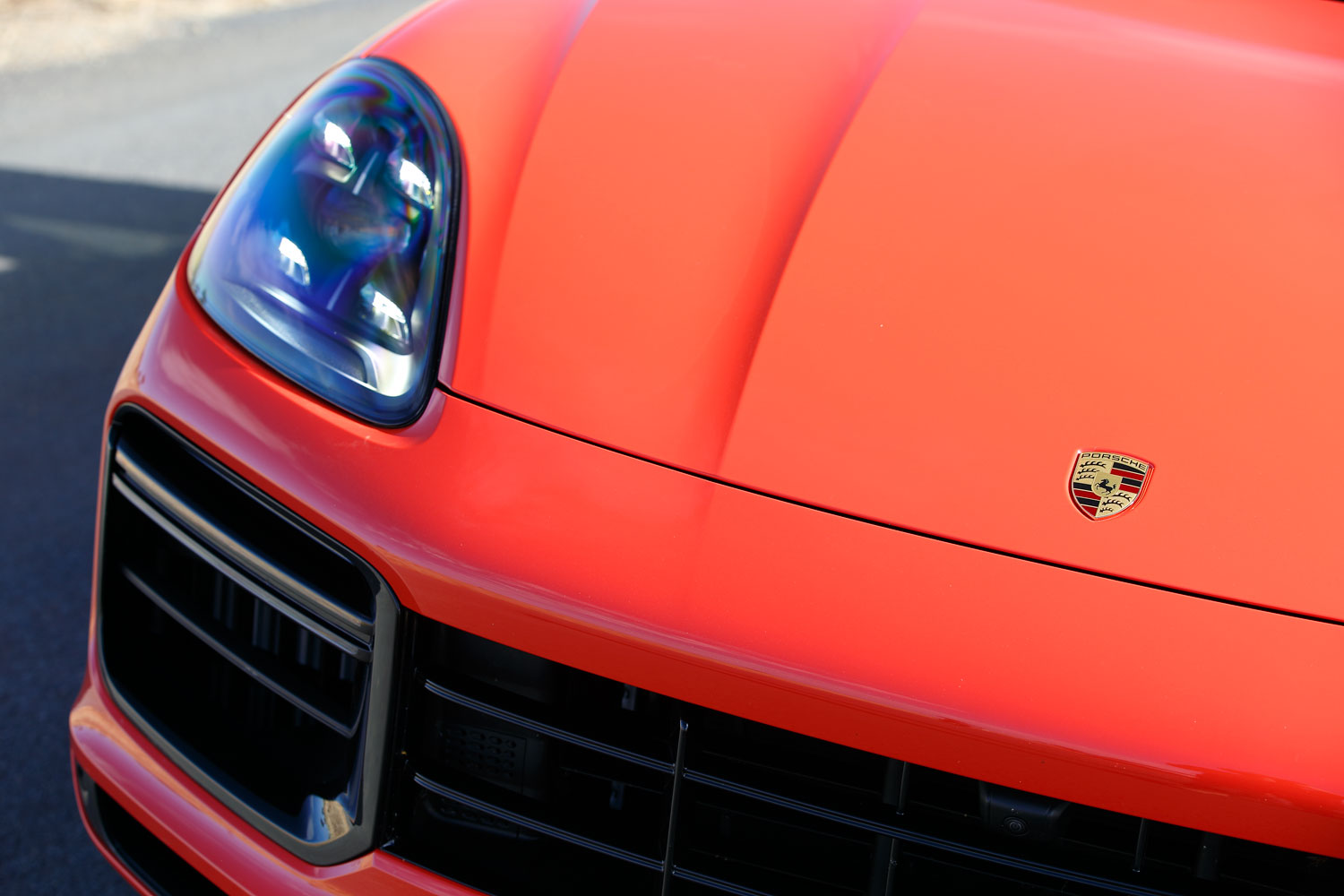 The front-end is mostly unchanged and seems to stick with the global design rules that Porsche have strictly enforced since the ditching of the ‘fried egg’ style headlights of the first generation of the Cayenne in 2010.

The rear of the Coupé, especially the light design, adheres to the most recent brand identity of the company with the full LED strip running the entire width of the vehicle. One thing Porsche does well is interiors. From the purposeful, race-inspired interior of the 911 range to the plush, pillowy luxury of the Cayenne, it’s always a delight to get behind the wheel or put a bum on a seat.

There’s plenty of room as you would imagine, but also as expected, rear headroom does suffer a little due to the Coupé shape. Although Porsche have countered this with the rear seating position 40mm lower than the regular Cayenne. 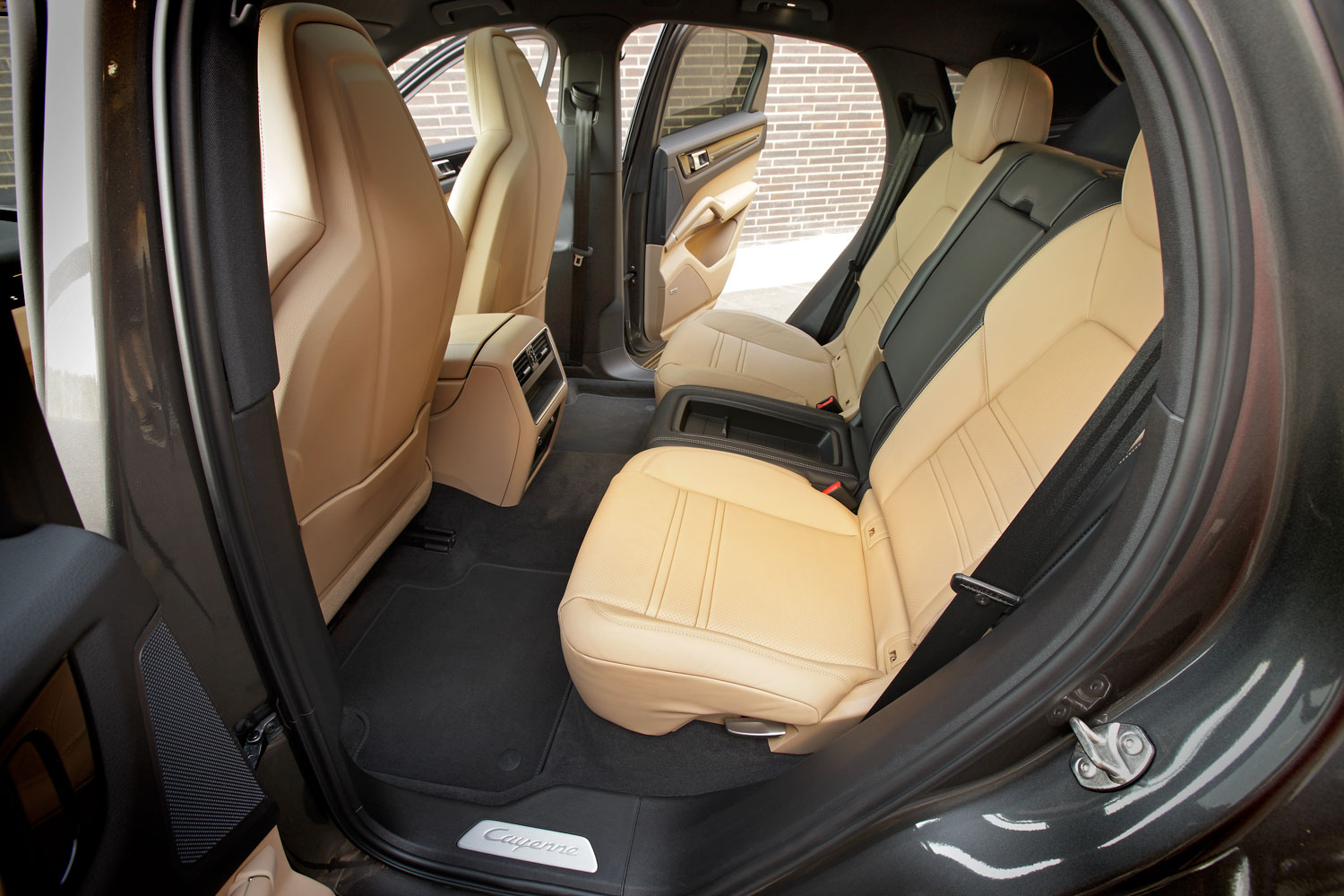 One thing to note with the Coupé is that it is now a 2+2 configuration, perhaps another sign that this car isn’t so much for the ‘family vacation’ and more for that weekend trip to the ski fields with the other half.

Comfort Seats are also a no-cost option across the range. All models come standard with sport seats (the Turbo has an adaptive version of these) but the Comfort Seat option offers 14-way adjustability with memory package at no extra cost. 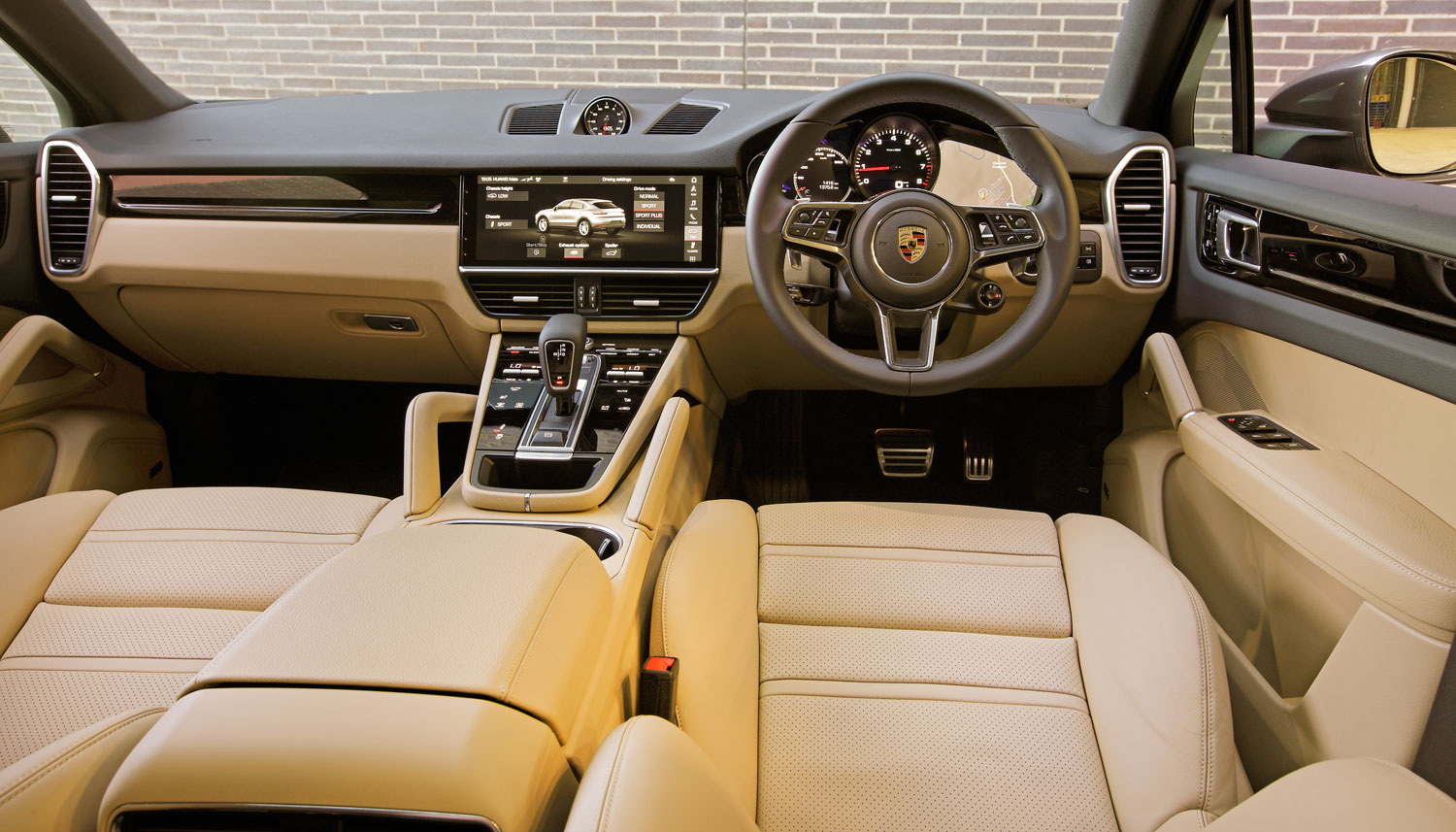 Overall,  the coupé offers subtle design cues that do well to differentiate from other models as well as delivering the latest from Porsche in tech and performance development.

Speaking of performance, the real fun begins when you start speccing up your Cayenne Coupé, with buyers being spoiled for choice with 3 main variants to choose from and a surprisingly large list of standard equipment. 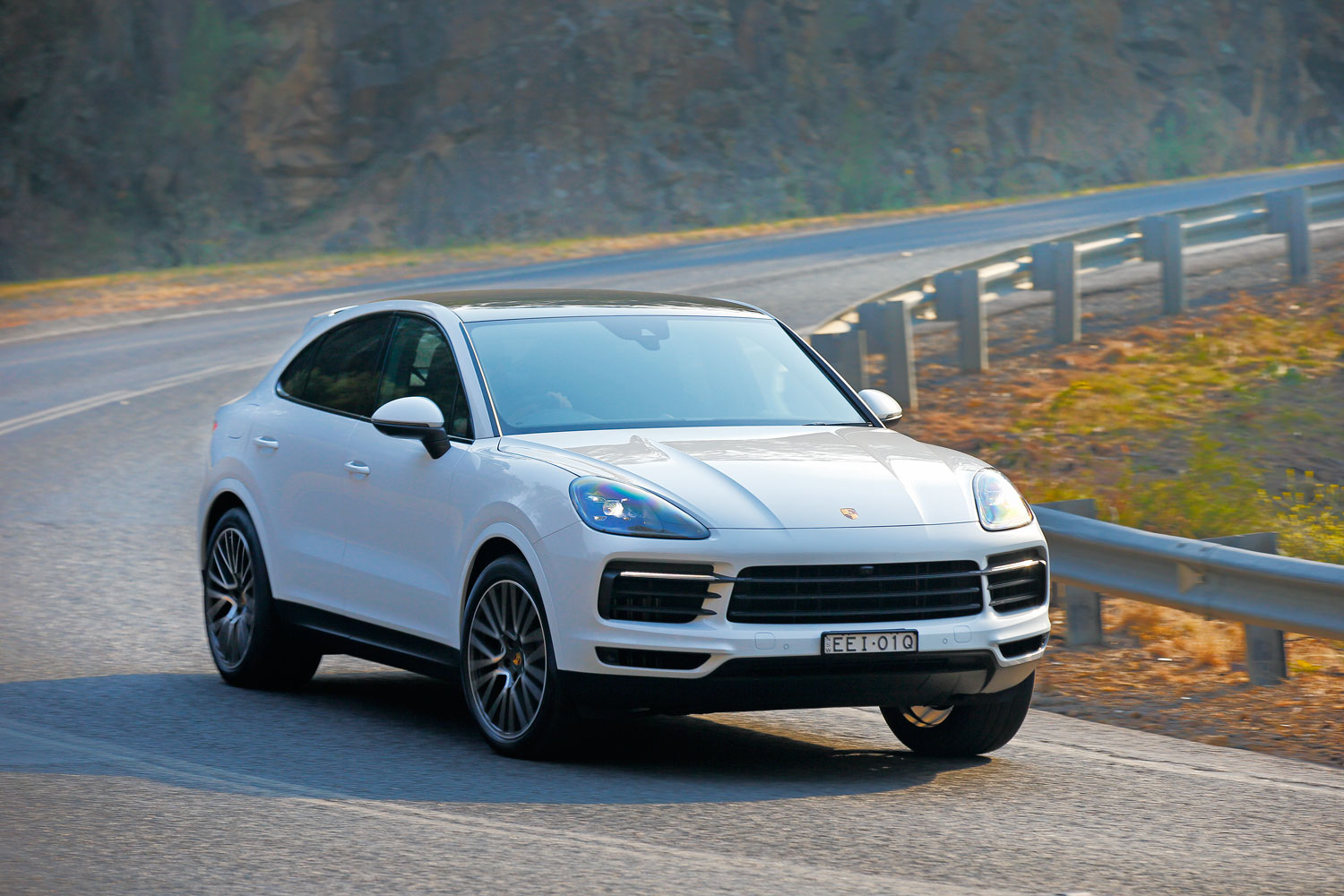 The base or entry-level offering is simply named the Cayenne Coupé and comes equipped with a single turbo, V6 engine coupled to an 8-speed Tiptronic gearbox which is standard across all 3 variations.

As expected from the flagship Porsche SUV, even the base edition features plenty of power and torque for every-day duties with the occasional jaunt into the mountains or ski field. 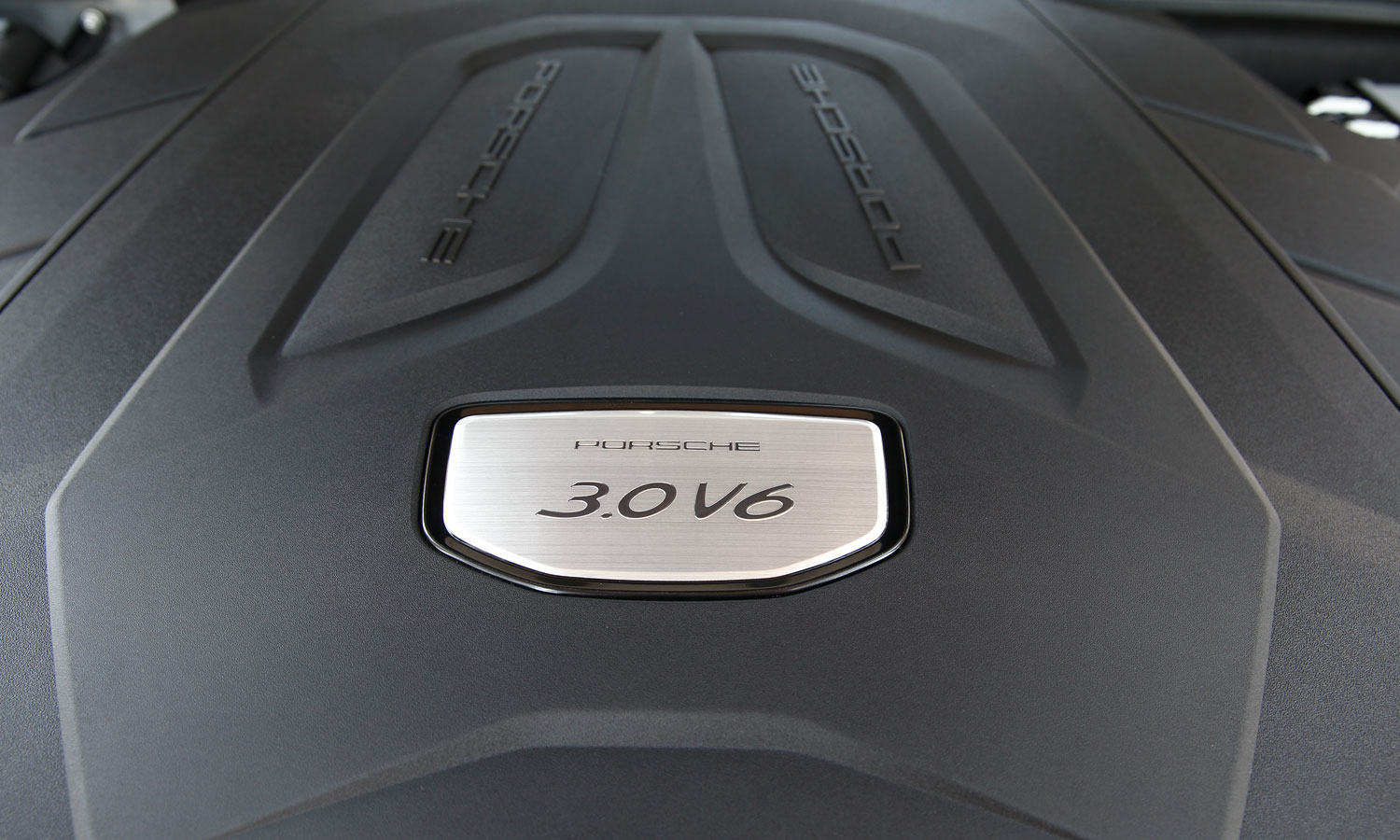 Interior fit-out is similar across all three variants, however as expected, there’s a few empty boxes on the options list for the base model. Options like heated and ventilated seats, quad-zone climate control are all left out, but surprisingly, there’s not that much you’re missing out on compared to higher trim levels. We tested the whole range in the beautiful surrounds of Canberra, Australia and the Cayenne Coupé held it’s own quite well around town as well as on the winding country roads. The single-turbo V6 does a good job of getting the just over 2-tonne SUV up to speed. Saying that, 0-100km/h in 6 seconds isn’t exactly putting your head into the back seat. The next level up brings us to the S model, which is still powered by a V6 powerplant, but this time offers forced induction in the form of twin turbos.

This is the point where the performance heritage of Porsche starts to show itself with the twin turbos delivering that extra boost needed. An improved 0-100km/h time dipping down to 5 seconds flat places the S closer to impressive non-SUV performance figures. 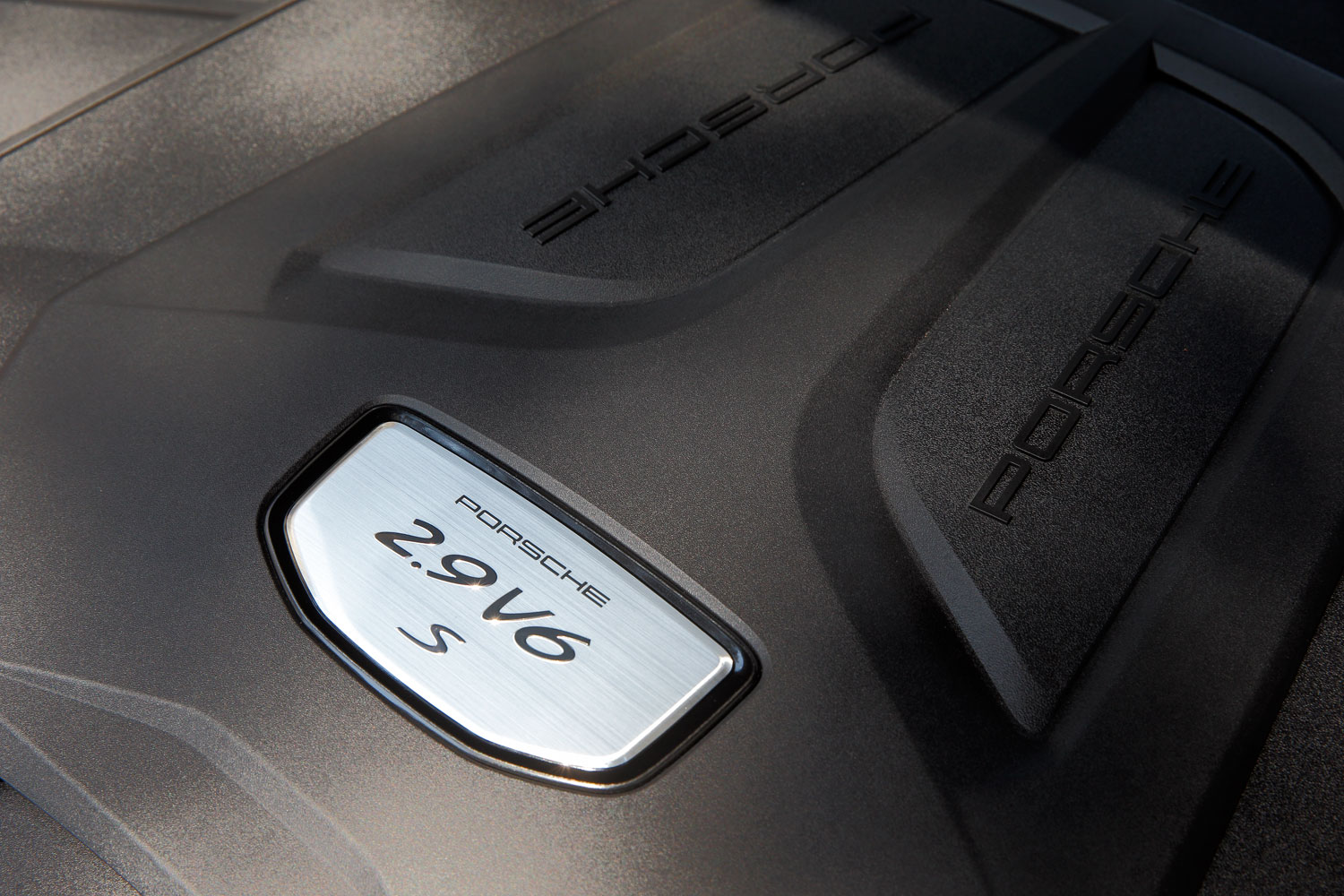 The S is also where you’ll start seeing more performance improvements outside the engine bay with larger brakes as standard. The front pair run 390mm diameter rotors and 6-piston calipers vs. 330mm, 4-piston on the standard model. We also see the introduction of adaptive air suspension as standard on the S model and above. In terms of road feel, the S seems to bridge the gap between a ‘nice place to be’ of the entry-level model, to the all-out performance of the Turbo model. Steering is surprisingly sharp for such a large car and it seems odd to say it when not talking about a 911, but you can really feel the engineering heritage of Porsche in this model. 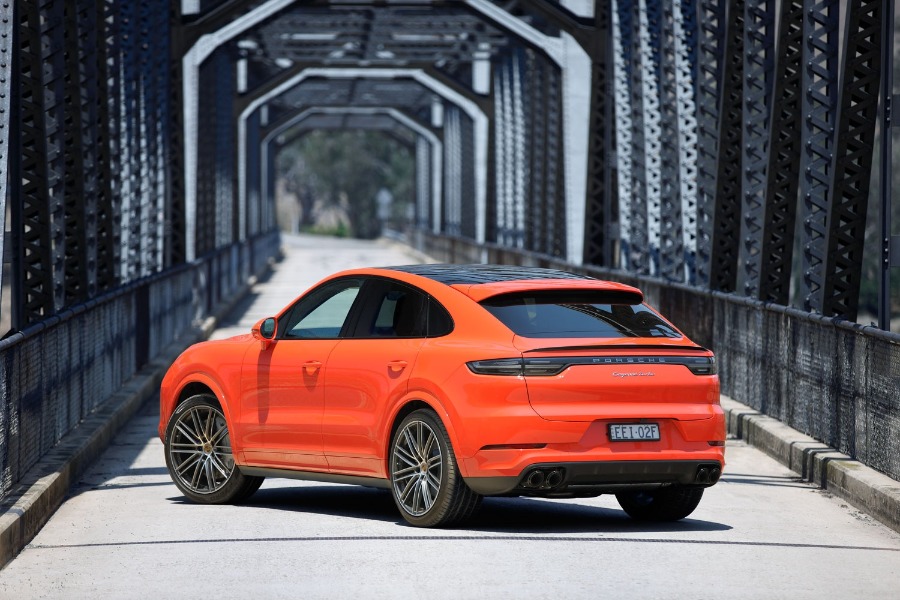 The Turbo is the top of the line Cayenne Coupé (excepting the upcoming Turbo S E-Hybrid) and enters into the realm of insanity, being powered by a 404kw (550hp) twin-turbo v8. Torque is off the charts too with a staggering 770nm, making the Turbo an experience like no other.

It goes without saying that the twin-turbo V8 projects the Cayenne Coupé into a whole different category, with a 0-100km/h time of 3.9 seconds, putting this hefty (2200kg) SUV in the realm of supercars. 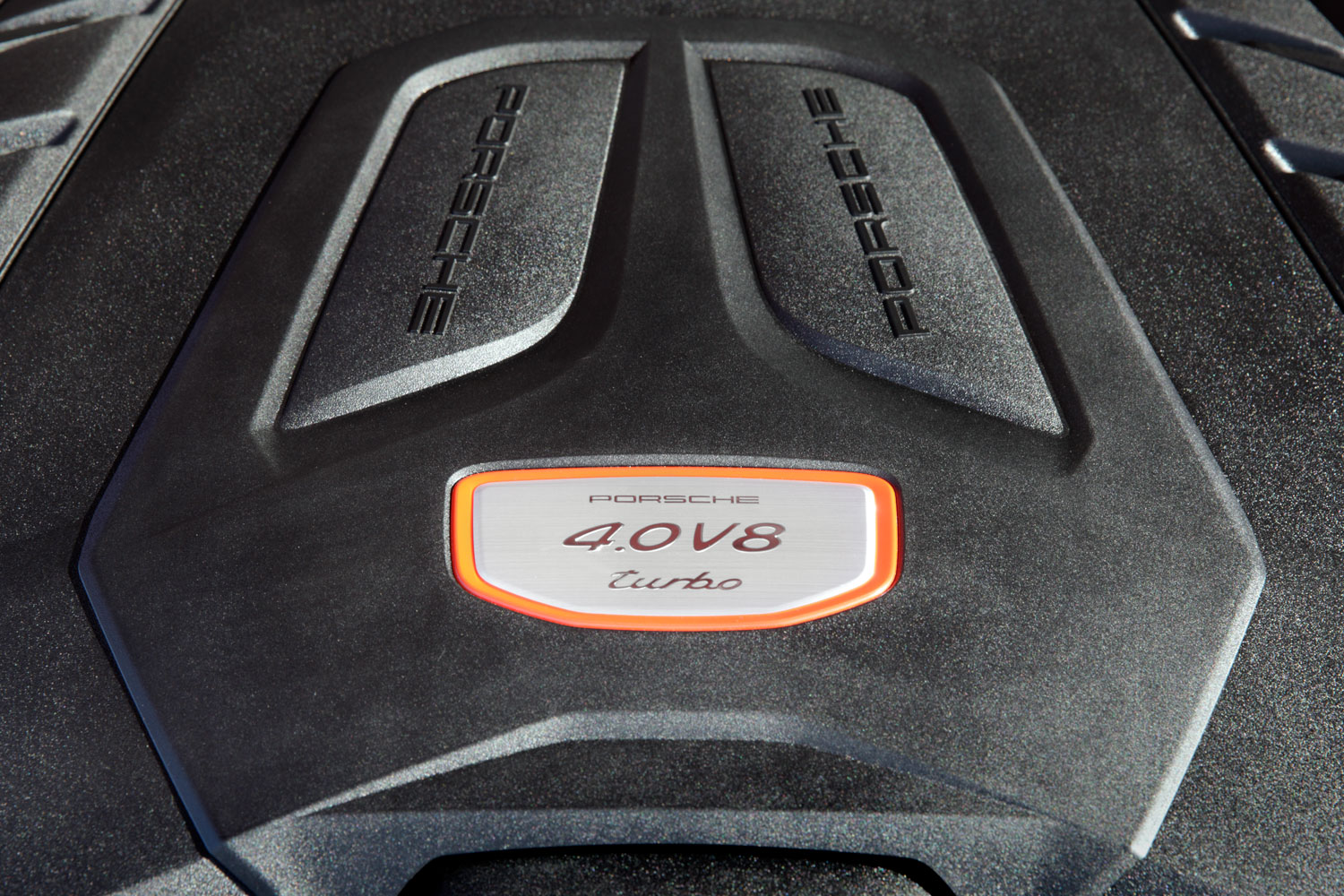 Wheels are 22-inch 911 Turbo Design wheels including wheel arch extensions in exterior colour, rounding out an aggressive side profile for the top of the line Turbo Coupé. 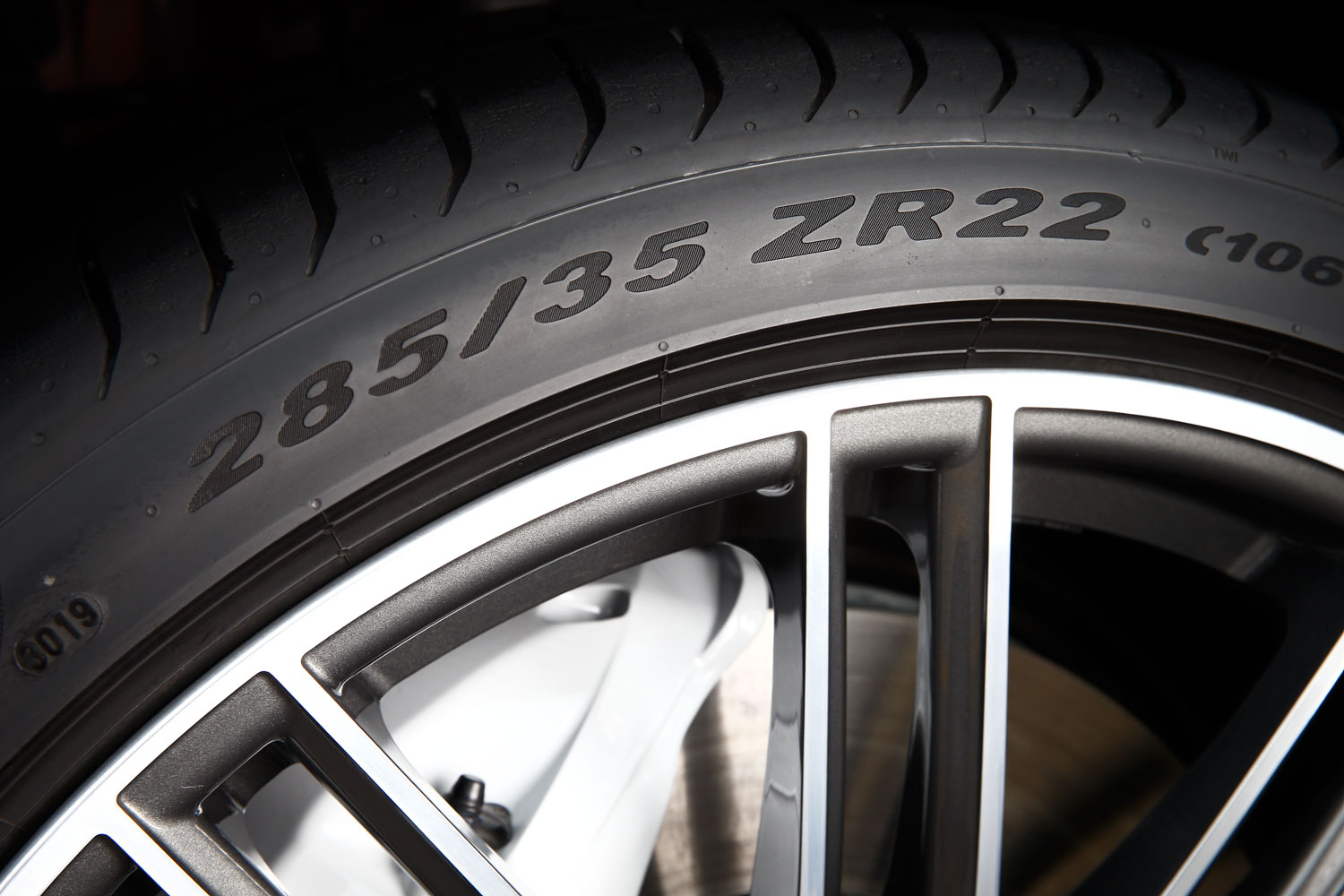 Impressive styling aside, the thing that really makes the Turbo stand out from the V6, is the deep, throaty growl from the twin-turbo V8 engine. It’s certainly something to behold in person.

All 3 Coupé variants come standard with Porsches Sport Chrono Package which offers 4 different drive modes on the steering wheel. Drivers can choose between Normal, Sport, Sport+ and Individual where you can set your own preferences. 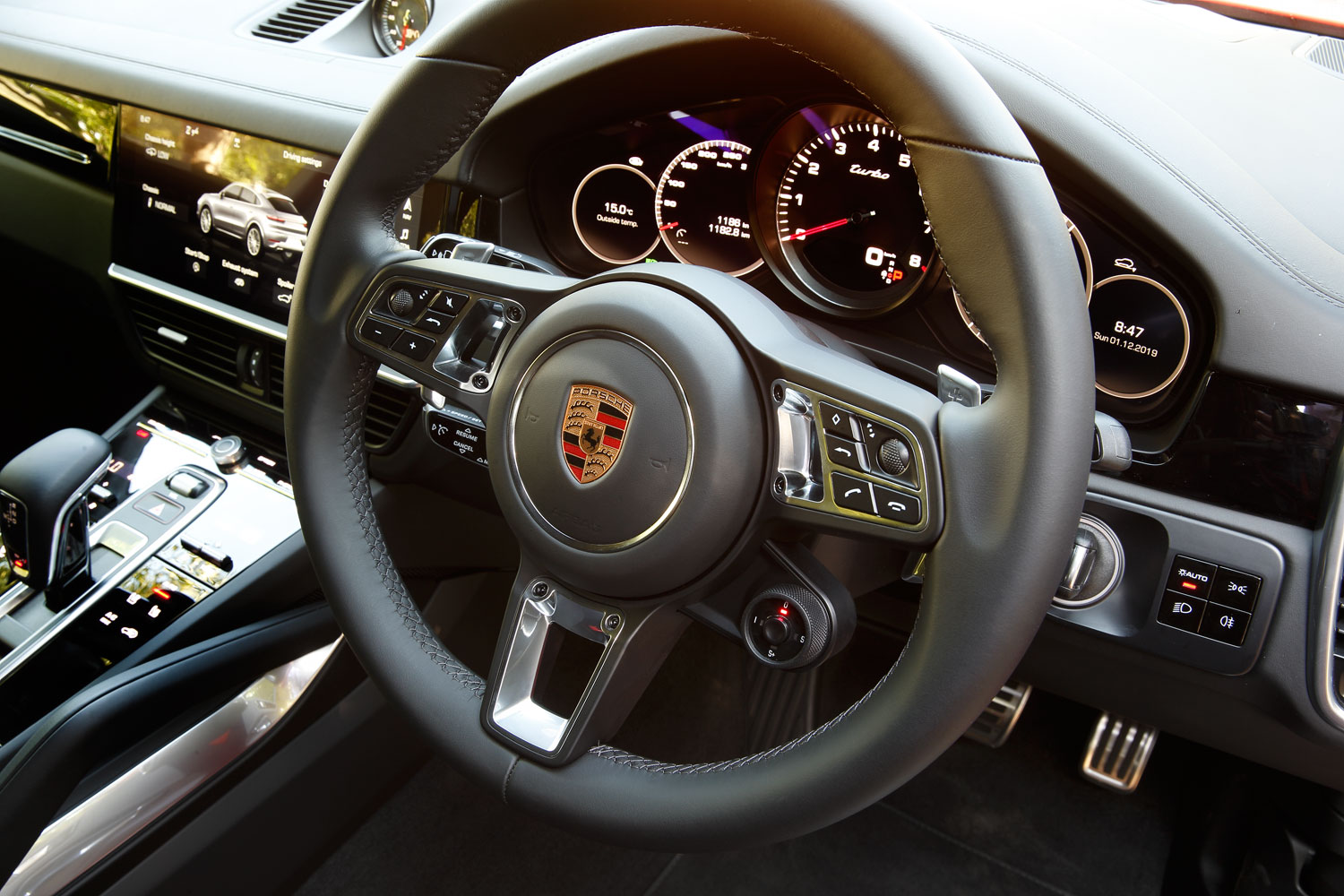 Sport+ delivers maximum performance by stiffening the suspension as well as sharpening up throttle response. This is also the mode that gives the Turbo edition its incredible sound when opening the throttle.

The real fun is when you discover the ‘scramble’ button in the middle of the drive mode selector. Hit this button and you have 20 seconds of extra power and response which, on the Turbo model especially, makes for an incredible driving experience. 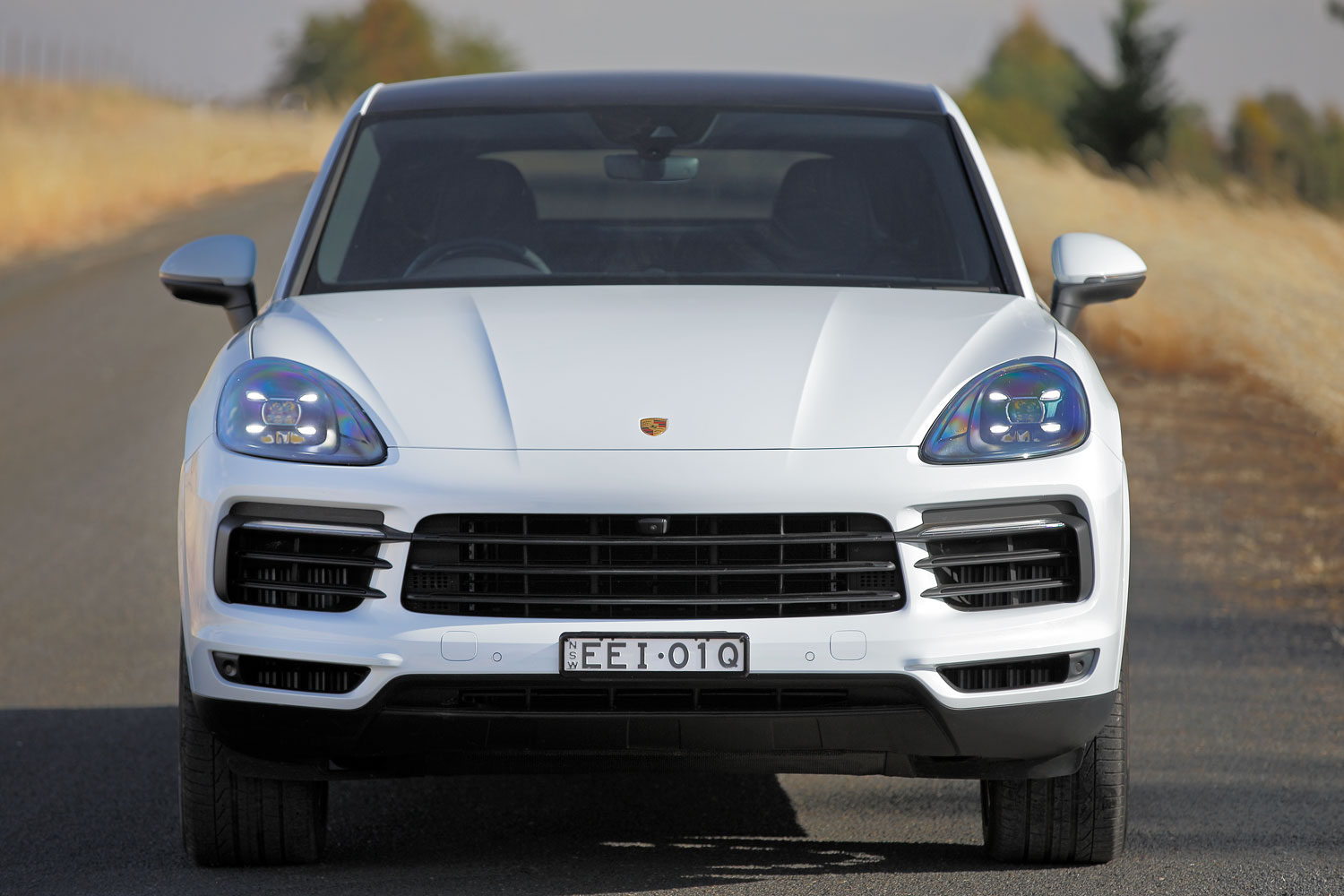 What Coupé Should You Choose?

With the word coupé now becoming weirder every time you say it, let’s break down which model would realistically be the best to own.

Consider the pricing of the three. With the base model starting at AUD$128,400 and the Turbo model starting at a whopping AUD$254,000, it was always going to be a tough decision to fork out the extra for the V8. Saying that, for the noise and insane performance that has no business coming out of an SUV, if you can stretch the budget, then go for it. The S, however, seems to hit that sweet spot. As mentioned, this is where you start to really experience the engineering prowess that only Porsche seem to be able to deliver, even in an SUV.

At a starting point of $166,000, it’s a great way to own a comfortable, luxurious SUV with enough performance to warrant that Porsche coat of arms adorning the bonnet.

Resident rev-head and lover of all things with four wheels.

Read more about Brendan About Man of Many
Latest News