At UFC 272, MMA junkies witnessed the long-awaited grudge match between the former friends-turned foes. Apex welterweight fighters Colby Covington and Jorge Masvidal opened the flood gates and let the bad blood pour out in a non-title-contender bout. Though, Chaos prevailed to outwrestle Gamebred and remain the undisputed frontrunner in the division — of course, behind the 170-pound king Kamaru Usman. Don’t get us wrong, Covington might not be most fighters’ cup of tea, but the man’s dominance in the division is unrivalled. And let us not forget the bloody co-main bout between former lightweight champion Rafael dos Anjos and Renato Moicano.

You’ll also like:
Russian Billionaire Roman Abramovich to Sell Chelsea FC to ‘Benefit Ukraine’
Brad Pitt Beats the Living Sh*t Out of Literally Everyone in First ‘Bullet Train’ Trailer
‘I Can’t Be Hit Like This’ – The Fight that Almost Cost Sugar Ray Leonard Everything In what was arguably the biggest fallout of friendship in the sport, the Miami-natives teed off at the Las Vegas T-Mobile Arena. The dogfight of this magnitude between the former BFFs happened to reel in the 11th highest pay-per-view in the company’s history, according to UFC boss Dana White. With both fighters going the distance with effective striking, kicking and trash-talking, the grappling, wrestling and octagon control was what had Covington win the bout.

The welterweights came out of the gates aggressively in the opening round. Chaos unloading punches, Gamebred exuding leg and body kicks before the betting favourite, Covington, landed a takedown. The downed Cuban was in for his first ground-and-pound and kudos to him for escaping the many rear-naked choke attempts of his foe. Mr 3 piece and a soda eventually got to his feet for some tit for tat with kicks and punches before the bell.

After a shining performance, @ColbyCovMMA wants the Diamond next 💎👀 #UFC272 pic.twitter.com/UeNfRTbWou

Round two saw the fighters pick at each other with jabs, leg kicks, elbows, clenching by the cage and even an inadvertent knee to the groin of Masvidal. But after a brief recovery for the 5-second finisher, they began to swing widely at the centre of the octagon. Chaos secured another takedown, followed it up with a ground-and-pound and more attempts at the rear-naked choke. But the underdog was relentless in his evasion and eventually got up for some serious exchanges. Touché.

Had there been soul-crushing rounds for Masvidal, it would be number three and four. Covington banked another takedown and capitalised with heavy elbows and more ground-and-pound. Masvidal did escape momentarily, but the gas tank had been sapped. In the final round, Colby rag-dolled his opponent and unloaded a lethal mix of strikes to the body and head to close out in a unanimous decision win. In the octagon interview, Covington spat some slants, gloated over his dominance and even called out lightweight contender Dustin Poirier, à la Nate Diaz. Think that’ll be a stylistic match-up or a one-way traffic win for The Diamond? 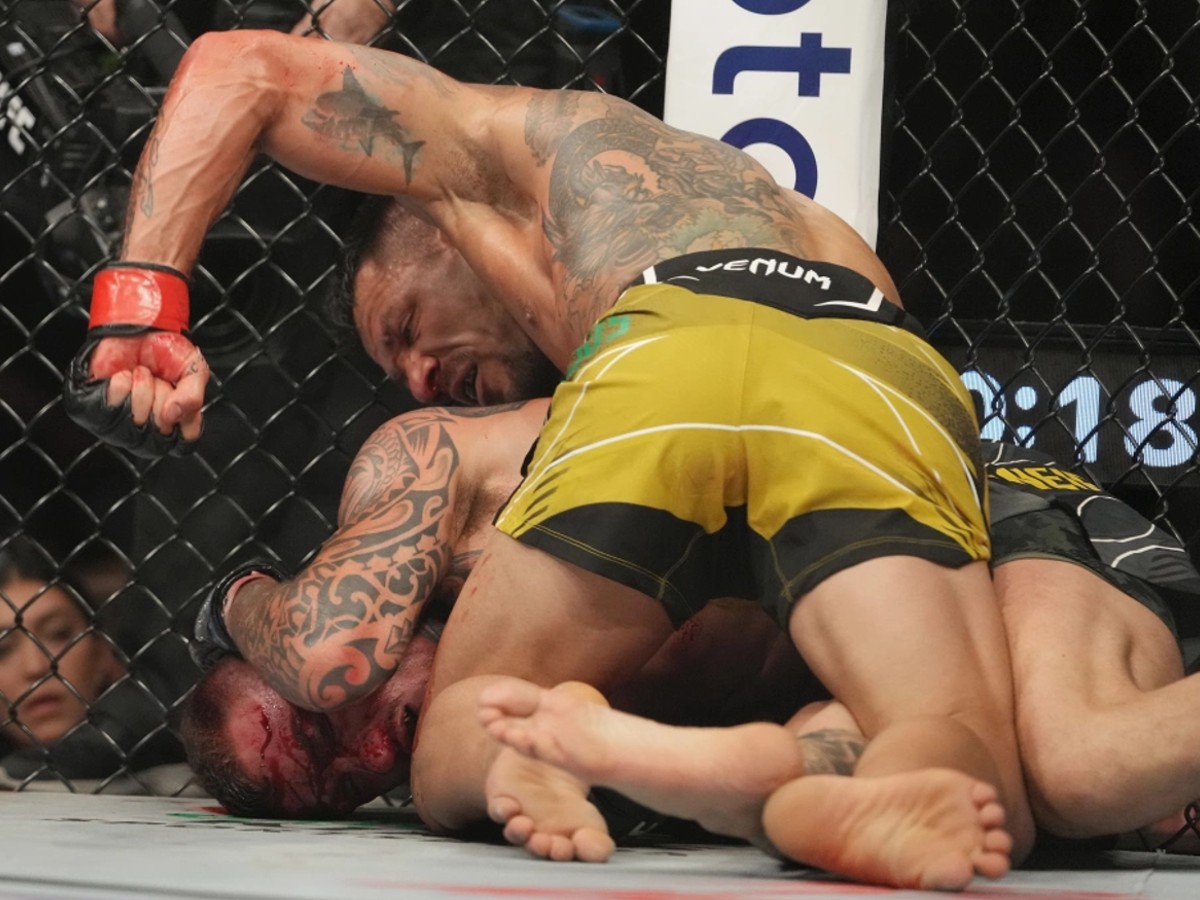 It was a surprise to MMA buffs that this bout wasn’t awarded Fight of The Night or Performance of The Night for either fighter. Nonetheless, Renato Moicano was to go to town with RDA when stepping in for Rafael Fiziev on five-days notice, and he couldn’t have exhibited more heart in the bout. While stylistically divergent, Dos Anjos’ grappling and ground-and-pound game (as well as striking) eclipsed his fellow Brazilian.

The five-round fight showed the former lightweight champ exude many of his patented leg kicks, jabs and swings. His relentless pace enabled him to mercilessly ragdoll Moicano in the first and second rounds. And to be fair, Moicano did exchange blows, attempt a takedown and muster defence and offence, but it wasn’t enough to win the score of the judges. In fact, Dos Anjos’ ground-and-pound was so long and lethal in the second round that Moicano’s left eye was almost swollen shut. But the homie was too lionhearted for that doctor-stoppage baloney.

And before being taken down and grinded out (yes, again) Moicano had some success in striking. By the end of the fourth round, Moicano’s face was leaking and smeared with blood and was given the benefit of the doubt by referee Marc Goddard and the UFC doctor to commence fighting. And interestingly, Moicano got back on his horse in that round but was soon back on the canvas. Moicano got back to his feet and the two exchanged widely in the final moments of the dust-up. In what appeared to be a clear victory, the judge scored the contest 49-45, 49-44 & 50-44 in favour of Dos Anjos. The Brazilan also expressed profuse sportsmanship and camaraderie in the octagon interview and his wish to fight Masvidal (and the crowd couldn’t have been more approving).

You’ll also like:
Russian Billionaire Roman Abramovich to Sell Chelsea FC to ‘Benefit Ukraine’
Brad Pitt Beats the Living Sh*t Out of Literally Everyone in First ‘Bullet Train’ Trailer
‘I Can’t Be Hit Like This’ – The Fight that Almost Cost Sugar Ray Leonard Everything