Who’s ready for some diet and exercise, Conor McGregor style?! Presuming you’re on board, prepare to take a seriously disciplined approach toward eating and working out. On the plus side, there’s still room for the occasional beer, liquor, and cigar. Indeed, even a shredded MMA fighter needs his vices.

Given his ongoing slate of headline-grabbing antics, it’s quite easy to forget that Mr. Notorious is supremely dedicated when it comes to diet and exercise. After all, this is the same guy who recently punched an elderly stranger in an Irish pub, and once threw a guardrail at a UFC bus. That’s not to mention his endless attempts to raise brand awareness by way of flashy publicity events or product releases. Oh, and let’s not forget McGregor’s proclivity for fancy Rolex watches or his customised Versace robe. The list goes on.

However, to peer beyond the distractions is to discover almost ironic amounts of self-control. That said, the man doesn’t do it alone. Assisting in the food department are people like Georges Lockhart, also known as Conor McGregor’s diet coach. The former US marine turned hardcore nutritionist helps not just McGregor, but various UFC fighters make the most out of their respective calorie consumptions.

No matter who Lockhart is advising, meanwhile, one thing remains fundamental to each client’s overall health and success: consistency. That certainly rings true for McGregor, who only eats specific types of carbs and at key moments throughout the day. And while he takes a varied approach toward exercise and training, rest assured he’s still completely disciplined and consistent in his overall workout routine.

Should you take a page from McGregor’s book, you’ll likewise get results. The process will be intense, but you knew that as soon as you saw the name Conor McGregor. Whether you’re hoping to build muscle, eat more protein, bring out your inner UFC champion, or experience weight loss, let the following diet and workout plan be your guide. 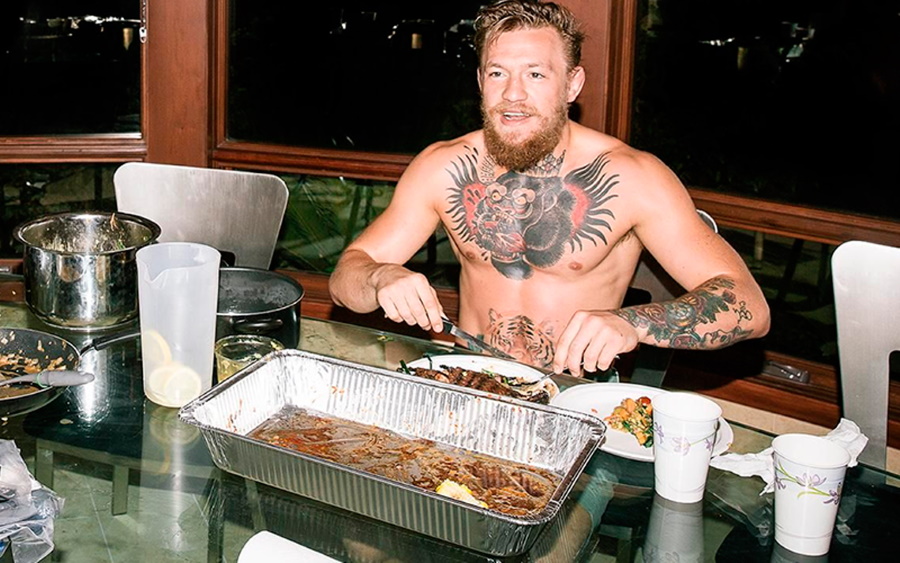 Conor McGregor diet coach Georges Lockhart knows that no two UFC fighters train or fight the same way, which is why he takes an individual approach to any given client. To quote Lockhart directly: “What works for one person may not be optimal for another.”

Nevertheless, Lockhart does abide by some core principles. One is consistency, which we mentioned above. Another is that certain types of foods should be consumed in direct correlation to when the fighter is either training or competing. When there’s a fight that night, for example, Lockhart takes the following approach:

Lockhart also stresses the importance of variety, claiming that diets like keto or Atkin’s deprive the eater of key nutrients. McGregor follows suit, even if he’s been previously associated with the Sirt food diet, which consists of foods such as green tea, dark chocolate, and citrus fruit. Also, while there’s some natural overlap with the paleo diet, Conor McGregor doesn’t tout this as a plan by which he exclusively abides.

Ultimately, the Conor McGregor diet plan goes big on protein and sticks to very specific types of carbs, namely fruit, green veggies, sweet potatoes, and butternut squash. He avoids takeaway food like the plague but does confess to having a sweet tooth. At the end of the day, however, he’s all about a “clean” diet, which in his words means “good-quality meats, good-quality greens, good-quality carbohydrates like sweet potato and butternut squash, and that is it.”

Culling from Instagram posts and interviews, here’s a typical day of eating in the life of Conor “Notorious” McGregor:

Being that Conor McGregor is all too happy to share…well…everything about himself, we thought it might be nice to do the same with you. Here are some specific meals and snacks that McGregor has eaten in the past: 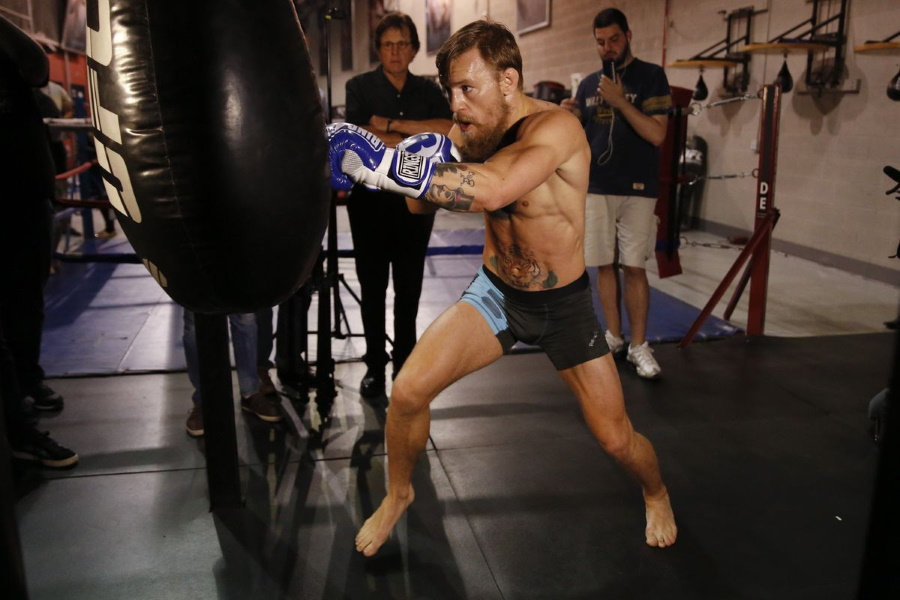 As you can see from the list above, Conor McGregor knows how to consume calories. He also knows how to burn them. This is the Conor McGregor diet and exercise plan, after all. Of course, you don’t need us to tell you that the UFC champion gets busy in the gym.

Before we dive into specifics, allow us to share some insight that came straight from the man himself. According to McGregor, one should always remember the following principles before adopting a workout routine:

As you can deduce, the Conor McGregor fitness regimen is as varied as it is intense. It covers a lot of ground so we’ll stop mincing words and cut right to the chase. Here is one of Conor McGregor’s workout routines:

Perform each of the following exercises for one minute.

Hold each of the following stretches for 30 seconds.

Perform each exercise for one minute and try to increase the number of reps as you go. Complete five sets total.

Above all other things, Conor McGregor is best known as a legendary fighter, and one might wonder how he prepares for his next bout. However, his training regimen is in a constant state of flux, evolving and responding to a host of external factors. It’s then hard to pin down an exact ritual since each one might differ than the one before it.

What we can say is that McGregor is an advocate of the Fighter Anaerobic System of Training (F.A.S.T), which includes both high-intensity aerobic training and perpetual endurance exercises. According to a recent interview, McGregor revises the timings of each endurance phase to coincide with the type of fight he’s training for.

It’s also known that McGregor does the majority of his training at the UFC Performance Institute, where everything is predictably top of the line. Leading up to a fight, McGregor will take advantage of the facility’s cryosaunas, underwater treadmills, and altitude chambers. Should you have access to these same resources, dive right in!