In Charles Darwin’s book On the Origin of Species, he declared: “The forms which stand in closest competition with those undergoing modification and improvement will naturally suffer most.” Now, while this book was written in 1859, reflecting evolutionary biology, I couldn’t think of a more apt analogy for the sports car industry.

Since 1967, the Porsche 911 has been top of the food chain. Many companies have tried to hunt the German icon, and just as many became extinct. In many ways, the 911 is somewhat of an anomaly. Rather than bringing new platforms to the table every few years, Porsche decided to evolve a formula that many said wouldn’t work, and turned it into the most recognised silhouette in motoring history.

You’ll also like:
Your First Porsche? Hands-on with the 2019 Macan S
The McLaren 720S – You Can Hurry Love
A Week with the Audi RS4 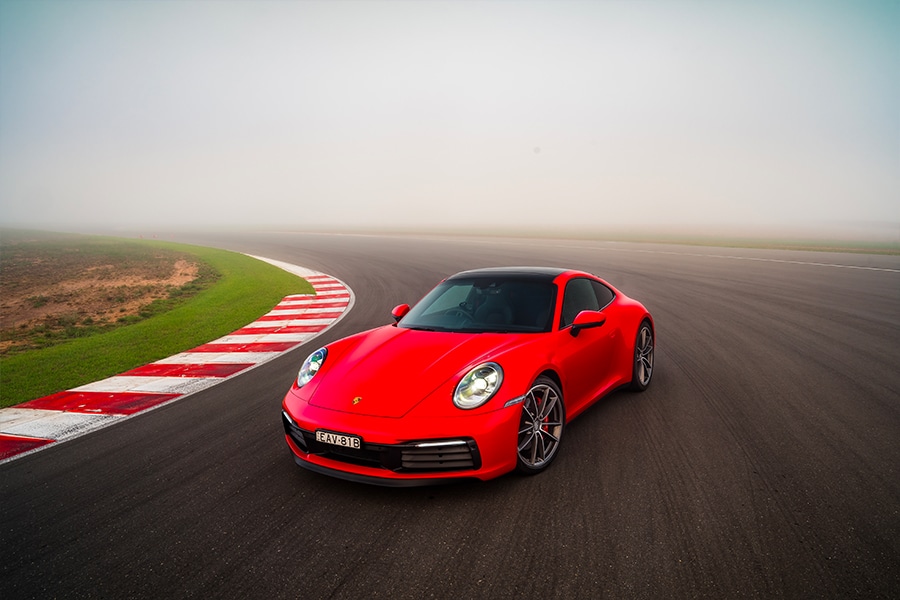 For over 50 years, that combination of classic styling, rear-engine layout, devastating performance and reliability has been untouchable. From the elegance of the original 911, the legendary turbo of the G-series, the howl of the 964, the air-cooled genius of the 993, the engineering of the 996, the power of the 997, and finally, the chassis of the 991, chances are, someone you know has been heavily affected by a 911. 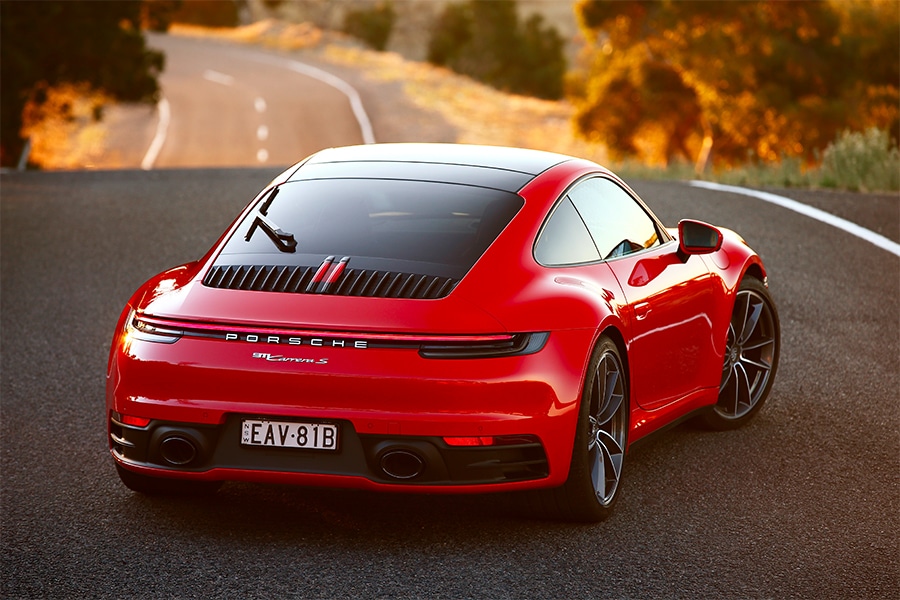 But what of the 992? The eighth chapter in the 911’s evolutionary dynasty? I first saw pictures of the new 911 hatching at the LA motor show, and I’ve been a little bit excited ever since. From the pictures at least, the new car seemed to perfectly fuse the simplicity and elegance of the earlier models with the pump and bravado of the later shapes.

It wasn’t long after the unveiling that word came through of the 992 lapping the Nordschleife of the Nürburgring in seven minutes and 25 seconds, a full five seconds faster than the 991.

How could Porsche move the goalposts yet again? Was the 992 still a quintessential rear-engine sports car? Is it still one the most dynamic chassis available? Well, Porsche invited me down to South Australia to analyse its DNA, and below are my findings.

An uncontrollable smile, some excitable jitters… If first impressions were anything to go by, the new 911 had me at hellishly good looking. Parked in the Valet at Adelaide airport, there was no denying its sheer beauty. In fact, the entire rear end of the car is something to behold.

The rear light strip and tail lights dance to the beat of a very tasteful drum and have to be seen in real life to fully appreciate their depth and intricacy. The hips are noticeably wider, and whereas you previously to had to fork out extra cash for broader curves, the new 911 now shares the same muscular body between the Carrera S and 4S models. Every panel on the all-aluminium body gives a subtle nod to its history and a tip of its hat to its future. The bonnet now features a recess towards the windscreen, reminiscent of the car that started it all. The front end is also 45mm wider, bringing the proportions more in line with 911s of the ’70s and ’80s. And where some features have been pumped and widened others have been honed and streamlined.

The door handles now sit flush and create one beautiful seamless surface from axle to axle. Side mirrors have been redesigned to optimize wind noise and aerodynamics, but just ‘happen’ to look handsome in the process. The entire package is perhaps too butch to be pretty, and too elegant to be tough. The type 992 is some kind of an aesthetical oxymoron, mixing opposing themes to create one of the most desirable packages I’ve seen in the last decade. 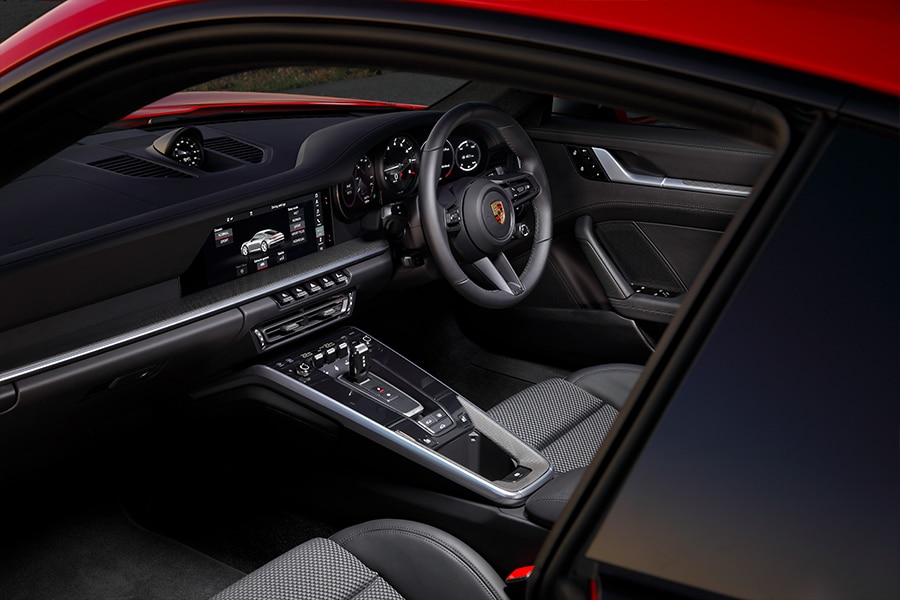 Once you flip open those delicate door handles and slip inside the cabin, you’ll feel some further nostalgia wash over you. The large analogue tachometer sits front and centre and leaves no question about what the focus is. Digital instruments hug the tacho nicely offering customisable display options whilst contrasting tastefully. Even the dashboard shares a similar profile to the original 911 spanning the pillars between two horizontal levels. 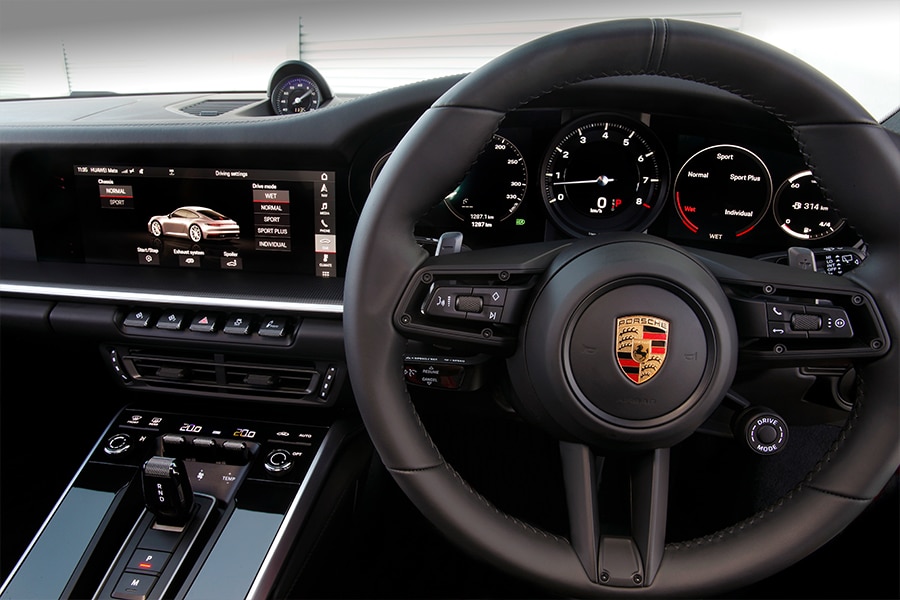 Unlike the original 911, however, the new car features one of the best displays on the market. The 10.9-inch beauty is the same unit as the one I just tested in the new Macan and whilst I’m always wary of too much ‘digital’ creeping into a Porsche’s interior, the touch screen never looks out of place.

As par for the course with Porsche, the seats, steering wheel and trim are flawless. 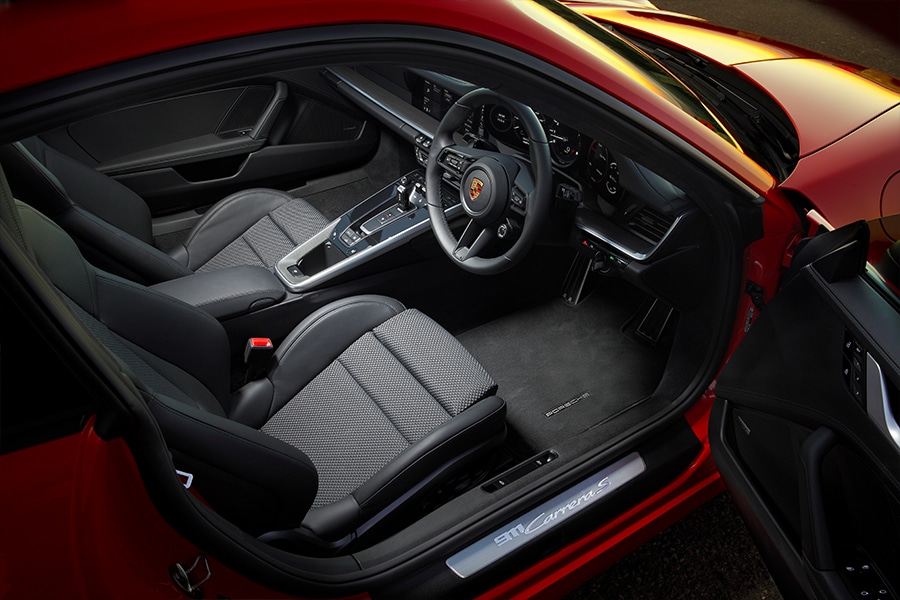 The seats are actually three kilograms lighter than the previous model, but while that claim will be hard to notice, the support and comfort was much easier to actualise. Even the often-overlooked rear seats in the 2+2 configuration seemed slightly more comfortable. You could get a bit nit-picky with subjective details, but overall, this is interior compliments the new shell charmingly well.

But is all this material attraction just a clever distraction? Or is the new 911 still the archetypal driver’s car? With a navigational route that looked straight from the pages of Mr Squiggle, I was about to find out.

The first thing that grabs your attention is the driving position. Still one of the most overlooked characteristics of modern sports cars, the 911 has always made it a priority. The seat is nice and low (5mm lower than the 991) giving you a gravitational connection with everything the chassis is doing. Steering wheel placement is spot on for both ergonomics and visibility and the pedal box is perfectly aligned, meaning you won’t get out of a long day in the saddle needing a trip to the physio. 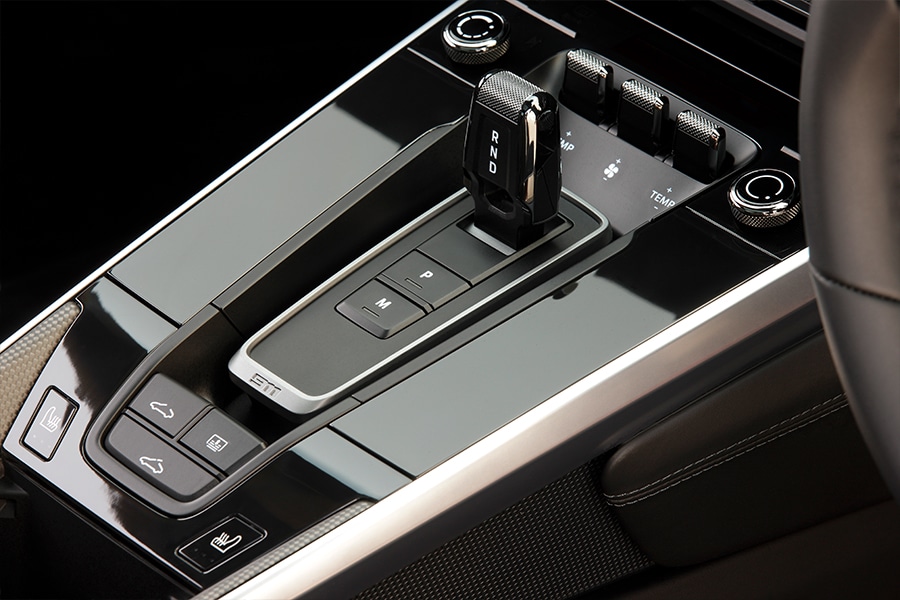 Once I was out of Adelaide and heading for Mclaren Vale, I started to feel ‘the 911 effect’. Even with 20-inch wheels up front and 21s at the rear, the ride was exemplary. The roads were the closest thing to what an American might call ‘canyon driving’, and the new chassis was loving every minute of it. Steering feel is excellent for an electric rack, and the traction of the 4S made sure steering inputs were always backed up with traction.

The type 992 still behaves like there’s an engine over that rear axle, but being the stiffest chassis yet, there’s an increased sense of predictability that transfers to confidence and playfulness on the road. After a few hours of driving, I arrived at a river crossing near Tailem Bend. And while I have never doubted the versatility of the 911 package, I thought amphibious traits might not align with its evolutionary biology. Lucky for me, the South Australian government provide a cable-guided Ferry across the Murray River which runs quite frequently.

So, I put aside any thoughts of the recently sunken Porsche’s out of mind and let the locals pick my brain over my precious cargo. And after a short drive up the road, I arrived at my destination, Australia’s ‘Nürburgring’: The Bend. 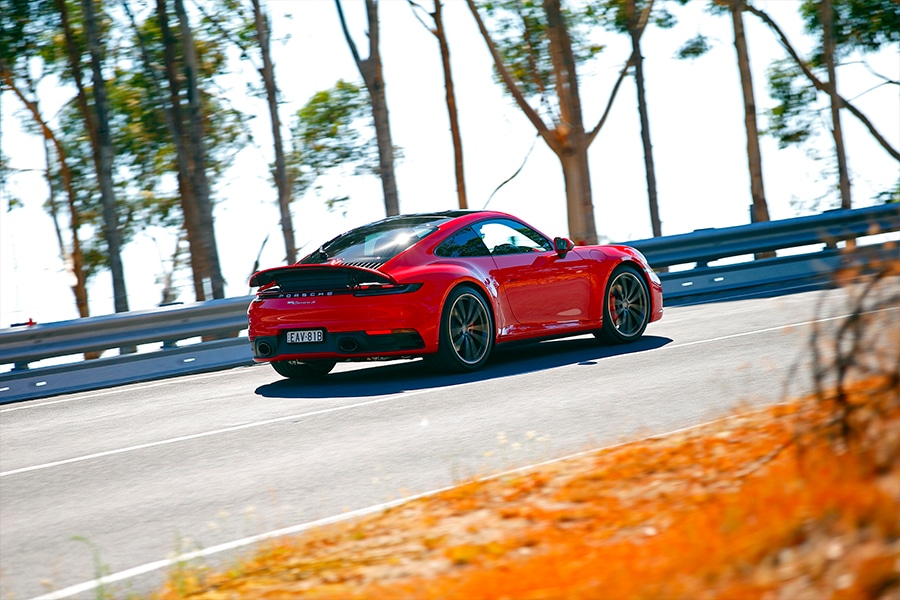 Following one of the best dinners I’ve ever had (courtesy of the crew from Orana), and my first night sleeping on a pit lane I was woken by some of Australia’s finest motoring talent. Luke Youlden, Dean Canto and Garnet Patterson have enough motoring silverware between them to purchase a 911, but on this occasion, they were more than happy just to hone my driving skills.

Now usually, on any track day, manufacturers will let me perform a few solo laps, then relegate me to the passenger seat and let a race driver show what the car is capable of. Such was their confidence in the car (and hopefully also myself), Porsche decided to switch things up and allow Luke to set a hot lap before letting me channel my inner Carrera Cup champion. 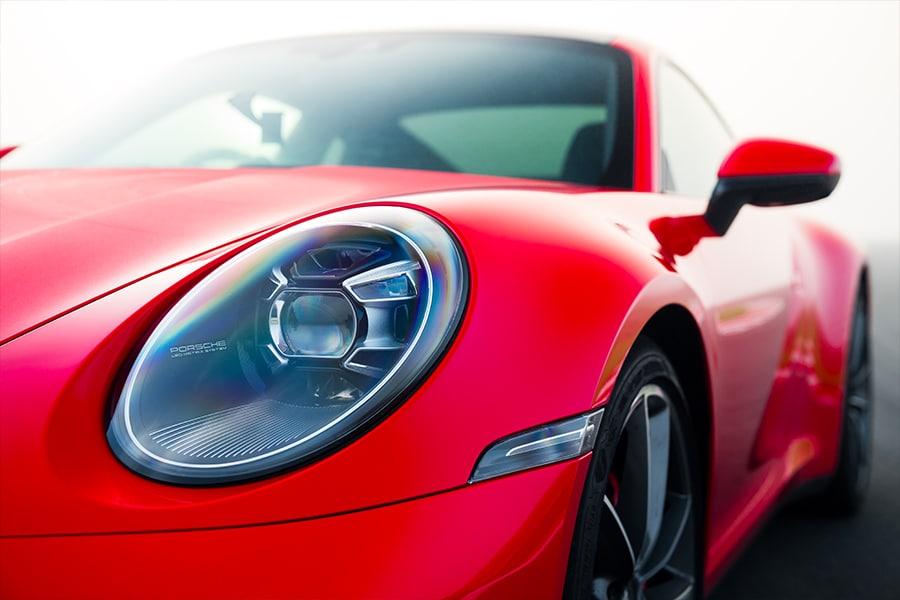 “It’s got some poke, doesn’t it?”, Luke asked as he launched out of pit lane. Not only was he correct, but it sounded incredible as well. The new 331 kW flat-six howled with a note reminiscent of the old normally aspirated engine but kicked 22 kW harder than the 991. It felt quicker across the entire rev range, and even when the tacho needle dipped low, there was never a trace of turbo lag.

Luke dished out plenty of firm driving instructions that were only surpassed by the firmness of my neck muscles, and with one big, elegant power slide on to the main straight, it was time to return to pit lane and find my game face. 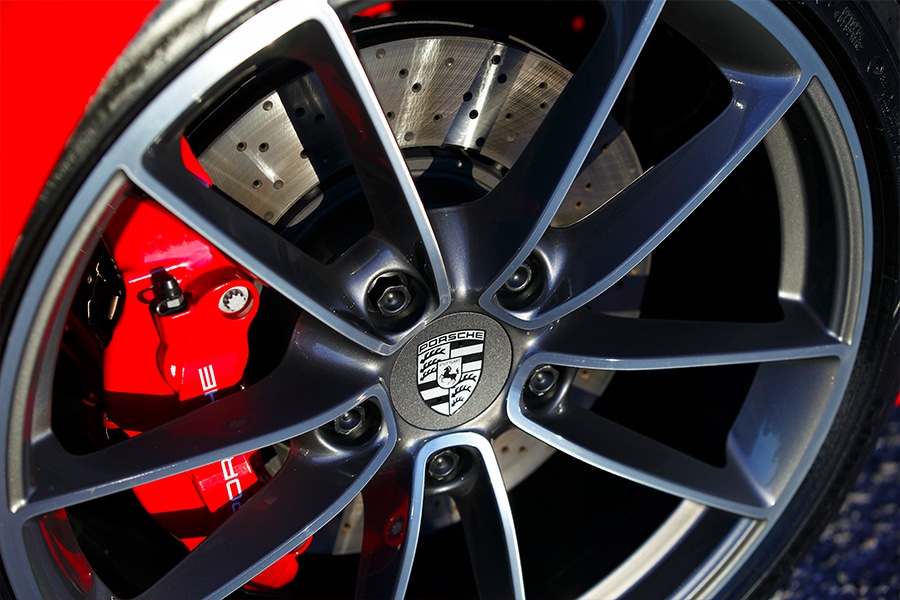 I’m not sure if it was 75kg of dead weight removed (sorry mate) or the fact that Luke was pace setting in a 991 GT3, but the Carrera S entered another zone. Every gear in that PDK snapped with a sense of urgency. Every calliper was squeezing a disc like it wasn’t going to see it again; the 911 had reached some kind of metamorphosis. Overcook a corner? Just neutralize that rear end with some throttle and steering control. Under-do a sweeper? Use that colossal torque to power your way through it.

Any of my doubts surrounding the dynamism of the 992 chassis were answered by a chorus of German machinery singing harmoniously (and the lingering smile that I took with me back to Sydney). 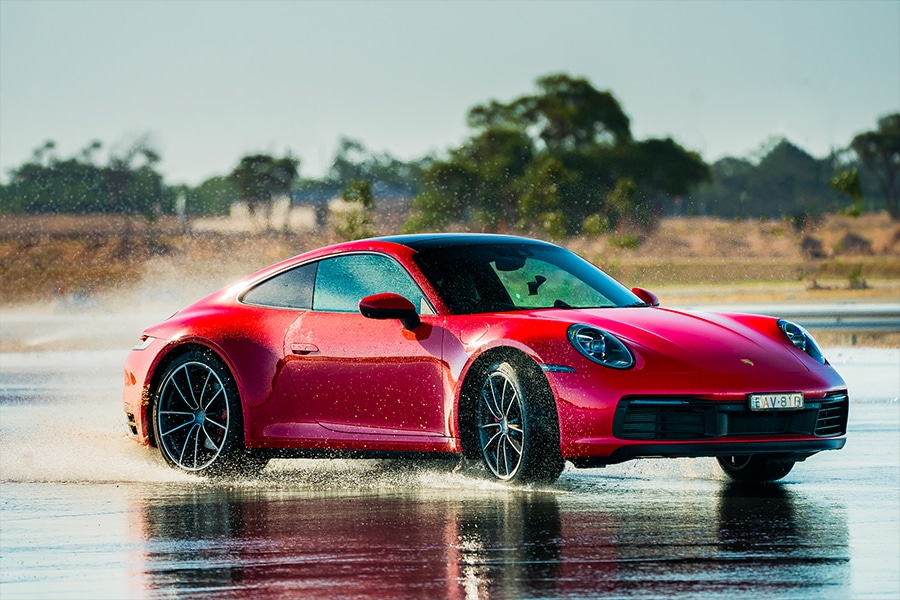 Whereas some manufacturers release new models and maintain the model name as a branding exercise, seldom do you see any of the internal or external DNA carried over. The Porsche 911, on the other hand, you not only see, but you feel the evolutionary proof. It doesn’t matter which version you see, you know it’s a 911. It doesn’t matter which version you drive, you know it’s a 911. It’s ironic that people often claim that German cars have no character or personality, because driving a Porsche 911 is pure theatre.

Would I wait for the manual? Yes, but that’s coming from someone who has an unhealthy obsession with manual gearboxes. The PDK is untouchable for performance and practicality, and if your 911 will be used in traffic, it’s the sensible choice. Would I buy the 4S over S? Probably not, because I think the rear engine/rear drive combination pays a little more respect to the lineage.

These are both purely emotional decisions, but it’s the sort of car that evokes them.

In previous chapters of the 911 story, you used to have to pay extra dollars for wider bodies, or join waiting lists for seven minute, 25 second Nürburgring times. The difference now, however, is the Carrera packs GT-like performance wrapped in a gorgeous, understated package. No wing? No worries. You’ll still own one of the best sports cars ever created.

If you’ve ever considered buying a 911, I strongly suggest you do your own testing and analyse the species. It should truly be a natural selection.

You’ll also like:
Your First Porsche? Hands-on with the 2019 Macan S
The McLaren 720S – You Can Hurry Love
A Week with the Audi RS4