Ever been with a woman who’s capable of having multiple orgasms and wondered why your sexual anatomy wasn’t blessed with the same capabilities? Well, live in utter jealousy of women no more because men have discovered a way of biohacking their orgasms to produce not one but ~multiple~ orgasms. That’s right, gone are the days when your girl gets off one, two, three (or more) times before it’s your turn to indulge in that one (and only) big moment of climax. Instead, you and your lady friend could exchange orgasms like you’re playing a heated game of volleyball. How’s that for a bit of fun?

To understand how it’s done, you’d probably need to wrap your head around what happens during an orgasm. Care for a bit of basic sex-ed? Well firstly, orgasms are different from ejaculations – orgasms involve contractions of the PC muscles within the genital area which induce an intense state of pleasure, while ejaculations are the release of seminal fluid. The two are separate processes that happen almost simultaneously due to your bodies evolved drive to procreate. As you get closer to ejaculating, you increasingly start to experience all those ah-maz-ing feelings that encourage you to keep going until eventually you release and spread your seed.

This is when your body works against you by going into what’s termed ‘a refractory period’. Basically, you orgasm 3-7 seconds before you ejaculate and then neurotransmitters are released that put your body into a state whereby additional orgasms and ejaculations simply aren’t possible regardless of the sexual stimulation. For each man, this period varies – for some only minutes and for others, days.

To trick your body into having multiple orgasms, the key is to prevent ejaculation so that you avoid your buzzkill neighbour (aka the refractory period), who always freaks out and calls the cops, from being invited to your orgasm party.

At this point, you might be wondering how it’s humanly possible to orgasm without ejaculating. The good news for you is that over time men have been fine-tuning their multi-orgasmic techniques and developed a number of easy hacks to help get you there, although, keep in mind that these methods require commitment, practise and haven’t yet been backed with empirical evidence.

These methods include strengthening your PC muscles and mastering your ‘edging’ abilities.

Your PC, or pubococcygeus, muscles are the ones you use when you try to stop your pee midstream and they are the muscles that spasms when you have an orgasm – they are also the muscles that you use to stop ejaculation. So, your job is to strengthen that little guy through a series of exercises. These are called Kegel exercises and doing them can also assist with bladder control and improve sexual functioning generally. To get a more detailed description of the exercises you need to do, there are a plethora of apps available for download that can walk you through the steps – just type ‘Kegel’ into your app store. Once you’ve got the hang of what to do, it’s ideal to work on them for about 4 weeks to get to optimum strength.

The other technique mentioned earlier is edging, also known as surfing or peaking, and involves repeatedly bringing yourself close to orgasm and then backing off just before you climax. You can start by going up to a 6 and then back down to a 5 then up to a 7 and back down to a 6. When you can manage to get to a 9 without going all the way, try oscillating between 8 and 9 a few times – this is true edging. With strong PC muscles, this method is easier to master so it’s advised that you strengthen them first before moving onto edging.

Once you get these two methods down-pat, your likelihood of separating your ejaculations from your orgasms is reportedly more likely. By having complete control over your PC muscles and learning to gauge when you’re close to climaxing through edging, the idea is that when you are moments from an orgasm, you clench your PC muscles tightly to withhold the ejaculation while still allowing the orgasm to occur. Now, this might sound easy enough, but it all requires practise. Put in the work, stick to it for long enough and eventually you’ll give a whole new meaning to ‘master of your own domain’.

It’s important to note that while male multiple orgasms have been achieved, research is scarce so it’s unclear if all men are capable of such abilities. In 2016, scientists reviewed the literature and found only 15 relevant studies despite over 100,000 hits on google in relation to the subject. Their results revealed that practising to orgasm without ejaculation, using psychostimulant drugs, having new or multiple sexual partners, and using sex toys were all factors that increased its likelihood.

Unfortunately, given the lack of solid scientific evidence available, whether it works or not for you is probably something you’ll have to find out for yourself, by putting in the work. But hey, a few months of work for a potential lifetime of back-to-back orgasms – sounds like a pretty good trade-off.

Laura Miano is a Sex Therapist in Training whose passion is centred on breaking down barriers surrounding sexuality and encouraging people to explore their sexuality in new ways. She celebrates diversity and believes that each individual is entitled to their own sexual identity. To contact her or see more of her content, email [email protected] or follow @lauramianosexology.

Laura Miano is a sex therapist in training whose passion is centred on breaking down barriers surrounding sexuality and encouraging people to explore their sexuality in new ways. She celebrates diversity and believes that each individual is entitled to their own sexual identity. To contact her or see more of her content, email [email protected] or follow @lauramianosexology.

Read more about Laura About Man of Many
The latest 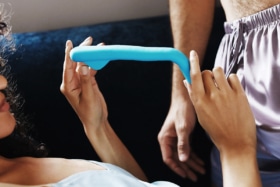