The footwear industry is one that has profited significantly from this massive online marketplace. The issue that arises from this is that most consumers don’t know the difference between clothing and footwear sizes. If you want to convert US shoe size to AUS, an understanding of the Australian shoe size conversion for men is crucial.

Sizes vary due to a vast amount of reasons. In the United Kingdom, Ireland, India and South Africa shoe sizes are based on the last (a foot mould used to make the shoes), which size is measured in barleycorn (1/3 inch). In the United States and Canada, the general sizing rule of thumb is one size more than the UK equivalent, so, for instance, a size 9 UK men’s shoe is equal to a size 10 US men’s. In European and Middle East Nations, your shoe size is determined by the number of Paris points (Form of Measurement) your foot size equals to, which is usually your foot length in centimetres multiplied by 2. Finally, In Japan, all shoe sizes are measured in centimetres exclusively.

Below we have provided a scale to determine what shoe size you are equal to. As a general rule of thumb most sneaker retailers in Australia use the US style of measurement. This of-course ranges from store to store, but it is now a widely accepted tool for measuring your foot size. 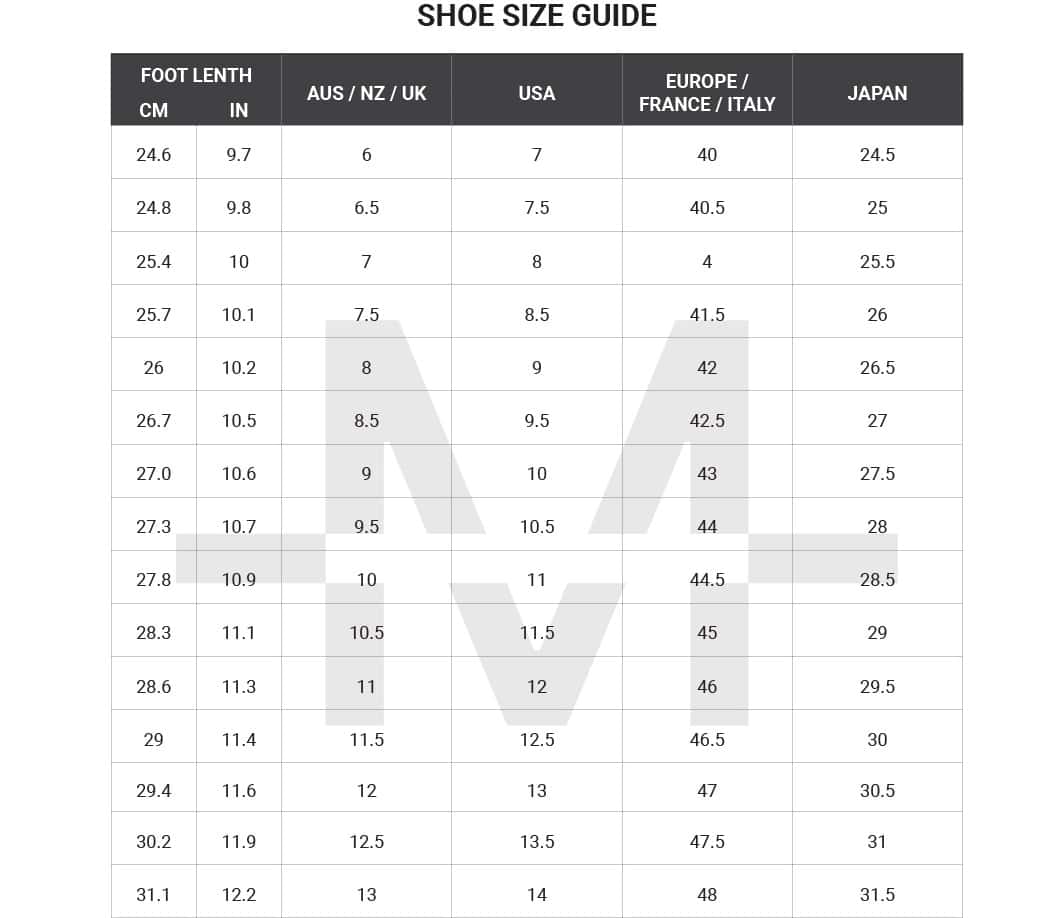 The reason that these size standards vary is due to the fact that many national standards for measurement were developed before the establishment of The International Organisation for Standardisation (yawn), It was formed after the second world war with hopes that nations would adopt the measuring system of mondopoints. However, as with most things the respective nations and manufacturers have been hesitant to make any significant changes to national standards. However, an increasing importance of international trade and e-commerce has prompted many manufacturers to change sizing standards. Many different companies have adopted either US or European standards of footwear measurement.

But where does the humble old Aussie sneaker sit in this equation? Well, due to the influence of the British in manufacturing industries Australian footwear fabricators adopted the English form of measurement. Which, dear reader, as you would have read earlier is equivalent to the size of last or foot mould used in production, measured in barleycorn. So, for instance, using the sizing of 10 US men’s as an example, would lead you to convert the size into 9 Australian men’s.

Not to be forgotten about is European Size Conversion, this is a bit more different. When it comes to this sizing form, many footwear companies have products ranging from EU 38 (AUS 5) to EU 48 (AUS 14). Within these constraints shoe sizes differ by only one number, so to use our earlier size example a size 9 Australia men’s shoe will be equal to size 43 European.

Is US and AUS shoe size the same?

Most Aussie shoe stores utilise a US-based style of measurement, meaning AUS and US shoe sizes tend to be the same. However, true AUS men's shoe sizes are technically based on the UK measurement system and thereby a digit below their US counterparts.

Is the UK shoe size the same as Aus?

Is New Zealand's shoe size the same as Aus?