While the best flagship smartphones in the world tick all the boxes for your daily grind with top tier cameras and even foldable designs, gaming phones lean into the features that you can’t see to offer a powerhouse experience built around words like Snapdragon, RAM, and Hz.

Don’t let the exterior design fool you either, these phones are well made, fully functional as a mobile phone, and offer real gaming credentials that would likely outpower the PC you’re reading this on. Of course, brands like Samsung and Apple are always going to reign supreme in daily duties, however, we thought it best to get our hands on the latest from perennial ‘best gaming phone brand’ contender, Red Magic, to see how it stacks up against flagships from your favourite brands.

Related: These are the Samsung Galaxy S22 Ultra Tips and Tricks You Need to Know. 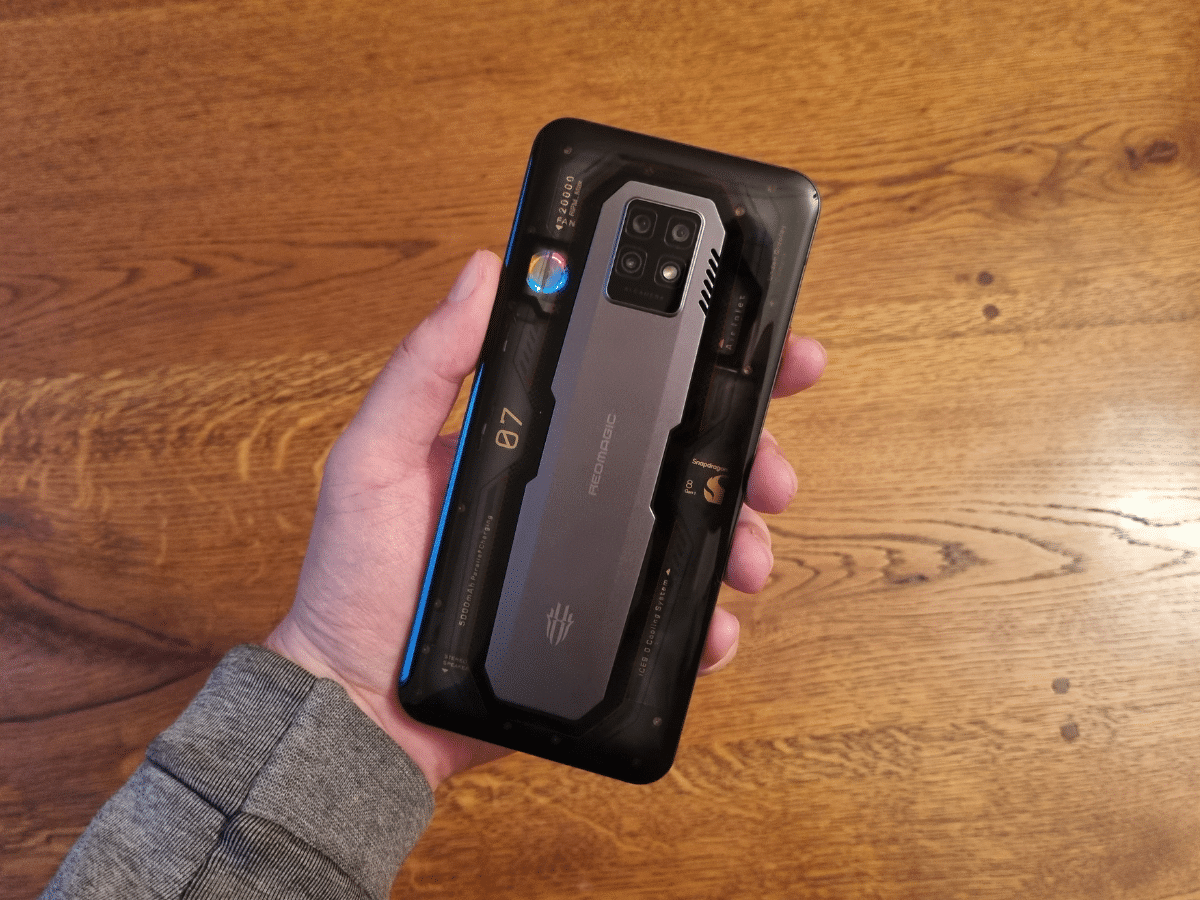 If you’re looking into a gaming phone there’s a good chance you’ll be looking for the specs first so we’ve added them all into the table below. The gist goes something like this; Red Magic 1 dedicated gaming chip, the latest Snapdragon 8 Gen 1, a powerful 960 Hz multi-finger touch sampling rate; nubia’s signature ICE 9.0 multi-dimensional cooling system with a built-in turbofan, and a large 5000 mAh dual-cell battery.

The global version of the REDMAGIC 7 PRO is available to purchase from April 27, 2022, with an early bird offer from April 22, 2022. We have our hands on it early though, so here’s what we think of this stat sheet stuffer.

What Distinguishes a Gaming Phone?

There’s no mistaking the Red Magic 7 Pro’s design for anything bar a gaming phone but don’t let that distract you from the fact this phone takes a sim card and is fully functional for everyday use. Here’s a list of the things a normal phone has and how the Red Magic 7 Pro stacks up.

Battery life is equal to many flagship smartphones on the market today being more than adequate for a full day of charge with an upgraded 5000mAh double-cell large battery incorporating Qualcomm’s Quick Charge 5 Technology. Charging is taken care of by a 65W quick air-cooled charging port with a 65W GaN charger – it’s really quick and displays a cool graphic when fast-charging. Obviously, battery life is going to be significantly reduced if gaming at FHD+ and 120hz, however, fast charging makes up for that.

We did notice a software issue in early testing with standby battery drain, however, that has seemingly been fixed in the latest update and see no issue in that for consumers. 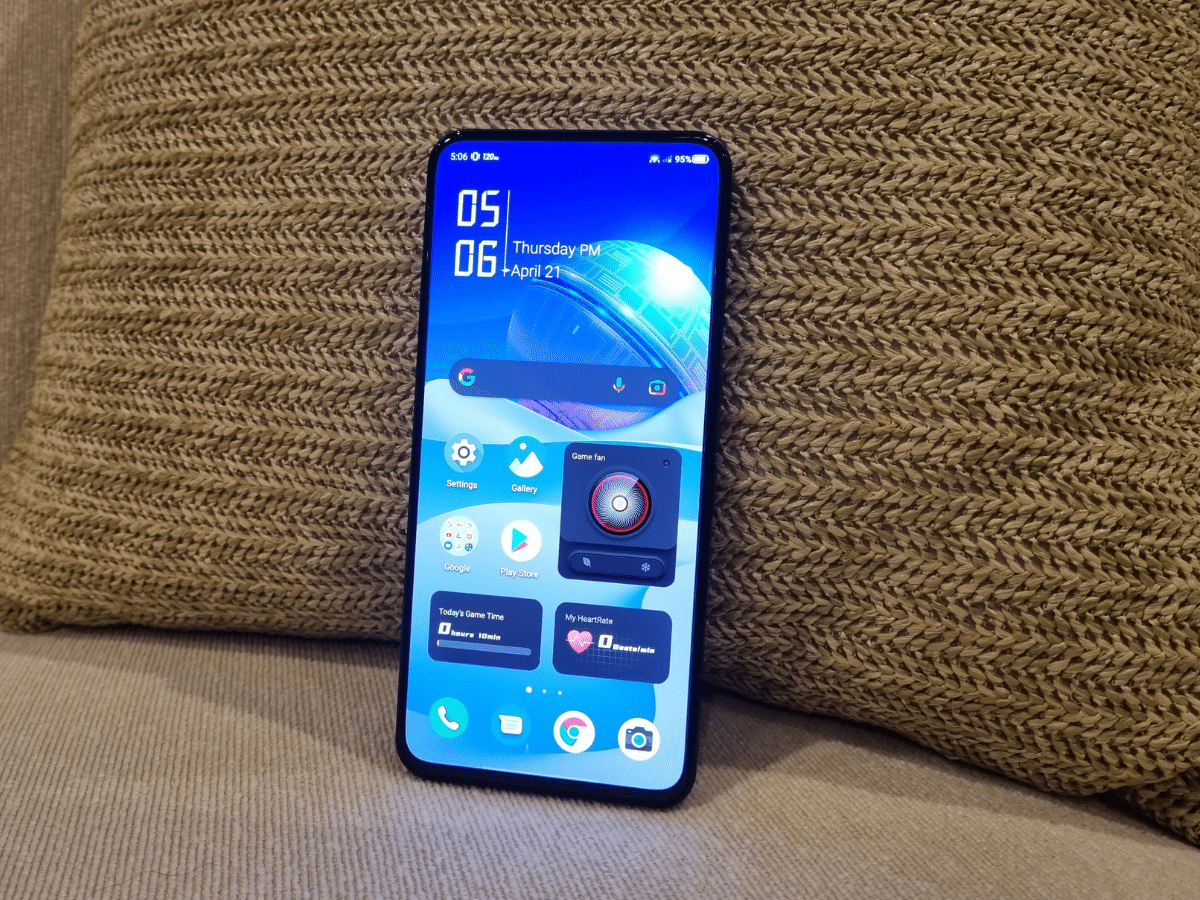 We’ve had our hands all over the Samsung S22 Ultra over the last few months and we’re pleased to say there’s no significant downgrade when it comes to screen quality in the Red Magic 7 Pro. Typically gaming phones and laptops lean towards speed and smoothness over the outright resolution and this does the same measuring in at 6.8 inches (17.27cm, 11.6cm) AMOLED display with a Full HD + 1080 x 2400 screen. The refresh rate is maxed out at 120 Hz and can be locked in at 120hz at all times, something that even flagship smartphones won’t allow.

The Red Magic 7 Pro’s display delivers a DCI-P3 100% wide colour gamut with a maximum brightness of 600 nits (quite a lot lower than industry standards). Also, its new image enhancement system, 2.0 Magic GPU, provides a 60% increase in frame rate stabilization. Simply put, it looks great in low light situations but leaves a lot to be desired in outdoor scenarios.

The form factor of the Red Magic 7 Pro is comfortable to hold in both portrait mode and landscape when gaming. Edges are squared off – like the new Samsung S22 lineup – so you get a solid grip on the phone at all times. 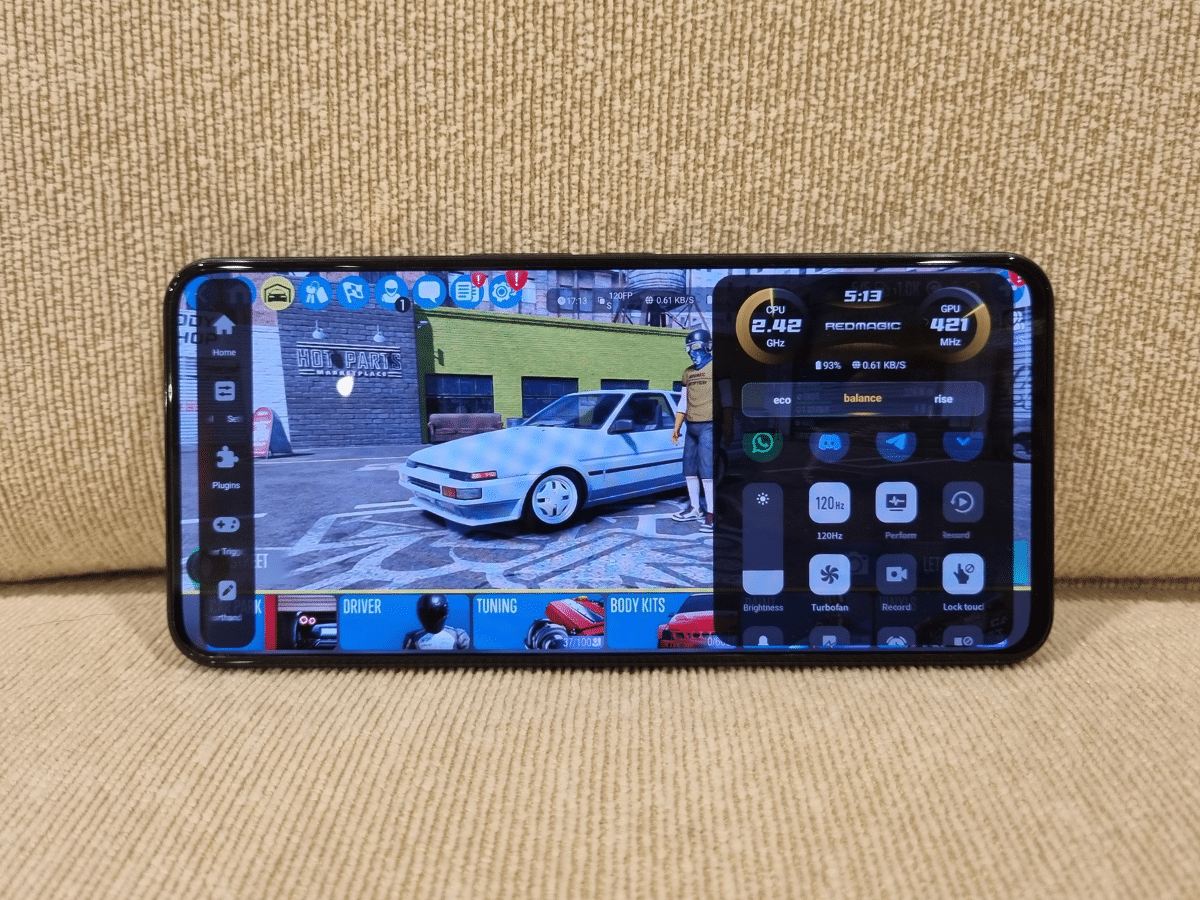 Our main gripe lands in the hands of the Red Magic operating system. While it utilises the latest Android 12 experience and brings with it features such as ‘Magic Write’ that enables ultra-fast reading and writing of applications for fast loading screens and app startup alongside Privacy Dashboard that delves into app permissions and user data access (including the ability to give an approximate location to some apps instead of your exact location) it’s just not as seamless and easy to use. A touch Beta.

One of our favourite features is ‘Game Space’ which allows you to view technical aspects by swiping the right side of the screen while gaming. Here you can see everything from CPU and GPU speed to real-time FPS. There’s even integration with messaging apps, including Discord.

Related: What is this Powerful New Apple Item Confusing the Internet? 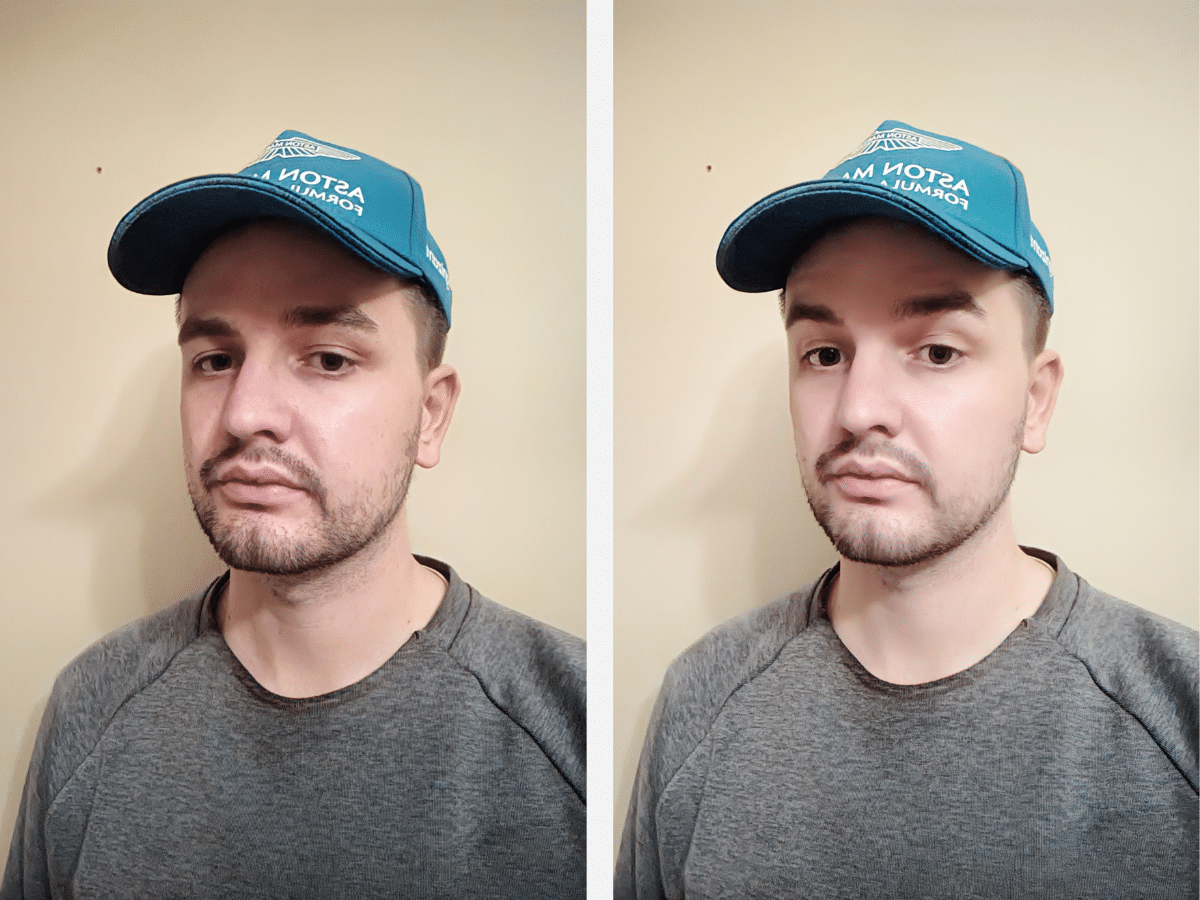 Left (No Beauty) vs. Right (Full Beauty Effect)… there’s not much helping this bloke.

Red Magic understands that gamers are looking for a full-screen experience without a pinhole camera or cutout to distract them from gaming. As such, the brand has integrated one of our favourite features seen in a smartphone this year – an invisible 16MP front selfie camera. How? They’ve combined five full-screen technologies, including;

Does it work? We’re happy to be a little biased here as the image quality presented by the UDC front camera is anything but great and in all honesty, we’d call them lacking in detail, fuzzy and soft all around, however, we’ll give the brand points just for trying as the technology is awesome.

Other cameras on the device are solid in quality (enough to get the job done) but they’re not flagship-level by 2022 standards. You’re looking at a triple camera setup with a 64MP+8MP main, Macro+2MP micro custom ultra-small 16MP front camera. For us, they’re about what you’d expect from a phone designed for gaming and it’s not a distinguishing factor when buying or using a gaming phone in our books. Good lighting = good photo and the provided night mode does what it says. 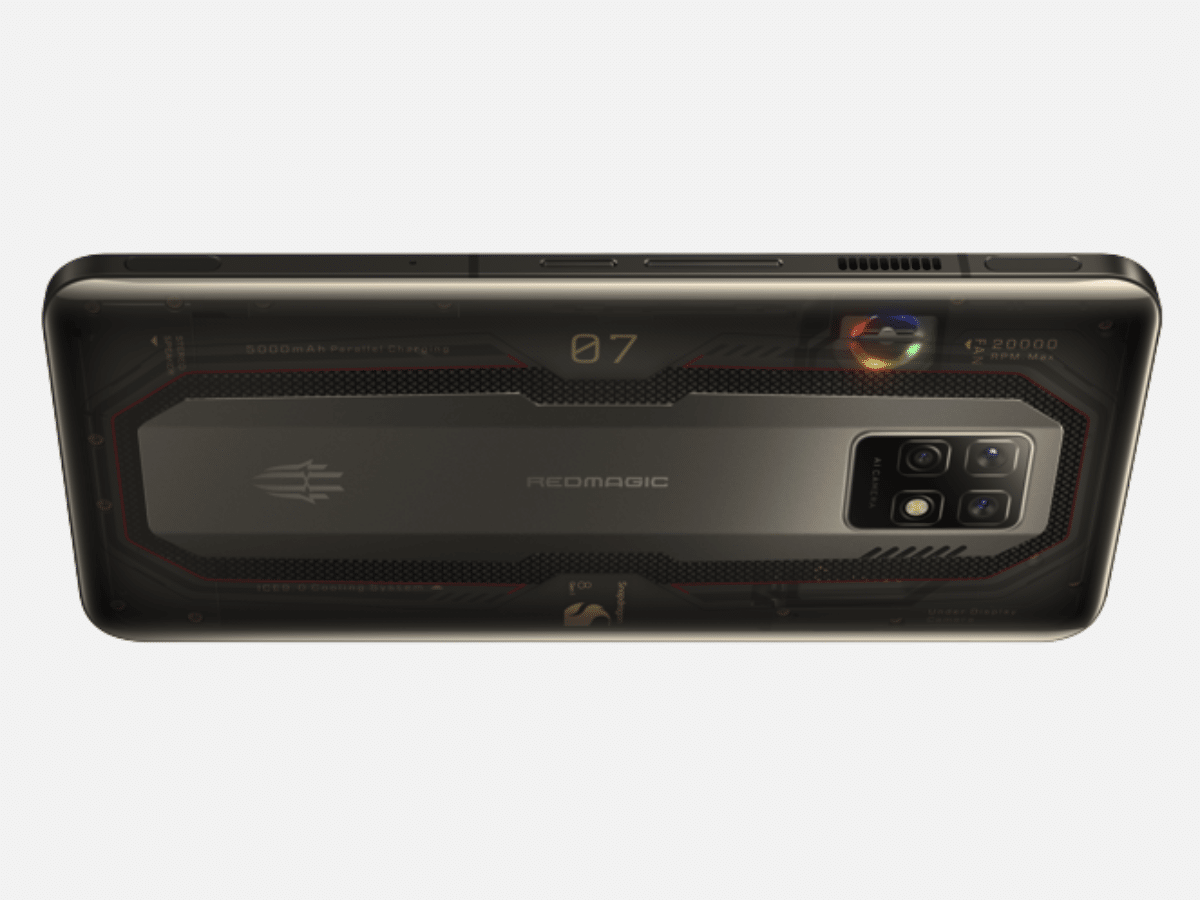 We’ve been itching to try a gaming phone with shoulder triggers as we’re big FPS fans and in competitive games such as Fortnite and League of Legends, these are all but a necessity.

The 500hz touch sampling rate triggers are anti-sweat, pressure-sensitive, and offer a response time of just 8ms. If you’re looking for a competitive edge when playing shooting games such as Fortnite you can’t look past a gaming phone with these as you can aim and shoot and the same time. They’re also effective in racing games such as CarX Drift Racer where the handbrake can be programmed onto either trigger for more accurate car control.

Just like a gaming PC, there’s a significant amount of cooling architecture that goes into the smartphone with everything from choice of material to fan speed being taken into the equation. Flagship chips have been known for overheating in the past and to deliver the sustained performance Red Magic 7 Pro features a 20,000 RPM turbofan (with RGB) designed with 0.1mm ultra-thin fan blades, an Iso-alloy frame structure, a metal cover, and four energy-efficient coils.

We found no real overheating issues while playing CarX Drift Racing 2 (120fps) or Fortnite during sustained use. In actual fact, you’ll struggle to find a game in the Google Play store strong enough to even push the limits of the phone’s cooling system. It also looks awesome when spinning around on the back of the phone while automatically turning on/off when launching a game.

You’re probably wondering how a smartphone can run these extra gaming features such as audio processing, RGB lighting, and haptic feedback without intervening in the performance of the Snapdragon 8 Gen 1 main chip. Your answer is the Red Core 1 chip designed by Nubia that supplements the Snapdragon 4nm processor and allows it to focus more resources on mobile games, applications, and other operations. 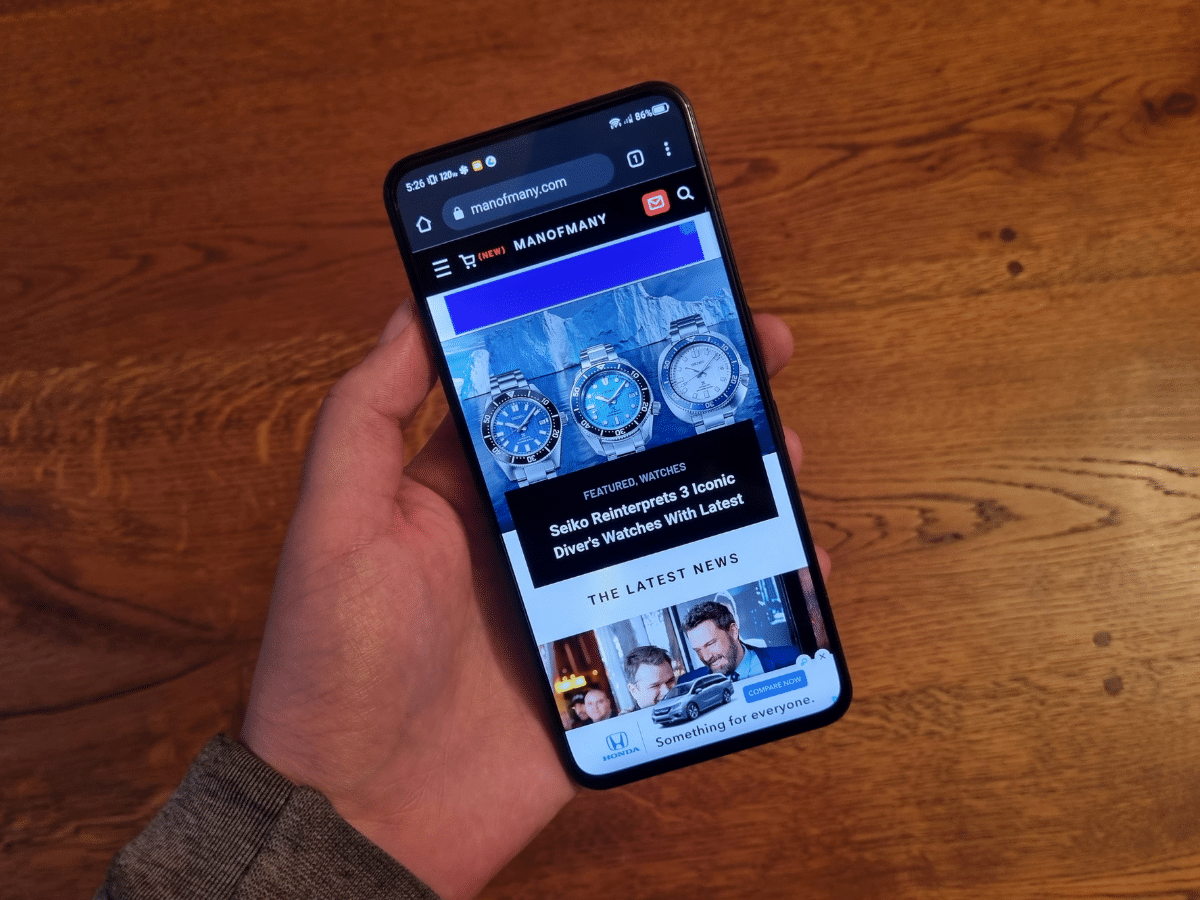 While we’d hardly call ourselves the biggest mobile phone gamer in the world we were pleasantly surprised by how well the Red Magic 7 Pro performed when combining as many gaming features as it does. The specs don’t lie and the thought of holding a phone that’ll never let you down when pushing the outer limits of what a handheld device can achieve in graphics, smoothness, and battery life is something we’ve come to appreciate.

Would we sacrifice the productivity functions and cameras in our flagship Samsung or Apple devices for a spot of gaming every so often? Probably not. Could you? Yes. Your only major sacrifice comes on the camera quality side of things, the brightness scale and the operating system mechanics where Nubia can simply do better.

If you spend any amount of time gaming during your week the Red Magic 7 Pro would be a phone to consider.

The Red Magic 7 PRO will be available in the following countries and regions:

Check out the link below for more information.

You’ll also like:
Roland Go:Mixer Pro-X Turns Your Smartphone into a Beat Lab
Schlage Encode Plus Unlocks Your Home with a Tap of Your Phone
Report Claims Apple Made $9 Billion Removing Accessories with New iPhones