From dusty desert shit-holes to free-range bogan breeding grounds, to the bin-chicken playgrounds of our megacities, Shit Towns of Australia is a guide to the concrete, fibro and methamphetamine wastelands that we like to call home.

First with their viral Facebook page ‘Shit Towns of Australia’, Rick Furphy and Geoff Rissole have gone on to release a book by the same name. It gives us a look at the shit-tonne of crappy towns we got here on this sacred sun-kissed country of ours, containing profiles on where not to visit, or God-forbid, reside. Furphy and Rissole’s bestselling debut Shit Towns of New Zealand won the Poolitzer Prize, the Poobody Award and the Nobel Prize for Shiterature. 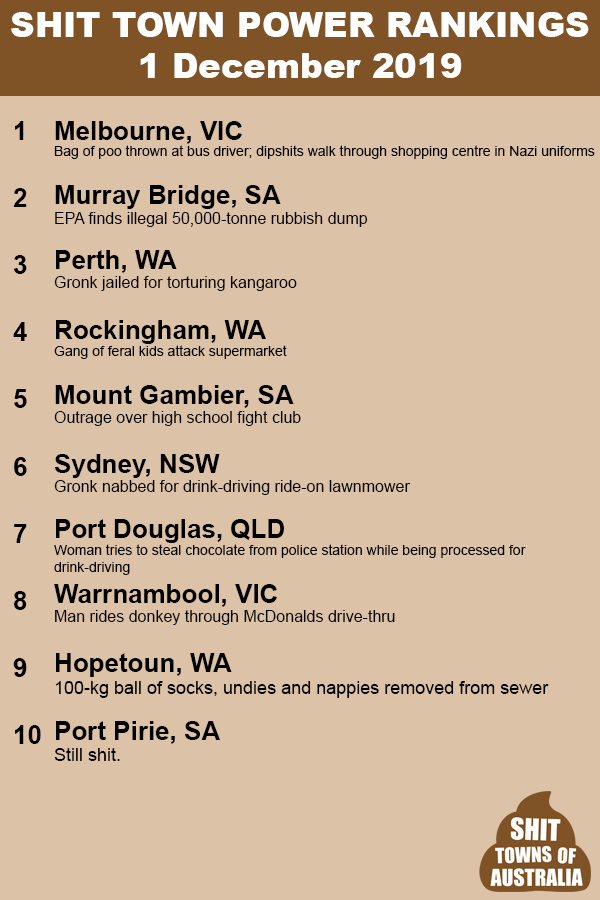 According to the author, the book reviews sixty towns and cities using a set of scientific criteria developed at the illustrious ‘University of Nimbin’, which combines extensive field research, a desire to offend, and where possible: a sense of humour. Byron Bay, Newcastle, Sydney, Wollongong, Canberra, Coffs Harbour and Central Coast are all included in the fold.

Along with a lot of laughs, the book has gathered many disgruntled shitty-town-residents, with one district mayor suggesting the authors be shot. “Don’t put shit on my home town. you need a ass whoopin”, wrote one reader from Mandurah. “dis iz h8 speak m8”, claimed another from Sydney.

It looks like a decent read and it wouldn’t be a bad little Christmas gift.