He might make it look easy, but behind Usain Bolt’s ridiculous speed and formidable strength is a rigorous diet and workout plan. Just to give you a quick refresher: Bolt is the fastest man in the world, with eight Olympic gold medals and a record-breaking 100m sprint to show for it. Making his accomplishments all the more impressive is the fact that he’s both taller and heavier than your standard sprinter. It’s then no surprise that Usain Bolt’s diet and training routine keep his mass lean and mean, enabling him to soar past the finish line like a cruise missile with legs.

Like so many others, you might have a range of questions about this living legend. What does Usain Bolt eat for breakfast, you wonder? Is there such a thing as a Usain Bolt meal plan? Does the Usain Bolt training routine focus primarily on leg workouts, or does he give equal attention to every part of his body? What does a Usain Bolt ab workout look like?

For the answers, look no further than our rundown of Usain Bolt’s diet and workout program. While it won’t give you his downright insane top speed of 27.79 mph, you’ll certainly be optimising just about every part of your body, inside and out. That’s, of course, presuming you stick with both the diet and the exercise. We thus present the Usain Bolt diet and workout plan. 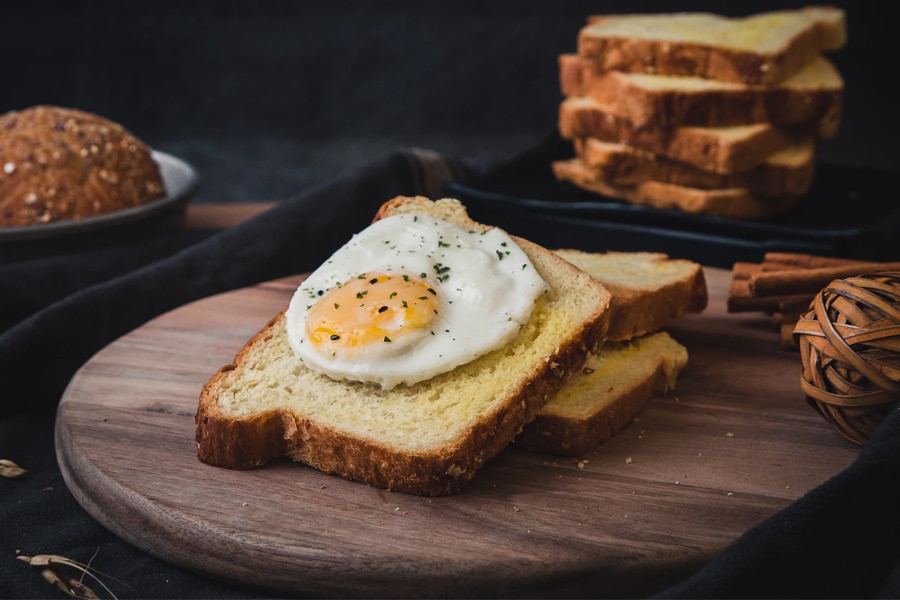 What is Usain Bolt’s Diet?

When it comes to Usain Bolt’s diet plan, we have some good news and some bad news. The good news is that Bolt eats a surprising amount of what might be called guilty pleasure food, such as breakfast sandwiches, corned beef, and (gasp!) pasta. According to legend, he even once consumed 1,000 chicken nuggets when participating in the Beijing Olympics. Whether true or not, that makes for one heck of a modern myth. The bad news is that if you want to eat as he does, you should be prepared to spend a lot of time at the gym or on the track.

Despite his occasional indulgences, Usain Bolt’s diet nevertheless consists primarily of vegetables like broccoli (which he hates). He’s also been quoted as saying that during the day, he consumes only as much as he needs to burn through and digest, and then loads up on additional calories before bedtime. Speaking of calories, it remains unclear how many of them Bolt consumes throughout the day. One report has him going as high as 5000, while another brings that number down to just 2,273.

Now, you might be saying to yourself, “Corned beef and chicken nuggets? Big dinners before going to sleep? That doesn’t sound like the diet of a champion!” To which we can only respond that he makes it work. Should you hit the gym on a regular basis, you can probably make it work, too. 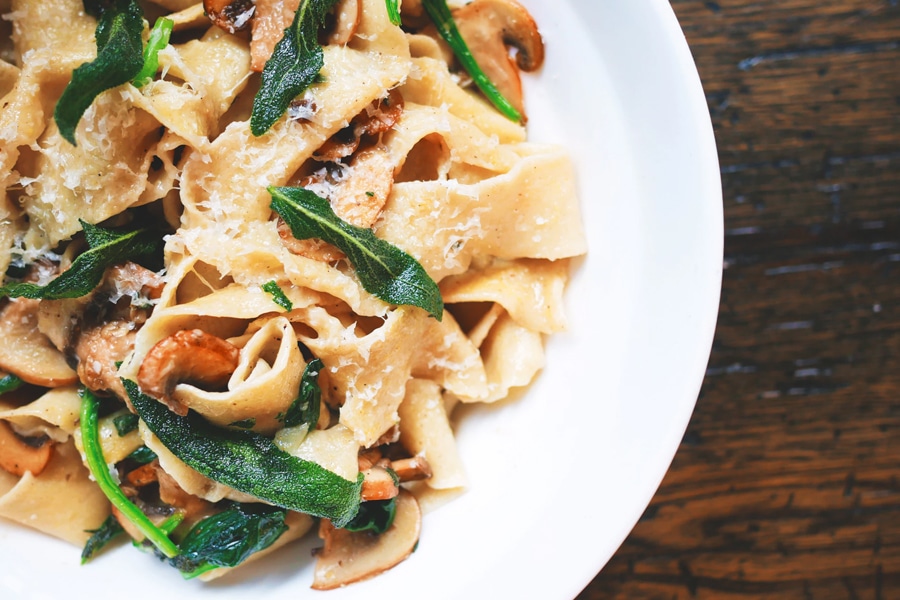 It’s been reported that Usain Bolt’s diet plan consists of 5 meals throughout the day, most of which are approved by his coach and prepared by his personal chef. That includes breakfast, lunch, dinner, and snacks. Here’s a breakdown:

Egg Sandwich – Usain Bolt is definitely a creature of habit. As such, he starts every day with the same thing: a simple egg sandwich.

Pasta – Carb lovers rejoice! Presuming you stick to a light lunch as Bolt does, you can sneak in the occasional pasta dish. Hooray! PS. If you’re trying to be healthy, make it wholemeal pasta.

Corned Beef – We don’t know too many diet experts who would recommend this delicious cured meat, but Bolt is apparently a big fan of eating it for lunch. Do you want to be the one to tell him to stop? We didn’t think so.

Fish – Like so many other athletes and fitness freaks, Bolt loads up on healthy omega-3 fatty acids by way of the occasional fish lunch.

Broccoli – Bolt has openly expressed his distaste for this fibrous vegetable, but his coach insists. If the famous sprinter can eat it, so can you.

Chicken – We have yet to meet a healthy carnivore who doesn’t swear by a lean cut of chicken, which delivers lots of protein and little fat. Bolt usually has his for dinner.

Jamaican Dumplings – In Jamaica, they stuff dumplings with a variety of ingredients, including ackee, saltfish, kidneys, liver, and salt mackerel. Does Bolt take his boiled, roasted, or fried? We’ll guess boiled, though we can totally see him sneaking off with a plate full of fried dumplings.

Fruit – Bolt gets his all-natural vitamin and nutrient (and sugar) infusion by snacking on fruits, including mangos, pineapples, and apples. 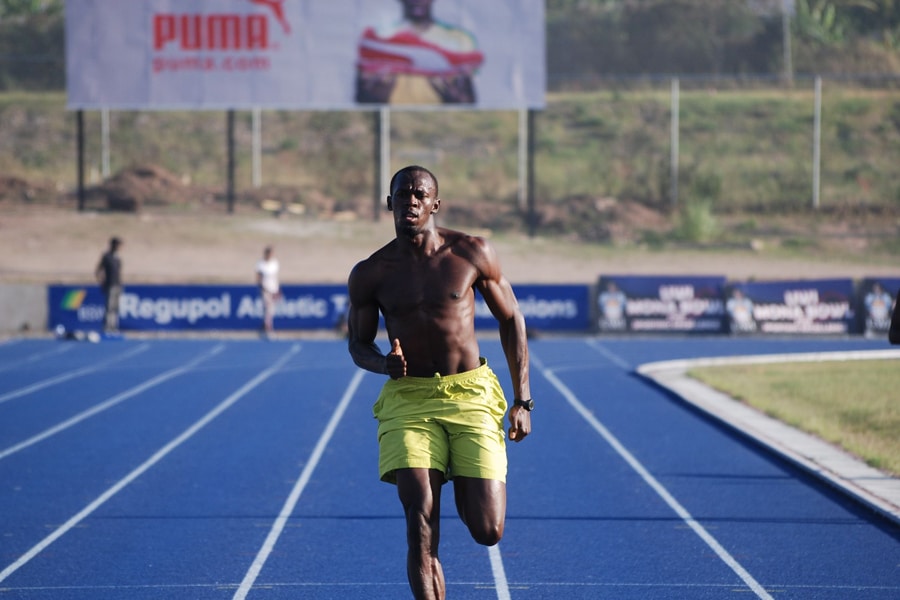 You don’t get to be the fastest man in history by diet alone. That’s why Usain Bolt’s training routine is as consistent as it is methodical, and executed on a daily basis. Given his above-average height and weight, Bolt focuses on generating propulsiveness by strengthening his fast-twitch muscle fibres. He also employs a range of conditioning exercises to ensure that his figure stays relatively lean.

Naturally, Bolt spends a lot of time working on his legs, but that doesn’t mean he leaves the rest of his body unattended. Indeed, throwing the medicine ball, weightlifting, swimming, push-ups, and ab workouts are all part of the program. That said, what’s known as the Electric Bolt Workout is primarily centered around boosting explosiveness on the track. He is a world-class sprinter, after all.

Phase A of the Electric Bolt Workout

This phase focuses on producing maximum power in minimal time.

Keeping your feet shoulder-width apart, squat down while bringing both arms back. Swing your arms as you jump forward as far as you can. Land and repeat, performing 5 sets of 20 reps.

Start in the squat position and put your hands on your hips. Now, jump onto a 60cm high box, jump back down into a squat, jump back onto the box, and so on. Perform 4 sets of 8 reps. When weight training, Bolt brings in the medicine ball.

Phase B of the Electric Bolt Workout

The second phase of the Electric Bolt Workout emphasises flexibility and targets the hip flexors, thereby boosting your stride.

Secure your angle to the low cable pulley by using the cuff attachment, and then stand at a distance to where the cable is taut. Next, thrust your knee upward toward your chest before carefully returning to the starting position. Perform 3 sets of 10 reps.

Hang from a pull-up bar using an overhand grip, then bend your knees and raise your hips until your thighs are close to your chest. Hold for a moment, lower carefully, and then do the exercise again. Perform 3 sets of 10 reps.

After the Electric Bolt Workout, Usain Bolt heads out to the track for some sprints. He divides his sprint training into the following drills:

What, you thought you were done? As we said, Bolt targets his entire body, including his core. Here are the ab exercises he implements into his program.

Lie on your back and keep your legs straight and together, then lift them all the way up toward the ceiling. Bring the legs back down, but don’t let them touch the floor. Hold for a second before repeating.

Bolt commonly incorporates an exercise ball by placing it between his legs. Whichever method you decide, aim for 3 sets of 30 reps, increasing your reps as you improve.

Help tighten those glutes by getting on all fours, raising your leg straight back in the air, and then sweeping it out to the side. Hold the leg (which should be more or less parallel to the ground) for a moment before returning to the starting position. Perform 3 sets of 30 reps, increasing your reps as you improve.

Crunches are so yesterday; opt for the reverse crunch instead. Start with your back on a mat and your knees bent. Tighten your core as you lift your feet off the floor until your knees are raised above your hips. Keeping your knees bent at a 90-degree angle and using your arms for balance, bring your knees toward your head, rolling up your spine. Hold briefly before gently returning to your original position. Perform 3 sets of 30 reps, increasing your reps as you improve.

To start this exercise, prop yourself on your forearm, keeping your elbow underneath your shoulder and your knees bent so that your feet and lower legs are behind you. Your top hand should be either on your hip or reaching toward the ceiling. Next, lift your bottom hip off the ground, pushing through with your knee and forearm. Keeping the knees bent, lift your top leg upward while applying some extra squeeze to your glute. Bring the leg and hip back down to the ground, and repeat. Perform 3 sets of 30 reps, increasing your reps as you improve.

As you can probably guess, the full Usain Bolt training program also consists of weight training exercises. Here’s a sample of how Bolt builds upon and then retains his cut physique.

What is Usain Bolt's Net Worth

Usain Bolt's net worth is $90 million.

What does Usain Bolt eat for lunch?

Usain Bolt's diet consists of 5 meals a day including breakfast, lunch, dinner and snacks. He often eats corned beef, fish, or a pasta dish for lunch.