The beauty of modern horology is that you don’t have to break the bank just to slap some incredible style around your wrist. Indeed, the best mid-range watch brands prove that great things can still come in (relatively) affordable packages. And while these killer timepieces might not be packing tourbillon and other luxury specs under the hood, they remain optimal, fashionable and beautiful inside and out. In fact, the best mid-tier watch brands are so brilliant and eye-catching that should you buy one, you could probably lie and say it cost twice as much. Perception is reality after all.

We’ve listed the 14 best mid-range watch brands in no particular order below. 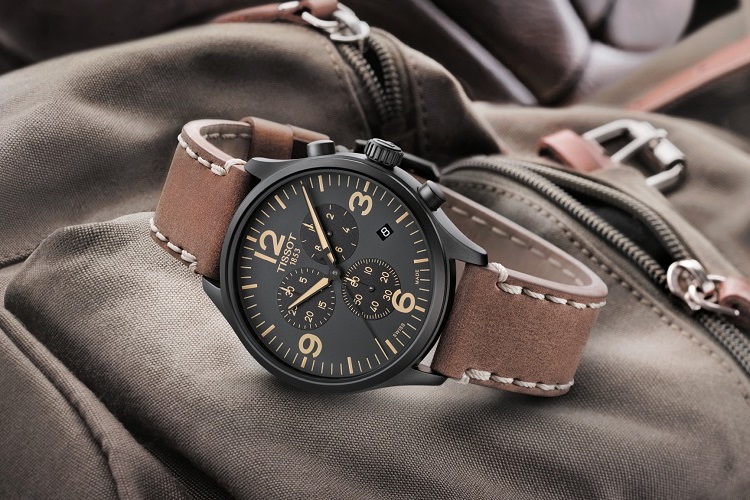 There a few watches similar to Tissot. Swiss watchmaker Tissot came out the gate swinging in 1853. That was when they introduced the first pocket watch with two time zones. Other claims to fame include debuting the first mass-produced pocket watch, the first anti-magnetic watch and the first watches made out of plastic, stone, mother of pearl and wood, respectively. The amazing mid-tier brand is also the official timekeeper for a bunch of professional sports leagues. Needless to say, all that history and expertise has amounted to tremendous success and watches that combine form and function with the utmost precision. The trusty PRS 516 Chronograph is a benchmark stunner. The T-Sport T-Tracx Chronograph pairs elegant vibes with sturdy performance to bring the best of all worlds. For active men seeking premium style and sportiness in equal measure, look no further. 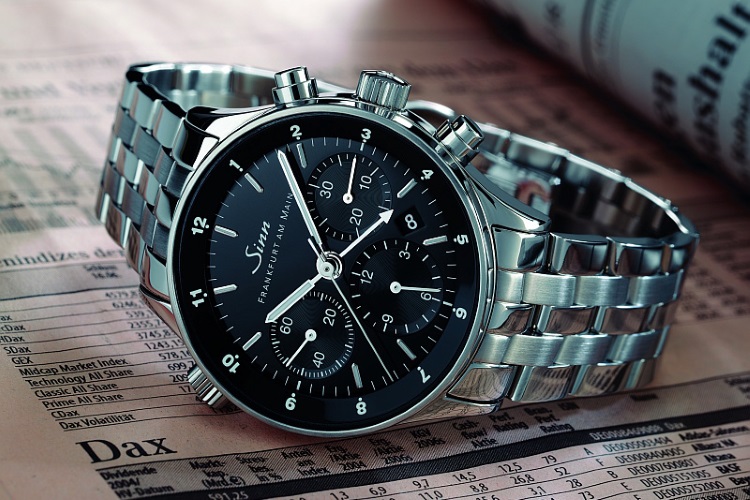 The name might sound overly indulgent at first, but Germany’s Sinn Watches are anything but (in fact the word “sinn” translates to “sense”). This top mid-range watch brand finds its calling in the world of diving and aviation. Accordingly, many of their diving watches are officially classified as diving equipment, while most of their pilot’s watches are likewise officially certified for professional use. That said, the brand still offers plenty of extraordinary fare for average enthusiasts at prices too good to refuse. Overall, Sinn-Spezialuhren timepieces offer maximum functionality and accuracy while making no sacrifices to aesthetics. 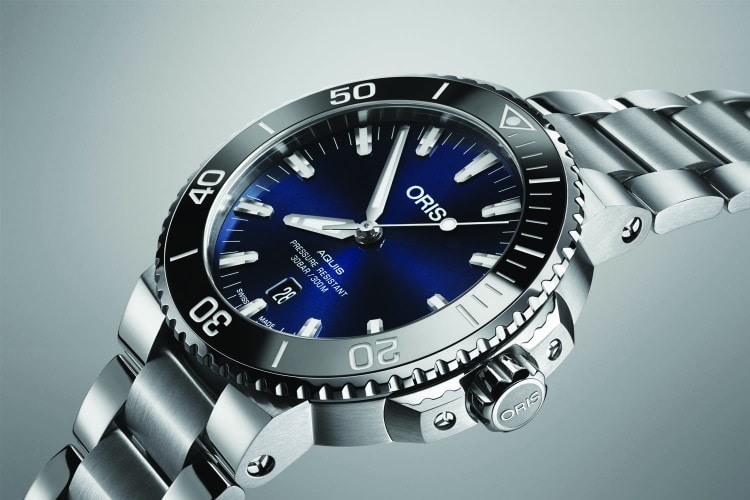 For over 100 years, legendary mid-tier brand Oris watches has coupled the best of engineering with downright brilliant designs to deliver masterpieces in the following arenas: Motor Sport (like the Oris Williams), Aviation (think Oris Big Crown Propilot), Culture (Oris Artelier & Oris Classic and Diving (as pictured above with the Oris Aquis and the Oris Divers and Oris Prodiver). To this day they produce only mechanical watches of exceptional quality. A premium red rotor remains their mark of distinction and perennial good luck charm. In this era of omnipresent tech, a solid mechanical watch emerges as a signifier of timeless performance and vintage styling. Oris has championed the mechanical watch without gouging on the price, earning glowing reviews. You do the math. 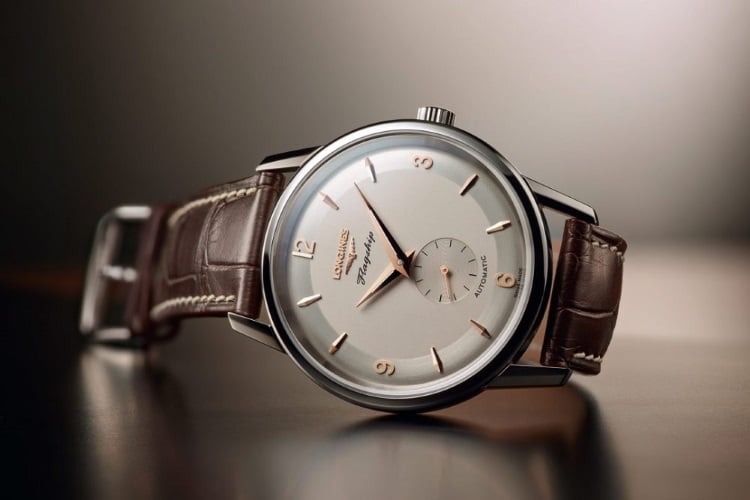 Distinguished and exceptional, Longines watches are backed by almost 200 years of craft. Their Legend Diver Automatic Men’s Watch–while not exactly mid-range–appeared in a Bond film and remains a highly sought after (and gorgeous) collectible. A new all-ceramic version broadens the Longines Hydroconquest collection, or you may prefer to enjoy the craftsmanship of the Longines Flagship Heritage Collection – pictured above. The brand was recently named partner and official timekeeper of the French Open and has been partnering with professional ski competitions since the 1930s. What all this amounts to is a truly seasoned mid-range watch brand that covers the full spectrum of aesthetics, mechanics, and traditions. 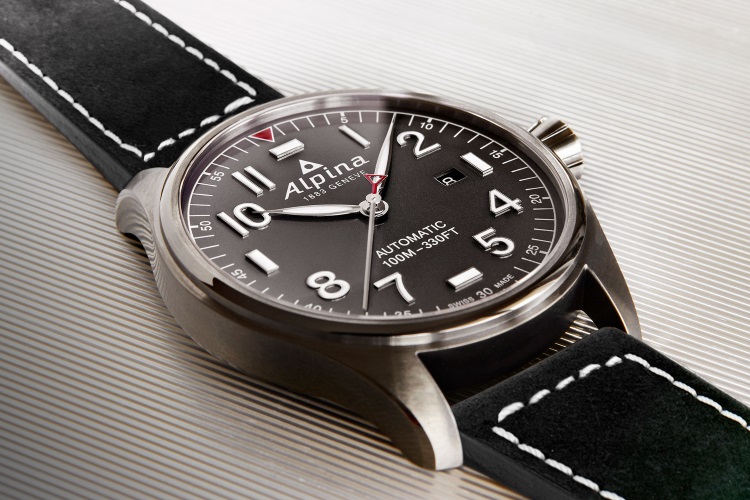 Alpina is a true workhorse of a brand that has stayed in the game through thick and thin. Since 1883, they’ve taken a conscious, innovative and quality-based approach toward production, sometimes to a fault. 1938’s Alpina 4–which joined anti-magnetic and anti-shock properties with water resistance and stainless-steel construction, is considered by many to be the father of the modern-day sports watch. Recent endeavours include the acclaimed and affordable Horological Smartwatch series as well as the painstakingly reliable AL-760 Automatic Flyback Chronograph, which utilises a patented flyback mechanism invented in-house. Alpina craft some of the finest mid-tier watches money can buy. 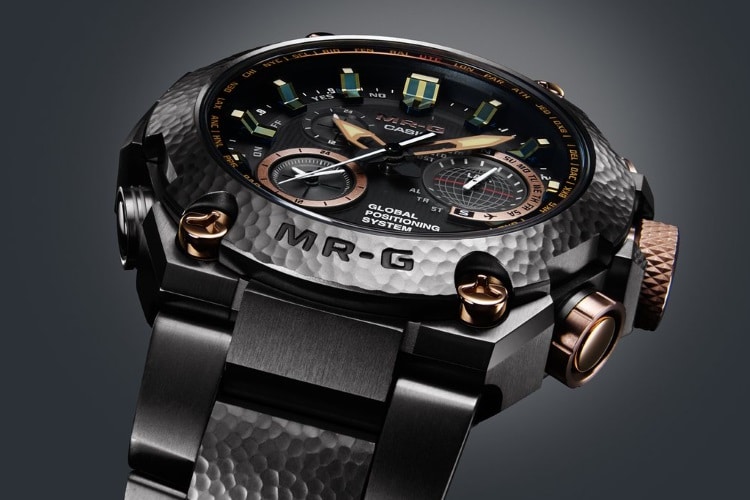 Japan’s Casio launched in the 1940s, but they wouldn’t emerge as an horological game-changer until a few decades later. That was when (along with other brands like Seiko) they popularised quartz movement and mastered the digital watch, essentially up-ending the industry in the process. Casio watches for men like the Master of G and G-Steel Series are not just priced to move and overloaded with features, but they’re more or less as resilient as a mid-range watch can get. The G-Steel series consists of a quality metal body with shock resistant structure that G-SHOCK is renowned for. Designs include stainless-steel and resin bands for fashion-forward designs. If tough, stylish, versatile, dependable and affordable is your thing, then Casio is your brand. 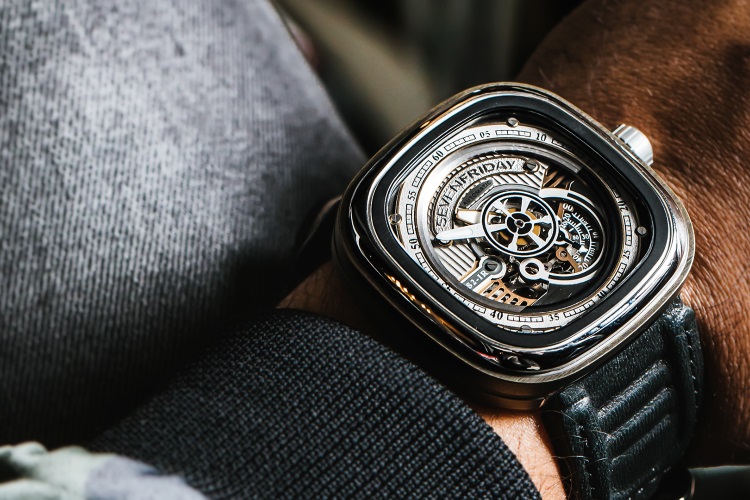 Just because you’re saving money, doesn’t mean you can’t still find boldly creative concepts. For that look no further than a SevenFriday watch, easily one of the best mid-range watch brands to debut in recent years. It’s all about those one of a kind designs, which somehow exude both futuristic and vintage vibes at the same time. Take, for example, the Industrial Engines Automatic P3-3. This sporty stunner conjures associations with vintage racing dashboards and classic movements. Meanwhile, the boxy design and unconventional layout are strikingly original, giving the piece a forward-thinking edge. Pair all that with a modest SevenFriday watch price tag, sees many favourable SevenFriday reviews online. Customers enjoy rocking a truly distinct watch that everyone asks about. 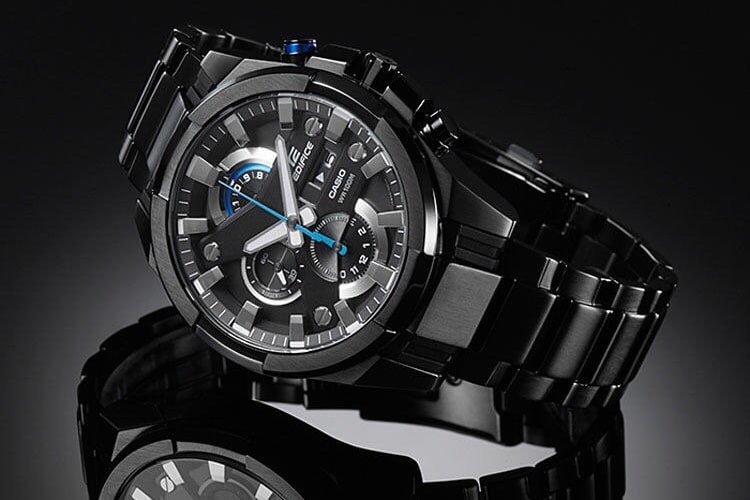 Casio subsidiary Edifice flexes its innovative muscles to striking results. Their multi-function chronographs employ cutting edge technologies to keep pace with (or occasionally outpace) today’s rapidly changing electronic world. Many of these mid-range watches employ computerised movements and run on Tough Solar chargeable batteries. Meanwhile, some of the more sophisticated entries are “Waveceptors”, meaning they can use radio waves to calibrate with atomic clocks. No matter which model you choose, expect prime innovation, top-shelf precision and elaborate but nevertheless approachable designs. 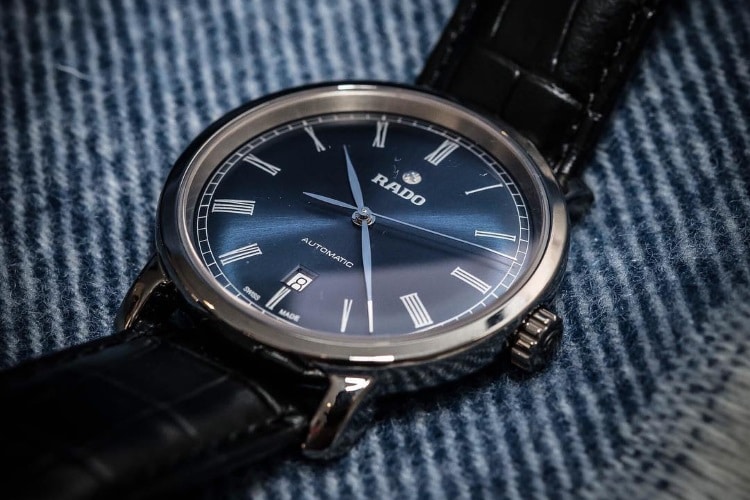 Switzerland’s RADO consistently fuses elegant designs with extraordinary materials like high tech ceramic and sapphire crystal. The top mid-tier watchmaker, Rado Watches, recently turned heads at Baselworld 2017 with the new DiaMaster Power Reserve as well as the glitzy limited edition True Blaze. Tradition meets innovation with the Hyperchrome Captain Cook  Automatic, an original look brought to life with a new and improved form for the 21st century. Ultimately, RADO makes sleek, sturdy and beautiful timepieces that look like they should cost far more than they actually do. The Rado watch price is arguably its best feature. Buy one and prepare to fall in love. Edox watches began when a brilliant Swiss watchmaker presented a handmade pocket watch to his wife in 1884. She was so impressed she convinced him to start a business. Her instincts were dead-on because it’s been (more or less) smooth sailing for Edox ever since, a remarkable feat given the ups and downs of horology. The stellar mid-tier watch brand stays in the game by championing technologies as they emerge and not over-extending itself in the process. Their 1970 Geoscope watch was the first to cover every time zone at once. Their 1998 Les Bémonts Ultra Slim collection remains the thinnest calendar watch in the world. Positive Edox watch reviews and current partnerships within the car and boat racing industries equate to exceptional timepieces that duly keep the momentum going strong. 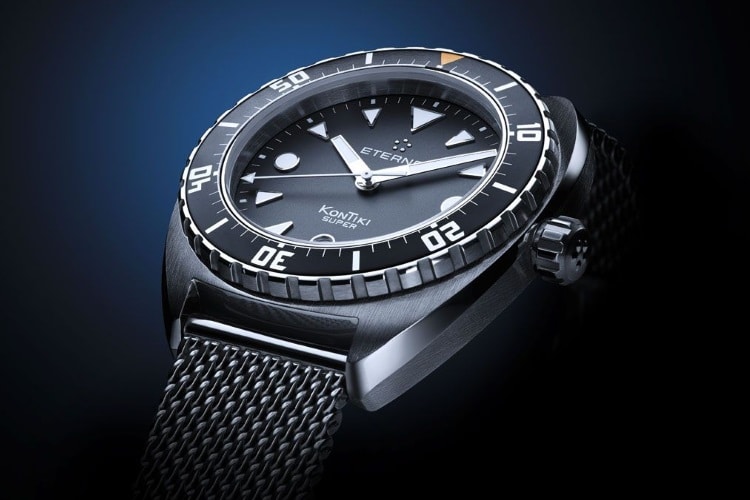 Swiss luxury watch brand Eterna has a small legion of milestones under its belt. Some (but not all) of Eterna Watches achievements include: the first watch to be built entirely in-house in 1870, the patent for the first wrist alarm clock in 1908, and the creation of the friction-reducing ball-bearing mounted rotor system in 1948 still commonly used to this day. And that’s just the tip of the iceberg. Check out the unique Eterna Matic range and the Soleure Moonphase Chronograph for next-level functionality at a completely reasonable price. Eterna produce some of the best mid-range watches in the world. In 1969, Japan’s Seiko introduced the first production quartz watch and changed the game overnight. But that revolutionary innovation didn’t come out of nowhere. Seiko (which translates to “exquisite” or “success”) was making clocks under the name Seikosha as early as 1892. Pair that valuable experience with Japan’s flair for innovation and it’s only natural that you end up changing the world. Nowadays, Seiko Men’s & Women’s watches maintain a full spectrum of styles that employ various types of movements. The Seiko SARB017 is an excellent field watch designed to inspire awe, while Seiko Divers Watches (as pictured) are very popular not only for diving but, for everyday use. Within their portfolio (and among their subsidiary brands) you can find quartz, mechanical, solar and kinetic watches. Meanwhile, some of their luxury pieces are still produced entirely in-house. In other words, to explore Seiko and their respective branches is to explore virtually all possibilities and designs, quite often at unbeatable prices. 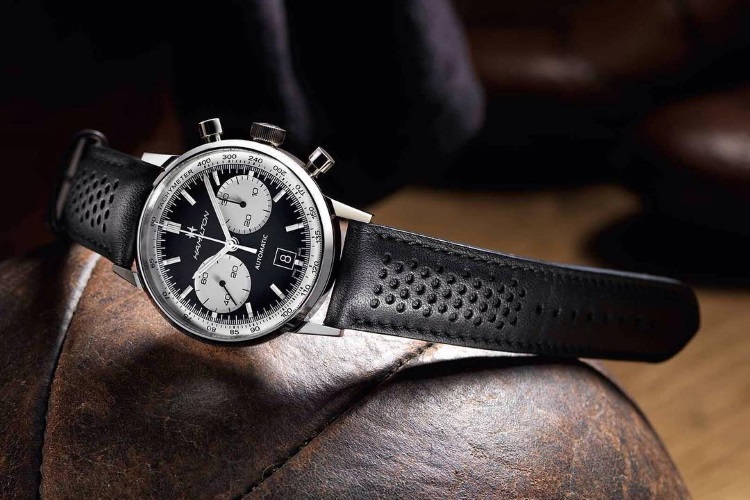 As one of the top mid-range watch brands, Hamilton watches combine the best of two worlds: America and Switzerland. That means watches that are palpably American in spirit and design, but run on the finest in Swiss mechanics. Along with achievements in the world of horology, the brand has left a substantial mark on the film, military, racing and aviation industries. Hamilton pocket watches are very popular, renowned for their luxury and vintage styling. The Hamilton Murph field watch was worn by Mathew McConaughey and Jessica Chastain in the Christopher Nolan’s hit sci-fi film, Interstellar. The Murph was specifically made for the film, named after the character Murph Cooper. Needless to say, Hamilton watches delivers not just a downright spectacular product, but every timepiece feels like history in the making, possibly because many of them are. Hamilton is one of the best mid-range watch brands in the market. 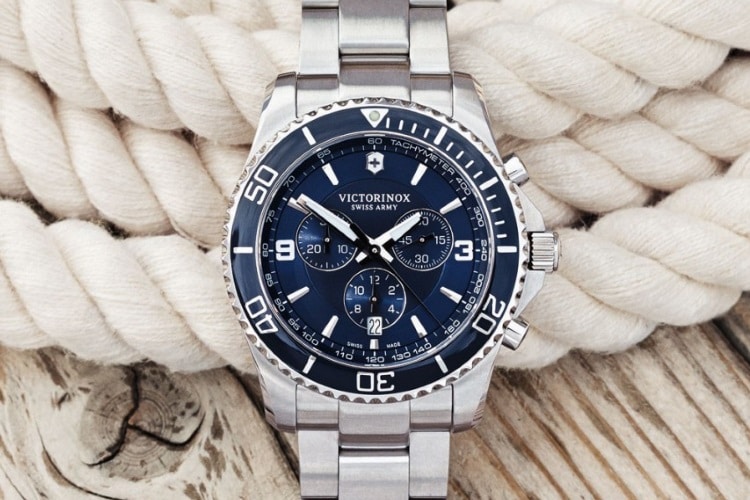 Victorinox is the maker of Swiss Army knives (and products) and their watches duly maintain the company’s high standards of precision while tossing copious amounts of visual appeal into the mix. These brilliant mid-range Victorinox Swiss Army watches are effortlessly functional, sharp in design and ready for any terrain. As such they exude the utmost masculine appeal and sleek style. Take the acclaimed I.N.O.X Titanium 43mm for example. Made from durable, lightweight titanium and hosting all sorts of irresistible specs, it’s a watch built for literally any setting. Take it into the jungle and the natives will gather around it. Take it to the bar and watch it draw eyeballs from across the room. The best part? At a price range of $300-$600, it’s a steal.

If you don’t see something you like (or can afford) above, be sure to also check out our list of Best Minimalist Watches and Best Watches Under $50

You may also like:
The Wind Up – Watch News
40 Best Minimalist Watches for Men
50 Best Watches Under $500